Giving up on Arkansas Black

Well Everyone,
I think I am tired of my Arkansas black apple tree. The apples only ripen every few years here before the freezes come. I have decided that I don’t really like it that much anymore anyway. Planning to graft it over to something else.
Just venting

Oh dear! I just finally successfully grafted Arkansas Black onto a couple trees this year. Most of my graft choices have been from recommendations of people on here. Most have been winners so far. I guess if one only has a branch or two of any particular kind, it isn’t the end of the world of it doesn’t pan out as expected.

Arkansas Black might be pushing it in Minnesota, but in Kentucky…they tree ripen before first frost most years…even get stolen by varmints before ripe some years.

If picked before ripe, they’d have a better chance keeping past December.

I am in zone 6a in MIchigan. Here the Arkansas Blacks rarely ripened and even after storage usually were still starchy.

I grow over 100 varieties here in zone 7b of northern Arizona. Less than half have started fruiting but the Arkansas Black was probably my favorite of the bunch. Very firm which I like but you have to have some sturdy teeth. The flavor of the apple was top notch though. Like a sweeter, firmer stayman. With less acidity. I’m in love with this apple. Probably the best I’ve ever had, and that’s fresh off the tree with no storage even! Definitely not what I was expecting from what I’ve read about it’s characteristics. Also have to comment that with zero sprays and almost no fertilizer this small tree made 10 or 12 huge black apples with nearly no coddling moth damage. Most of the other apples had heavy worms. Fruited after only 2 years on antonovka on a 1 year old tree. Was expecting a much longer wait. That’s just my experience with it. Here in the hot summers it’s exceptional.

It’s all about location. My mother grew up on Arkansas Black apples. They are revered in the area she is from as the greatest of all trees. People use them there for their winter food supply. They keep into the following spring with no special effort. My mother quickly pointed out not all Arkansas Black’s are the ones she grew up eating. At first I didn’t understand but she is speaking about the color and hardness. She said in that part of the world they are blacker and harder. I point this out because Arkansas black is like Kieffer there are a lot of black apples sold as Arkansas black. An Arkansas black should be ripe in October or November. Is the flesh yellow or white? The fakes are white flesh the real is yellow flesh. How do I know you might ask and it’s because my family ate the originals is how I know Arkansas Black Apple - Encyclopedia of Arkansas 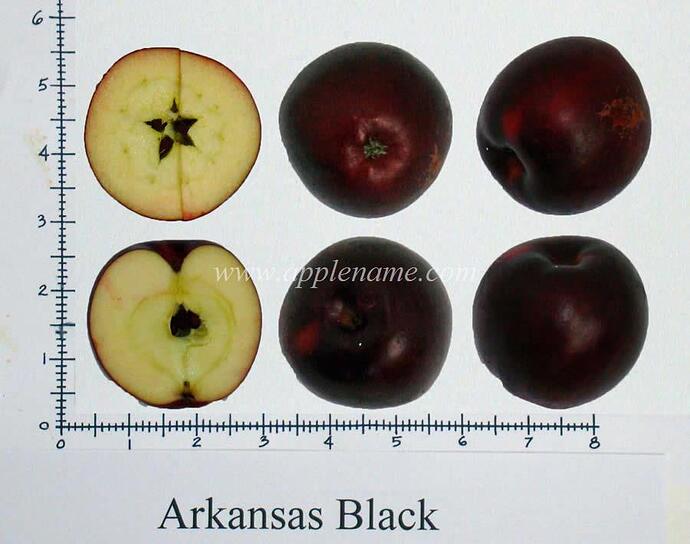 I have seen here that a couple sports exist

So it is possible the fakes are truly the real tree too, just not the ones that are best to grow. I’ll be curious to see which one I ended up with.

Yes the fakes could absolutely be sports. It’s important to know this though because many complaints I hear are not about the real Arkansas black which I question would grow in many climates people tell me it’s growing in. I’m eating a spur type which is a great black apple but it’s not the original Arkansas black. Have a so called seedless concord grape growing that is absolutely got nothing to do with concord grapes. Like the grape but it’s not concord.

They consistently ripen in my Z6 and are a very nice version of Winesap, though not as rich and certainly not as sweet as King David which has at least temporarily made my list of top 10 apples to grow- it was so good this year, actually tied for number one with Rush and Spitz. I believe it will be my chosen Winesap type in the future. It ripens a couple weeks before either Winesap or Ark Black. It probably has been bypassed by commercial growers because of it small size, which I happen to like. I have Jonagolds and Fortune apples well over a pound this year and what are you supposed to do with half eaten apples?

As far as Ark Black, it just became a good apple off the tree in the last week, which shows how late it is, but it’s supposed to ripen when picked a bit early if stored in the fridge for a few weeks.

Pink Lady still isn’t ripe but most of my Rush apples are. It isn’t a particularly early or late ripening year, but later flowering varieties are late because a warm early spring suddenly changed into a cool wet one. I have never seen anything like it, with Jonagold apples on the same branch 2-3 weeks apart in reaching ripeness, green and red apples along side each other. Presumably the green ones are from later blooming flowers. They probably won’t get adequately ripe this year which has never happened with Jonagold anywhere I manage it before. However, if I pick and store them they may be my best Jonagolds in a couple of months. Jonagolds only store well when picked early, based on my very limited experience in storing them and studying results.

Adam’s version of an Early Pink Lady does ripen before the original and is a very nice and extraordinarily beautiful apple. It is also very precocious and easy to grow aside from apparent high vulnerability to scab. Ark Black is also stunning but in an entirely different way- its near black color. Some of the Jonathans in my nursery this year had similar extremely dark color.

Incidentally, I believe the future holds a prevalence of Novembers that will allow late ripening of apples here. I currently believe that if the trees still have healthy leaves they continue to ripen and you needn’t harvest before temps dip below somewhere in the mid-20’sF. How resistant they are to freeze damage is probably affected by how high their brix, but this is not a researched issue and the literature is pretty mute on the subject. I’ve had Goldrush apples hold their hard texture with temps as low as 24F.

Trees defoliated early by Mars. leaf blotch will not benefit from the extending ripening season, IMO.

I’m very glad you posted your experience. Arkansas Black was on my list for grafting. I may scratch it off the list since I am in your area.

Is you tree pruned reasonably open and is it in full sun? Fruit on vigorous trees also ripen later than when trees have less vigor although summer pruning can help.

Hello Everyone
Thanks for the insight. The tree is pruned reasonably well and it is in full sun.
These apples have yellow flesh but the skin is not quite as dark as other Arkansas Blacks I have seen. I think what I have is a sport. I think I bought this tree from Vintage Virginia Apples but not sure.
Something interesting is that a small commercial orchard down the road from me grows Arkansas Black and theirs always seem to ripen in time.
I’m not sure what I will do at this time. Maybe graft it over to King David, maybe something else. We will see.

Mine are in storage and I’ve had a few already. I don’t care for the thick skin but the apple was good with a strong brix. I picked them about 2 weeks ago in 6b.

Maybe see if you can get scion wood from the orchard down the road and re-graft a portion of the tree to see if it makes a difference?

Besides the problems with my tree, I am just kind of tired of this variety (even the ones the other orchard grows). I think I just want to graft it over to something else.

There are just a few others to choose from.

Wondering what you mean by that? I could graft it over to anything

That’s what I meant, sorry for the jest. At the very least you have a well developed rootstock and won’t lose much time.

Ok. Sorry I am dense sometimes and missed the jest