Gourds-b-gone: What's happening to my gourds?

I’m growing bottle gourds (Lagenaria) this year, and running into a problem. I’m getting excellent fruit set, but about 90% of the gourds that set stall out and go through the progression in the photos below. Most of them stall out right after the pollination phase, but some will size up a little before they start to go downhill. I’m pretty positive it’s not a water or fertility issue. My prime suspect is the little bug in the last two photos (apologies for the sasquatch quality photo, it was the best I could manage). Does that sound plausible? Or is there some other cause that I could address? 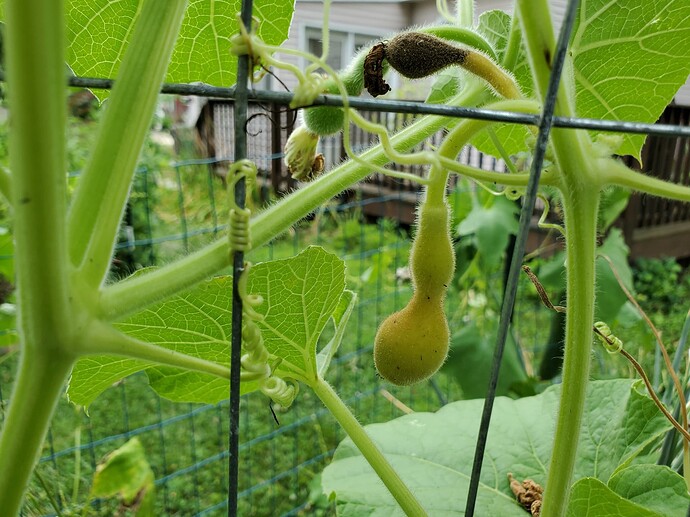 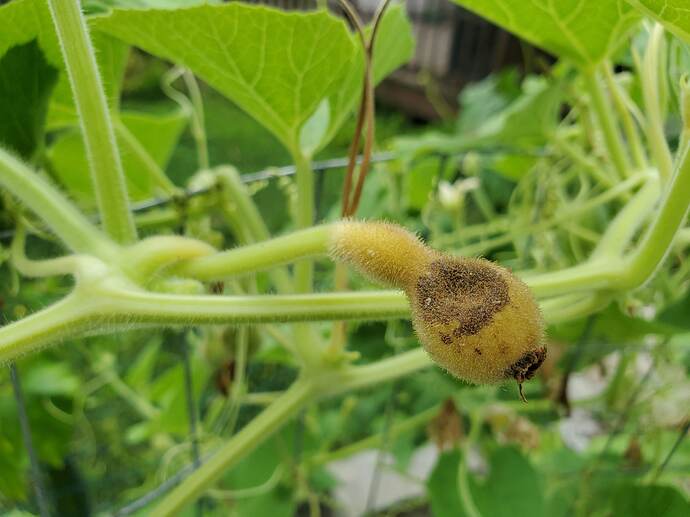 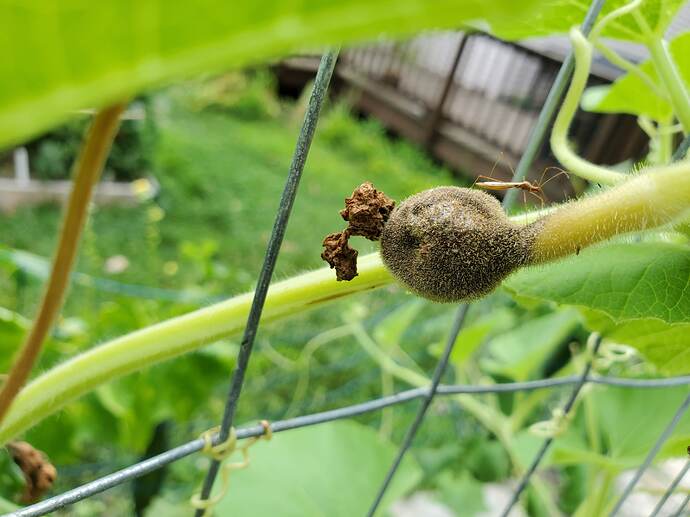 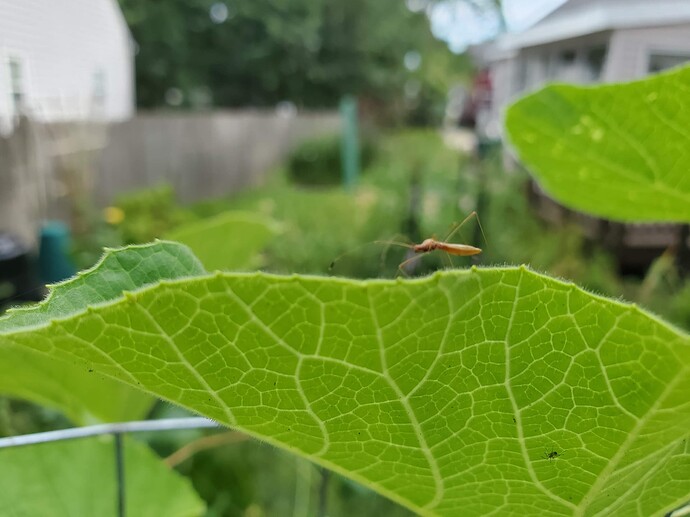 The most common thing here that looks similar to what you have is , I believe , a Botrytis infection in the blossom that moves on into the fruit . Your first picture is typically the progression of that .
However, your second picture shows “it” starting in the middle of the fruit ,not connected to the blossom end . ( not typical of Botrytis , end rot ? , but possible if wounded there.)
Other possibilities…
Some may say calcium is out of wack .
As with blossom end rot on tomatoes is thought to be related to calcium deficiency.
Not so much calcium is lacking in the soil, there is thought to be a relationship between moisture and calcium ,Such that a steady state of moisture is beneficial, to help prevent blossom end rot.
Lots of mulch and even watering helps keep Soil moisture at a steady state.
Some would suggest calcium sprays , / , soil addition s.
? .
.
I would look at it like , is this ok ? … 10% out of a hundred. Is still a lot ! .?… 10 gourds on A vine ,that sounds good !
90% loss ?,… or 10% gain !
Hummmm. ?
I , this year , bought 3 different lots of bird house gourds seed .
From three different Internet vendors.
Not necessarily with a good reputation.
Zero plants have come up.
My old gourds full of seeds won’t sprout either …
And my bluebirds are looking really worried.
You are far ahead of me , ‘this year on gourds.
Good luck .!
If you have a extra handful of seeds next spring I would love that.! As would the local birds …
.
Add an edit.
The Sasquatch photo …?
I think is a assassin bug,
While it may look suspicious, May just be doing a good job being a predator
.
Also should add that maybe none of the above are relevant to your situation.? …just some thoughts …

I’ve grown them a few times in my community garden plot (Kikinda competition gourd was the specific variety) and I would see those bugs on them and they didn’t really seem to do any harm. Generally, particularly earlier in the year, pollination was an issue and I am seeing that in other people’s bottle gourds in the garden this year as well. They are night blooming and in my experience don’t really seem to use the same pollinators, so I usually have to hand pollinate to get fruit. Surprisingly, later in the season, they seem to start setting okay on their own, so maybe a particular pollinator they need is around then but not so much earlier in the season.

Right before dark and then also at daybreak, I pick off some open male blooms, peel off all the petals to expose the pollen, and then rub that against the bits in the female flowers.

By the way, while you are waiting for fruit, you may want to try eating some of the young leaves and tender ends of the growing tips. Sautee them like any green, but they are particularly good in curries and stews.

Those are good thoughts. It has been very dry here; I’m keeping up with the watering but it might not be consistent enough. And I have a documented Ca deficiency. That was hopefully addressed by the lime application last fall, but you never know.

Right now, I’ve got maybe 4 gourds that look like they’ll make it. Hopefully if more start setting as @zendog suggests (either by natural pollination or artificial), they’ll still have time to ripen.

In my experience only a tiny amount of flowers successfully set fruit.

Non-pollinated fruit also looks like that. Those do best if you hand-pollinate.

Another vote for pollination! That does seem plausible. I’d thought it wasn’t the case since some of the fruits would start to size up and then go downhill, but that could just be a different issue that looks similar. It may be too late in the season for any new fruit to mature before frost, but I’ll have to try some hand pollination and see what happens.

I have noticed the local hummingbirds like to visit the gourd blooms in the evening. I’m not sure how effective they are at pollinating them, but at least something is stopping by!

@ampersand I’ll have to check Bradshaw’s out. I’m a big fan of SESE.