Grafting dummy question: What can be grafted to plum tree?(Pruned pictures attached)

Hi again, I am not "“new to grafting”, I am “never to grafting”, so please excuse my lack of knowledge in this topic. So here is the story. I have a very vigorous Green Gage plum tree, 8 years old that didn’t bring me a single plum yet. It flowers, but it is just 5-10 flowers for whole tree, and never even form plums. So my idea was to remove it this spring, plant new peach in its place next year, and after it starts producing remove the old peach tree that about 9 yeas old now and empty the spot for next adventure. But looks like my husband is really against removing still alive tree, both, plum and old peach tree. But to keep the plum just to prune it whole summer long - no, thank you. So, may be if I try to graft it - I will kill it(very likely) and will have my rights to say - “see, it’s dead”. But if there is a small chance I can do something with this tree by grafting, I want to try. Here are some pictures of it. Whole tree: 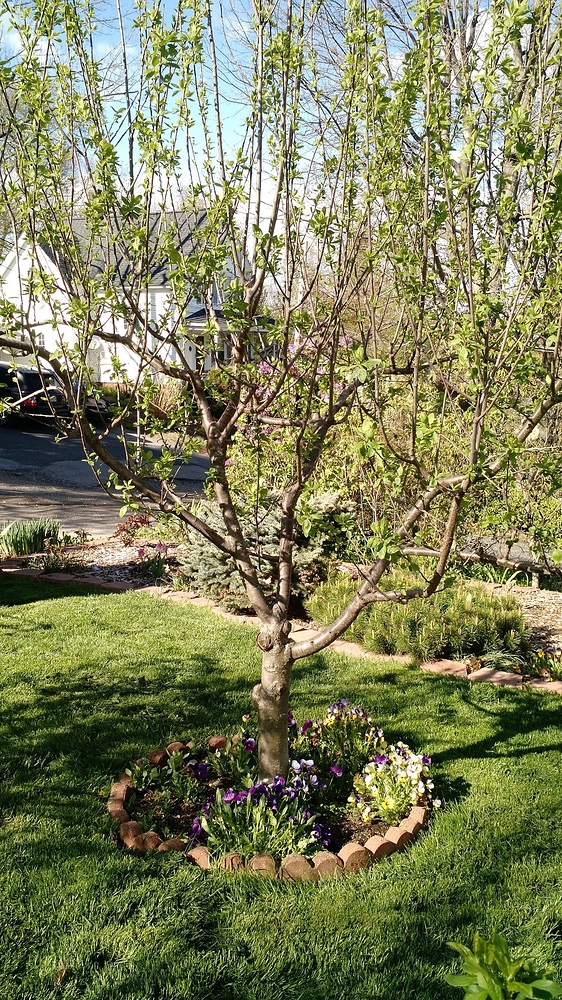 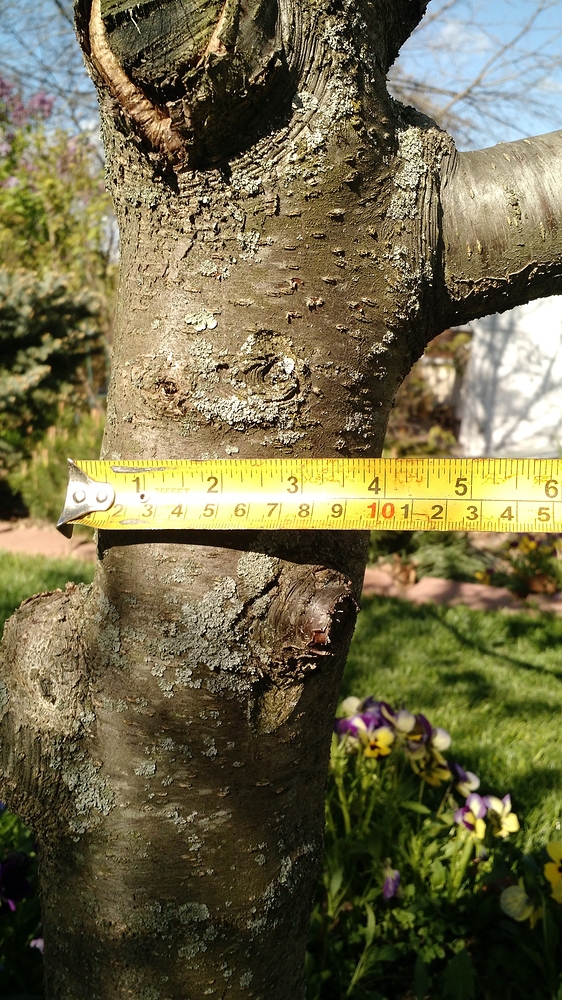 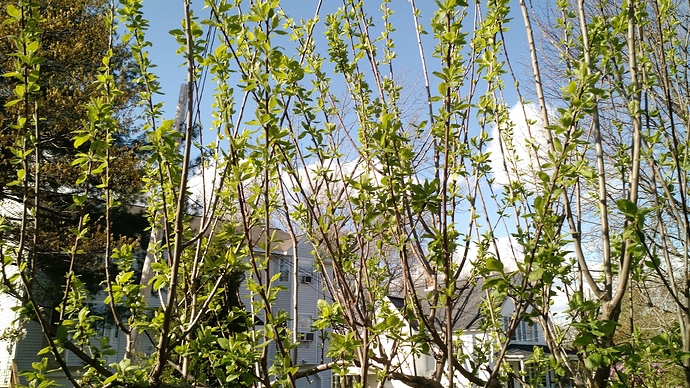 IMG_20160508_163918645.jpg3328×1872 2.81 MB
Tree has 3 main branches about 2 inch diameter each. I want to keep it 6-7’ tall, 8-10 wide, but every year it adds at least 4-5 foot of new grows, going strait up. I tied the main branches down when they were young, so they in kind of spread position, but the vertical shoots just coming up from them every few inches. The tree also had black knot fungus for several years, though I do not see it yet this year. So this is what I have to work with.
Now, about what can be done. Please, do not give me to much choices) I wouldn’t be able to choose - just tell me what would you do if it would be your tree.

galinas,
I really like your tree.It’s kind of surprising that there are no fruit yet.
Of your question choices,number 3 is the one I’d go with first and then maybe show another picture when that is done.
Whether we like to or not,pruning is usually an ongoing job when growing fruit.I drive past so many fruit trees that are overgrown and wonder why aren’t they being maintained?
Questions number 2 and 4.For sure,just about any European Plum and multiple varieties and there are some wonderful tasting ones.Oh yeah,grafting won’t do very much harm.
Why kill the tree? Brady

Galina,
Yes, you can graft as many scionwood on your tree as you want.
I will only graft E uropean plums on it
I would move some branches totally off (pruning cut), some just a few feet off (heading cut), and some I would bend them down.
You have to decide which ones to do what, so your tree will be balanced and open.
I use cleft graft on every graft. With this technique, you do not need good fine motor skill and it allows both of your hands free during wrapping, the important factor for new grafters.

Mamuang, i will need your help. Can you help me to prune it properly and then graft? May be you even can share some E. plum wood, if you have one worse growing… Shoot me an email if you can be so kind)

Brady, my yard is so small, that to have a tree that gives nothing and overpower the rest of my pack is just unwise. Some when in other life, when I have a space for 100 trees, I will let them all be and work on them, if they do not do what I need.
But that is in another life

. For now I stack with 6000 sq foot including house and so on, and my first priority is veggies…

Galina, as far as I know you can graft only European plums on European plums. Asian plums, pluots, and apricots are said to have long term incompatibility problems, they grow too fast. But you still can try, there is a chance that they can grow for you.
There are two ways to graft a big tree. The first one is to remove the thick branches and then bark graft them. I have no experience in this method. The second one is the remove the thick branches this spring and to let the suckers grow from them. During the summer you will prune them again and spread them, to prepare for the grafting. Then you will do cleft or wip and tongue grafts on one year old wood. The second way is what I prefer myself.
As for grafting, it is not so hard. Cleft is the easiest to do, whip and tongue is the best. It is not that hard really, you just need to practice. You can practice during the summer on your old tree, before you actually start to graft.
There might be some leftover scions left from the members of the forum. I grafted a lot of plums this spring, but they will be too small to give scionwood for the next season. Bob Purvis orchard sells plenty of plum scionwood, I would recommend him.
By the way I am from Russia too. It is great to have another member of the forum from my country.

In my experience Greengage doesn’t set very heavy in the best of years. I’ve thought about taking mine out, but have kept it because I don’t have very many plums here at the house and perhaps it helps as a pollenizer.

In the best year, I’ve probably only picked a bushel off the tree. Most years more like 1/2 bushel.

Over the years, I’ve read about backyard growers having a ton of problems w/ Gage type plums. Mostly lack of precociousness and low yielding, but also splits and rot.

My problem has mostly been low yield. They are very good tasting plum, and most people I’ve sold them to want more. Rosy Gage is a much heavier and more consistent producer. It tastes almost as good as Greengage.

I don’t know why your Greengage hasn’t bloomed much. Mine blooms light, but the fruit set is the main problem.

I wonder if it is something related to the vigor of the tree. I notice the leaves on your tree don’t look highly vigorous. Maybe it’s just the stage of growth, but the leaves on my tree seem to be thicker. I have to prune this tree at least once during the growing season because of high vigor, to keep it in check (most times twice). 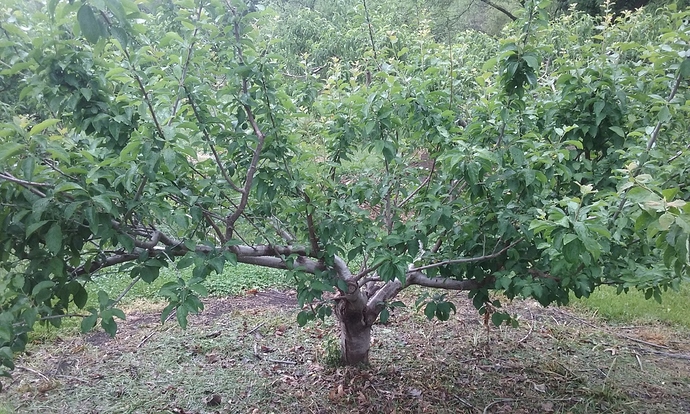 This year we got a severe freeze in our backyard and all plums suffered. I think only a couple fruits survived on this Greengage. 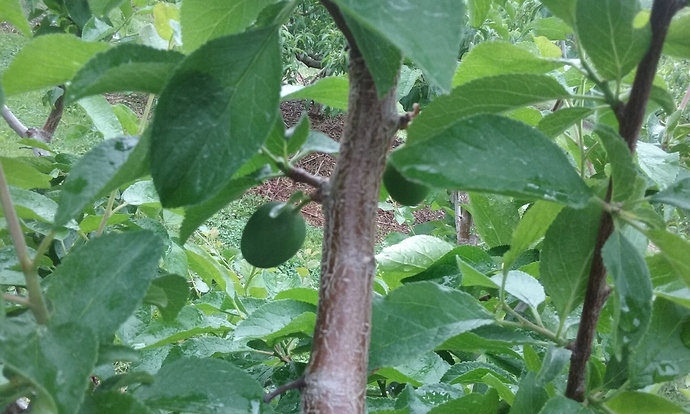 Olpea, what is your location? I am in zone 5B, Worcester, MA, and the leaves just kind of starting out, the sour cherry just finished blooming. Normally they will look the same as youth, and summer grows is enormous. I think you made my decision. The tree will go… I have one prune type plum tree - I hope it will start producing next year… I guess in my growing conditions I have to stick with what gives you at least something to pick.

You can grow green gage there and perhaps the problem is your manner of pruning. But you also may not have an actual GG if you didn’t buy it from Cummins or a similarly reliable supplier. It is the most fraud inspiring plum I know of.

It is not the most reliable E. plum and, from my experience, requires almost dawn to dusk sun to achieve the high quality that makes the French rave about it, but I’ve seen it perform reliably with good crops at the right sites.

My own GG is just a bit challenged for morning and PM sun and the quality is not that good,even though the Valor next to it produces excellent fruit. From another site I manage it it is extremely rich and tasty with over 20 brix. That site is a bit north of mine and up high on a hill with full exposure- more a Z5 than 6, probably.

Thanks, Alan. One more vote for tree to go… I bought it in local nursery, potted. Bought it because I wanted to buy Stanley and the tag said it needs pollinator, and Green Gage is the one. Yeah, right… They even flowered in different time. Stanley is now few years gone due to root rot, but it was producing all the years it was in my yard. GG still gives few flowers a year and no plums. And conditions here is far from perfect, I guess I need a less picky tree.

Galina,
If you want to grow one Euro plum, Alan has recommended Castleton. I bought it from Cummin in 2014. It has grown well and probably better, had I not move it to a sunnier location. It had two blooms this year, not sure if they will stay.

It may have had more flowers, had I not moved it. I am confident that it will fruit next year.

Someone care to explain the differences between euro and asian plums from a taste, texture, growth standpoint? I don’t know that I’ve ever actually tasted a European plum before. As they sweeter? More complex? Softer?

To tell you the truth - I am not that picky about what plum to eat. I know i wanted prunes to preserve and dry. The rest - was just something to pollinate it with… With that tiny space for trees I have to have more then one of a kind is a squander. Now I have one that is self-pollinated (Mt Royal), so I will just remove that GG tree, despite my DH likes or dislikes…

I forgot that you have a Mt. Royal. It is a Euro plum. If you want to graft other Euro plum that I have, let me know.

I am limited on space, too. I think grafting is a great way to add new varieties to our existing trees. I can help you with that.

I think that any decent plum you can get to grow well will be better than anything you can buy from a typical grocery store- only a good local grower will have fruit that will compare to your own.

I suggest that you accept Mamuang’s offer of help. Getting your own little orcharch growing, even if it’s all in just a few trees as mine is, can be terrifically absorbing and rewarding (and frustrating and exasperating too!)

Someone care to explain the differences between euro and asian plums from a taste, texture, growth standpoint?

I imagine you could get a lot of different opinions depending on what/where/how the different Asian or Euro plums were grown.

I think I’ve only grown 1/2 dozen Asian plums, but the differences I’ve observed are that most Asian plums are clingstone. Most Euro plums are freestone. The Asians I grew had tarter skin than Euros (but Scott has said some Asians don’t have tart skin at all). Some Euros can be a little drier in the flesh than Asians (this sounds like a negative, but it’s not like they are super dry, just drier.)

The big reason I went mostly from Asian plums to Euro is because Euros bloom much later. I still have a couple Asians, and they got frosted out this year. Euros did better. I went out and pruned and thinned my rosy gage here at the house and it had quite a lot of fruit on it. Checked the green gage and even it had a few more fruit than I thought.

European plums are meatier and generally have a much higher concentration of sugar. Some of my gage-like (unknown) plums last year were over 30 brix. That’s like sorbet level of sweetness.