Has anyone grafted Juneberries (saskatoon, serviceberry) successfully? I have a many-suckered Regent that is just so-so, OK for a pass-by nibble but mostly left for the birds. We have wild juneberries which taste better but they quickly grow out of reach and are pretty scattered for picking. I was thinking of getting a better quality named variety but then wondered about graftingto some of the Regents, assuming I can get some scions.

I found this post from Lon Rombough on a 2006 NAFEX thread:
“Grafting isn’t hard, but unless you use a tree type species, the stock
will overwhelm the scion with suckers. Also, the bushes renew
themselves with those suckers. Own rooted usually does better for that
reason. When I tried grafts, the graft had to be pruned hard to keep
it putting out productive new growth, and sucker patrol was vital.
-Lon Rombough”

Maybe root grafting and burying the graft would work. Or graft to a wild seedling, but it seems keeping height down might be a challenge. Hoping someone has had experience grafting their own. Sue

I have grafted a cultivated ( un known ) variety from a mc Donald’s landscape . Onto the native A. Canadensis ? Here. Also other species.
Grafts took easily , it does want to sucker.
Graft early ,as they push growth befor most other stuff does.

Apple serviceberry, obtained from crossing Amelanchier Canadensis and Amelanchier Laevis, seem to be the best fruiting option in zone 6. It makes a 20 foot or so tree, though, and I’m not certain about hardiness. The Morton Arboretum in Illinois says zone 4. I tried Amelanchier alnifolia years ago and most of them mildewed and died. (Regent would be an example).

There is an Amalanchier Laevis in Kentucky that has a trunk 28 inches thick…and about 70 feet tall. I have a neighbor with one in the woods 14 inches thick and 72 feet tall. These are old and rare specimen, though. Usual height in wild in the forest no more than 10 to 25 feet. First tree to bloom white (before callery pears).

“Autumn Brilliance” is a named cultivar used most frequently in situations such as your McDonald’s.

(“Laevis in Kentucky that has a trunk 28 inches thick…and about 70 feet tall.”)

Wow ! I wonder how old that tree is?
Several hundred yrs. I would guess ? They are slow growers.

Amelanchier arborea is the suggested rootstock (zone 4 hardy) for grafting serviceberries. It doesn’t sucker much at all or none in the case of my ‘Autumn Brilliance’.

Maybe root grafting and burying the graft would work.

That should work, but a nearby sucker could come up fooling you. I would graft then in a year air layer the graft. Air layer seems to work on most plants, even stone fruit if done right.

@Drew51
This is exactly what I am trying.
Graft and air layer.
My air layers have been on 2yrs, — not a single root.
Maybe eventually ?
Seems like it should work.?

Also here is a good PDF:

OK well try the method for stone fruit. Girdle branch with a wire. This stimulates root hormones to form.

The PDF says cuttings should root, I would do that too.
I’m growing Honeywood and Northline. Both are young so no comments on them yet.

Think in the past, some of the named xgrandiflora cultivars were grafted on hawthorn rootstock. Suckering of the thorny understock was an issue.

That is one impressivley thorough and complete pamphlet! They are serious about disseminating practical useful info. I think I’ll have to add more juneberries. Sue
(edit) Not a pamphlet, a small book.

Those who have full grown juneberries – do you (can you) keep them moderate (no ladder) size or do they really want to be small trees? Because all I have is Regent (short) right now I somehow thought most were similarly small bush sized. I was surprised to see in the UnivSask bulletin sizes a 14-16 foot range for most varieties. I’m familiar with our tree sized native juneberries (A. arborea) of course. It would be interesting to graft to both the Regent and arborea and see what transpires size wise. I have one small arborea I found growing inside the orchard fence to play around with. I’ve yet to find a small enough one out in the woods to transplant, but i keep looking. I suppose I could try some cuttings, Sue

I would imagine amelanchier alnifolia stays under 10 feet. It’s not recommended in zones 6 or 7.

Grafting Report – I decided to get scions from USDA-NPGS. Early March I received generous lengths of the four varieties I requested, which was nice, except that most all of them were already breaking bud. But I put them in the root cellar with the other scions. The end of April I dug up some Regent root stocks, root grafted the most advanced (green buds) scion pieces, potted them up and set them for a couple weeks in the house, then stored in the root cellar until I could plant them out in May. No sign of life; the growing buds died. (our other root grafts - pear, apple, cherry - did fine).

Early May we grafted most of the scions onto a wild juneberry seedling I’d transplanted for that purpose. Most scions had growing buds, some dormant. None took. (though the weather has been more than a little abnormally wild and weird this year most all of our other regular grafts have done fine).

We also stuck several leftovers onto branches of a wild, mid sized bearing tree nearby. Two took and are growing.

Then there is the one “special” graft. I’d bought a batch of small juneberry seedlings from the SCD last year along with some other bushes for a windbreak. I put one in the orchard to graft a single variety - a Thiessen. The seedlings including this one all grew well and I didn’t pay much attention to them. I chose the best NPGS scion that had several dormant buds (along with several growing) to graft on this one and it has grown well, nicely vigorous. The root stock is also healthy and the one nurse branch I left below the graft is growing well, too. Now these “juneberry” seedlings from the SCD grew well all last year, came through winter fine, and growing nicely this year. I’ve looked at them, weeded, mulched and though this is really embarrassing, it was just today that I realized – those aren’t juneberries. I know what juneberries look like, we have them all over. These weren’t them.They grew and were healthy and that’s all I had noticed!

The leaves sort of looked like elderberries (but aren’t) but I couldn’t place them. So I looked at what else the SCD offered that year, and there it was - American Mountain Ash. Sigh. This isn’t something I would have chosen to plant but I now have ten of them out and about. Could be worse I guess (we did plant Autumn Olive some 40 years ago, also from the SCD!). So I now have a juneberry grafted and growing on a mountain ash. I looked online to see if I could find anyone else who had and came across this from Lee Reich on an old NAFEX post:

“Grafting has not been a very satisfactory method of juneberry propagation. Grafts often take on rootstocks of other genera, such as mountain ash, hawthorn, and other members of the rose family, but the grafted plants sometimes stop growing. … ”

I hope it makes it through this year so I can cut a scion to try grafting to another REAL native juneberry seedling next year. Turned out to be more of an experiment than i thought! Sue 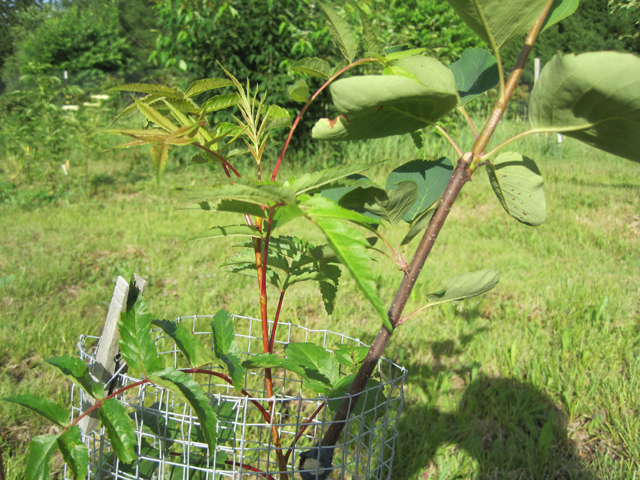