Grafting onto a very old pear

I bought my house about three years ago now and it came with two very old and very large pear trees. My neighbor was here a year or two before I and knows it produced very nice pears in the D’Anjou family. The last two springs have seen late frosts destry both flower and leaf. I saw and sampled pears when I was shopping for the house.
One of the trees has significant damage, and both are large enough where I could never get to most fruit. My intent is to stage that one down and cleft/bark graft multiple pears onto each of its major branch stumps. Two of the three primary branches came down today and the most damaged came down last spring after the second set of leaves was killed.
As I chopped up the limbs, I noticed one branch had rather nice looking scion wood -albeit a bit thin- on it and collected about six pieces, as it would be nice to have part of the rejuvenation be its younger self. I went back out to look for more and find that most of the green wood is very short spurs, as in an inch or so, but that here is a bit more healthy young wood of a more reddish hue that is more appropriate thickness for grafts. some of these terminate in a callus and some have a callus between it and one of the tiny green spurs. It very rarely has branching, and trends about 18 inches long.
My query is this: is this reddish wood also last year’s growth, with the callused area representing where the May frost killed off the original tips, or is this second year wood? If second year wood, can I successfully do anything with it? Remember that it came off felled branches.
If there is more or larger green wood, it is far higher than I can put a ladder to get to. These are certainly a European variety and are well old enough that I can see no sign of original graft or not. If it is indicative of anything, it has a very kinked up growth pattern, as if new growth tends toward a sharp angle - nearly 90 degrees - every year or so. Zone 6B, with much of it’s life leaning into 7A. Taller than my maples and as big around.

You can graft pears with second year wood. First year wood is the first choice, but you should do fine with second.

Good luck and have fun.

I’ve got a potential frost coming in a few days, after which I expect to get to this project. I’ll do fresh cuts on the two branches I felled a couple months ago, but am deliberating the third. It was the defacto lead and I’m not sure I can drop it later without threat to the grafts if I do them first. It’s leafing out better this year without the competition, but the two cut limbs have almost no suckering and show the poor leafage of last year on the couple of minor branches left. Decisions, decisions. If I could get high enough to half the remaining trunk and seal it properly, I’d be happy with the compromise. I may have to hire someone younger and smarter for that option.

Finally did this grafting over the weekend. Cut the trunks I had dropped down to their final places and ensured a slight pitch so they wouldn’t ppol water. For small grafts I usually use grafting tape and/or rubber bands, but I used a wound sealer on these. Between the two locations, there are now about eight types, including scion from itself.

Stainless or common brights should be fine -but probably not necessary. You’ve been careful and thorough and you’re working with pear.

Any chance you could post some photos? That would be interesting.

Any chance you could post some photos? That would be interesting.

The whole tree. There is a slight decline from the camera, but straight to the right of the top of the ladder (above the chainsaw is the lower set of grafts. That is about 5’ above the ground. To the right of that, the bulge, protruding out is the upper set at roughly 9’ above ground level. The tree behind (slightly left) looks shorter, but the land slopes so much that it is almost exactly the same height. This is looking east. 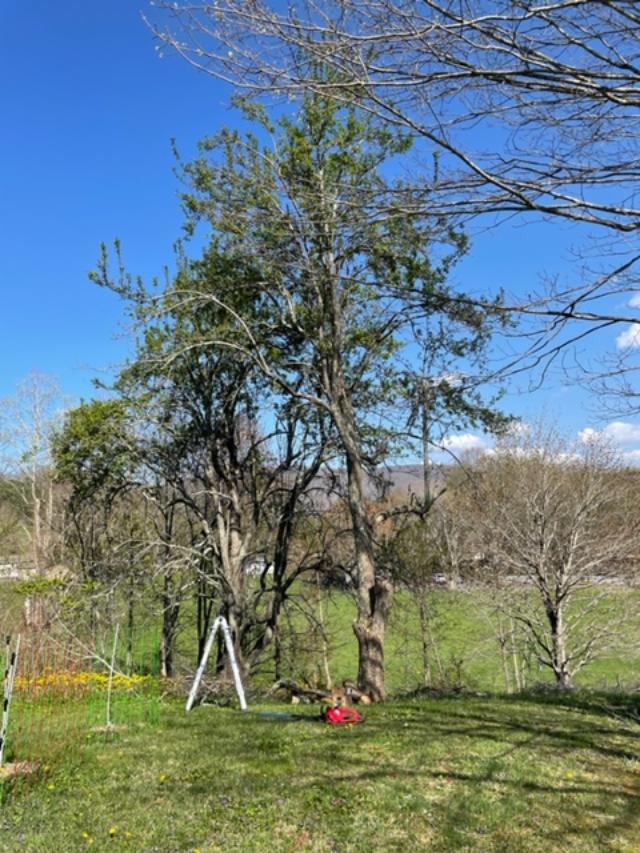 Upper set of grafts. “House” is scion from itself when the original limbs were dropped back in February. It is an unknown variety in the teardrop shaped set. Yellow-green, probably 3.5" x 3". The pictures were taken to ensure I don’t forget what is what. I don’t expect the labels will stay. 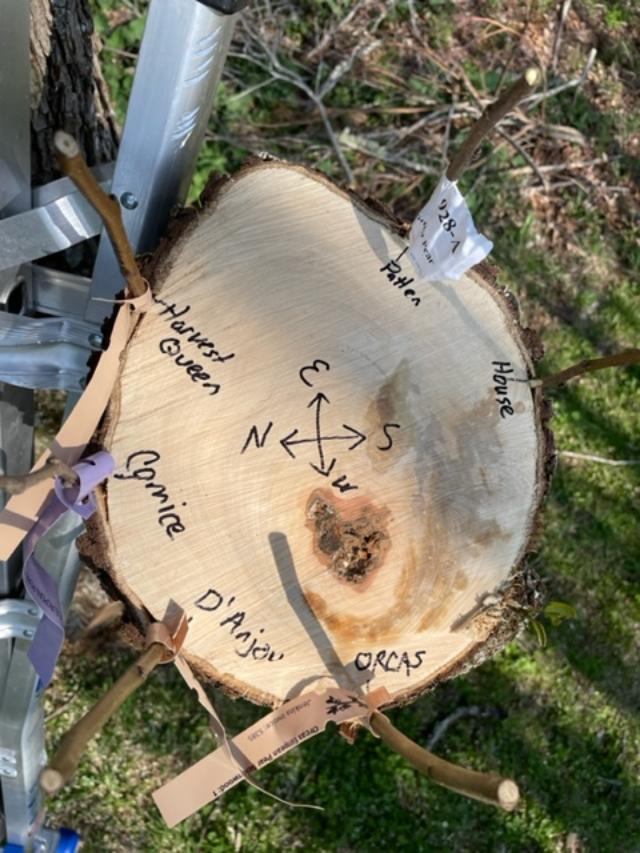 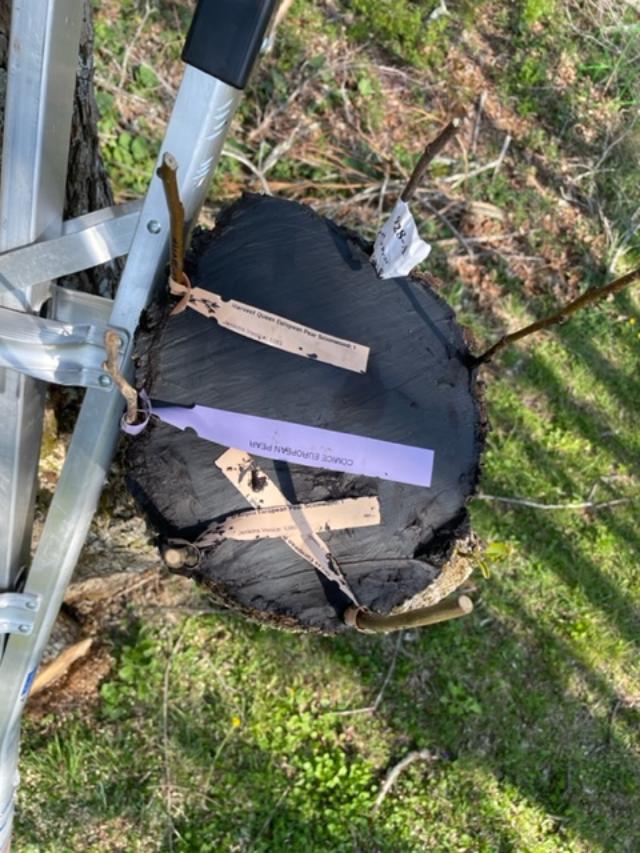 Lower set of grafts. The one I will tack in is “Rescue.” 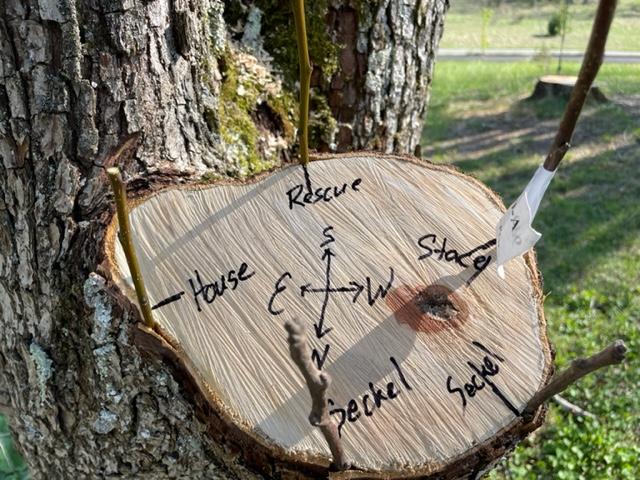 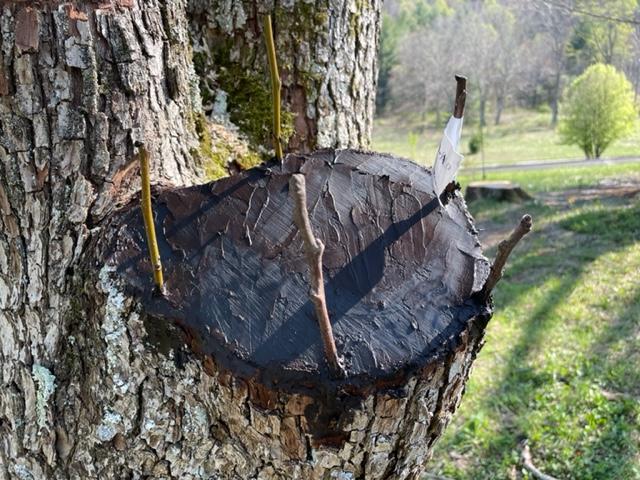 First and potentially only time I’m likely to do this type of graft, although the trunk I left has a lot of wea and tear on it that may lead me to drop it in a couple years. It is currently leafing out better than it did last year to my eye, but we had some really badly timed frost last year that led to leaf drop twice when the leaves were all only about an inch long. Very low suckering on the trunk stubs so far, so I’m hopeful these will be able to compete with the leader enough to see several take.

That looks like nice work to me. I wonder what @barkslip would say.

I’ve never done that large a stump or that many scions on a stump- but if this works well for you I might look for an excuse to try.

One thing I would suggest is that you protect the scions from drying out before they take. I wrap my scions before I graft them so that they don’t get wiggled around by wrapping. Sealing the exposed cut at the very least is essential, in my view.

I have nothing to add. There’s no stakes in place and those grafts will blow out the first time 30+ mile winds come thru. Every single one of them. The amount of vigor below (roots) is TREMENDOUS

Sealing the exposed cut at the very least is essential, in my view.

Are you saying that the sealer might not actually seal well enough for this purpose? A couple of the scion were shortened after the fotos and received the same compound. Most were not. Several of the original cuts on the tps were already sealed in multiple ways. It would have been smart to wrap them, but I didn’t even think about that.

I didn’t realize that you had already put a sealer on the tips of the scions. That should be plenty.

I think what @Barkslip is saying (correct me, buddy, if I’ve got this wrong) is that the roots are going to push your grafts to terrific growth, and they won’t be strong enough to withstand wind without stakes. The top growth is a sail; the graft union is the anchor. Big sail + small anchor = problem in wind. But he gave you the fix and it isn’t hard.

This is great content, thanks for posting your questions, progress, and pictures. Please keep updating us to the developement of your tree/grafts.
I have a much younger pear tree(~15-18’) that I have been grafting over. I did the opposite, I cut the main leader off at about 7-8’ and grafted that to Orcas and have been systematically grafting the branches to other varieties. I didn’t have to do any pruning due to damage though.
I also like your labeling system with the photos, I wish I would have taken photos of the some of my grafts. There are two branches I will have to wait until they fruit before I am positive as to the variety. As far as covering from the sun for initial take, tinfoil has always worked well for me.

Thanks guys. I had not even thought about wind effects on the growth. I am still worried about it’s effects on dessication at the moment, especially with the sun smiling directly on it at the same time.
The wind here will knock over a tomato cage in the ground regularly. I’m pretty sure I can rig up a bird cage of stakes for most of the scion. Maybe I can come up with a shade option on that that will last a week or three. It’s trying to rain presently and will remain halfway cool for a day or two.

You can also prune your shoots as the season progresses so the length is manageable in a big wind. Then keep the shorter shoots attached to some kind of protective staking. 2-3 foot shoots are a lot easier to protect than 8-10 foot. (The first year). Also birds can perch on them causing them to tear out.