Greetings,
I recently planted a lowchill peach tree (santa barbara) and I want to graft it with another tree to have some variety.
Do peaches graft well? Any suggestions on grafting?
thanks,
Steve

I’m hit or miss with peach grafting, however I had the most success with bark grafts in late April, when the weather has been warmer.

My experience and what I’ve read is that peaches and nectarines are the most difficult to graft with scions, and many advocate chip bud grafting instead for them. However, given your area, I’m guessing you’ll have less problems. My first year I got lucky with a couple on the peach and a few on the nec. The next year, nothing took. I even tried chip bud grafting, but we’ll see this spring if anything came of that.

Is the low chill Peach going to be the stock tree with another variety grafted on or the other way around?The Santa Barbara is still fairly young?That might effect the grafts being able to take,more so than if the tree were say,five years old.
I had positive results last year when using a four to five year Nectarine as a base for other ones,along with Peaches and Apricots,using mostly whip and tongue.The bigger trees can push more energy to the grafts than a smaller one.
Yes,warmer temperatures,70-80 should help. Brady

Highs around 85 and lows around 65 is about perfect for peaches. The further you get from that the worse your odds are. It takes 2-3 days of that weather after the grafting day to get things to stick. I have grafted many peach varieties, usually I get them all to take (maybe not all the scions but all the varieties), but once in awhile I strike out.

I just planted the Santa Barbara…so it is going to be the stock tree. I was going to graft another low chill peach to it just to have some variety. I believe the tree is 3 years old. However, is it a bad idea to try to graft the first year you plant a tree?
Btw…I live right on the coast and it rarely gets above 70 degrees. Will grafting not work if it never gets above 70?
thanks for helping!
steve

It’s probably not a bad idea.I kind of look at the situation like,what is good and that which is best.
I remember adding some Apricots and Nectacots scions to a number of root stocks once and none of them took.The reasons could have been multiple,from my grafting technique to the amount of heat during the callousing.
There is really no way of knowing,so maybe try a little,wait for the hottest span and wrap the whole thing in Parafilm. Brady

I don’t know about Scott’s 85 degree number, but above 70 is my benchmark- I can’t count on spring temps above 80 and have never grafted peaches in that level of heat. Peaches are not hard- I just use a simple splice graft and get a pretty good percentage take if I wait until the first warm spell after they are fully leafed out. I tried it in the '60’s last year and almost none took, but the low 70 second attempt worked fine.

For all grafting, it is harder to succeed on recently transplanted trees not yet engaged in full vigor growth. If you just purchased your tree, I suggest you wait until mid to late summer to bud graft or the following spring for simple splice.

If the high for the whole day is 85, that seems to be perfection - 85 is a little hot but the average temp for the day will be lower. That said, I probably should have clarified that going lower than 85 is better than going above. Also if the high is 80-90 you should put foil on all the scions to keep things from overheating. If the highs are only 70 I will sometimes put black tar paint on the graft union area - black to warm them up, aluminum to cool them down. This is critical for grape grafts which like it even hotter than peaches.

I use black electric tape- so maybe that is why the '70’s are not a problem- even it they did bring us disco.

Be warned that most peaches like heat to develop their full taste potential. So it isn’t just low chill you want – they also need to be able to ripen in a cool summer. Santa Barbara was the right choice for where you’re at. Others out there that will work: Red Baron, Ventura. 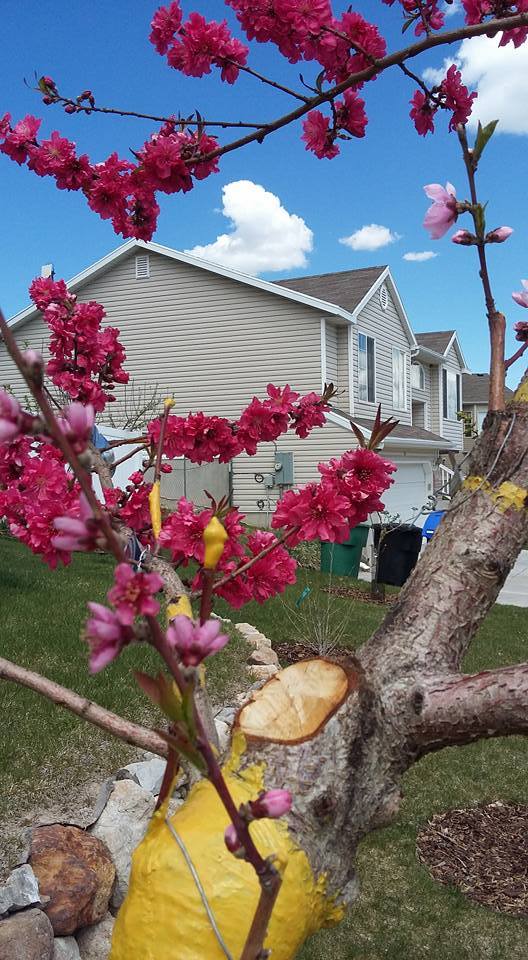 BTW, here’s my Red Baron with Arctic White Supreme in the foreground and Indian Free going up the main branch on the right. This was April 12th of last year and nothing I grafted took on this tree. Hoping for better luck this year, so thanks for the comments!