Grasshoppers! - And I don't mean the drink

How can a potential plague of them be controlled before the devastation occurs? I need suggestions, particularly ones that aren’t harmful to honey bees.

Late season last year was the first time I had an issue with them. I was catching and crunching at least one or two large ones a day. By large, I mean the size that would come in a dissecting assortment. My worry was that if there were enough of them around for me to see them that frequently, there was a good chance they’d be worse this year.

It was a very mild winter, and now it looks like they are going to be a major problem by late summer. I’m seeing multiple small grasshoppers everywhere around the property every time I go outside. What can I do now before they grow appetites voracious enough to devour every leaf within range?

You might try some Nolo grasshopper bait. I can’t say that I have a firsthand endorsement but have heard it helps.

The problem with NOLO is that the grasshoppers can recover from its infection if they can get warm enough. So in sunny areas it has limited effectiveness, except during cool cloudy periods. But if where you are is cloudy/cool, then I have heard it can be quite effective. Especially as the larger hoppers will eat smaller infected ones spreading the infection.

The problem with NOLO is that the grasshoppers can recover from its infection if they can get warm enough. So in sunny areas it has limited effectiveness,

They can be destructive as all get out. We had hoppers bad last year. I lost 3, 3 year old apples. Completely defoliated them and even chewed the bark off some of the small branches.

I think they may eat anything! I had a couple chomping down citrus leaves last year.

Drop off the free ranging birds at your neighbors so you can complain about them.

Get revenge. Stir-fry them with a little garlic and salt. They say it tastes like shrimp. 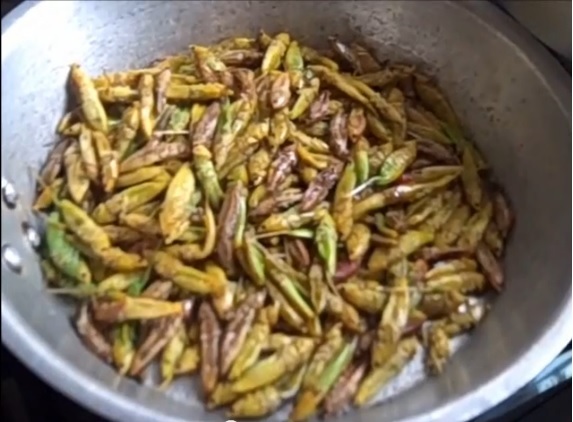 Hahaha! I’ve eaten fried grasshoppers. Crisp and tasty! I’ve also had them and ants and bees fried and chocolate covered.

The problem with these small ones is that I can’t CATCH them. I’ve only managed to crunch one out of over 20 that I’ve tried to get. That one was on my door lever at just the right height, with few directions for escape.

At this rate, I’d never get a meal out of them.

Ah, that’s because you’ve never had a proper grasshopper catcher like
https://www.youtube.com/watch?v=KeUUVJv4joU

In the early 70’s a store near us in our new mall sold chocolate covered insects. My sister bought them in an assortment box. She didn’t tell us what they were. While in the car waiting for mom to get done shopping she laughed while we ate them one at a time. We couldn’t figure out why she was laughing till they were gone. She’s the oldest, and six years older than me. I was about eight at the time.

In Kansas like Texas and Nebraska we know grasshopper problems but we have some tricks to deal with them besides turning out the poultry. One trick is we mow the grass short in between the areas they like to move because putting them in short grass makes them vulnerable to predators. They can’t move good in the morning when they are chilled so take a pale with a lid and physically remove them from the tall weeds and grasses and you will find they are easy pickings and great fish bait. Burn your garden area , fields etc. the next year to destroy their eggs. Use a propane flame thrower and ambush them in the tall weedy areas in the morning they like to use for safety and cover. They sleep high up on the green rag weeds and sunflowers. If you don’t have a location like that you can lure them in by making a location like that. Mow down everything around that location and at night they will move into that tall weedy area.

You should read the grasshopper trap by Patric f. McManus.

Hmmmm. That name is very similar to P. Mantis.

He wrote for field and stream for many years. I have several of his books. The grass hopper trap can make me laugh out loud literally.