Thus, the one on Coe’s is larger in size while the clusters are smaller. Since I don’t know when they will ripen, I’ll go with @Mrs. G’s comment. Some time in late Sept because my fruit usually ripen a week after Mrs. G.

I have a feeling that all gages taste good. I have Coe’s which I love. I also have grafts of Cambridge Gage, Reine Claude de Juillett.

I have a tree that was on my property that I’m pretty sure is green gage. Picture below are some of its fruit and some mirabelles grafted onto the same tree.

The one with the skin showing was 31 brix. These are my favorite plums. Sometimes the flesh is like jelly-candies, both in texture and sweetness.

I don’t spray, so I cut open all of my plums, and other fruit, before eating so there aren’t surprises. The juice is like syrup. 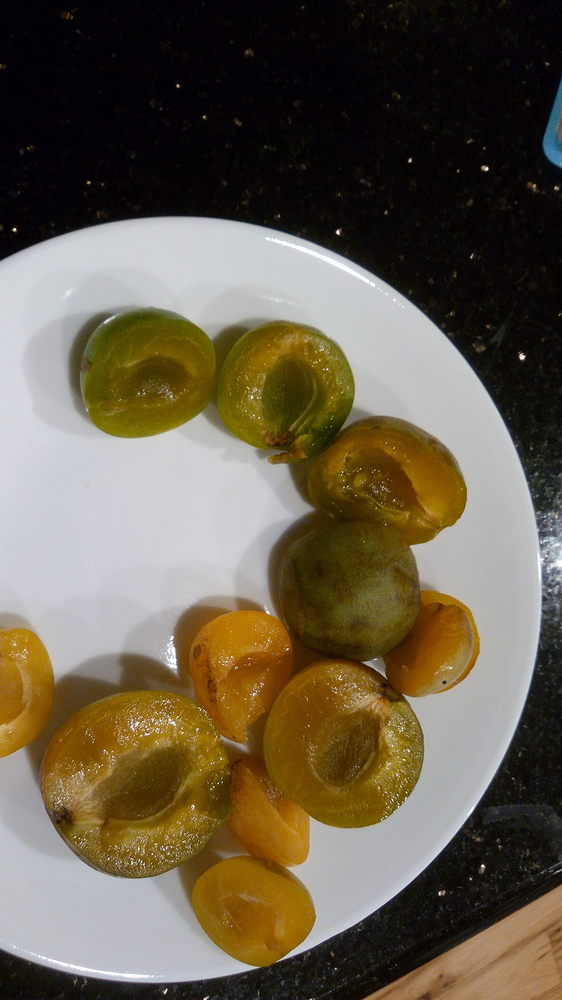 This one below, from 2015, had that lovely texture. 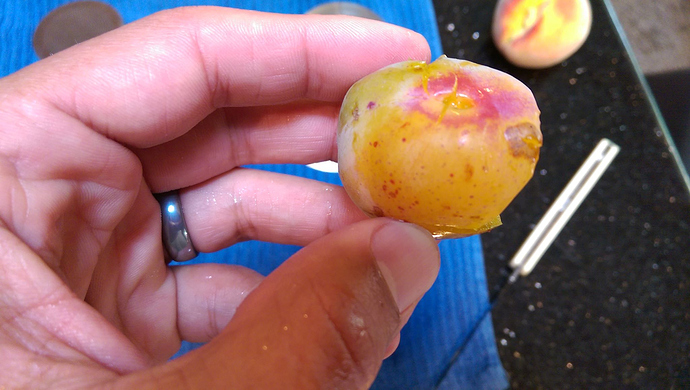 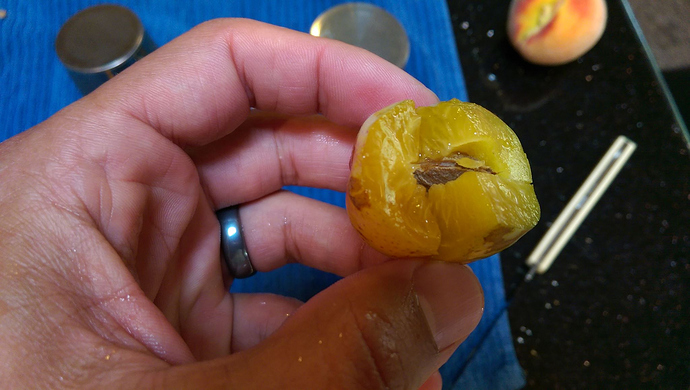 I have a feeling that all gages taste good.

A few decades ago there was a plum sold by retail nurseries (not garden depts) in southern California labeled as “Green Gage”. It was pulled after a few years because the skin was very sour – although the pulp was good. When ripe the skin was green and the interior was yellow.

It was pulled after a few years because the skin was very sour – although the pulp was good.

I don’t know when they will ripen

When my Bavay is ripe it drops. When you see that they start dropping, you can slightly pull the fruit and ripe ones will easily detach from the stem.

Thanks, Stan. That’s mostly how I do with new fruit. I bag most of my peaches and plums so it’s easy to wait until the first one drops in the bag (and not having it snatched up by bunnies, squirrels or other critters).

Thanks for sharing the pictures and the history of those gages on your Diary thread. Had Green Gage is not so stingy about its production, it’d make me a lot happier.

I’ve grown lots of plucots and ums buy the one stone fruit that impresses me is the flavor delight Aprium. Put it in full sunlight. Put snow around the base after a late winter snow, co Rd it with white plastic and keep it’s roots cooler till the last frost. I do have a Blenheim Apricot next to it put it is supposed to be self pollenating and I have a beehive. It doesn’t get fungus, it ripens on the tree and they are great to eat not too sweet birds aren’t too crazy about them, they are cling free pits and it’s a good producer. I prune it every winter and I don’t share them… that’s how good they are! Want some grafts? It’s only 8 years old and the grafts are still good sized and I will have lots as I prune at Scion harvest time.

Same for me, here in Southeastern VA. We used to get plums . . . now, if they set . . . and if they develop. And if they survive the bugs and the worms . . . Then, the squirrels, deer and whatever else sneaks up in the night - get them! My branches were denuded, too . . . like thecityman’s. Every leaf chewed back to nothing! And they were particular about it, too! Some varieties’ leaves must not be too tasty!

I put out 6 Japanese Beetle bag-traps - which were full in several days. That slowed things down a bit. But . . . it feels like a losing battle most of the time!

If it is the same GG that Cummins sold about 15 years ago it ripens soon. The beach tends to retard ripening of some things, especially later ripening fruit. It’s cooler with less direct sun.

When my Bavay is ripe it drops.

I wasn’t paying attention to my Bavay but I saw some fruits on the ground yesterday. Sure enough, they are ripening. They are excellent! This is the first year I have a non-trivial quantity, it took a long time to start fruiting and then the rots, bugs and squirrels were beating me to it. I also should have a decent harvest of Green Gage for the first time, it took me a long time on that one as I had the Millers non-GG for the first many years and then I had to move the graft of the right one just as it was getting close to fruiting.

If it is the same GG that Cummins sold about 15 years ago it ripens soon. The beach tends to retard ripening of some things, especially later ripening fruit.

My GG was sent to me by a forum member so I do not know where it was bought from.

The beach?!!! I lives in central MA, the closest beaches are about 1.5 hours drive and they are in RI

. Cape Cod is almost 2 hrs away and probably 3-4 hours away considering traffic on weekend.

Many fruit in my yard this year is later than last year. Easternglo nects ripened around 8/14 last year. This year, as of this morning, they still hang tightly on the tree. Only a groundhog picked them (everyday).

None of my E plums ripen. They turn colors but most may not ripen until mid Sept. @scottfsmith’s Bavay are dropping now. He is about 2 weeks or more ahead of me. Maybe, my Bavay could ripen the first week of Sept. One can hope.

The beach?!!! I lives in central MA, the closest beaches are about 1.5 hours drive a

I was talking about Mrs. G’s tree.

Alan, you a such a spoil-sport! Really now. My Bavay fruit is/was superb! As it turns out, I’ve been growing longer than you have too. And I haven’t been growing fruit? Just words?

All I was saying is that coastal weather retards ripening. I think you may have misunderstood me.

My bavay greengage is just finishing its third growing season. Grows in tons of full sun along with the rest of my young E plum orchard. We do not get diseases here, but we do get some insect damage from Japanese beetles. Trees are putting on lots of good growth and are now a bit taller than I am (5’8") but nothing has flowered yet. Maybe next spring!

Leslie,
5 a where?
It is important to know your location.

I only have two gage type plums . The only one that has fruited is a rosy gage. It only put on fruit after it was a full grown ten foot tall tree. The other, a coe’s golden drop,is about the size of yours but has not tried to fruit.

Your zone are a bit colder than mine. My 3 E plums are in full sun from dawn to dusk. I have bent branches to encourage early fruiting. By 3 rd year, all set fruit.

I think branch bending and lot of sun helps a great deal.

We do not get diseases here,

Say that after 5 years and I will be surprised! It takes five years around, maybe 7 sometimes for all diseases to find your orchard. And that’s 5 years after fruiting.
Also I myself would never let my trees get too tall. I keep mine at about 7 feet. They never will be taller. No ladders in my future. Backyard orchard culture pruning works so well.