Grow your own bee hotels (hint: you're already halfway there)

As people become more aware of the importance of mason bees (and others) as pollinators, there’s been a boom in the sale of bee hotels and similar devices to provide nesting spots for bees. These are actually not that great. The tight spacing makes it easy for diseases, wasps, and parasites to attack all the bee larvae. Also, you have to buy supplies to restock these hotels, and the diameters of many of the ones on the market are much too big. So what to do instead?

A better, easier approach is to leave stalks of hollow or pithy stemmed garden plants standing over the winter, then trim them back to 10 inches or so in the spring. This has several advantages. First of all, it’s free! Second, the diameters of the holes are a better range of sizes (and the range allows for different bee species to do their thing). Third, the wider spacing around the garden makes it less likely that diseases, wasps, or parasites will infest all of the nesting sites. As a bonus, many of the seed heads that adorn the tops of these stalks will feed goldfinches and other birds in the winter.

Probably the best plants for this are the members of the aster and mint families. They produce lots of flowering stalks that are sturdy and have hollow or pithy centers. Raspberry canes are another good choice (just leave your pruned stems a bit longer than normal). Really, any plant that has a stem that will last more than a season when cut and has a pithy/hollow center will do.

These are some anise hyssop stalks I cut yesterday that shows what I’m talking about really well. 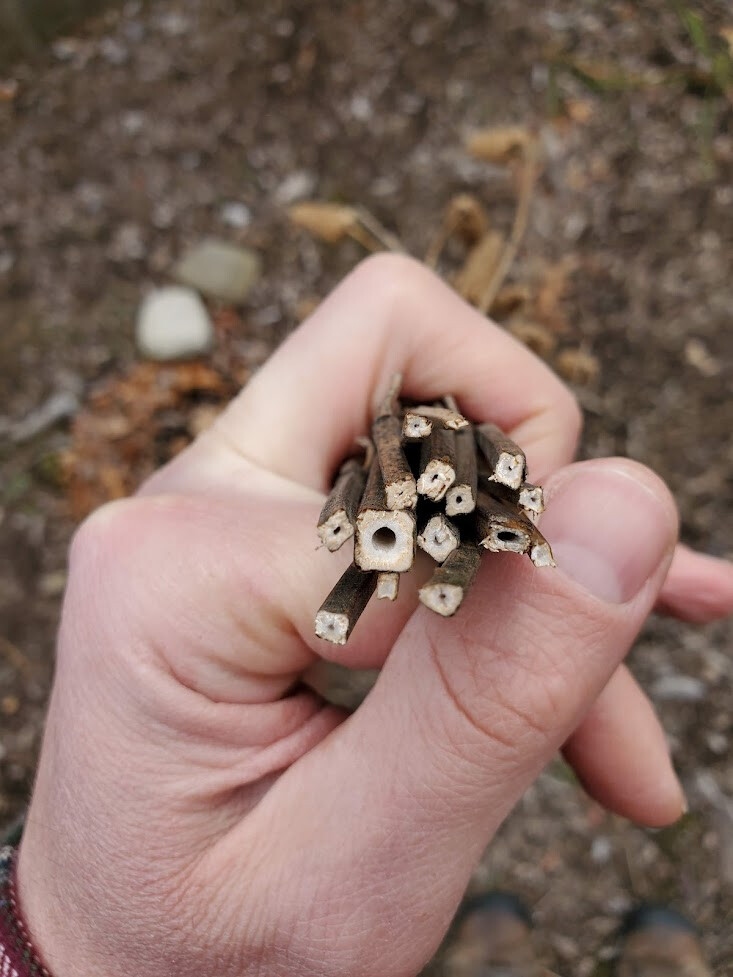 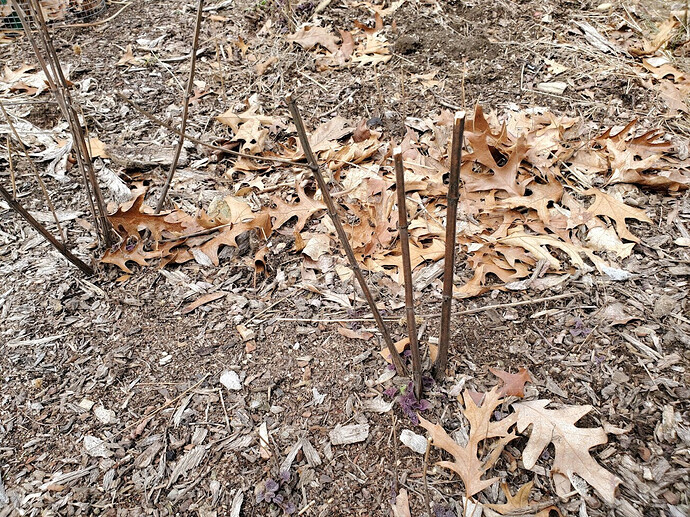 I’ve discovered anise hyssop stalks and seed heads make a nice winter landscape feature, as they stay sturdy and upright over the snow. I’ll admit, not all plants look so hot when you leave the stalks over the winter.

Thank you for the suggestion, it seems very logical and rational, and there is a tremendous ecological benefit of using existing hollow plant stalks rather than importing bee hotels from China.

I can’t say as I’ve noticed any issues, but I also can’t say I’ve noticed when the bees take up residence! I do know that this is how they would find the materials presented in nature, so it’s at least acceptable.

There’a been a meme going around social media about having to wait until temps are “consistently above 50*F”. I saw a post where someone else, who is very science oriented, investigated the basis behind it. Just posting for information. 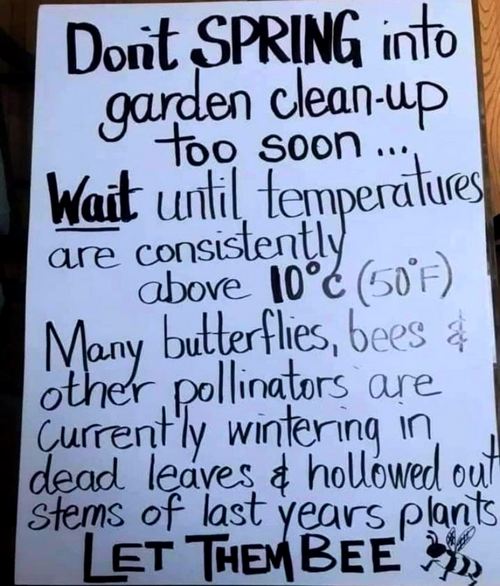 When Should You Do Spring Garden Cleanup? - Garden Myths

In years gone by it was common to clean up the garden in fall. It does result in a neat clean looking garden, but then we learned that all kinds of beneficial insects overwinter in that messy looking stuff on the ground, so we started to do cleanup...

FWIW, I’m at the “arguing with my husband over insects vs aesthetics” stage of spring. He is a fan of the suburban yard. And I just say: 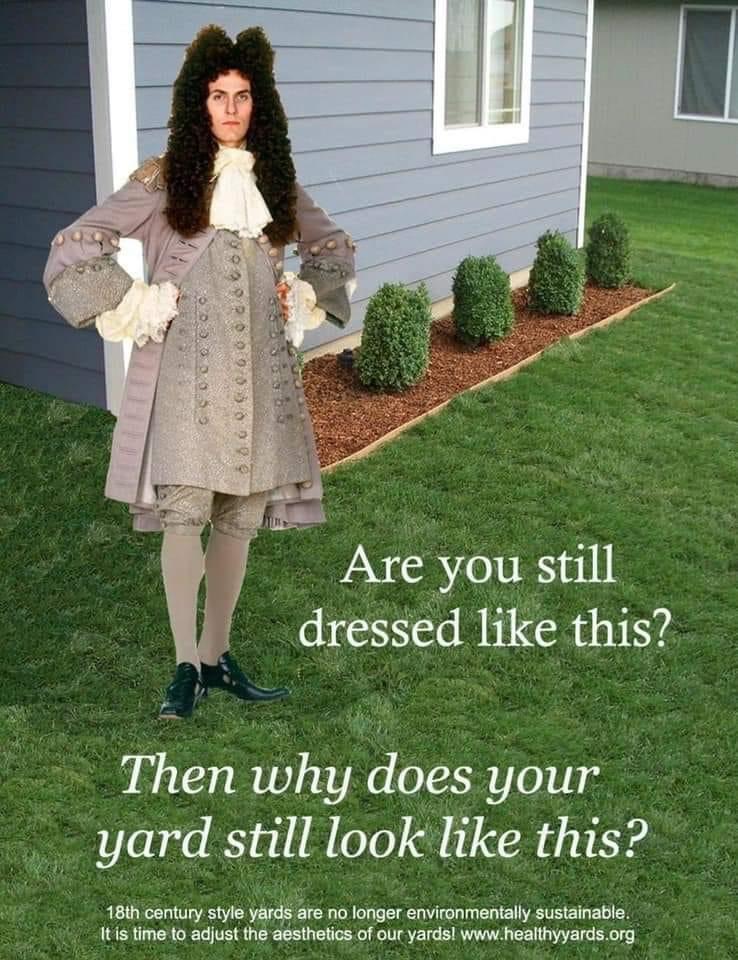 Good article, thank you! I follow the light cleanup as needed approach he suggests. I pretty much just remove the leaves that are over plants that would have a hard time getting through, and I usually wait until I really need to. As far as “messy” yards go, I do find having a “frame” of nicely manicured grass around the beds goes a long way towards making things acceptable for skeptics. It doesn’t even have to be perfect grass! But it helps send the message that you’re doing things on purpose and aren’t just lazy. Also, keeping the edges of beds trim is helpful. Everything inside the frame can still go as wild as it needs to!

Oh, I agree about the framing. There was a webinar I attended last spring about native gardening, and I wish I could remember their pneumonic. But there was definitely an aspect of making sure it looks intentional, especially if you live in suburbia.

Our backyard has a common area/open space behind it (actually, a gas main, but people walk up and down the line). Which makes me feel like both sides of the yard need to look “neat.” But, I am working on a wildflower bed. Just a nicely shaped one

My father and step-mother do not live in typical suburbia, and she has some of the best wildflower beds. Very pretty, but messy. And it works well. My only issue is the ticks.

Well, I found the webinar I attended in my email, but they did not include the slides. It was on creating a bird friendly landscape (which has a heavy focus on natives). After some brain searching (far less efficient than a Google search), the thing I was trying to remember is “Cues to Care.” And I found an article about it. https://www.thenatureofcities.com/2018/08/24/cues-care-city-landowners-willing-make-eco-friendly-landscapes/

I see the bee more like the canary in the coal mine. It’s definitely important. But there are lots of other beneficial insects that are also really important.

I’m really glad to see your advice, since it does not only help bee’s but other beneficial insects to.

I think gardens can be a force for good in this respect. By nature you want nice flowers almost year round (nice to look at). This is great for insects.

A lot of gardeners also plant loads of different plants (almost collection mindset) this is also good for biodiversity. And you can easily achieve higher biodiversity density in your garden than what’s found in nature.

The holdups seem to be wanting to remove/export organic matter in the form of stalks leaves etc. If we kept that in the garden it would be perfect.

And also not disturbing the soil, we’re still bad at that.

Also keeping off the pesticides (especially systematic) is great. If it’s possible for you. I myself have little pest pressure. And thus most things solve themselves. Aphids sometimes slow growth a bit. And i have sprayed a sugar / bakers yeast mixture to lure ladybugs earlier in the season. To avoid the aphid boom, followed by ladybug boom. Get to a balance earlier on. I think it helped. But it was far from scientific. And I’m not sure the ladybugs can actually eat the sugar/beakers yeast. It sounds plausible. But might very well not be.

I think always having a small population of pests and there predators around is preferable over the alternative of getting wide swings (plague’s) in their population.

The only issue with the OP is that leaving the pithy stems would only be good for a wintering bee, and that is if they would even winter in a stem anyhow. They may be more likely dig into the leaves or whatever debris near the ground or fallen logs etc. The native bees need those hollow stems etc for reproducing during the spring and summer and their offspring will overwinter in them. I have also had native bees dig the pith out of blackberry canes and set broods in them.

I hear what you’re saying, but that’s why I leave the long stubs when I cut in the spring. This is to provide nesting sites for bees to lay in over the summer, and I never cut them down. The pupae then overwinter in the still-standing stalks.

I can confirm this. I used to have some Anise hyssop in a grow bag and it became the home of for a family of ground nesting bees. I will absolutly be planting some again in the woods behind my house.

It’s such a workhorse plant. Looks great in summer and winter, makes good tea, smells nice in the garden, bees, wasps, hummingbirds, and butterflies all love it. Also, it spreads readily by seed if you let it, but it’s easy enough to control if you don’t want it to. It’s quickly become one of my favorites.

Lovage stems are supposed to be great for bee tubes. Mine hasn’t bloomed yet, so I can’t confirm.

You forgot the goldfinches. Goldfinches are absolutely bonkers for anise hyssop seed. I think mine actually haven’t reseeded consistently because the goldfinches come strip every last seed off it!

they love chicory too. 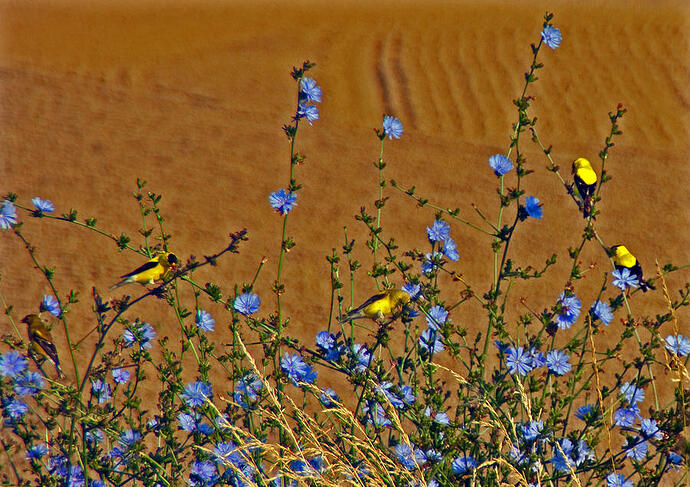 I use teasel for the tubes. Yes, biologists for years have suggested having a more natural, “messier” yard. I have broken branches every year from too much fruit, so I;m not really needing to hustle to get better fruit set. Plants from the carrot family are said to bring in a lot of positive insects (the cavalry, as Elaine Ingham would call them). An entomologists suggested using different heights to encourage spiders, who would take care of an excess of any one particular flying insect. Rachel Carson talked about using the balance of nature to solve problems, and that’s what I’m going for.
John S
PDX OR

I use teasel for the tubes

I found this little forum post that says how he does it… interesting.

He goes on to ask about Sunchoke…i think that would also be a good one.