I noticed your Seattle avocado trials and thought you might be interested in my experiment last winter. I’ve been germinating seeds from the fruit my avocado trees produce in my greenhouse here in the Gulf Islands of Canada. I decided to plant 3 of the 2-foot tall trees outside September 29, 2021. They were planted in clay soil with compost amendment and when it started to get cold I put 6" of straw over them and a piece of remay. We had the coldest winter I can remember with at least a week of 7F without snow pack and a long cold spring with minimal sunlight. I thought the trees were dead but they started to bud a couple months ago and now all three have leaves. Varieties Bacon, Little Cado and Holiday.

Welcome to the forum, and glad to hear I’m not the only person trying this!

I thought the trees were dead but they started to bud a couple months ago and now all three have leaves. Varieties Bacon, Little Cado and Holiday.

Are they regrowing from the roots now, or did any of the stems make it with that level of protection? I’d love to see photos of the seedlings and the greenhouse trees, too. Just to clarify, you’re saying that the small trees you planted are “seedlings of” Bacon, Little Cado, and Holiday, not grafted with those varieties, right?

They were planted in clay soil with compost amendment and when it started to get cold I put 6" of straw over them and a piece of remay. We had the coldest winter I can remember with at least a week of 7F without snow pack and a long cold spring with minimal sunlight.

7°F is pretty cold for even the hardiest avocados to make it, even with protection. How often does it get that cold there? The last time it got that cold here was in the 1980s.

As for mine, I assume you’ve looked at the thread, but just to summarize, I didn’t give any protection to my outside seedlings, and it looks like about 2/3 of them are regrowing from their roots after a brief low of 16°F during that weeklong freeze in late December with most nights in the low 20s°F.

Thank you again for sharing!

I’m baffled that there is a zone 8 in Canada.

There are some parts of Vancouver Island and its vicinity that are zone 9b even! 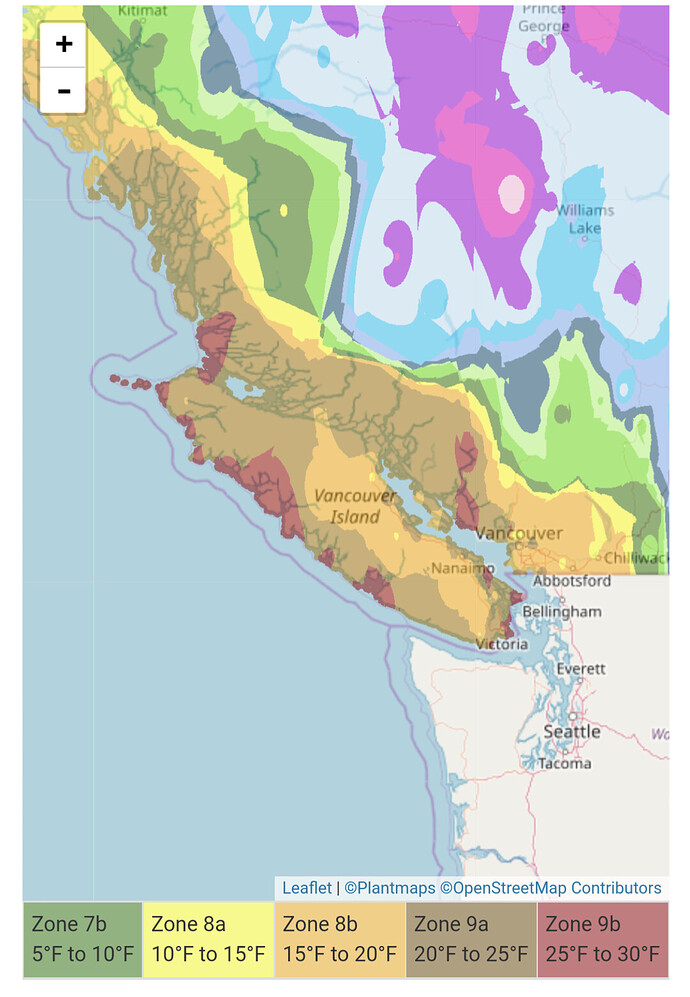 Wow you learn something everyday.

Two of them budded out at ground level and the other is about 3-4" up the stem. I’ll take some photos tomorrow. These are not grafted plants, they are germinated seeds from my Bacon, Little Cado and Holiday trees. I figured that putting a grafted tree out would be pushing it a bit far.
It gets to 15F on my property most winters but for very short periods of time. The trees that produce are in a greenhouse heated to keep the plants from freezing, I aim for 39F but try to use as little wood as possible.

@swincher
You would enjoy her greenhouse videos on YouTube. If I had time at the moment id share a link for you.

Welcome to the forum @JaneSquier 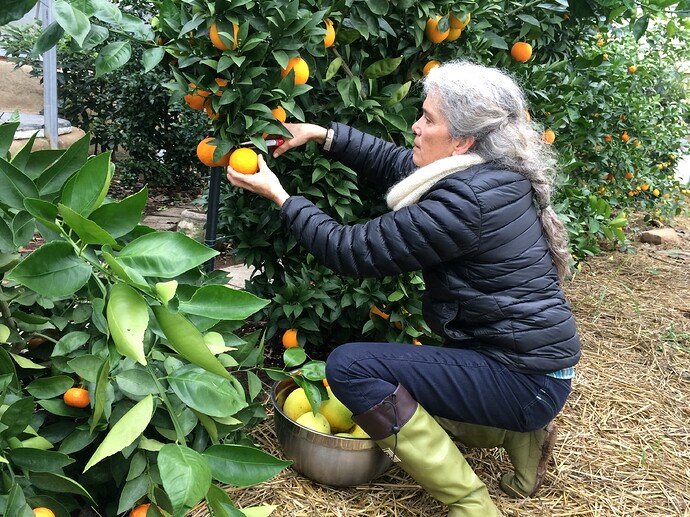 Jane Squier and her unlikely Salt Spring empire of citrus

Most mornings, Jane Squier harvests an unusual crop from her Salt Spring Island backyard: Oranges, avocados, and dozens of other citrus fruits.

Semi-tropicals like citrus and avocados aren’t frozen out by the average low temperature as indicated by Zone, but the absolute lowest temperature. For example Houston which is zone 9a had a low of 10F(8a) in February 2020. That low killed all unprotected citrus, rootstock and all. Since the last low of 10F in 1989 thousands of citrus trees had been planted around town and became very common. Not so common now!

Semi-tropicals like citrus and avocados aren’t frozen out by the average low temperature as indicated by Zone, but the absolute lowest temperature.

Some of those areas on Vancouver Island have impressively mild absolute minimums, though there isn’t great weather station coverage. For example, in the late December freeze when @JaneSquier was 7°F and my yard in Seattle was 16°F, the Tofino airport bottomed out around 19°F, and was above freezing during the day every day of the weeklong freeze.

Vancouver limitation for citrus would be low summer heat. Summers are very mild with most highs in mid 70s. Grapefruit wouldn’t do but meyer lemon might.

Here are some photos of the trees after a virtually unprotected cold winter and cold wet spring. They are sprouted from fruit I grew in the greenhouse here in British Columbia.
Two trees died back to ground level, and both making spectacular comebacks, the bucket is for perspective: 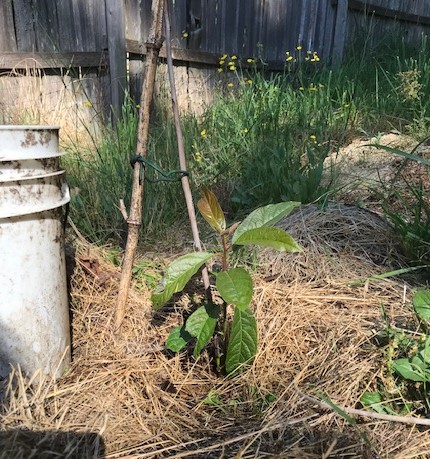 This one had buds survive and sprout at 5 inches above ground level. It’s having a tough time as the bark was damaged and now the new growth too. It seems an advantage to die back all the way! 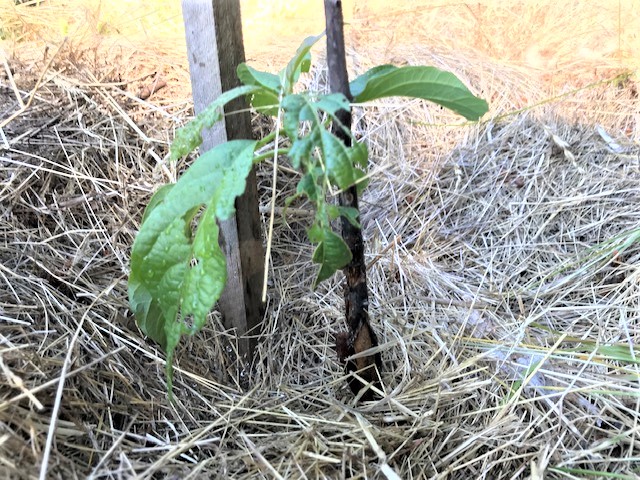 Here’s a tree I planted in April 2022. It is the same age as the previous two trees. 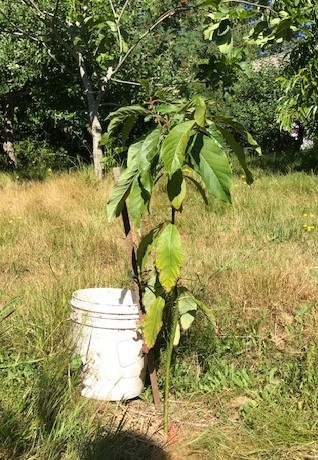 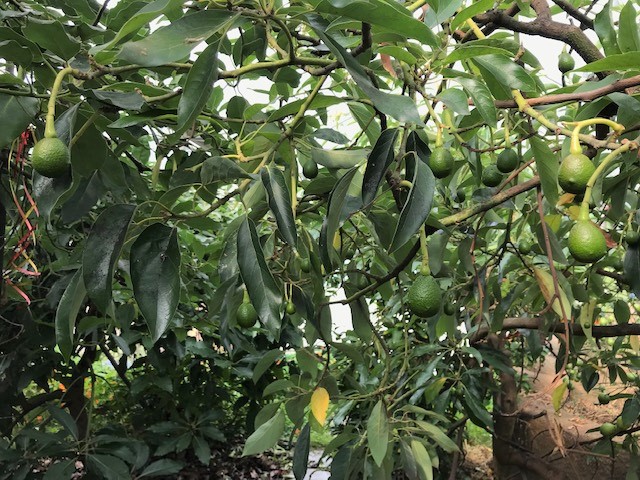 Looking great! What size is that tree, and what size is the greenhouse? And did you hand pollinate in any way?

My greenhouse multi-graft trees took off with growth this year, but I’ve had to do lots of pruning to try to keep them balanced among all the varieties on each tree. Even with aggressive pruning, though, they have added 4+ ft of new growth this year. Hoping for decent fruit set next year.

The greenhouse is 6,000 square feet. I also have 35 varieties of citrus in there as well as some other hardy-ish sub-tropicals. I prune to 8.5 feet which, is just below the gutter, so I can put up an energy curtain in the winter.
I don’t hand pollinate anymore, it never seemed to make a difference. The vents are open for pollinators and if there seem to be no pollinators around at bloom time I buy bumblebees from Kopperts.
If they set fruit they don’t grow much, if they don’t, they put on so much new growth!

7F! That sounds like the temperature at the summit of Mt. Maxwell!! Victoria saw temperatures ranging from 15-25F during that week. I kept a Wurtz outside covered in remay and xmas lights. It died back considerably, grew back and then I killed it with too much nitrogen 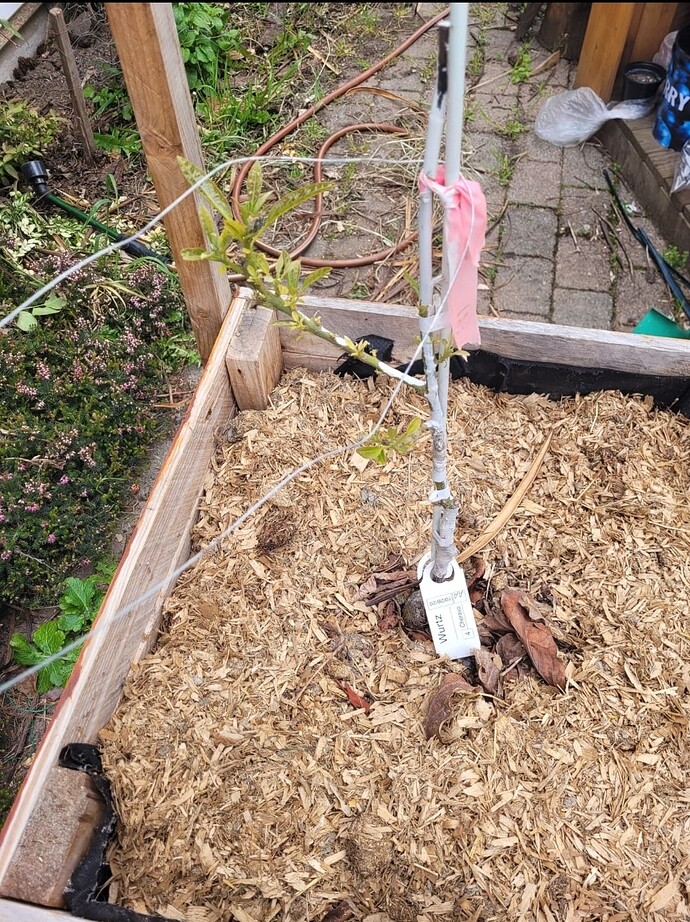 Very jealous of that… that’s the size of my entire lot, house included! My greenhouse is just over 300 sq ft, which will hopefully be enough to have a few fruiting avocado trees to provide seeds for the outdoor trials.

I don’t hand pollinate anymore, it never seemed to make a difference. The vents are open for pollinators and if there seem to be no pollinators around at bloom time I buy bumblebees from Kopperts.

This year I had flowers on Duke, Royal-Wright, and Aravaipa, but they were way too early for the bees to be out and about (January/February) and I didn’t hand pollinate since I figured the trees needed to get bigger anyhow. Next year I’ll hand pollinate or at least shake the trees to release pollen. Based on the amount of growth this year, I’m hoping for at least a chance of fruit on those three varieties, plus maybe Brazos Belle, Linh, Joey, and Jade. The other dozen varieties I’ve collected are smaller grafts and will definitely need another year before a chance of fruit.