Growing in n compost only

Plan a container garden next year. Why is it necessary to have ordinary garden soil in the mix? That advice seems to be everywhere.

My experiment in high volume and nonorganic compost making this year seemed to show the more compost the better.

If the answer is " because minerals" can I compensate by adding rock dust? If so, how little can I get away with?

I can’t just dig up huge divots in my yard, and the stuff sold as topsoil in the bags appears to be decomposed manure.

I grew carrots in 100% leaf compost this year. I plan on trying with garlic this upcoming season.

…though the germination rate was lower than in normal soil.

The potential problem with a compost-only container growing medium is a high perched water table and corresponding greater storage of water, less available oxygen for roots. It can make over-watering a real problem.

On the other hand, if you’re growing plants that need/want a lot of water, growing in pure compost might work out.

Oh - and don’t forget about shrinkage. You’ll need to plan on adding more compost during the season (which isn’t a bad idea anyways) or the volume will drop by 1/3-1/2.

Compost makes things like fruit trees grow to fast sometimes. It works great for small trees and vegetables. I prefer the method for growing strawberries and potatoes ( sweet or regular).

I’m not opposed to amending the mix as required. I live in a dry climate so mostly the water holding ability of compost is a plus.

I’ve got over a yard right now, but at 20 gallons per container, I’m going to need more.

Straight compost doesn’t drain well in containers. Likewise for garden soil. These are root killers. Commercial potting soil works well, or mix your own according to reliable sources. I mix my own blueberry potting soil per the DWN directions, and EarthBoxes according to their recommendations. Otherwise I go with SuperSoil or other commercial mixes. Look for sale items. Compost can be side dressed occasionally, but can clog drainage if over used…

I’ve never had an issue with overwatering with peppers in pure leaf mold…i’d say the opposite is actually the bigger problem and that is the soil getting too dry. I grow in 5 gallon pails. I’ve also done eggplant and had good success. 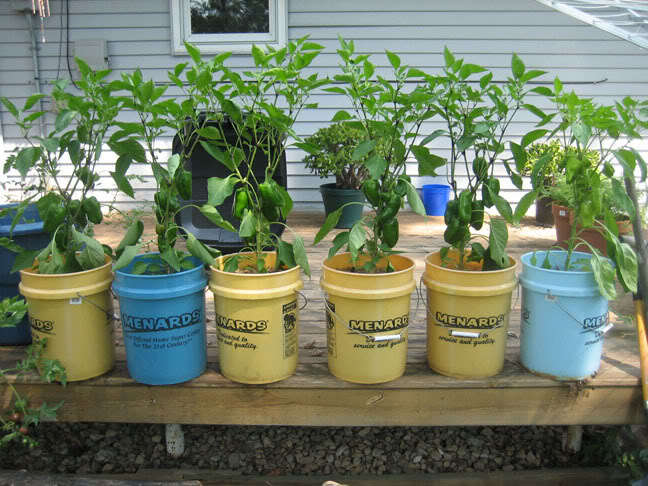 I wonder how this “you must not grow in pure compost/ you must always have garden soil in the mix” thing got started. Obviously there may be issues of soil structure, but it’s an article of faith with a lot of people.

All composts are not equal, and most are not as light as the leaf-mold type compost I’ve worked with. Never used it as potting soil but it often has the texture of peat moss.

Pro Mix potting soil is peat moss made easier to moisten with a wetting agent. Perlite and vermiculite are added to assure optimum drainage. I’ve not created a better mix for vegetables than this, however when I mix perlite with compost and sand it certainly works well enough to grow healthy plants. It also is easier to moisten than pure compost if it dries out completely.

Well not totally true. Numerous studies show compost actually prevents root rot. I can point to them , or at least I know I have one study I book marked. Interesting because every type of compost used all showed root rot protection. Although I agree I would not grow in pure compost. I would add pine fines. What I use is peat, compost, pine fines, and diatomaceous earth the size of perlite. That stuff is fantastic holding water or oxygen, excellent stuff!
Compost studies:

Effects of diatomite on soil consistency limits and soil compactibility

A number of organic and inorganic soil amendments are added to soil for improving its physical, chemical, and mechanical characteristics, which promot…

This is news to me. Every master gardener or horticulture professor I ever heard on numerous radio shows I listen to (Over 20 different poscasts) From England to America all say all the time never use garden soil. Absolutely never.

I think what Mr. Clint is saying is that the poor drainage drowns roots. Antibiotics won’t save a drowning man.

I understand the sense of the forum to be to keep the drainage straight and not worry about arbitrary inclusion of garden soil. Seems reasonable.

I think if you’re good at growing things, you could probably grow tomatoes in broken glass.

Mr. Clint is saying is that the poor drainage drowns roots.

I would agree with that, also I would not use just compost so Mrclint and I do agree, I just wanted to try and point out that, and I think Mrclint would agree, the real problem is soil structure, not compost. Often peat is used like say in the 5-1-1 mix. Peat moss is a compost (composted sphagnum moss), and it retains more water than any other. Yet the mix is extremely well draining! Too good for me! I like a 3-1-1 mix as it retains more water. In general compost is not as bad as people say. I myself feel it is essential, and all organic potting mixes have it. Every one of them. To conclude compost is what stops drainage IMHO is incorrect. That is what i was saying with my post. As compost was lumped in as a problem. Used wisely it can be extremely beneficial. I have been using potting mixes for 40 years.Having poor soil structure stops drainage. Every known potting mix has compost, most in the form of peat moss. Even mineral mixes often contain pine bark fines, which is composted pine bark, yet another compost. Pine bark fines are also very good at preventing root rot. Pine bark fines drain rather well if you use the proper size. If you have problems finding the proper size, adding perlite will increase drainage. So finer particles can be used. My point was that compost doesn’t cause the drowning of roots. Bad soil structure does.
Often people associate compost with bad soil structure, and that is just plan incorrect. Compost in the form of peat, pine, or bat manure are essential to container culture.

As far as garden soil, I have many 30 gallon containers. Those are quite big! I would not use garden soil in them ever. If your container is 20 feet deep, then OK, use it.My raised beds are connected to the ground soil below them, so yes, they go down all the way to China. Garden soil will work in that instance. I would not use it in raised beds with a defined bottom, such as wood or concrete. Use compost as many have pointed out works quite well for them. It works super well for me too. I have observed that containers with compost actually get better with age. it takes time for the compost to break down and supply nutrients. I have observed 2nd year container soil with compost works better. I usually use for 3 years and scrape soil and recycle in raised beds. You can use longer, Steve has used soil for 7 years. You can refresh with fresh compost too. I myself do refresh, but still only use for 3 years as soil becomes compact, and soil structure becomes too compromised to be effective.

I think if you’re good at growing things, you could probably grow tomatoes in broken glass.

True, the experts say you should never use garden soil in pots

Garden soil in a potting mix simply requires more compensating ingredients that encourage drainage. Garden soil itself has much more bang for the buck (bang for the square inch) than a typical potting mix. If you remove the bottom of a pot, garden soil can work just fine- it is the affect of the bottom itself that requires a very good draining medium.

I use soil in my tree mix, partially because it helps with water retention.

Peat moss is a compost

My understanding is that peat moss is not a compost and hasn’t reached the point of stability to be termed as such. What stops it from composting is its high acidity and the low oxygen of the peat bogs. It is only partially broken down and when put in an environment with adequate oxygen and neutralized with limestone it breaks down rapidly, which is why peat based potting soils shrink so quickly (and lose their ability to drain as they become finer).

I don’t know of any established definition of where organic matter is broken down to the point of officially being compost but sphagnum peat moss is consistently defined as being partially composted.

My understanding is that peat moss is not a compost and hasn’t reached the point of stability to be termed as such.

It is very different, I just view all decaying organic matter as compost. it has many different properties though and you point out some. It’s not very nutritious either.
Pine also is not typical compost. Although in a potting mix you can replace peat or pine with compost and usually achieve the same or better results. IMHO using all three is best. I like DE over perlite as perlite breaks down quickly. DE can last a long time (decades). Their properties are different. I tried using both, and conclude that I didn’t need any perlite if using DE. It retains water and perlite does not. Both oxygenate the soil.
Most newbie gardeners over water. this is not a problem for me. Leaving potted plants for 4 or 5 days is typical of my methods (I’m always out of town), so I needed something that retains water. Yet will not drown or compromise soil structure. DE fit the bill. DE is one of the most amazing soil amendments I ever used, yet it is virtually unknown to most gardeners.

OK then. I’ll look around for diatomaceous earth next spring.

OK then. I’ll look around for diatomaceous earth next spring.

Horticultural DE is way too expensive. Best product is Optisorb oil absorbent 100% DE. Particle size is decent. Sold at O’Reilly’s Auto Parts. Not as nice but usable is Napa Floor Dry sold at Napa stores.
The same mining company makes the horticultural products, used on ball fields, and in commercial gardens.
Do not breath the dust, wear a mask when using. Once in the soil it is safe. The same with perlite or vermiculite.