Technically the fruiting body of fungi…

Does anyone here grow mushrooms from plugs? Looking into trying shiitake. Oak logs are easy enough to come by, just curious if it is worth the effort or maintaining the logs for 1-2 years. Seems simple enough from my brief reading!

And is there a ‘best’ company to buy from? I assume a lot of places just resell.

Remember the oak log has to have been cut down less than 6 months from when you inoculate it. Fungi Perfecti make their own spores. The founder is very famous in the fungus among us crowd. Paul Stamets. I enjoy his lectures.

I have grown shItake using log culture. Fungi perfecti is a good source, there are others which may offer other strains that could be more ad apted locally, one I like is Forest and Field. Logs should be used within 6 weeks of being cut from living trees, and take a year to be colonized by the mycelium before they start fruiting. They can last 5-7 years, and typically produce a couple flushes of mushrooms per season. Plugs are convenient, more economical is to get sawdust spawn blocks and a palm plunging innoculator tool. My last batch of logs are done, this spring I will make some more, shItake and oyster-I love shrooms!

I’ll throw my vote to Field and Forest, and actually against Fungi Perfecti for a couple reasons I don’t want to go into huge detail over, but F&F has more strains and I’ve been leery of Stamets on several fields…on a mushroom cultivation board I also frequent folks have a love/hate divide over him and I feel I skew to the latter because I get a bit of a car salesman vibe from him in how he markets and warranties his stuff…

as for growing them, it is worth it if you have shade and reasonable expectations–for shiitake I can expect a couple dozen or more mushrooms per 4-6" thich and 5-foot log, over 2-3 years. Some of those are bigger than portabellas.

I’ve been doing this for years with Shiitakes primarily. The innoculation window has a beginning point too in that you shouldn’t do freshly cut logs but wait about a month for some chemical constituent to decrease (can’t remember which but has to do with the tree’s immunity). Then don’t wait too long. I mark the 6 weeks from cut point on my calendar. And the new logs best not be left where other innoculators hang out - like laying on the mud, LOL.
I just pulled a few shrooms off a 4 year old oak log a few weeks ago. I can’t see these going much longer as they literally fall apart as the mycelia digest the wood. BUt I’m keeping this just to see what happens. [quote=“ampersand, post:1, topic:9281”]
if it is worth the effort or maintaining the logs for 1-2 years
[/quote]

You just need a storage place. Once they start to bloom you need to protect them from slugs and birds. I did some last fall when I had some tree work done. They kindly cut mini sized logs for me to be able to handle. I set them aside in my hoop house in aluminum pie pans filled with water. The closest one is the 4 yo one (before I realized I could hardly move the size logs you see in most internet info on the topic) 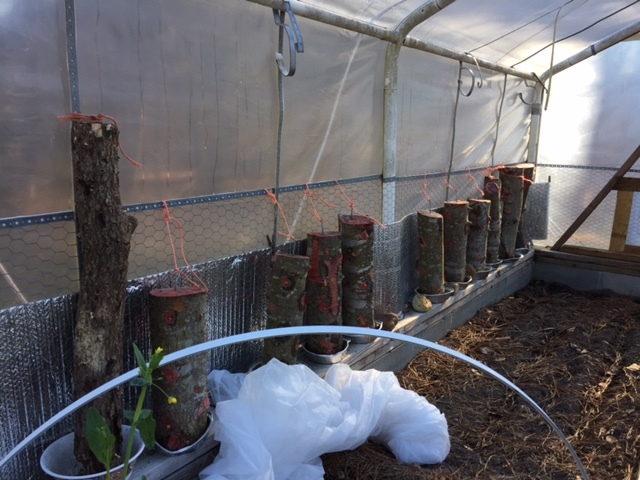 This size I can fit in the freezer if I want to fruit it and it’s more easily managed. Basically you want to keep them clean and wet.

Well, my trusty coworker (Hi Steve!) and I went out this morning and cut down a few pin oaks that needed to be thinned out. Got a good dozen 40" logs that are 4-8" diameter. I’ll order some plugs then and set it up in 2 weeks. Might try some Oyster and Lion’s Mane as well.

Greetings Ampersand, I just came across this post today and am wondering how your experiment went. I have been growing Shiitakes for 20+ years and I enjoy it and get quite a bounty every year. You can see in the photo that I let mine go a bit long. Some people harvest them before, or as soon as, they open. So far I have used Oak, Sweet Gum, and Oregon Ash. O and SG work well, Ash not so much. If yours are growing, this next Fall should bring a significant harvest; the next year, even more. 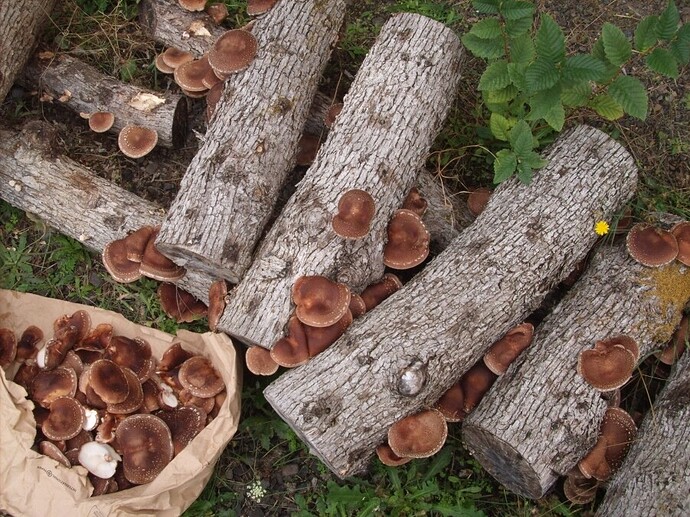 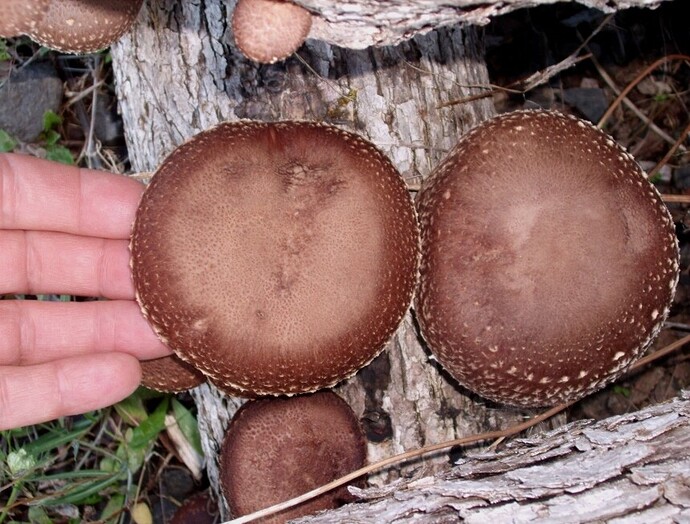 Nice Steve! Do you dehydrate them or preserve them somehow when they all come in at once?

I haven’t even started yet, I started this thread today. I cut logs and ordered plugs today.

I also have had logs for a long time. In regard to Fungi Perfecti versus the rest of the world, I find that Fungi has more productive shiitake strains, whereas others have less productive but better tasting strains.

Shiitake is king with plugs, I agree. Oyster is more difficult to flush at will, and other species are more difficult to grow. You have to cut in winter, which the OP did. But to inoculate you need high moisture and decent temperatures. I don’t know which zone you are, Ampersand, but in Zone 6 I would pile them in the garage, inoculate them in early April, while keeping them moist and under plastic. After a few months the mycelium has taken and you can put them outside, but you could also keep them in the garage until Fall, so long as you keep them watered. Oak is best with shiitake.

Most of my logs were cut in November, injected two weeks later, and placed in 55 gallons bags in my basement, with a hole for occasional watering. The bags limited the need for watering. Some mold would form but not threatening for the fungi. Then placed outside in April-May the next spring.

We try to eat as much as possible when they flush, then dry the rest. We dry and grind all stems, which are on the fibrous side, but dry very well if you just leave them on a counter long enough. The resulting mushroom powder stores indefinitely and is routinely added to soups.

I have a question about what you do to flush them. I used to dunk them into a 55 gallon drum for 24 hours, held down with bricks. Eventually it developed a leak, so now I set a sprinkler in front of them and let it go for 24 hrs. Not as good, but also a lot easier on my back as I do not have to move them.

If you won’t be grinding the stumps they can be inoculated and take care of themselves, the roots represent a good part of the tree’s mass. Ideally you would want maitake for stumps I think, nearly every wild maitake I find is on a red/pin oak, but oysters or shiitake should work also.

They keep well in the fridge, I give some away, I eat as many as I can fresh, and I freeze some. Freezing isn’t the best way to keep them because they thaw out mushy, but still work fine in soups and so-so in stir-fries. Dehydrating is a good way to go. They get a bit tougher but the flavor intensifies, too. Unlike most other mushrooms, don’t eat the stems; they are woody and they are filters for…what the mushroom doesn’t want. You won’t have to worry about having too many in the first couple years.

Oh…I read that date as Feb 16, like it was Feb of 2016. Good for you trying this out. I’m fortunate in that there is a great source of all things mycological very near me, the Northwest Mycological Consultants w/John Donoghue, in Corvallis (Orygun).
This is a good time of year to cut a tree. Wait a month or so, cut the pieces to the size that you can manage to move around unless you are going to set them up so you never have to move them, and clean off the logs with a wire brush and a hose-down. I use dowel plugs so I drill the holes and pound in the plugs and seal each hole with wax (food grade is nice; don’t use bees wax, bees might steal it) being extremely careful not to catch the whole thing on fire when melting the wax. Keep the logs out of direct sunlight and somewhat moist…not waterlogged. Once you get some activity you can decide whether you ever want to force-fruit them. You have plenty of time to learn.

I am in Zone 8 so YMMV regarding times of year, etc. Ideally, the tree is cut just before leaf-out so it is full of goodies (so they say). Our weather here is so mild that it is naturally good for fungi, mold, moss, etc. Other conditions need to be considered. There are good books on the subject.

If only we could cultivate chantrelles, sigh. One of my most memorable meals involved sturgeon stuffed with scallops and chantrelles.

I have a friend in Humbolt CA and his property was always loaded with chantrelles this time of year. If only I could get them to the bay area where I see them being sold 15-25$ a pound!

Out of curiosity I googled it, looks like some Finnish mycologists have figured out how to culture chanterelles and are distributing inoculated saplings,they grow in relation to living trees. Can’t just get some logs for them!

Very interesting…‘they’ have been wanting to domesticate Chanterelles for-ever. Mmmm…throw in some ocean fish and Hazelnuts, and have blackberry pie for dessert = PacificNW wild harvest.

The classic forced flush is: let them get a bit dry, then soak them, then chill them. That’s what I look for re: Chanterelles…when we get some serious Fall rains that are followed by the cold, East winds.

I guess I wanted to know what people use to soak them. Kiddie pool? In MI you can flush them in May, July, and September. Older logs tend to produce only in September. I still have some logs from Fall 2009, no point in flushing them early, but they give me something in Fall. My other question is, if you use a tank of some sort you have to move them three times, to soak them, prop them while they fruit, then re-stack them. sprinkling a widely spaced stack results in less fruiting but no move whatsoever.