I would like to develop a new purple leaf plum with large edible fruits.

Does growing a purple leafed plum from seed require ( or greatly increase the chance ) the seed to be from, or the seed to have been pollinated by, another purple leaf plum?

Will the new seedling have purple / red foliage early on, or does this develop as it matures?

It would help if one of the parents were purple. I would not wait for nature to send you a random purple mutation. The up side is that it is easy enough to select for when making crosses. Unlike fruit quality, you won’t need years to determine.

IMHO you will have a difficult time breeding good fruit from p. cerasifera. I have sampled fruit from dozens of seedlings and they are all pretty lousy for one reason or another. All have exceptionally sour skin and many are mushy when ripe and have an unpleasant vegetative taste. One exception is an excellent old purple leaf cultivar called Hollywood which is probably some kind of cross because the fruits are much larger than a typical p. cerasifera. The fruit is excellent and firm with a phenomenal dark red skin color and deep red flesh. That may be a good place to start doing controlled crosses. In the picture below, all of the small plums are from p. cerasifera seedlings. Hollywood is the larger dark red plum in the foreground. 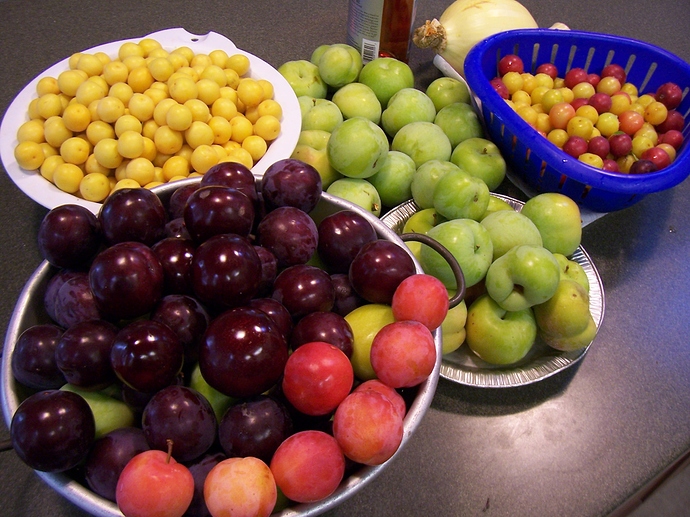 Foliage on Hollywood is bronze on bottom and dark green on top of the leaf. Fruit in this pic is not ripe in mid June 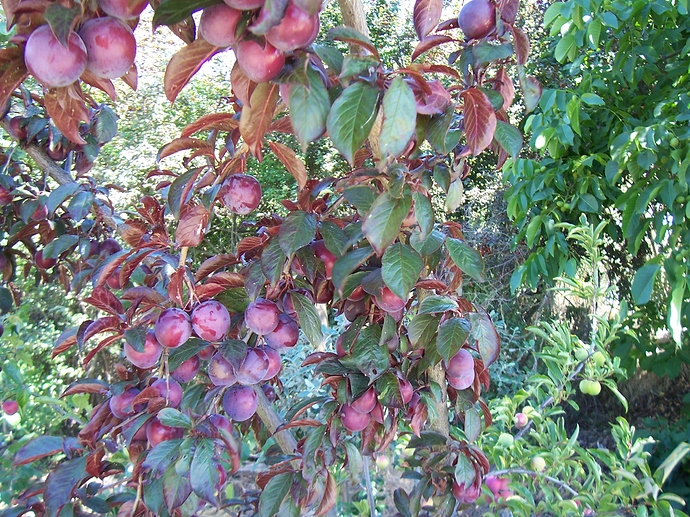 Foliage on Hollywood is bronze on bottom and dark green on top of the leaf.

That is really interesting because some time ago (2018 wow does time fly!) you sent me scion. I grafted it unto the SpiceZee Nectaplum, which itself is a beautiful tree with purple leaves. Anyway my leaves are purple top and bottom. My nectaplum almost died in the flood we had 2 years ago. Half the tree died. I lost many grafts. Hollywood was on the good side. I took scion to put in on Arctic Glo nectarime. The scion looks compromised though. I’m still going to try. The rest of the nectaplum may die this summer. It took two years for the flood to kill it. Hopefully it survives and my graft. I got fruit last year, I enjoyed it a lot! But it very possible I lose this cultivar. Maybe next year you can help me out. I like this plum and would like to keep it. See what happens this season.
Anyway this plum is a good purple leaved plant to grow and the nectaplum, wow, amazing a great low acid nectarine that is bigger than any nectarine I have seen! 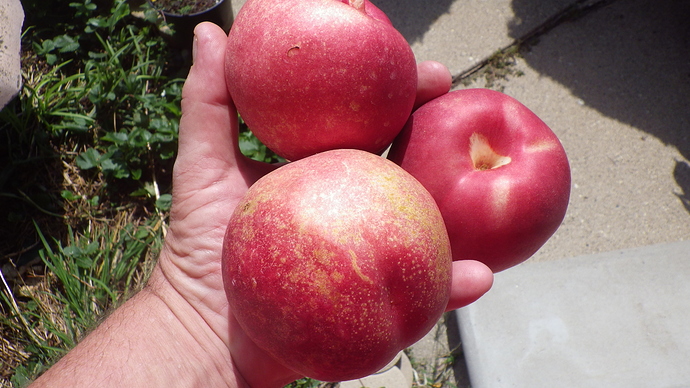 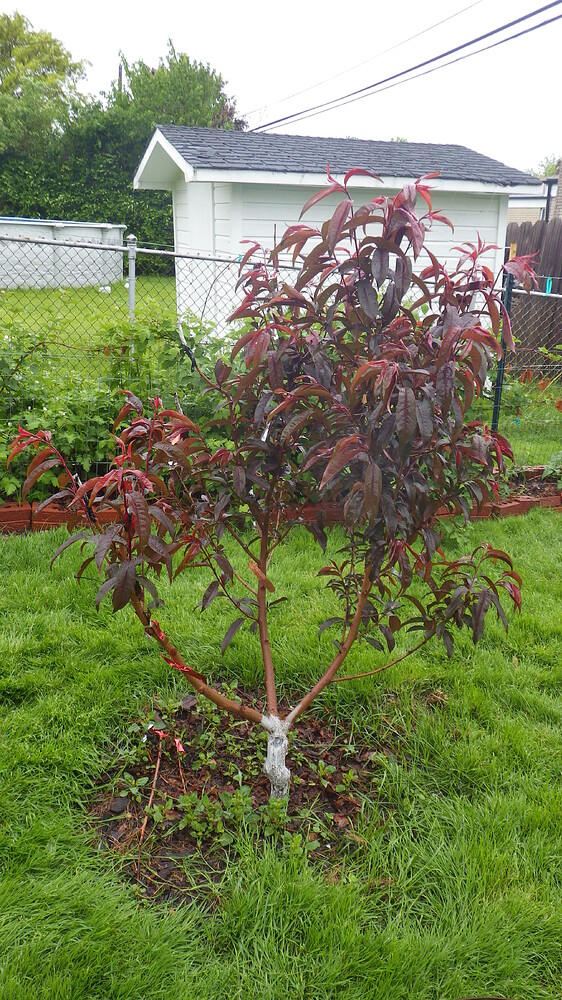 If I remember correctly, the Hollywood leaves become much darker purple when exposed to sunlight. The picture above was taken deep in the lower canopy where very little light penetrates.

I currently have two bare root Hollywood Plums on order to arrive late April, and also recently grafted several Nichols plums to root stock.This is my first time grafting and I am hoping for a success. Unfortunately, a bare root Hollywood and Cocheco were lost a few months after planting last year. Id like to start cross pollinating before these trees are producing fruit. However, I have not found any nurseries in my area selling purple leaf plums other than the ornamental varieties.

In this thread, post 254 & 258. Chickasaw Plum Inventory - #254 by coolmantoole They have red leaf Chickasaw plum hybrids.

It will be red early on.

My two Hollywood’s are growing well in some tough clay soil here I. 7b. Had lot of small fruit last year but the curcullio got them. I have a huge bag of Surround this year. I am ready.

Unfortunately, I have learned that my eagerly anticipated order of two Hollywood plums cannot be fulfilled.

If they are still wanted,there are a couple places in Washington State,that still have some,according to their websites.

Fruit ripens middle of the season (August), tree grows compact. Fruits abundantly with fruit that has purplish red flesh with firm and juicy texture. Blossoms are full and cover the branches. Leave… 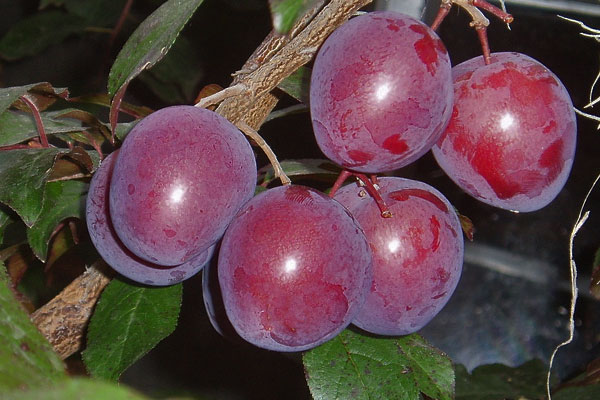 Thanks for the recommendations

Here’s my Hollywood this AM. 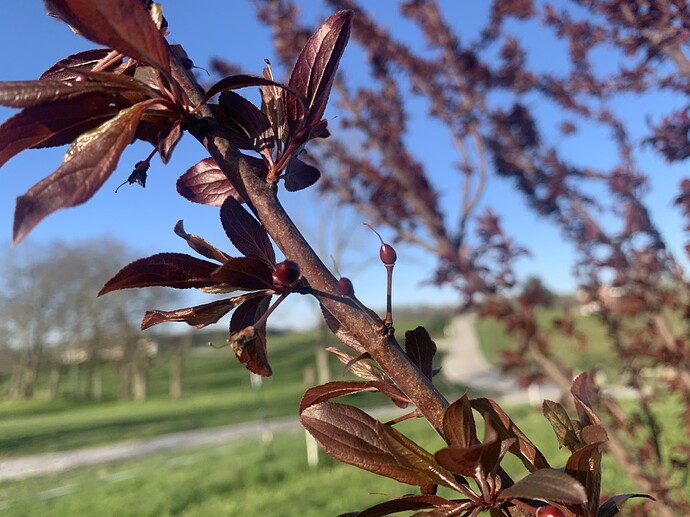 The “Thundercloud” cultivar is widely planted as a street tree in Seattle. The ones in my neighborhood rarely produce much fruit (a handful per tree) but when they do they taste pretty good.

I’m not sure about in your area, but you might want to check the Falling Fruit app to see if there are any purple leaf plums listed near you where you could collect fruit or scions. The app lets people add trees, too, but the bulk of the trees listed are from public directories of street trees planted by local governments. E.g. here are the purple leaf plums listed in my area: 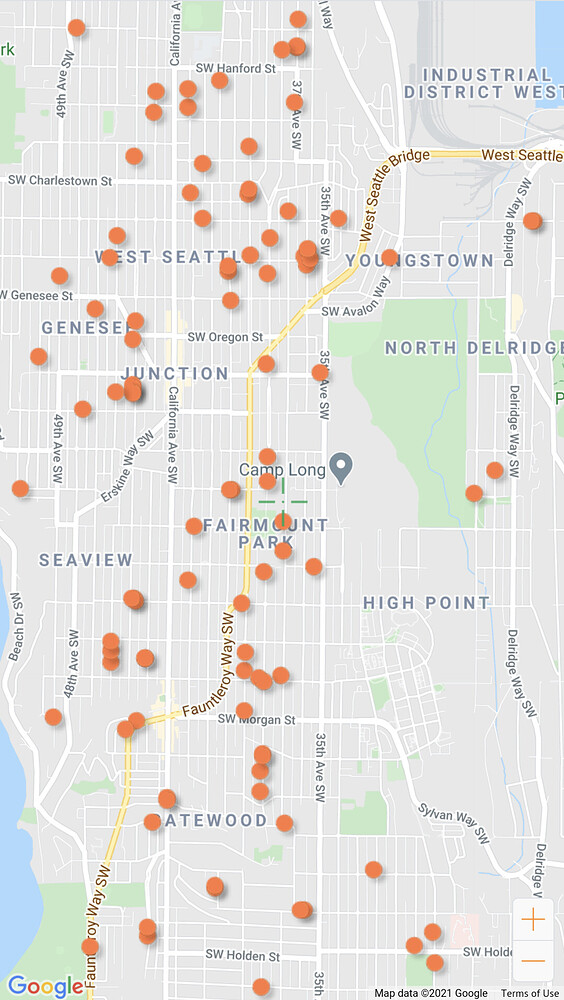 I don’t know much about the purple leaf trait in plums. But I found it interesting that when I grew a bunch of Dapple Dandy pluot seeds, one of them turned out to have completely purple leaves. DD has green leaves, but must carry the trait for purple 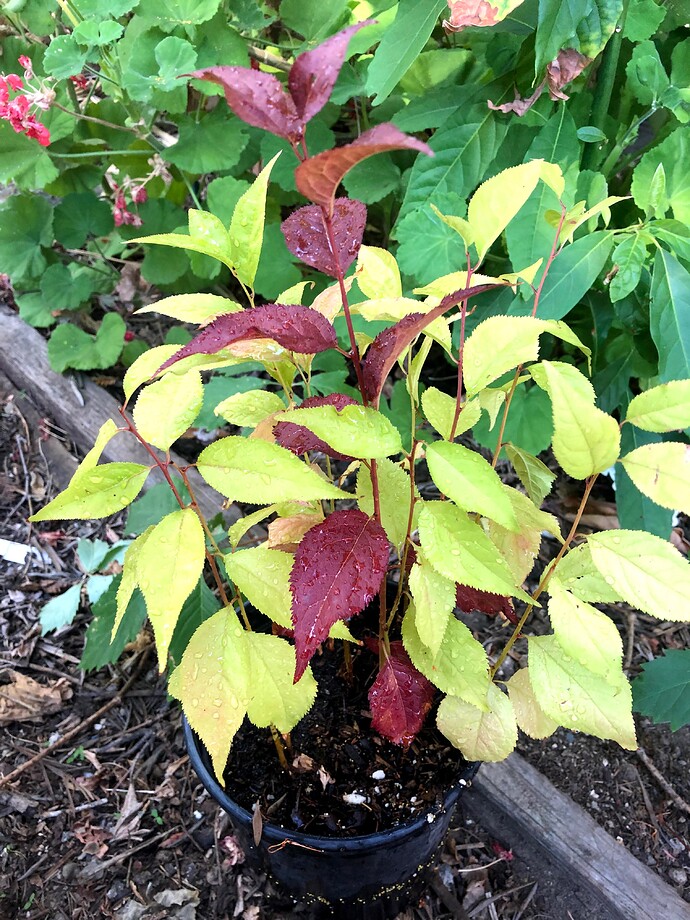 Cool, are you planning to grow those out and try to get fruit?

My observational experience with purple leaf plums has been that the purple trait is incompletely dominant. It appears that if one copy of the purple gene is inherited the result will be a muddy purple color that fades to greenish purple through the season. When two copies of the gene are inherited the purple color is much nicer and not muddy looking. A number of years back I grew out a number of plum seedlings that came from a purple leaf tree. There were a mix of seedlings with both green and purple leaves so I assume the parent tree only carried one copy of the gene. Of the seedlings I eventually culled all but one; that with the most intense purple color. It actually has so much pigment that the one year old branches look almost black before eventually turning gray as bark develops. It produces pink flowers too (hopefully this year I’ll get to evaluate fruit from it).

I would assume that given the ability for various Prunus to hybridize the purple leaf trait may be the same gene in all the different purple leaf selections, but I am not certain. However, based on the muddy look of a lot of selections I’ve seen I strongly suspect this color is based on a partially dominant gene in all the different Prunus which have this color bred in.

Assuming I’m correct you would need to plan to do at least two generations of breeding when crossing purple leaf plums to larger fruited green leaf types if you wanted to get the really nice purple color and not the muddy purple color. My recommendation would be to sibling cross the F1 progeny rather than back crossing to either parent. The second generation is when you will have a good chance of finding some seedlings that possess both double copies of the purple gene as well as genetic traits favoring larger fruit.

Some people have told me their ‘Thundercloud’ plums produce lots of fruit. I suspect one of two things is going on. Either they have a different selection of the same species that looks the same, but is more productive, OR it could simply be a pollination issue with them often being planted in isolation from other plums which would bloom at the same time for cross pollination. The species Prunus cerassifera (which ‘Thundercloud’ belongs to with a little possible introgression from a different species… ) is naturalized in my area so I’ve had the opportunity to observe quite a few genetically distinct trees (not clones) and have found that even when cross pollination is available some of the trees bear very little fruit while others bear heavily.

I see ‘Hollywood’ plum has been mentioned repeatedly in this thread. I suspect that it would be very worth growing out seedlings from ‘Hollywood’ plum because it is considered to be self fertile and so a fair number of the resulting seedlings would be from ‘Hollywood’ x ‘Hollywood’. Of those seedlings I would predict that about half would have the muddy red leaves of ‘Hollywood’ and maybe a quarter would have green leaves as well as a quarter with improved fully purple leaves (this ratio would be different if the tree was also receiving pollen from other trees around). Of the very purple leaved offspring I’m sure something might pop up with good enough fruit to be worth growing.

@danchappell It’s interesting to read your experience with P. cerasifera. I have found some to have very tart skin as well, but I lucked out in finding a specimen (with just green leaves) which is highly productive and has rather well balanced flavor. I actually find the acidity level is toned down enough that the fruit is good to eat even before peak ripeness which allows for a longer window of time to enjoy the fruit (it’s not mushy either). The original tree was on a steep slope and difficult to access so I rooted cuttings of it to grow my own tree. I gave a few of its clones away and kept one for myself which is getting ready to bear its first crop this year. I’m excited to see if the high quality of the ortet is maintained in the clone in a different growing location!