I’m looking to plant a larger variety of food this year given the times we are in and 1 issue I run into every year is that my squash plants are way too healthy and crowd other plants nearby, stunting their growth. I’m looking into ways I can increase my squash and cucumber varieties in a space friendly way and am curious if anyone here grows squash vertically and if that can be successful.

Currently, all of my summer gardening happens in several 3’ high 4’x8’ raised boxes with wire underneath (I have California gophers). 2-3 years ago, my squash stunted nearby peppers, so last year I grow the squash on the ouside corners and then staked a tomato cage on the outside of the box and tried to get the squash to sit and stay on that cage. Didn’t have the greatest success but it was better than before and I want to try something even better this year.

I’ve been looking into gardening supply’s A-frames as an option - has anyone tried that? I also see a “bean tower” that I’m thinking of trying for the pole beans.

While I grow from raised beds atop the ground, I place a section of cattle panel fencing pushed up to create a trellis between the beds. You would probably need some hardware to hold the cattle panel in place. In the picture below, you can see the panel to the left side with beans just starting their ascent up the trellis. 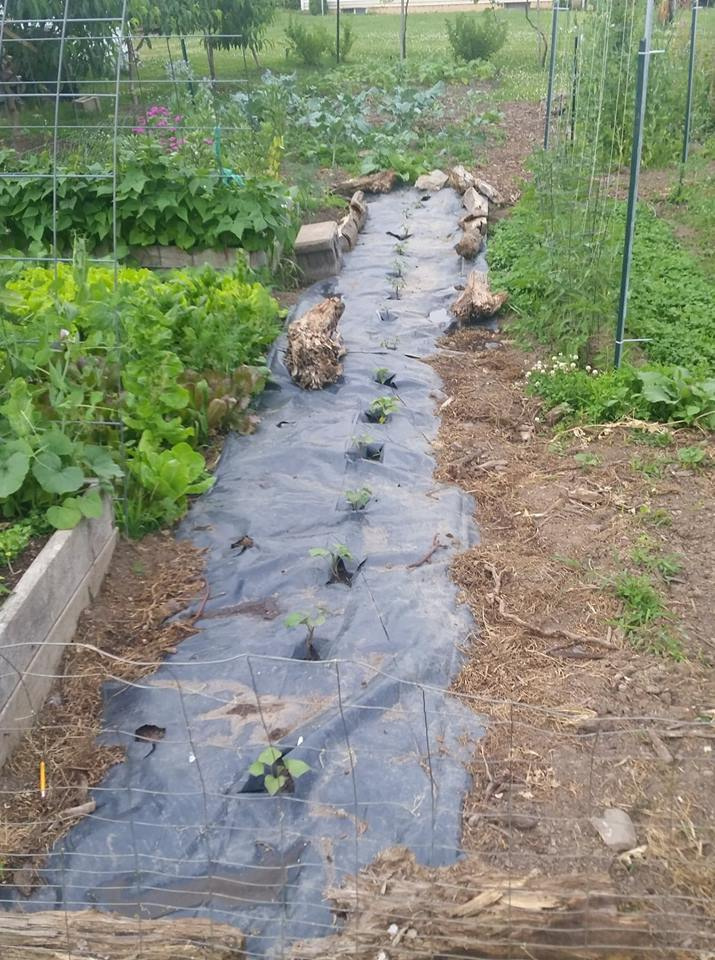 Gourneys had a vertical yellow summer squash. I tried to get a package but they were sold out. I’m going to try to grow some summer squash tied to a stake. Don’t know how it will work but could help with rot and bores.

For cucumbers, I make tripods out of bamboo stakes from Home Depot. Just drive three or four into the ground, bring them togethet and tie with twine at the top, then optionally spiral the twine down to the ground level. Cukes love it, but squash might be too heavy for this construction. Hope this helps…

I grew butternut last year inside big hoops made of remesh bent in a circle. It was pretty vigorous and gave a good yield. I was surprised, I had thought it needed to root along the stem nodes.

I’ve had good luck running cucumbers up vertically on the north end of 4x4 squarefoot gardens.
Other squash just fail here, not sure why.

These are the standard squarefoot supports as in the books. 2 pieces of rebar pounded in outside the corners and then 6’ “u” shapes made of pvc plumbing pipe. Then mesh is tied to the inside We just lift the supports on, over the rebar, in the spring and off in the fall. Beans and peas love them too. You’d need a heavy wire support on the inside to hold bigger squashes.

I grow cantaloupe, cucumbers almost all vining veges vertically and it has always worked out well.

Do you have any pics of the same? Sounds interesting

Here’s a not-great pic of the squarefoots. You can see the supports. 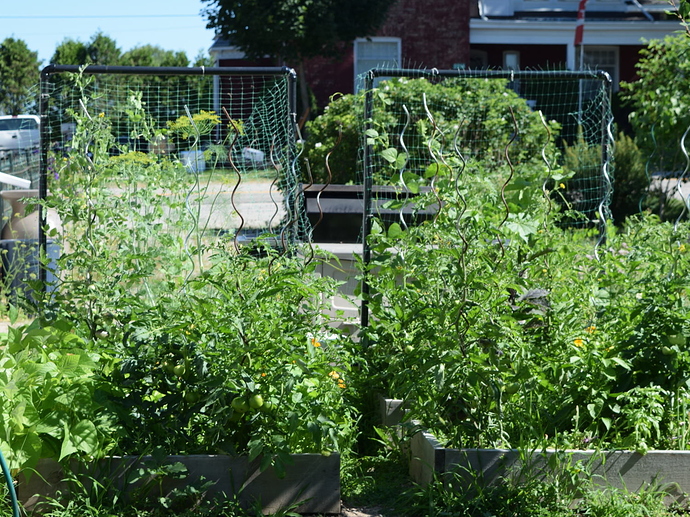 About the best I’ve done with vertical squash so far is Tromboncino. In 2017 I grew some on a jute net stretched along a bamboo pole supported on each side with bamboo teepees. 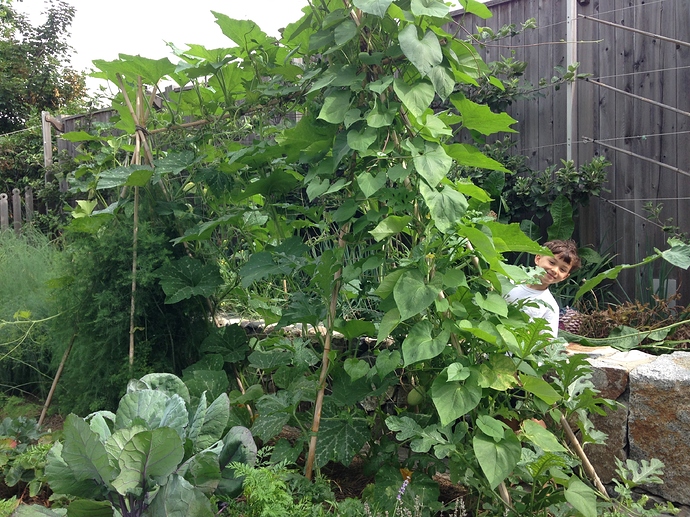 I trained the vines up teepee legs and across the net, weaving new growth in and out of the openings and along the top pole. 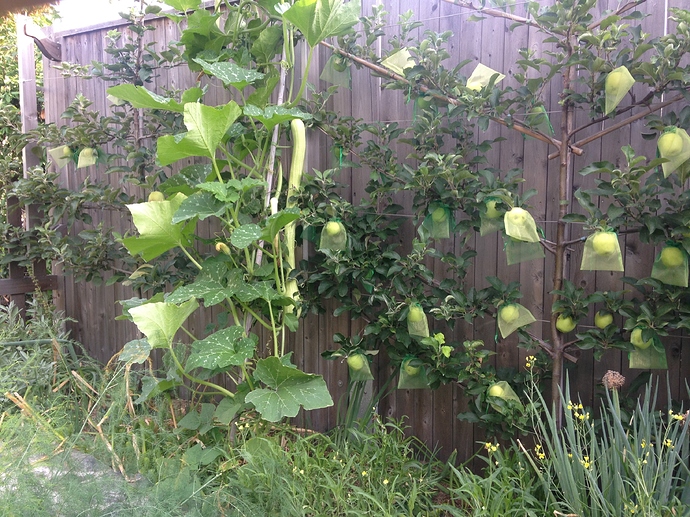 I can’t grow maxima or pepo because they get destroyed by squash vine borer before making any useful product. So I’ve been running through various types of moschata to find something I like. These Tromboncino were really fun to grow - highly vigorous and they grew some awesome squashes. Unfortunately they had no flavor at all! I don’t know if it was my soil or what but they did eventually all end up in the compost. 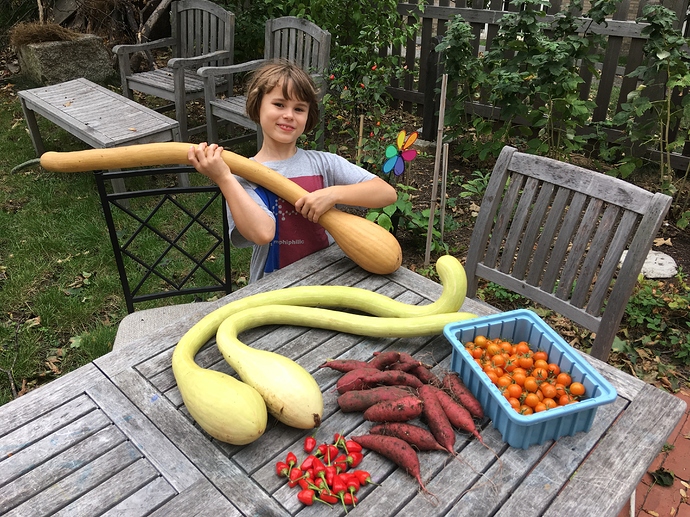 I’m trying again this year with some other varieties grown on some new trellises I’ve been working on.

Are those peppers on the left? Which variety?

I use trombo as a summer squash, pick the day before the flower opens for tenderness. It still takes up acres of space

They are peppers, but I can’t remember what variety they were, sorry. I sort of think they may have been a decorative variety that I picked and ate anyway.

We tried eating it when it was 20-30cm long as a summer squash. For us, the texture was good but it had no flavor whatsoever, so we let it go to turn into winter squash. Visually it was fantastic, and those long necks would have provided loads of seed free squash meat. But aging to winter squash didn’t help with the lack of flavor.

Actually the terrace I grew them in has had some other strange flavor issues with other plants. I had a couple dwarf blackberries in there for a few years and the berries were utterly bland. Numerous varieties of tomato grown there are also totally without flavor, though Sungold makes delicious berries there just like it does elsewhere. Strawberries did great and made tasty fruit. Alliums do great and taste good. Brassicas are fine there. Asparagus has struggled and eventually died there, despite having a reputation as easy to grow.

I have had a couple soil tests from that area and results are fine at least from what the test is capable of measuring. So a bit of a mystery. I’m planting some stone fruits in there this year and I’m curious if they will taste good or have no flavor.

I am not convinced that any summer squash has flavor, so it’s all one and the same to me.