I’ve always had a lot of trouble trying to keep hardy kiwi to a reasonable size.

Today, I got frustrated with it and took a hedge trimmer to it. I’ve seen @scottfsmith mention that he had done this in the past, but I’ve always tried to be more careful in my pruning. But, that’s going to have to change. At least for the vines in the side part of my yard. Using pruners and loppers on such big vines, especially when I want to take a lot off, takes forever.

I may still use the loppers to periodically cut off the vertical growth from the vines that have a heavy crop- I’d hate to accidentally cut the fruit off. But, the male from the side-yard is still growing back and didn’t pollinate much this spring (I hand pollinated a bit), so there isn’t much fruit to worry about.

The ones in the back have been easier to manage as:
1.) They have more space to spread on a pre-built trellis
2.) I can access the vines from all directions

Being able to approach and prune from all sides makes a big difference. The hard to maintain part of the yard has both other plants and a retaining wall making access more difficult.

There is actually one vine in the side yard which isn’t too bad- the one I have 40-50’ of trellis space for (Cordifolia). The others have 10-15’ area, but it leaves the vines too vigorous.

Even when there was a functioning male right next to it, Fortyniner didn’t produce much fruit. Now, without pollination, I don’t see any at all.

This pic is part-way into the pruning. I cut back one side really hard, as the vines were reaching both the pole on the left (which has a jujube) and the green post on the bottom left. In fact, the kiwi grabbing the jujube was what prompted me to go on my pruning rampage. The small jujube has more (and better) fruit on it that the 2 vines I cut back hard. 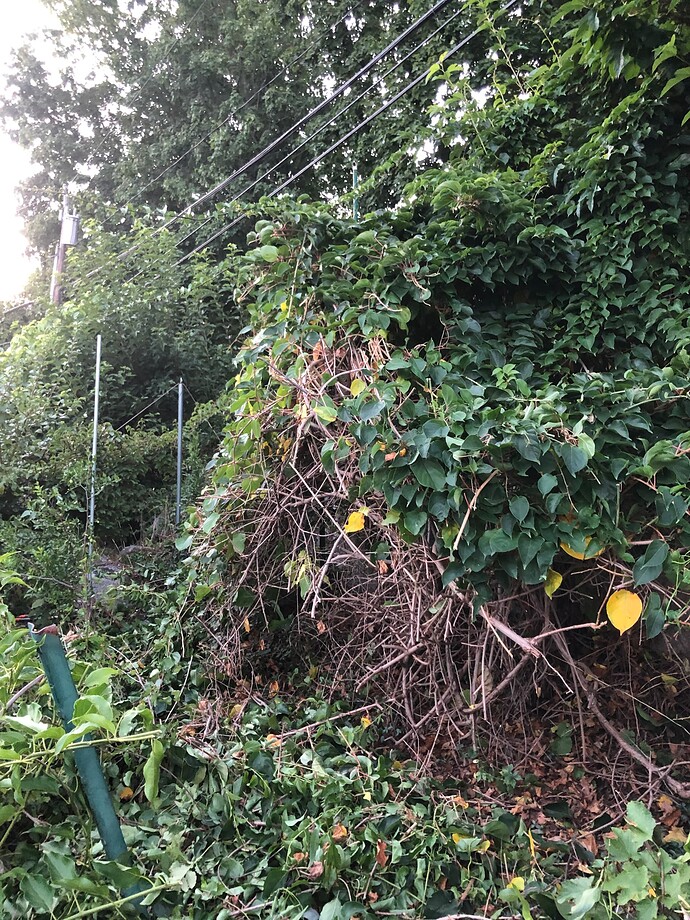 In the upper-right of the above pic you can see where the kiwi is trying to take over a mulberry, 12-14’ off the ground. After I took the pic, I spent a lot of effort yanking and cutting them apart. The kiwi got the worst of it, but the mulberry didn’t come through unscathed.

Here’s the before pic of Issai 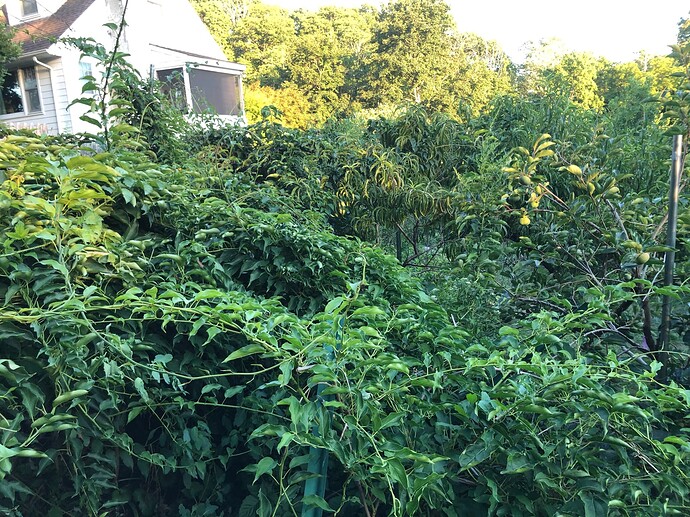 It got dark before I felt like I was really done, but this is a start. I’m not sure how easy it will be to keep the kiwi contained to this size. I actually toyed with the idea of getting rid of both, but will give them another year, hopefully with the male pollinator functioning again next year. 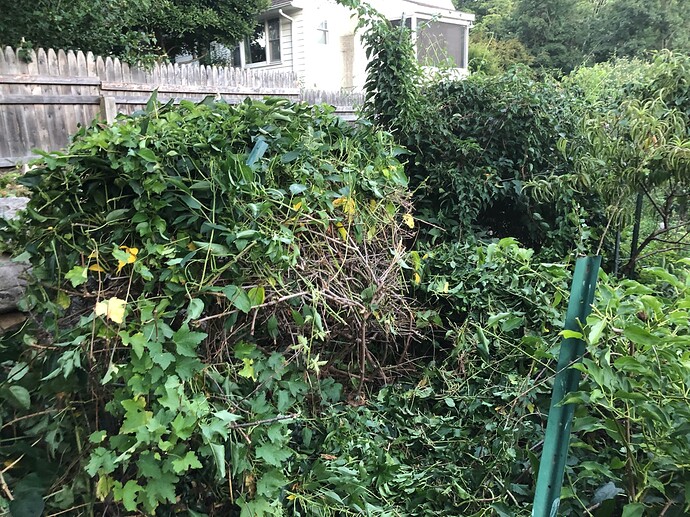 Same for the Ken’s Red. It had one or two fruit last fall, after being planted for 10+ years, but I don’t think I picked it at the right point. It has a few more now (maybe 1-2 dozen on a huge vine). If it doesn’t knock my socks off, it will likely be removed and replaced (can never have enough jujubes and they are much better behaved- hard not to be…).

Anyone ever found an easy way to productively manage hardy kiwi? Giving them a lot of space seems to help, but even so they need quite a bit of pruning.

Give kiwi an inch and …

Today I used a battery powered hedge trimmer. But the battery is a big 56volt Ego battery, so it had a lot of power. I have one hedge trimmer I can use with a pole, but it is bit of a pain, as that one is a corded model, which always make things more difficult.

I believe this pole saw also has a hedge trimmer attachment available for the quick lock system.

I’ve got a gigantic mess myself. I though the deer would help, but they don’t seem to be interested.

Since you’re at such a level of abundance I’ll mention that the tender spring shoots of hardy kiwi (Actinidia arguta) are a vegetable. Harvesting it could help to control vigor.

The young shoots should be blanched in boiling water, then drained and seasoned. 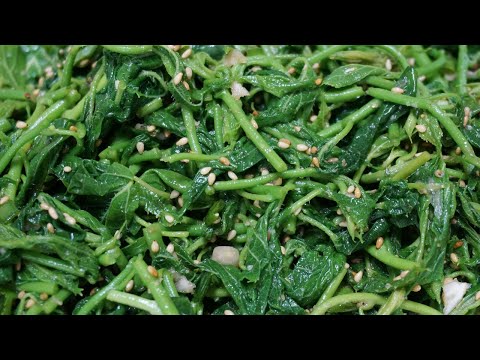 Yes heavy-duty hedge trimmers are definitely your friend if you have kiwis. Somehow my vines got more calm over the years, I used to need to trim them back a couple times a summer but now I can just prune back in the winter. What I do in the winter is start by giving them a buzz right around the trellis, kind of like the kiwi version of the bowl haircut… then I get in and thin out individual vines with the hand pruners. For the summer pruning I would just go around the trellis and cut back anything sticking out too much.