They look hairy and their “hairs” are venomous. Do not touch them.

Never saw that one here in WV.
But . Have a lot of the saddle back ones that burn like a branding iron.
Thanks for posting this , I won’t touch ! If I see one 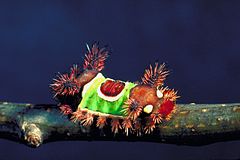 The saddleback caterpillar (Acharia stimulea, formerly Sibine stimulea) is the larva of a species of moth native to eastern North America. It is also found in Mexico. The species belongs to the family of slug caterpillars, Limacodidae. The caterpillar is primarily green with brown at either end and a prominent white-ringed brown dot in the center which resembles a saddle. It has a pair of fleshy horns at either end. These and most of the rest of the body bear urticating hairs that secrete an i...

Have a lot of the saddle back ones that burn like a branding iron.

I grew up hearing them called “pack saddles”. And yeah, they hurt! Memories of gathering corn and knocking one off, it “rolling” down your arm, stinging half a dozen times… Ugh!

Thanks! I’ve never seen a puss caterpillar in my corner of Kentucky, but it’s definitely something to be aware of. (They look sort of like Tribbles, don’t they?) I’ve also had the pack saddle experience—and they’re bad enough: an intensive burning, followed by chills. And they do like lurking in corn.

Thanks bad Journalism as always of the media No latin name

I think a native one in Texas is Megalopyge opercularis
not looked into it,

I like to freeze mine turns to juice right away, but in the field can crush it with you fingers to apply or chew.

I have a bite in Texas after sleeping outside getting bigger, and bigger put it on, and it went away.
I think it was Plantago rhodosperma though
all the species have the same smell, I have crushed with my fingers
In New Orleans they are almost the size of Dinner plates

also used as metamucial (the seeds_ (plantago major broad leaf plantain)
Plantago ovata (narrow leaf plantain is used also like all of them, *but the seeds are psyllium husks)

Oh the picture it looks huge