Hi! I just went out to my orchard today and found lots of nasty jelly goo on the trunk of one of my apricots and one of my peaches, both right above the graft and ground level. I want to scrape this off but waiting to hear from you guys. Can you use bleach, vinegar or peroxide to sterilize after scraping the bark? Do I scrape the bark off small hard sap cankers or just the areas with what I think is gummosis?

Three of my others tree are leaking sap for the first time from areas that were two year old pruning cuts - why is leaking now? These aren’t from mechanical injury as my trees haven’t been summer pruned or hit by the mower. It is a windy and exposed site, however, but with full sun all day long. We have been getting an unusual amount of rain all summer, and it’s been cooler than average as well. The trees are all on a slope so drainage is usually fine despite being clay soil. They don’t look unhappy.

I need advice on diagnosing and the treatment of these trees, how to save them and how to prevent this from happening in the future. I haven’t done a full orchard walk through yet so are plums, pears, and apples susceptible to getting this as well? Right now it’s just peaches and apricots. I’m really upset because these are all on my largest and best trees! They are two years old. None of them look even remotely stressed by their injuries.

I’ve uploaded some photos of a few problems - some trees just have a tiny spot from an old pruning cut leaking sap, but barely any. Is this a problem or to be expected?

My Tilton apricot has it the worst. You can see some of the gummy jelly stuff on the ground that I poked off with a stick to see what was going on. There is sap at several scaffolds, and also is the only one with some black fungus or something higher up at two other scaffolds. Is this black knot? It’s only in the crease of the branches, and I don’t have black knot anywhere else in my orchard. No sap on these black parts, unless it’s underneath. 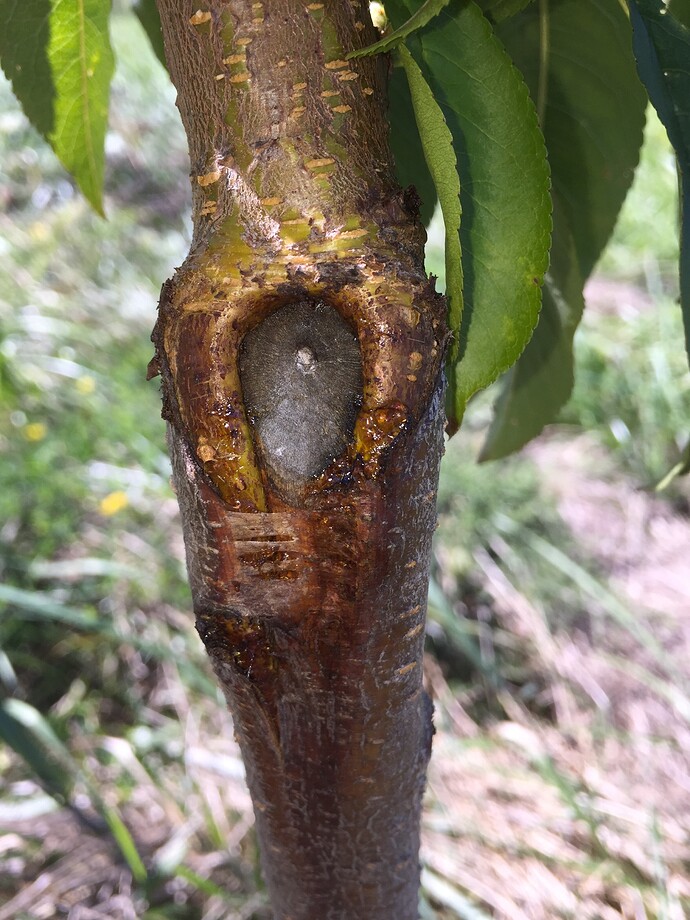 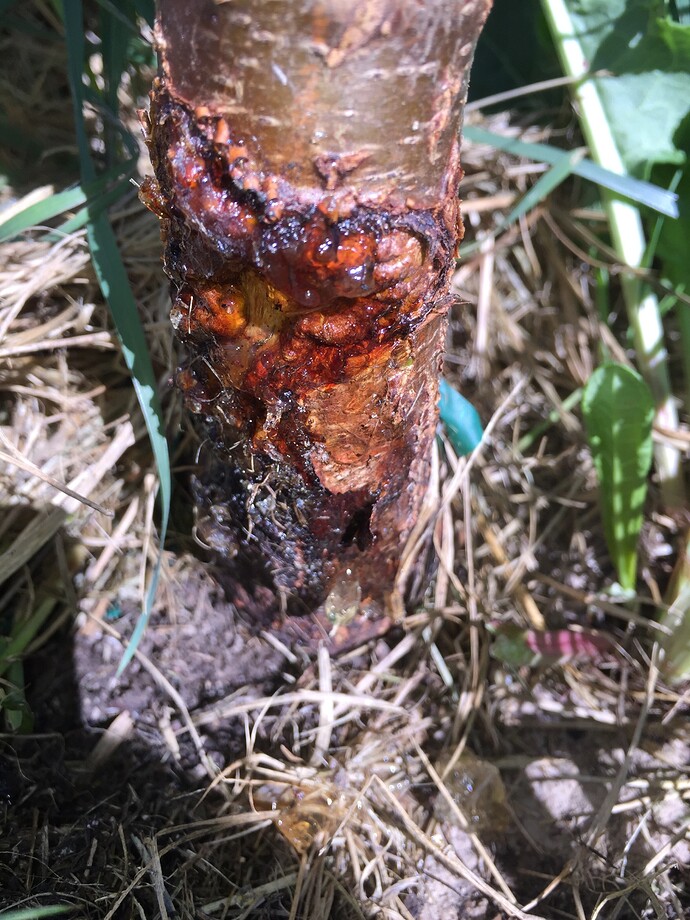 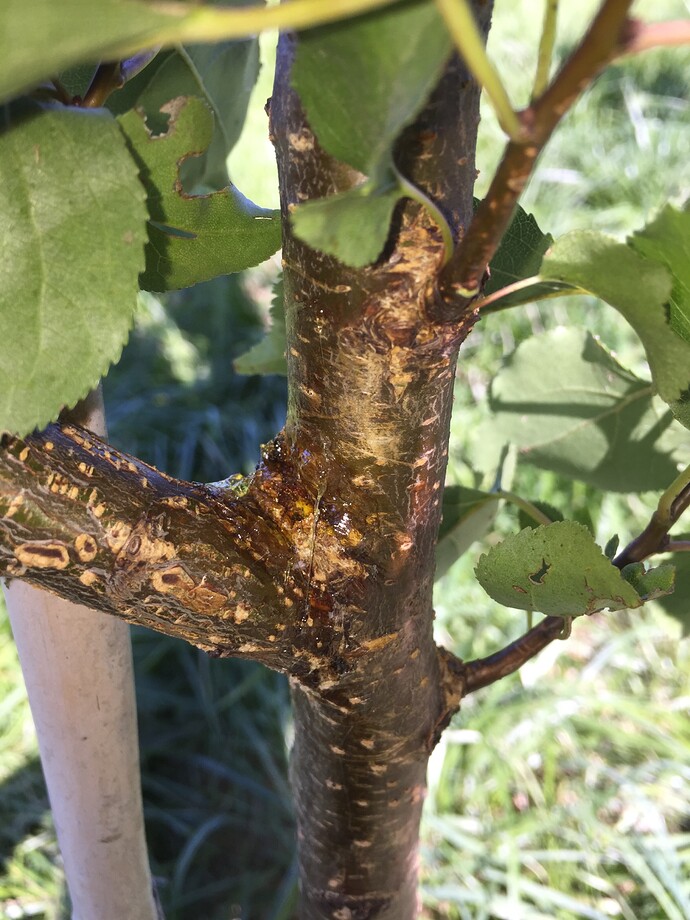 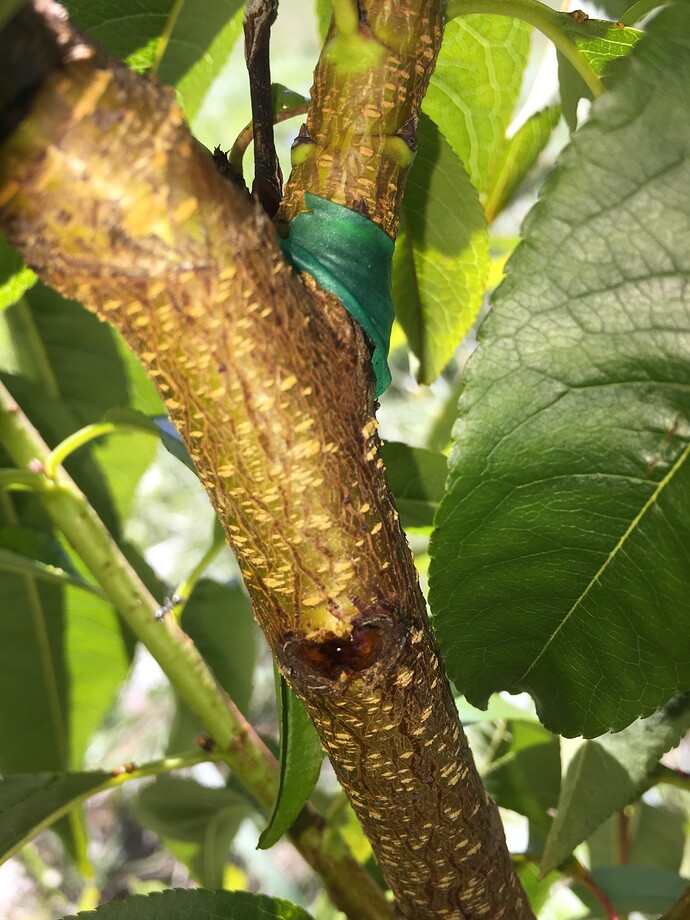 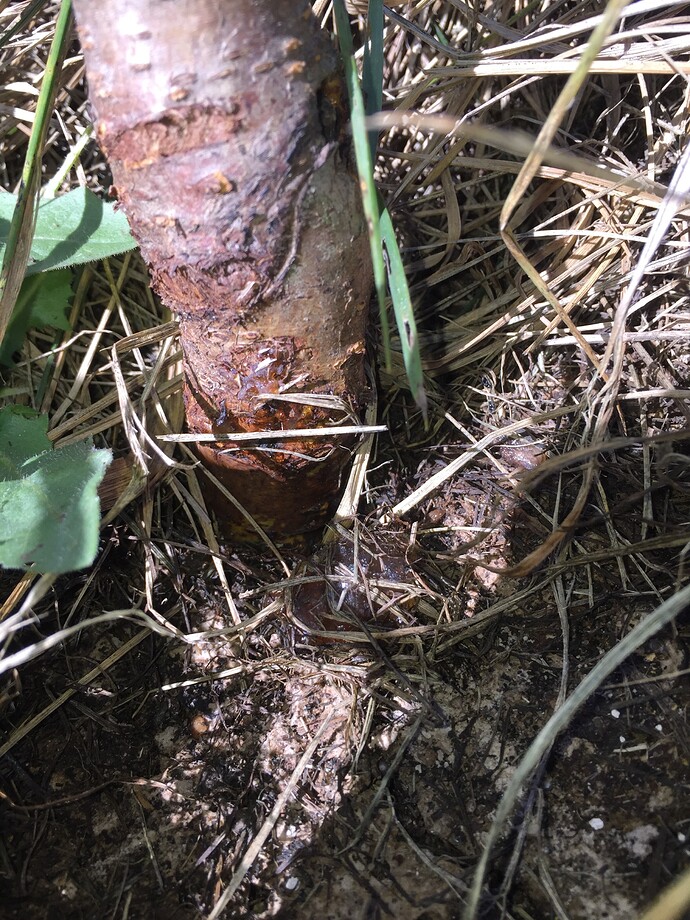 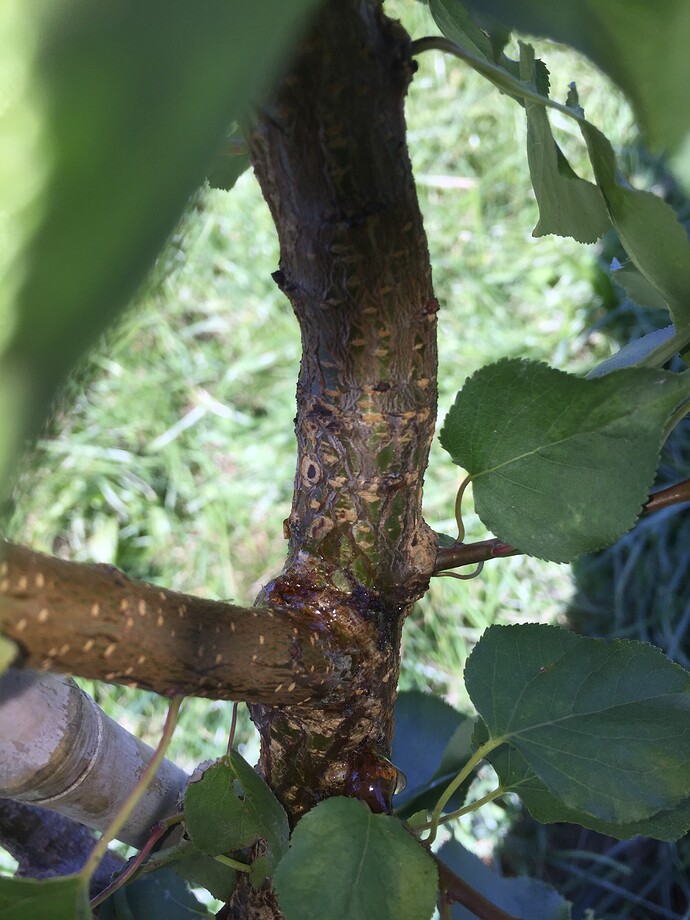 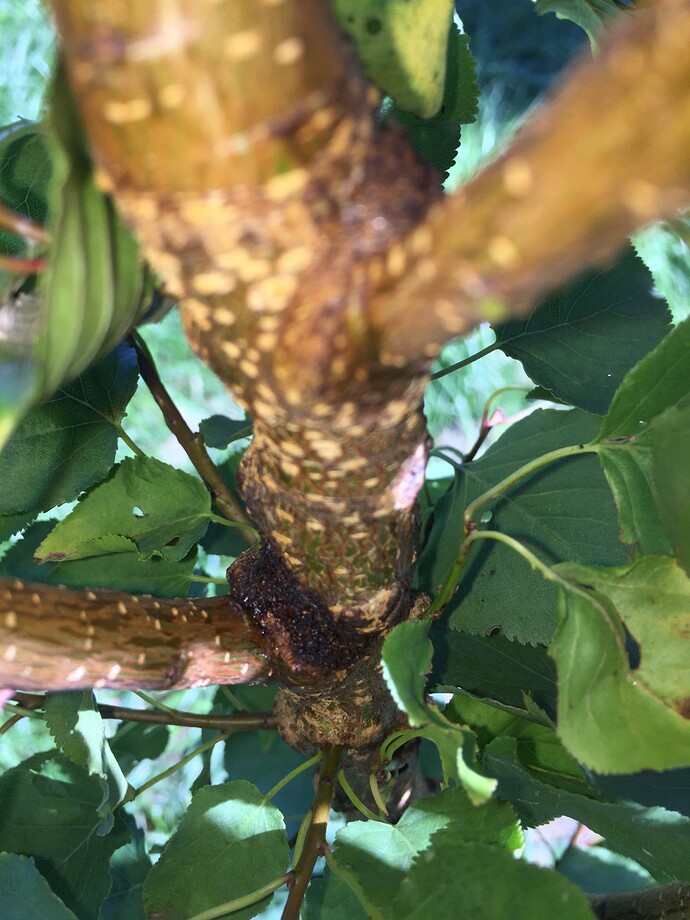 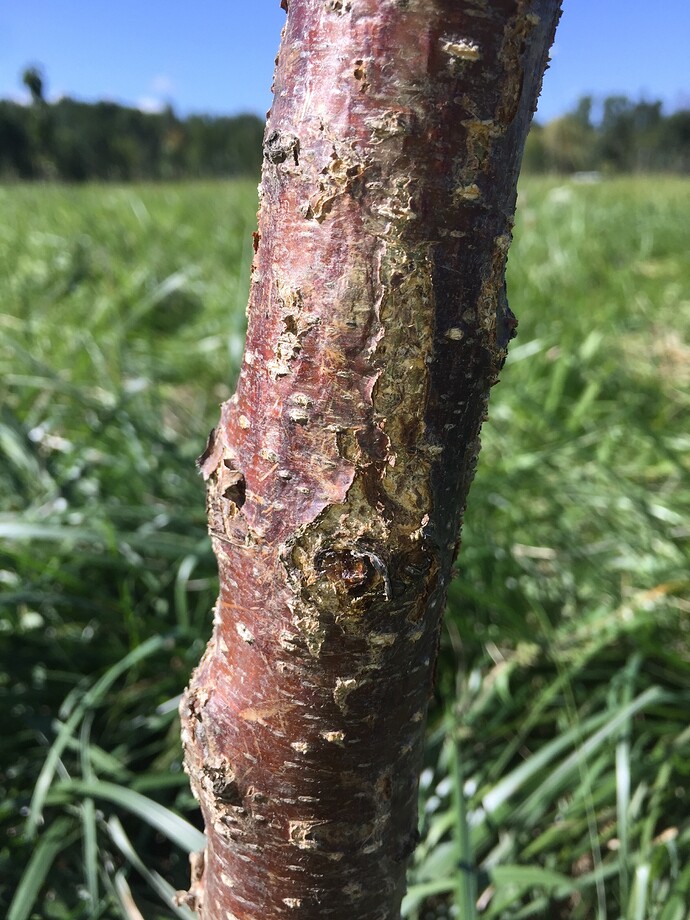 Looks like a bacterial disease. I use bacterial compost tea.
John S
PDX OR

How do I cure it?

Am I supposed to scrape off the sap and remove a layer of bark, or leave it and not damage the tree further?

It could be canker, and if it is that is when I use copper. You could also have borers,different treatment. As for the canker , I carefully remove the ooze with a paper towel. I do not remove any bark. I take a fresh paper towel and dab straight copper on the wound. I watch it for a week, then repeat. This works for me. Others should chime in .

There are many causes for gummosis. On the 2nd photo it looks very much like canker. Not sure about other photos, might be canker too but in earlier stages.

I have seen borers at the base of the trunks but canker every where else.

That bad-looking tree base was physically damaged, you can see raw wood in there and thats a pretty sure sign of physical damage (weed whacker etc). None of the other cankers look big enough (yet) for me to worry, but keep an eye on them.

Difficult to say from the photo, but it might be black sooty mold fungus feeding on sugar in the gum. It’s pretty harmless by itself.

One way to say that gummosis is due to bacterial canker is that the gum smells like beer and the wood is darkened under the gum.

I wasn’t aware of any mechanical damage

The trees should recover?

Do you have any guess what the black stuff is in the one pic on the scaffold?

How do you suggest I manage the cankers to keep them from getting worse, and will these always be weak with this problem, or do they recover completely eventually?

Just wanted to know if I had to prune that scaffold off wirh the unknown black stuff at the base - it’s on the same apricot tree you thought had mechanical injury. Would gummosis, peach tree borer, mechanical injury or bacterial canker, cause several random sap leaks ONLY at the base of scaffolds that are 2’-3’ above the ground? They don’t appear to be dark or sunken, quite normal if it weren’t for the sap! Is it normal for an infected tree to ooze sap from other unpruned and undamagd parts of the tree?

The mechanical injury is infected, that may be why the tree is producing so much sap. Sap on trees is like white blood cells in humans. If it was a cherry I would be concerned but on my apricots all of these have been self-limiting.

You’re incredibly helpful as always Scott! Do you agree with scraping off the bark and applying pure copper to the area, or apply copper without cutting anything out? Or do I paint the trunk with neem? Do I do anything to the branches leaking on the same tree?

What should I do with the sap leaking from the trees that don’t have a trunk injury to prevent it worsening?

I occasionally have canker peach trees and have never done anything for it. The canker sometimes goes away by itself, if it’s not bad. I’ve had peach trees with bad canker that doesn’t go away, and, so far, I’ve not lost a peach tree to it.

The two worst variables for increasing the severity of cankers on peach are long hard winters and poor vigor. If you can avoid those, canker is a minor pest.

Is it possible that the trunk wasn’t mechanical injury, but got infected by damage done by voles? I saw several other trees had the top layer of bark stripped by voles, just not as deep as this one. In any case, on this same tree I found two borers with half their body sticking out, didn’t know they tunneled that far up the tree. The black stuff at the crotch I think was old frass. I only noticed two borers though - no borers at all the crotches that were leaking. Is that just a stress response to being dug in some area?

Yes, it probably was voles. I meant physical injury, not necessarily mechanical. Sap is a response to stress, I don’t think the holes per se would cause stress but the infection of the wood would.