Have had this deficiency the last few years on and off on Asian pear and Asian persimmon. I had assumed that it was iron chlorosis but chelated iron foliar spray bring minimal relief. So what say you old hands. Im thinking magnesium deficiency… 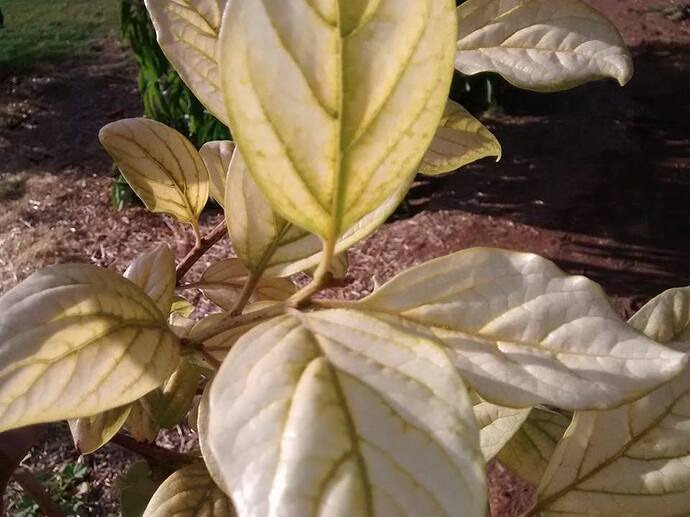 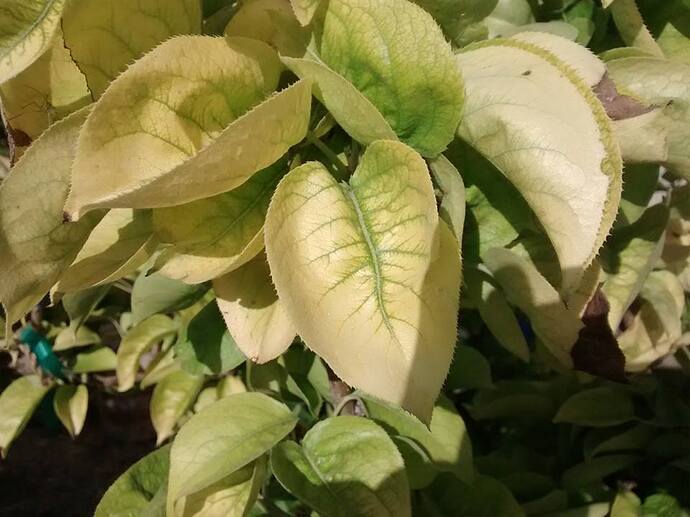 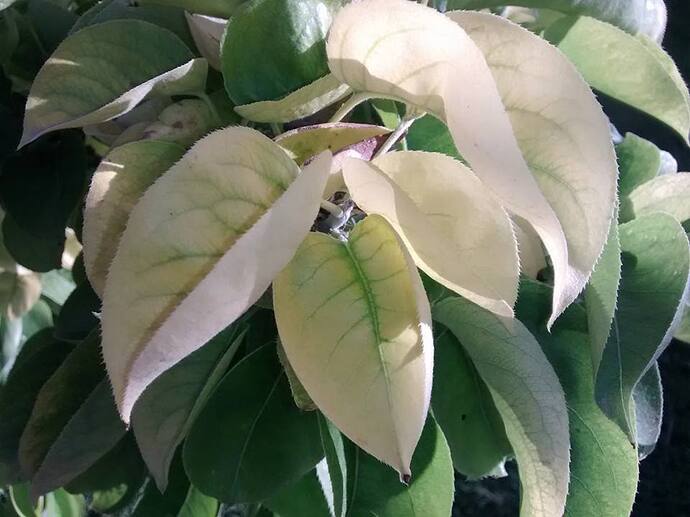 Probably iron chlorosis. The chelated foliar sprays don’t help much. Doesn’t green up leaves that look like that. You’ll have better luck applying the chelated iron to the soil before deficiency symptoms show up.

Does this happen after irrigation? Around here it happens during wet rainy weather in summer. We don’t get enough rain in spring to cause issues. So it’s related to wet soil.

EDDHA Iron chelate as a foliar works great for me. If it is not working then I’d suspect some other agent is blocking nitrogen uptake.

You could hedge your bets and go ahead and mix up some Epsom salts in warm water and apply as a soil drench. If it is magnesium deficiency I think it will respond rather quickly. If it’s not, I don’t think it will be of any harm.

What about spending $34 bucks and getting some foliar testing done? Visual determination of nutrient deficiency can be a tricky thing to do.

As Matthew mentions, I’d probably do some foliar testing to make sure. I use A & L labs. For about 25 bucks they can tell you what is going on.

I’m using ZMC Express as a foliar nutrient spray for the first time this year. Our peaches have some Mn deficiency. Manganese sulfate is cheaper to spray but I thought I’d give chelates a try. Chelates are supposed to be more easily absorbed into the foliage.

I’m not following you on this. Chelated sprays are supposed to be very effective in relieving nutritional deficiency of micronutrients/trace minerals when soil applications can sometimes be ineffective. I’ve read (with peaches) that adding Mn to the soil will not necessarily remove the deficiency (Our soil tests show adequate Mn in the soil but a deficiency still exists in the foliage.)

As you mention, many times a deficiency is due to too much water so that the roots can’t absorb the mineral, no matter how much of the mineral is available in the soil. Likewise with iron chlorosis, most of the time it’s not a lack of iron in the soil, but a soil pH which makes the iron unavailable to the plant. I know you are aware of all this, which is why I was puzzled by your comment.

Chelates can be added to the soil and supposedly show a better response than other forms of iron, but most publications indicate adding chelates to the soil only provides a temporary response and is not cost effective (at least on a commercial scale).

We use sequesterene 138 chelated iron as a foliar on some of our tropicals that get chlorosis and it greens them up nicely. Yet it doesnt seem to do much for this persimmon or asian pear. Thats why I was guessing it was something other than iron. But its possible that they dont uptake it well thru leaves for some odd reason and I need to apply as a soil drench. BTW, I dont know if you can tell from the photos but not all of the leaves show this on either tree. Just some branches. The suggestion on a leaf analysis is a good one. We have a lab we use that can do it, just was hoping it was simpler than that.

I know the why…we have high pH soil here. 8.3 usually. A pH that high is a problem when it comes to nutrient uptake. Many nutrients are locked up in a form thats hard for plants to get at. Thats why its SO damn important here not to be willy nilly with rootstock choices. We have improved rootstocks for stonefruit that handle it well. But there isnt alot of improved rootstock for persimmon and asian pear and we are stuck with what widely available. So thats the why.

My experience spraying foliar for iron deficiency is that on fully developed leaves the spray has little to no effect, ie it doesn’t green up. On small just developing leaves it will help. Where I’ve applied chelated iron to soil before the deficiency becomes severe the results have been much better. For the later mix a tablespoon or so in a couple gallons water and apply to base of tree.

Same thing with zinc deficiency. Once the leaf has the symptoms and is fully expanded no spray has changed the appearance of the leaf, chelated or sulfate.

I don’t claim to be highly experienced but have dealt with this on several occasions.

OK, that makes some sense. It’s been a while, but I believe I recall reading the same thing. That is, for some mineral deficiencies it’s important to have the mineral available early in the growth cycle when leaves are developing.

I thought pH was probably your issue. Interesting to know rootstock selection was so important for your area. Here, we can pretty much choose rootstocks willy nilly (as long as they are in a raised planting and size control isn’t an issue). Each area has its unique growing challenges.

The nutrient availability chart says it all. There is a strong reason plants love a neutral pH. We have gone through huge measures to decrease pH but in our calcareous soils nothing works for long. Years ago we applied 300 gallons of N-pHuric (basically a stabilized sulphuric acid) to a 200’x300’ area in our irrigation water. The result? A dip to 7.5 then back up above 8 within 6 months. There is just too much calcium carbonate in our soil and it effectively buffers the pH right back up. It is possible to burn up all the calcium…but the 300 gallons cost me over $1000 and its unclear just how much more it would take. Likely around $8000 worth…just for this area.

But as a commercial orchardist friend said to me, why? When we have rootstocks available that can deal with the native conditions? And as usual hes right. Except for the varieties that we dont have improved rootstock for. Like these two. 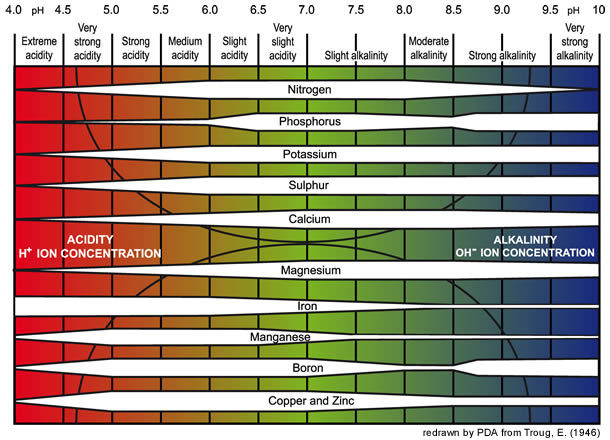 I believe that is the case when the plant is also internally low on Calcium.

Eric, this is off topic, but how the heck to you grow blueberries there with such a high pH?

Potted in a high peat container mix and using reverse osmosis water. But honestly I tired of the special maintenance and let them go. Im not much of a container grower.

That makes sense. You already have a lot to juggle with all that you grow.

I’m not a huge fan of containers that aren’t self-watering, but blueberries are worth the extra effort. I’m totally sold on EarthBoxes for lots of other things though.