Help me identify this wild plant

Have another plant that is my nemesis here in Kansas. It’s a plant that wants to live so bad and it’s so good at it I would love to find some redeeming qualities. It’s perennial and it spreads by roots underground and seed which looks similar to broom corn or milo. My first question is what is it? This cowbird of the cornpatch has survived many weedings. If you don’t know what I mean I mean by cowbird it’s a bird that lays its eggs in another birds nest Brown-headed Cowbird Overview, All About Birds, Cornell Lab of Ornithology. This plant looks much like corn and sorghum so it avoides weeding. It grew in my sorghum as much as nearly 30 years ago and still we fight it. It occurred to me today it makes grain and some basket weaver or paper maker might consider a perennial like this gold. The seeds it produces are unremarkable but it could be bred to make a perennial invasive grain. This is this weed after I mowed it down , pulled it up, chopped at and still it looks great. 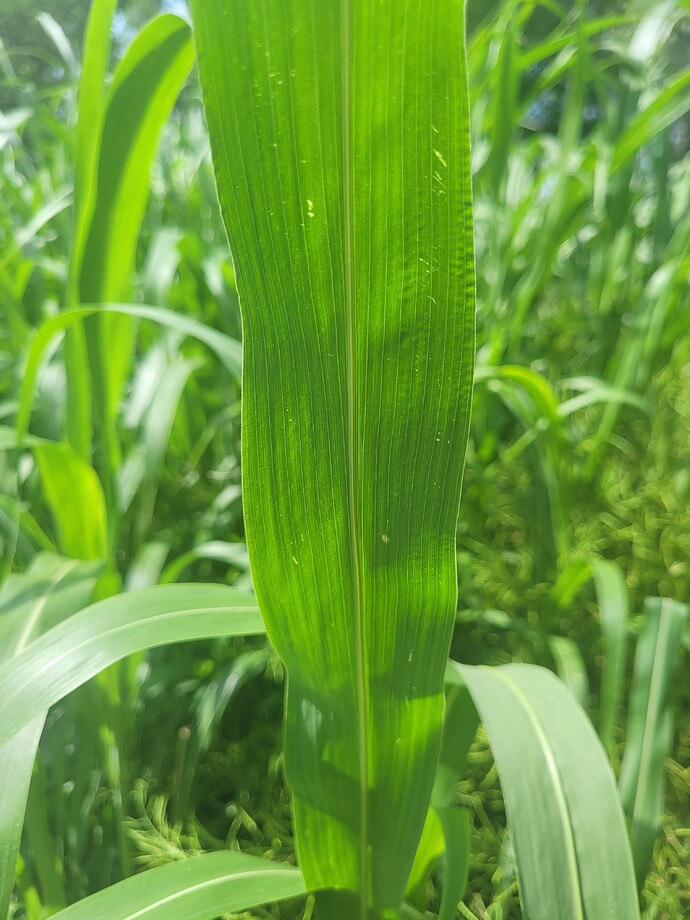 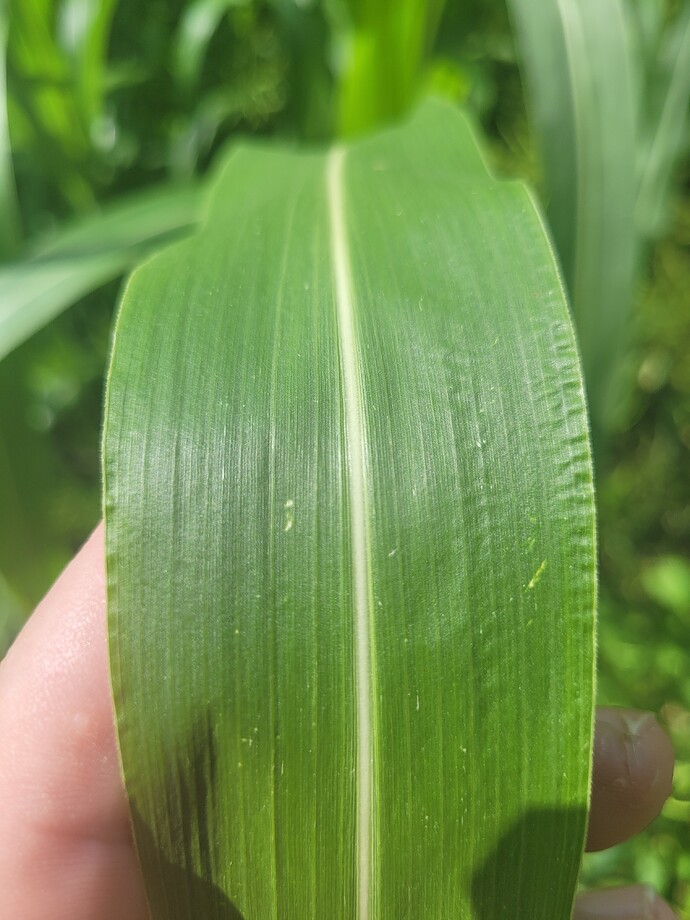 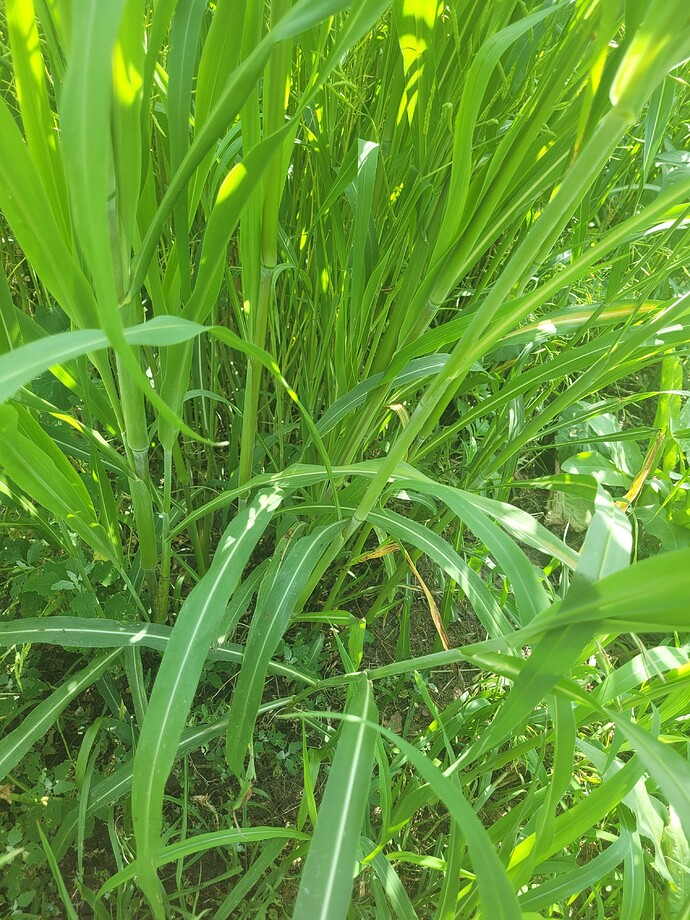 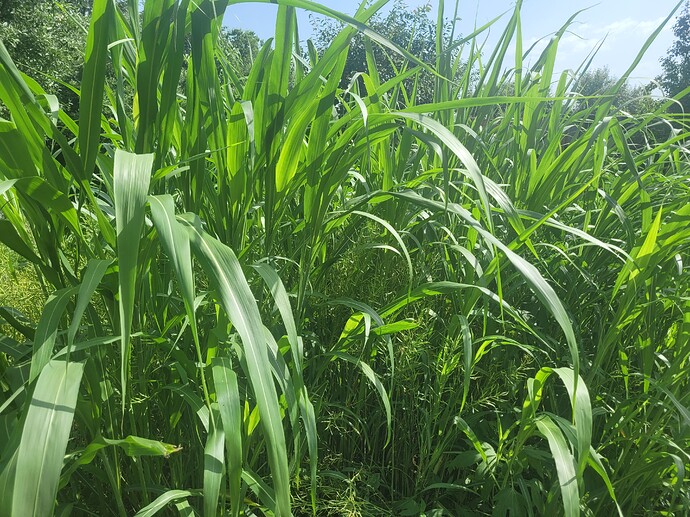 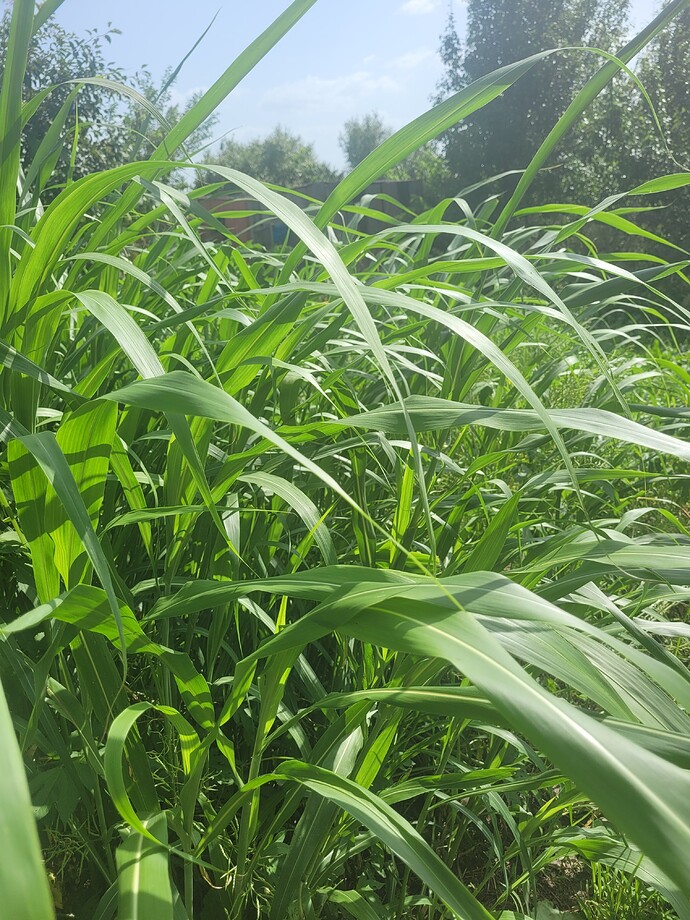 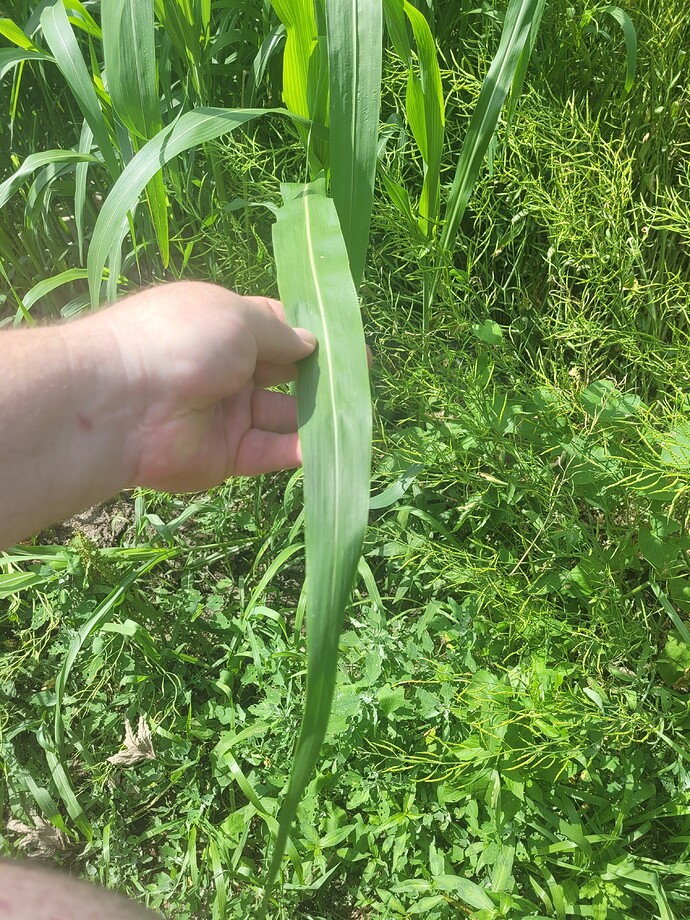 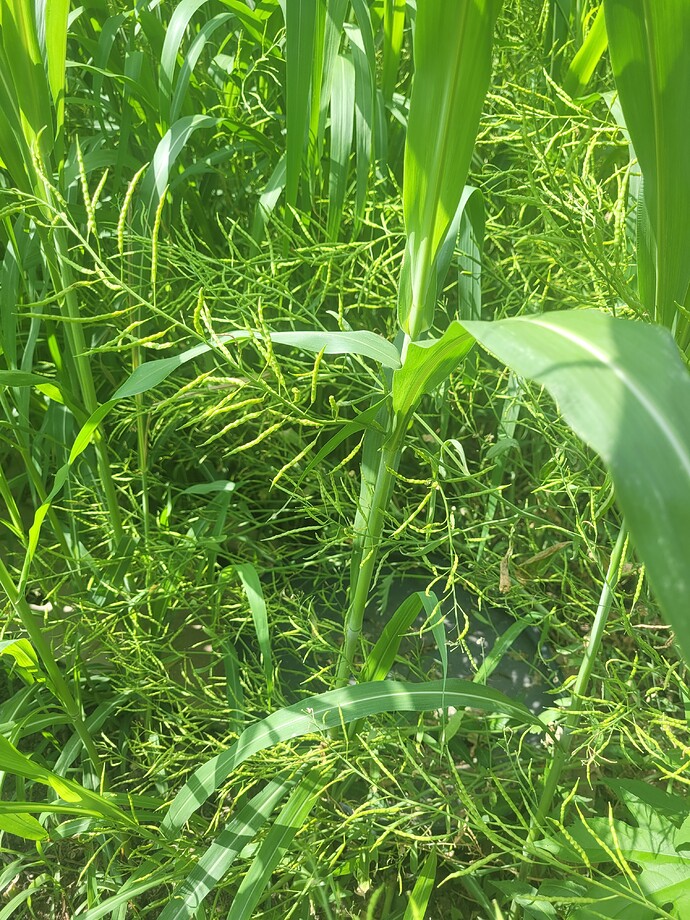 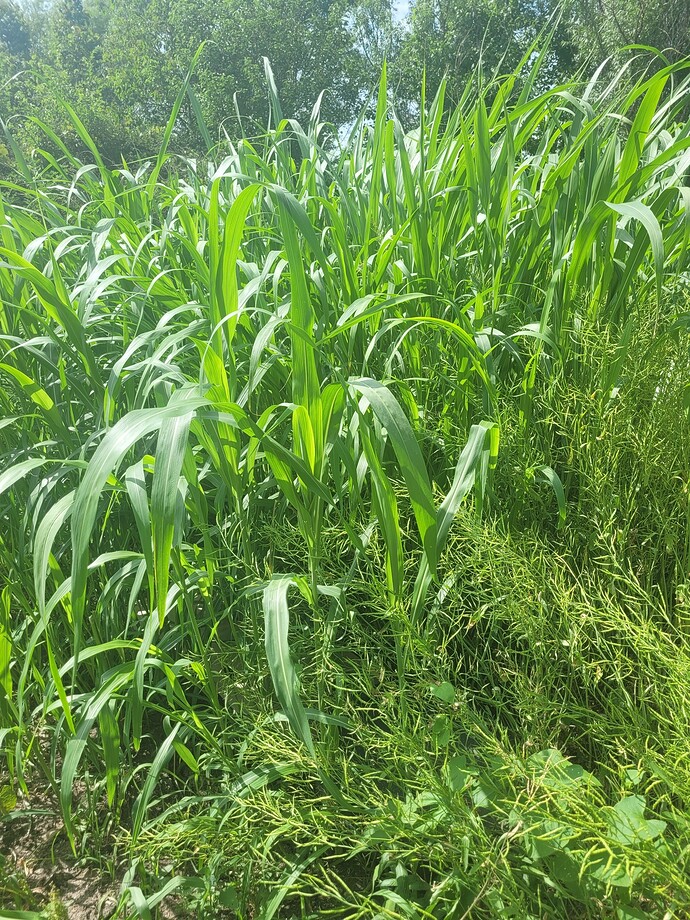 My suspicion is it’s a leftover from days long ago in this area in the early 1900s when they grew broom corn and it’s a perennial relative. Likely a member of the sorghum family. My suspicion is farmers never know because they use Roundup each year it’s a perennial. It likely grows wild here everywhere but Noone knows that. The line down the leaf looks like broom corn. It gets a seed head similar to broom corn. 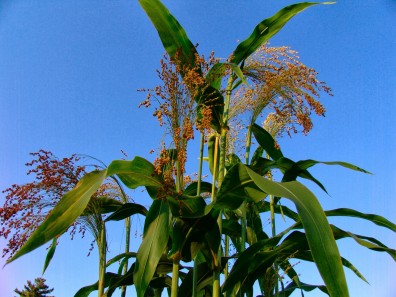 Broomcorn (Sorghum vulgare) is not actually corn, but is instead related to the sorghums used for grain and syrup (Sorghum bicolor). Broomcorn has a coarse, fibrous seed head that has been used to make various…

May have identified it finally it could be Johnson grass.
Johnson Grass (Sorghum halepense) 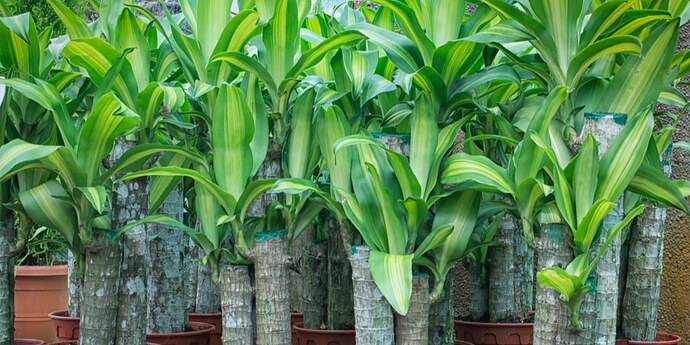 The seeds don’t look right it may be a hybrid

Johnsongrass - Field Guide of Invasive Plants and Weeds in the Southwestern Region.

My dad said geese would root it out. I learned to handle a scythe on our back lot of the stuff!

May have identified it finally it could be Johnson grass.

Sure looks like Johnson Grass to me. If so, good luck… Bout gotta go nuclear to control it…

Start a bonfire on top of it would work but some always gets away. Roundup work on it?

Sure looks like Johnson grass to me… we have plenty of that here in TN. It grows 6-7 ft tall.

It has good nutritional value for grazing animals… but for a week or two after a killing frost … it can kill cattle if they consume too much of it.

I think every hay field I hauled hay out of as a young man around here had several patches of Johnson grass in it. Got some in my field now. It makes good compost add when not seeding.

RoundUp(Glyphosate) is pretty good on about every type of grass I’ve tried it on. Better at narrow leaf grasses than it is broad leaf plants seems like. It’ll probably take care of Johnson Grass.

It’s likely Johnson, unless it’s eelgrass, boy are very invasive and are look alikes. Both grow in wetland or lowlands near a stream, but Johnson can grow in uplands as well. You may need to consult your county extension agent who should be able to help.
Dennis
Kent, wa

Unfortunately, Johnsongrass is in the sorghum group and typically shows red streaks on the leaves at this time of year. There is a distant relative of maize that might be the culprit. It is aerenchymous, invasive, very difficult to kill, and can actually be hybridized with maize under some conditions. Look up Tripsacum (aka gamagrass) and see if that is what you have.

By the way, you can diagnose Johnsongrass by digging up the roots. It forms long branching rhizomes that permit it to grow back year after year.

No doubt in my mind that it’s Johnsongrass.
While it’s the bane of crop producers, I love it in a pasture sward - and the cows do, too! Whenever the cows move to a new paddock, this time of year, JG is THE FIRST thing they eat, followed by crabgrass… all other forages take a backseat to those two species that many folks regard as noxious weeds.
Fortunately, both JG and CG are very nutritious. Nitrate accumulation in drought conditions on well-fertilized fields of JG can be an issue, as well as prussic acid (Hydrogen cyanide) in freshly cut/frosted/damaged JG… but the HCN will sublimate off as the JG dries… whereas nitrates will be retained (and increase in relative concentration) as the forage material dries.

Clethodim is labeled to control Johnsongrass. You need to hit it when it’s 10" or shorter however.