HELP! What is this on my plum tree?

This ‘stuff’ grows on all of my trees. It is moss-like. Should I be concerned? Does anyone know what it is? Is there a way to get rid of it? I took this pic today - and blew it up so maybe someone can identify it. Thanks.! 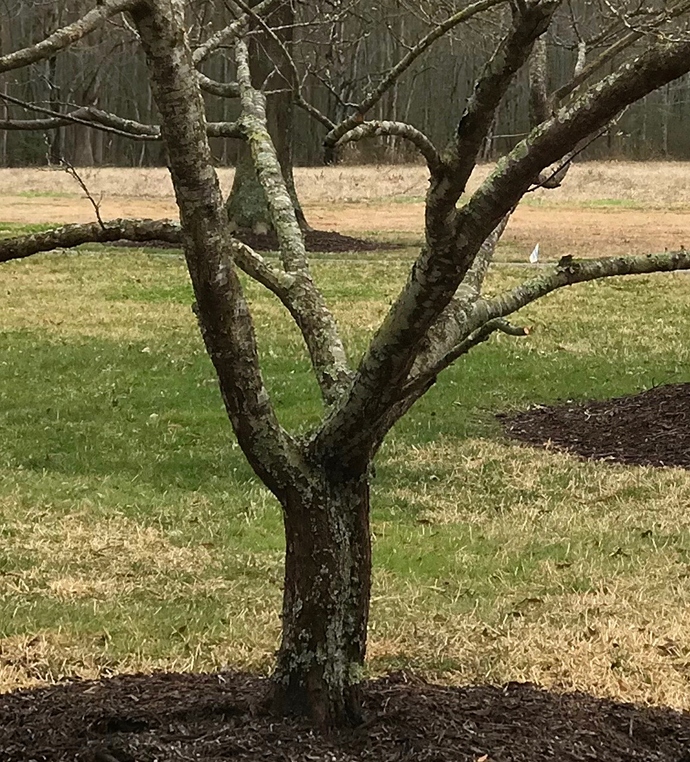 It looks like lichen to me. Not a real concern as far as I know. It grows on trees around here, usually on the north side of them.

Wow. Thanks for the article. I’m relieved to know that this stuff won’t harm the trees. I may try the copper-sulfate spray when it warms up some. I really would like to be rid of it . . . but it may be a losing battle.

I wouldn’t not go changing your tree’s eco system based on aesthetics. Lichens could be doing for the tree what white latex does to protect from sunburn. Or it having colonized the tree protects from bacterial cancer or fireblight if it where a pome.

Just Lichen, it’s harmless. Lichens are a composite organism of algae and a fungus in a mutualistic relationship. If you spray something on your tree that will kill the Lichen, you may end up harming the tree harming the tree as well.

It is just lichen-- a hallmark of a healthy humid ecosystem. It is totally harmless, and some like me would say “beautiful.”

Copper - however - is highly toxic.

Lichen does not harm your tree.

However, it only grows on slower-growing trees, so it MAY be a signal of a problem with the tree if the tree is a naturally faster-growing one. But it is never the cause of the problem, nor is it making it worse.

However, it only grows on slower-growing trees, so it MAY be a signal of a problem

A good point, but mature trees are usually slow growing, which helps them live longer, as long as vigor is adequate to keep ahead of the cancer of encroaching fungus, always at work against old wood within an aging tree. I mention this because the photo looks to be a quite mature E. plum, which slow down with age, here. Of course, age will eventually kill all trees, and plums are not especially long-lived- at least in the NE.

This tree is at least 20-25 years old. We planted it so long ago, that I really didn’t even keep track of what the variety is. It’s a small yellow-green plum. White blossom. But, as you can see - spraying it and pruning it were very haphazard. Now, I have more time - and have gotten very interested in taking better care of it . . . and the other poor orphans around here!

@VSOP - you mentioned slow-growing. I put in a Ginkgo tree (which I don’t think has ‘moved’ an inch since it was planted) 2 years ago! And it is covered with lichen. Also . . . all my dogwoods.
Crepe Myrtles, too.

I’m glad to have an answer to this. Thanks.

After pruning it - I saved some of the smaller branches, to force. So pretty. There is also quite a lot of damage, which I don’t think could have all been caused by rubbing. What do you think? I tried to cut back to outward facing buds - below the ‘wounds’. 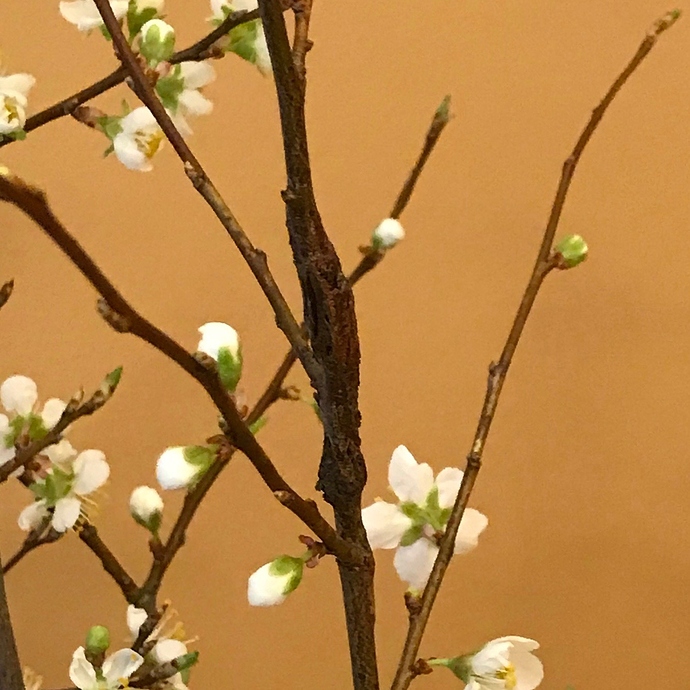 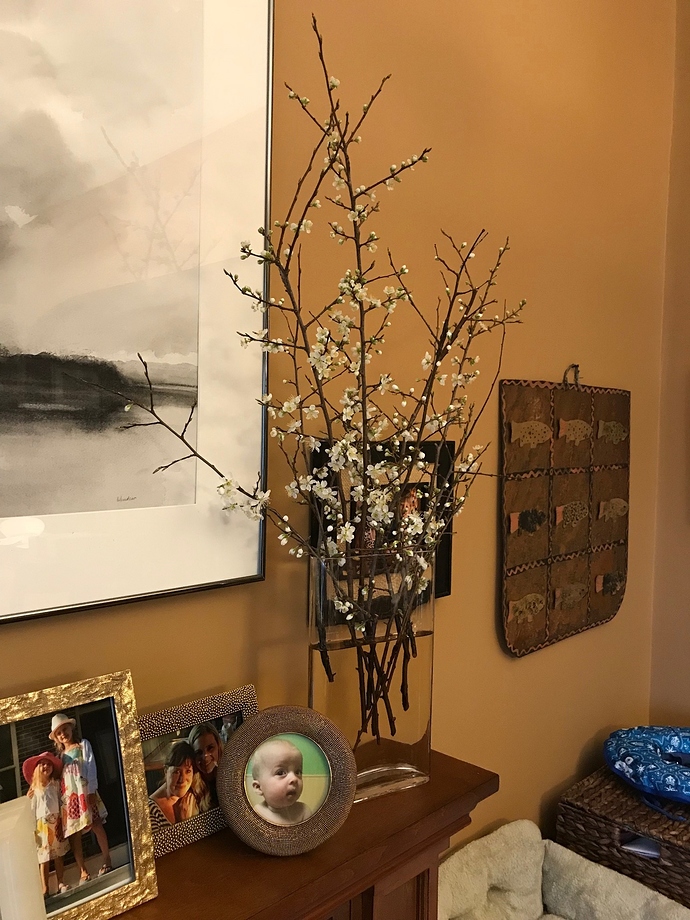 Lots of lichens usually mean fairly clean air. So congratulations on that. LOL!

Alan, does it look like a European Plum? What are the signs of that?
It probably is . . . because I have not seen a J plum that bears fruit that looks like this one.

There is also quite a lot of damage, which I don’t think could have all been caused by rubbing. What do you think?

Here are two more shots of it. UGH. I hope it’s not some awful disease. 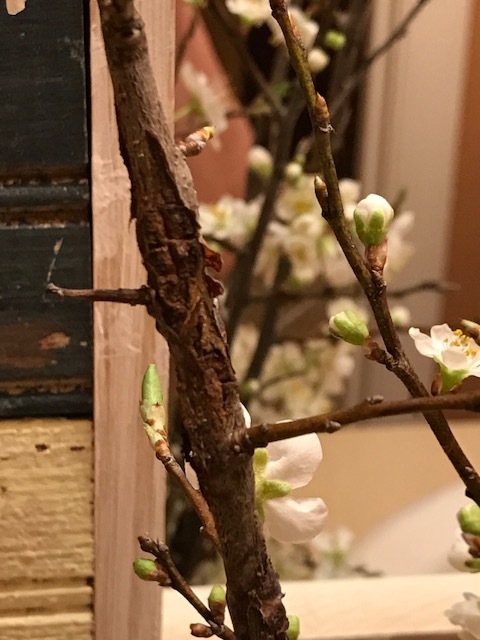 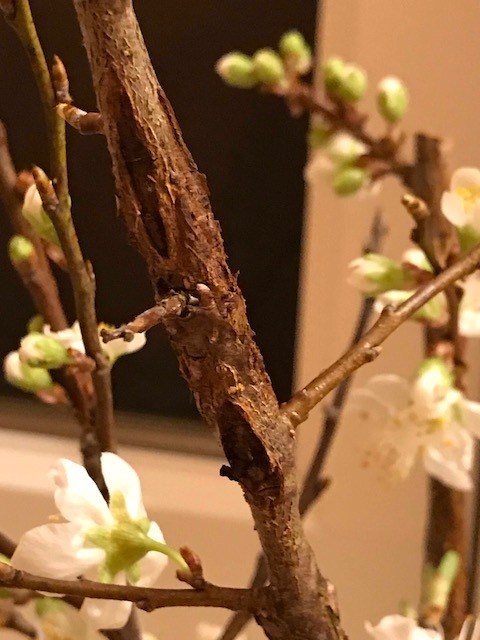 That could definitely be it. We have lots of them.
thanks so much. Karen

Looks like a E. plum. You asked my advice about favorite plums, but I wouldn’t have guessed that you’d have good luck with a E. there. Mostly as far south as you in the humid regions people have most success with Japanese plums. Scott has written extensively about his favorite plums in Maryland- that might be your go to for advice. You probably would go wrong with a Satsuma, though.