I don’t use a ton, but any excuse to have more plants works for me. I grow Mexican Oregano to make chili powder. I use it for any recipe that calls for oregano. This plant is three years old. Brought in for the winters. (Lippia graveolens) Not a true oregano. 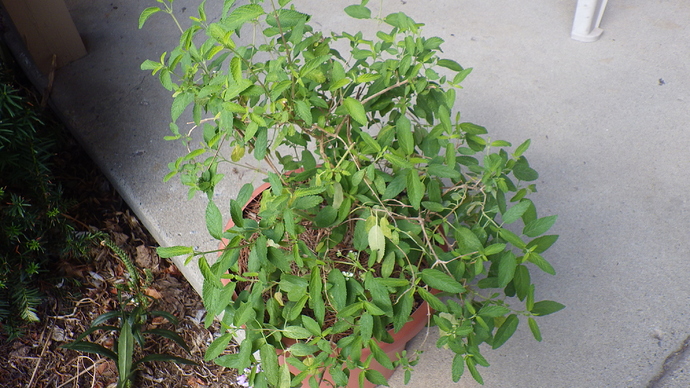 001.JPG2947×1658 1.84 MB
I also have Mexican bush oregano, many plants are used in Mexico for oregano.
(Poliomintha longiflora) Both plants are small, I almost lost them this last winter from a white fly infestation. Cut back severely to regrow. 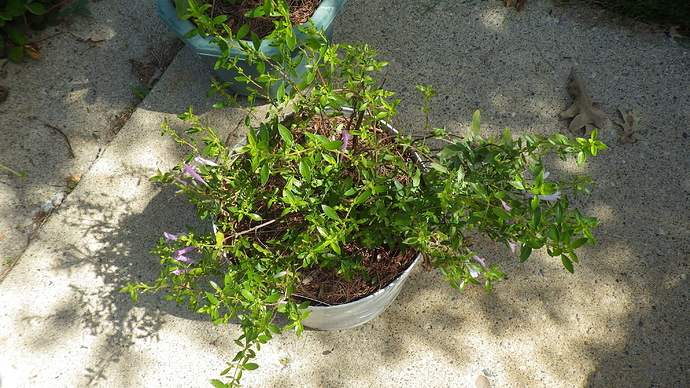 I have kept some chocolate mint in this pot for three years. I need to remove 80% and let it regrow. 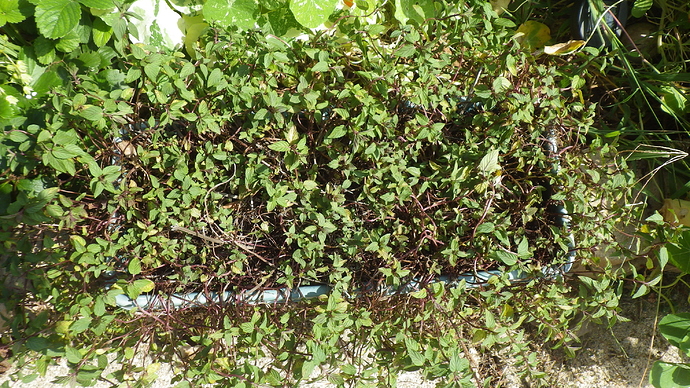 I like the mint for adult beverages, and in tea with Magnolia Berries. One of the 50 essential Chinese herbs. I just harvested these today. 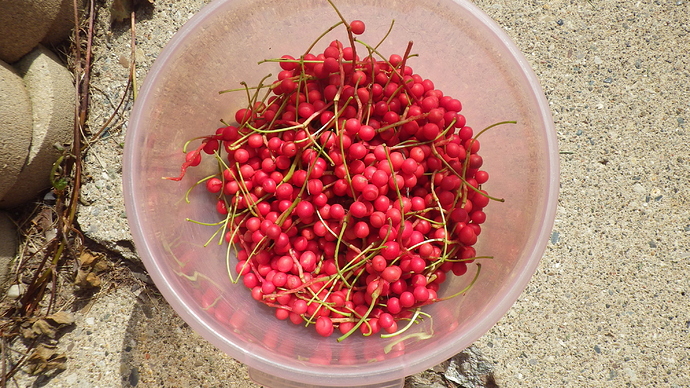 I grow a few others too. What do you grow?

Do any of the mints stand out? I grew lemon basil a couple years ago, and it was good. It did taste like lemon and basil. I was thinking on fish with some good black pepper. All of my herbs look like ratty weeds! A tough year here, very dry, and I’m never here.
I also grow African Blue Basil. As it never dies. Many do not like it for culinary uses, The leaves are thicker. I happen to love it. It keeps a strong flavor. Often basil is added too early to dishes, and loses most of it’s taste. African Blue holds up a lot better, I like it a lot.

Banana mint may be my favorite as far as smell, it has a very unique and complex smell. I don’t really smell bananas but my wife says she can smell bananas when she smells it. Cotton candy mint stands out as far as being my worst grower and honestly it’s not worth what I paid for it. Ginger mint smells like ginger and is variegated.I’m a huge fan of variegated plants so I like it a lot. Jim’s fruity mint has tropical fruit like undertones and taste great in teas. lime candy mint smells a lot like limes. Chocolate mint smells like peppermint patties but it’s not a good choice for tea but could be good in ice cream. Spearmint has a basic mint smell much like toothpaste and a similar flavor. I used to have pineapple mint but I lost it about 2 years ago and never replaced it, it’s variegated also.

I grow apple and pineapple mint, the latter is variegated and both are much more fruit flavor than your typical mint. I also grow a mix of citrus flavored basil and thyme that I use at home and in the restaurant. Oregano, rosemary, chives, parsley and sage round out the rest of the garden

Drew, those oregano look awesome. I love growing herbs (and using them, and making my own blends) but I never paid attention to the variety on my oregano. I think it is just plain Italian oregano(?). Not so much of a connoisseur there.
Let’s see I grow basil (‘holy’, plain(?), lemon, lime), ginger, cayenne, turmeric (1st year trying this, may bring it in since I got it started late), galangal (crazy about this one - also new this year - will harvest some and over winter one), lemon grass (must for egg drop soup, LOL), garlic chives, parsley, dill (seeds and ‘leaves’), bay laurel, rosemary, Curry leaf (needs to be brought in but the flavor is amazing), sage, thyme, cilantro, and paprika.
Whoops, maybe you just meant leafy herbs. Oh well. There’s my list.

I have a super vigorous mint called breathe that was found in northern Mi. It’s not a culinary mint, it’s purely sinus clearing.

I had a hazelnut iced-latte mint that I lost a couple years ago…and haven’t been able to replace.

Lovage on steroids. I have a rosemary and eucalyptus pot that comes inside and I usually lose one or both to the dryness or root rot.

I also am growing wormwood…for some reason. I think i have oregano or thyme…it comes back every year…bees love it.

Speaking of bees…man do they love herbs.

I also grow rosemary forgot all about that one.

I also grow rosemary forgot all about that one.

Me too, also thyme.[quote=“Moley, post:5, topic:7237”]
I grow apple and pineapple mint, the latter is variegated
[/quote]

I too like variegated plants. I had Cuban oregano, which I hated the taste. I killed it by putting it outside too early. It’s a succulent, variegated too. I have a small piece I’m trying to nurse into a new plant.I hate losing plants! I want it as a house plant, not to use for cooking. The name is Coleus amboinicus var.
That mint sounds tasty, the pineapple mint. I may try that thanks!

I tried rooting variegated blackberries this past spring but the cuttings failed and I no longer have access to anymore.

Does anyone have tricks or tips for keeping herbs going through summer heat? I clearly haven’t figured out the right location in my yard to get herbs going well in the spring without them burning up by July. I managed to keep a little basil going in a pot, and some rosemary in the shade in the front. I had a lovely large clump of parsely which dried up, and I can never get cilantro growing even though we eat a bunch of it. I’m just not enough of a green thumb to get a good southern herb garden going.

Hey Ryan,
EVERYTHING in pots can dry up in the summer heat. Was your parsley in a pot? I’m in z7 too and I even lost oregano in a large pot because I forgot to water it during a dry spell. I have found it most successful to make a small well-mulched area for growing herbs in ground - not necessary to be full sun in our zone. Well-mulched, not only to modulate moisture, but also to prevent dirt from splashing up on the herbs during hard rains. I use pine straw as it is readily available and free. If you live in a dry area, you can run a drip line around the bed and under the mulch for occasional watering.

I seed things like cilantro (actually most herbs) in what I call germination trays which are shallow cottage cheese-sized cups. Here you can control the temps (important for good germination rates), moisture and reduce insect damage until large enough to plant out. Once I had a large outside pot of cilantro beginning to germinate when a heavy rain came through and wiped it out. I think 1 grew. So the small (portable) trays can easily be protected from such things until you have a viable plant.

EVERYTHING in pots can dry up in the summer heat.

I wasn’t clear. Everything is in the ground or a raised bed. I put some basil in a pot in the shade of the back porch and that I kept alive but slowly growing. Now I rooted some cuttings and put them into a new raised bed that gets a ton of shade, and it’s taking off so I am hoping this new bed on the retaining wall I built for my relocated pond is going to be the right spot.

Harvested the ginger. The single little knob on the right grew into the rest (2.25# after trimming) In the center is a flower coming up. This is the first time I’ve grown them in ground and I think they did much better - certainly in terms of production. 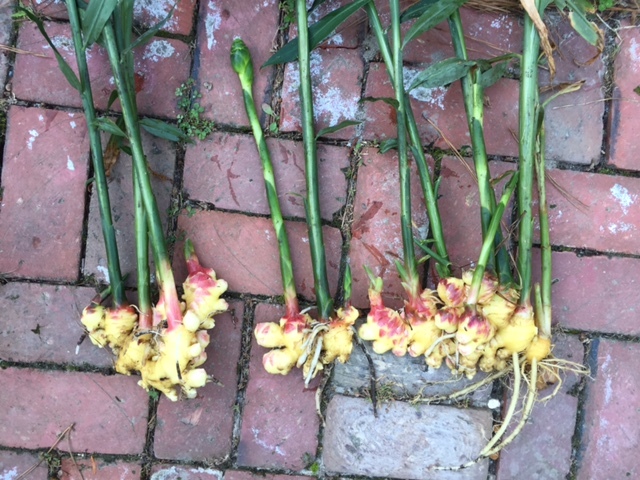 I have 4 more plants to dig. What was I thinking.
Gonna experiment and leave one and see how it does with the first frost. Then mulch it heavily and see what happens in the spring. Maybe I’ll try harvesting a corm from it in January. Also will leave some lemongrass in same way. The galangal and turmeric are coming inside as their roots are still kinda small - got a late start.

@JustAnne4 please keep us updated. I’d also like to grow ginger if it can be kept alive by mulching only.

I reason as follows: I’ve measured the ground temp here around the year and it doesn’t seem to go below about 45 deg at a depth of about 4-6 inches during the coldest months. I can’t remember if that is mulched or not - doesn’t matter - 45 deg is about the temp of the fridg where we store fresh ginger w/o ill consequence. And the roots are about 4-6 inches deep. I’ll monitor the ground temp more closely around the roots. Now our temp is around 70 deg.
My plan is to let it frost down then mulch it well and watch the ground temp. If it starts dipping below 45 deg I may add a less permeable cover to capture ground heat, maybe a piece of poly. Dunno yet.
I saw a video of a guy just harvesting a piece of ginger as needed from a pot. He just reached down into the soil, broke a piece off, if he got too much he replanted what he didn’t need - and that piece would grow a new plant. That is what I’m trying to do. Way less work than what I’m doing now - although ginger is not a lot of work to grow - kinda like garlic. (He was in CA.)
I also have some galangal which I will experiment with also. I think the lemongrass won’t be difficult either.
The unknown is the ground rodents. I have seen their holes in the bed when I raked away the straw yet no damage seen on any of the roots. Wondering if ginger’s pungency will preserve it. Anyone know? I guess I can always dig around and surround it with hardware cloth if need be - just dunno.