I currently have 3 honey berry bushes that unfortunately have been spaced 2 feet apart. They are boreal beauty, beast and blizzard so they all have upright growth patterns. Does anyone know if the spacing is so tight that they will interfere with each other too much to produce fruit? Alternatively can they be pruned to have a nearly vertical growth pattern or do they require more horizontal growth to produce fruit on?

Mine are in a crowded vegetable plot at about that spacing. They might be more productive with better care, but have no difficulty fruiting so far.

That’s great to hear! How many years have your honeyberrys been in the ground? Thank you.

I would dig out the center one and move it. The roots are shallow, so it isn’t that hard. It would be better to wait until fall at this point.

I second this. A 3’ spacing is fine if you are trying to make a hedge. a 4’ is just about adequate for separate bushes, and I mean bushes that will touch each other and won’t let you walk between them.

Remember you are planting them in accordance to what they will be not what they are now. The well established bushes on a local orchard look like these and even bigger: 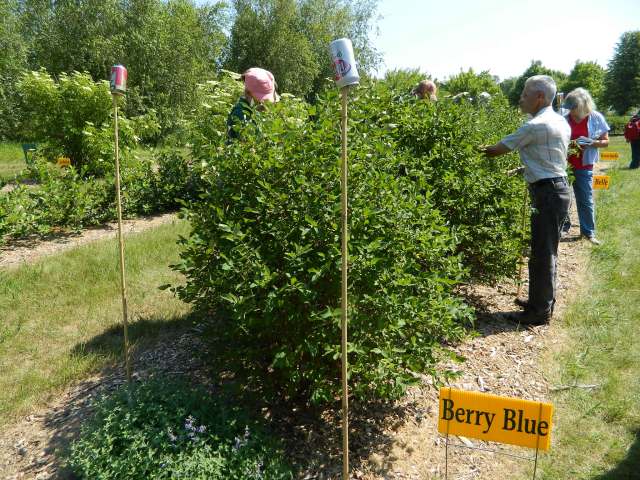 I’m in a similar situation. If they were planted a few weeks ago, would it be likely to damage them if re planted now?

I don’t know; how tight was the root ball and how careful are you

If it is a reasonably small bush it should not be that stressful to move it .