Honey Crisp - I do not get it

I always read that Honey Crisp is an apple that brings profit to professional growers. It is always more expensive in the stores. I tried it several times - picked from orchard, bought in the store. Eating one right now. It is sure crispy. But honey? No aroma at all. Taste is bland sweet to me, almost watery… Is it just my lack I am not getting good ones, or this is how “profitable” apple supposed to taste?

I haven’t had a good one either.

That’s my take on it, too

But people fall for fads

I’ve had pretty good ones from the grocery store on occasion but they pale in comparison to grocery store Pink Ladys, which tend to be really good. I haven’t bought a honey crisp in many years and almost exclusively buy pink lady from the store now.

Don’t care for HC- watery, sweet, flavorless, and expensive. We can buy Jazz, Jonagold, Opal, and right now even local Macs, typically less than $2/lb. But we’re still working our way through our Liberties and will be for several weeks yet.

Ok, so at least I know I am not alone on that one, thanks everybody!

I can find good ones in MD. Very crunchy and sweet, with a very pleasant flavor. They don’t blow me away, but my boys ask for them and are disappointed when I bring any other variety home. They don’t care about the name, they just like eating them. They also love the gold rush I grow, but those are only around for a few weeks out of the year.

When I eat something, I don’t really enjoy it if it’s just one-note. I love use of many spices, a sweet/sour interplay, whatever. To me, Honeycrisp just tastes blah. I don’t HATE Honeycrisp, but would never buy it for myself.

Some people find that overwhelming and unpleasant, however. I’d say those kind of people are the type that would thoroughly enjoy the uncomplicated mild sweetness of store-bought Honeycrisp. They have simpler palates and don’t want their foods multi-dimensional.

I’m glad there is an apple for folks like that. I just wish that there were more people like me who want absolute flavor bombs—maybe then we might have a chance of getting some good ones in the stores.

I used to get good Honey Crisps from the store. They also were good from the local U-pick orchard. Now I see huge Honey Crisp apples in the stores and I think that they overwater them too much to get the maximum profit out of them.

Every year except for this year, my HC has been very good. This year, it was bland, possible too much summer rain ( rained every 5-7 days for several weeks).

HC is not what I call aromatic apple but it has crunchiness and sweetness which is what general consumers are looking for. I like sweet apples so it is worth it for me. Last month I saw HC at a local supermarket sold for $3.99 a lbs. They were not organic kind, either. I am happy for those farmers that they can sell non-club apples at a high price.

I don’t think HC is a fad. Fuji is not a fad. People tend to like sweet fruit. Many people here, for the most part, have tried more apple varieties than general population. General consumers have about 10 apples to choose from, McIntosh, Fuji, Gala, Granny Smith, Empire, Red and Golden Delicious, Braeburn, Honey Crisp, etc. I would take HC over the rest, too.

The more apple varieties I have tried, the more I understand why one can become quite choosy about apples. This year, I have tried over 20 new apples (new to me). I have started to appreciate things like complexity of taste and subtlety of aroma that give uniqueness to certain apple varieties. I may soon turn into an apple snob

i will say one thing I dislike about Honeycrisp that I hardly ever see mentioned is just how obnoxiously crunchy it is. A little crunch is just fine, but if I wanted to eat a potato chip, I’d eat a potato chip. It sometimes hurts my teeth biting into a Honeycrisp. (And I have good teeth-all my original teeth, no dental work except filling 2 cavities, no gum disease, so it’s not like my teeth are bad and that’s the reason I don’t like the crunch.). It’s just TOO crispy, and I find it unpleasant.

I am with you on that one… It is hard for me to find apples I like in a store - Ginger Gold is one exclusion, but the season of it is short, and the quality in store is not the same as from U-pick. The rest of the apples that I can buy in a store I can eat (with exception of red delicious that I wouldn’t eat even if there are no apples at all and it is free

I like honey crisp " a lot"
It not fair to judge a supermarket apple for quality.
If picked at the right stage it’s one of my favorites .
Some years I get all small misshapen fruit.
Others ,they are large ,and extreamly flavorful…
And I like that crunchy texture.
Some people like chocolate ,others ,vanilla !
I like “good " chocolate , and, " good” vanilla !
It’s good their are so many different flavors of fruit we can grow.
I took a box of Honey crisp to NAFEX this August .
( they were starting to crack, seemed early )
And got a lot of complements ,delicious is what I remember people saying.
This was not your average crowd ,…this was at NAFEX !
All apples ( fruit) can have an off year ,or tast bad if picked at the wrong time.

In the Maryland foothills of the Appalachians, Honeycrisp grows exceptionally well.

A fresh local Honeycrisp in September is among the very best of apples-- at least that’s how I feel about them.

As they age… they lose their flavor… obtain refrigerator taint… and the texture degrades into a watery rubber feel.

Mid September here is when they’re at their peak.

Another rare but significant problem is their susceptibility to watercore. For me, a watercored Honeycrisp is a ruined Honeycrisp.

Occassionally you can get a good one in the grocery. This is the apple that got me eating apples again after the trauma of a childhood with only tasteless Red Delicious.

The “Premiere” strain of Honeycrisp is false advertising. They claim it is an early-ripening sport. Not true. Most years, both this and the original strain do not obtain their proper flavor until around mid Sept. Sometimes as early as early-Sept… but even when that happens… original Honeycrisp flavors up just as quickly as Premiere.

I’ve heard other folks in northern climates get really good ones. And @applenut claims he can grow excellent Honeycrisp on 111 rootstocks in southern California!

Maryland Honeycrisp in September (left) next to Jonathan apples (right) 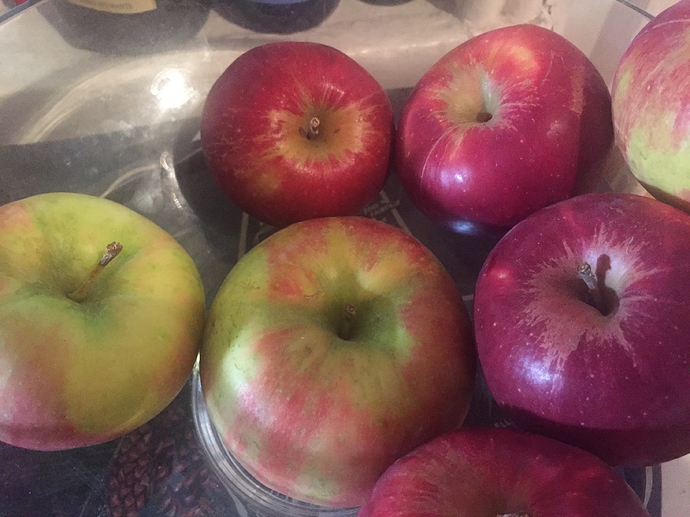 Premiere strain. Can be just as good, but do not ripen any earlier as claimed. 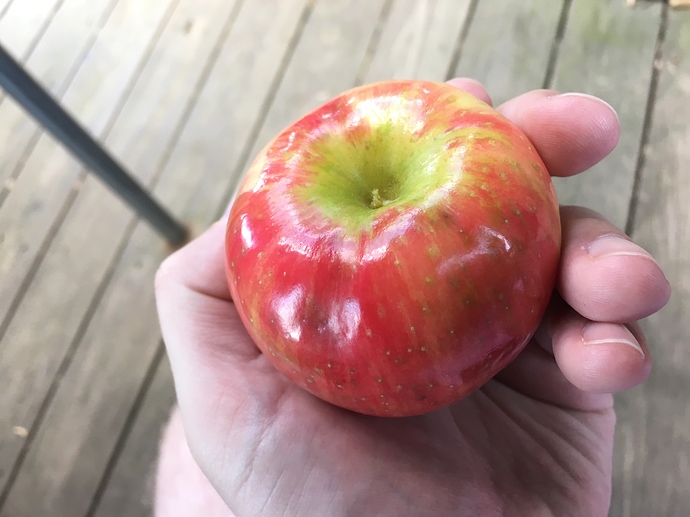 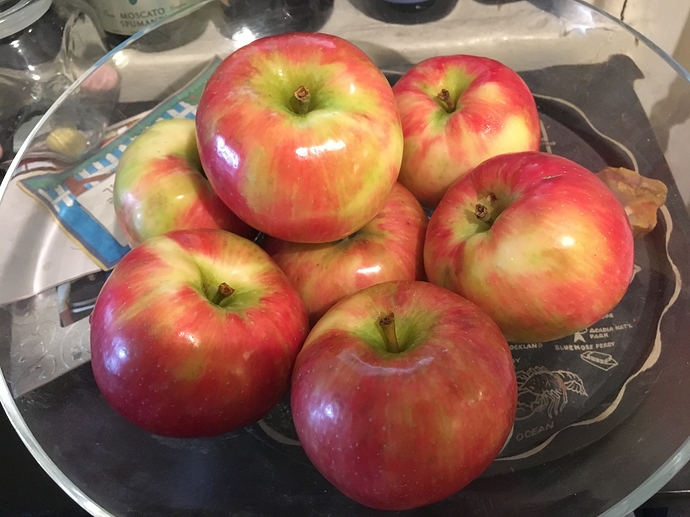 Another neat thing about Honeycrisp: the stem of Honeycrisp is stiff and brittle. It snaps off easily when you’re ready to eat it. I love that!

I dislike when an apple stem persists and resists removal, or partially breaks off when tugged on… leaving behind a frayed pointy spike. It gets in the way of the eating experience when it tickles my face! Just a minor pet peave of mine.

I also like Ginger Gold, and agree that it is surprising it keeps at all considering how early-season it is. I just bought some from the grocery that are still good!

I think it is silly when the grocery store labels them as having a “spicy” flavor. That is B.S. and just goes to show how little grocery store managers know about the foods they’re selling. Ginger Gold apple is not in the least bit spicy. The word “Ginger” in the name is an homage to the founder’s wife. The farmer’s wife’s first name was “Ginger!” He named the apple after her.

Funny, but I found them spicy - not ginger spicy, but complex taste kind of associates with “spicy” to me.

I’ve never tasted a spicy Ginger Gold, and have eaten lots of them… but I believe you.

Here’s the story on the name. 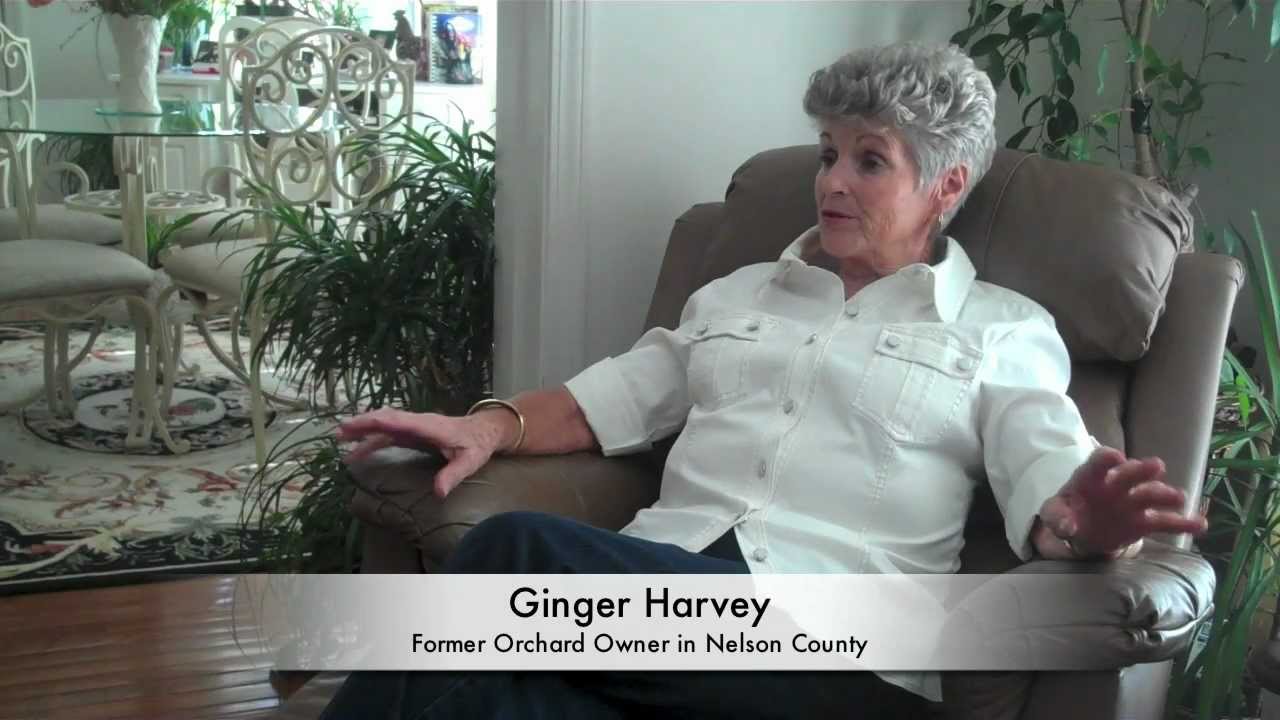 When we went to Reed Valley the last couple years we tried many different apple varieties, maybe a couple dozen at least. My wife and I thought of all of the ones we tried, we liked HC the best- the balance of crispness, acid, and sweetness was a winner for us. I will say the flavor is not subtle, it was in your face, so I could see how some folks don’t like that.

But, we do seem to like an apple with a tartness to it, more than sweet, but it also needs to be balanced. Based on those criteria it’s probably not a surprise that our other favorites are Goldrush and Golden Russet.

We haven’t had any store bought HC in a while, so I can’t say how those compare to the ones we picked.

They did charge us a bit more at the orchard, but it wasn’t too much. We did end up buying a bunch of “seconds” very cheap at about $1/lb.

The owner told me of all the problems he’s had with growing them, it’s hard for them to get pristine looking HC compared to other varieties. I’ve talked about this in other threads so I won’t go into it here. But, I could maybe see why they cost more based on his experience.

I like a flavorful HC apple. On a warm fall day, which we seem to have more and more of, the crisp texture, bountiful juiciness, and sweet flavor cannot be beat. While I like a lot of variety, complexity, and spiciness in my foods, that isn’t something that I’m necessarily looking for in fruit. In the evening, a good HC apple can appease my sweet tooth and help me stay away from that bin of ice cream sitting in the freezer whispering to me.

All that said, I avoid the larger HC apples like the plague. I agree with many of the other posters, these are overwatered and very bland. Not worth the $$. I’ve actually started to avoid certain grocery stores because those are the ones that they generally carry, not the smaller sweeter ones.

When I get a really good HC apple it is certainly my one of my favorites. But there are a lot of bad ones out there. I credit my first taste of a delicious HC from Sorgels Orchard about 5 years ago as what made me decide to plant my own orchard. I have around 25 trees and one of them is Honeycrisp. All of my apples have been slow to bare so I’ve not had one off of my own tree yet. Since that time I’ve really come to appreciate many other apples that I enjoy more than HC. But if I can grow HC as good as the best ones I’ve eaten its certainly a keeper. Ginger Gold on the other hand is one of my least favorite apples I’ve tried. I didn’t find anything appealing about it.