Just this spring I’ve noticed a new weed in many of my fruit rows. Initially I was struck by the similarity of the leaf to honeyberry. Now, I’ve
seen some with flowers (see pic below) and am wondering if these could be honeyberry seedlings?

I’ve had honeyberries for the last few years (first bushes in 2012). The yields have started to increase a bit, but I suspect that the birds get more than I do, so they could be seeding them. The flowers looks like normal honeysuckle to me, but I thought that they were usually vines (and are related to honeyberries anyways). Maybe these are some sort of hybrid?

The honeyberries are done flowering now, but it wasn’t all that long ago. Anyone have any opinions on what these are? I’ve left most of them so far and am leaning towards keeping them at least long enough to see if there is fruit-set and what it looks like. 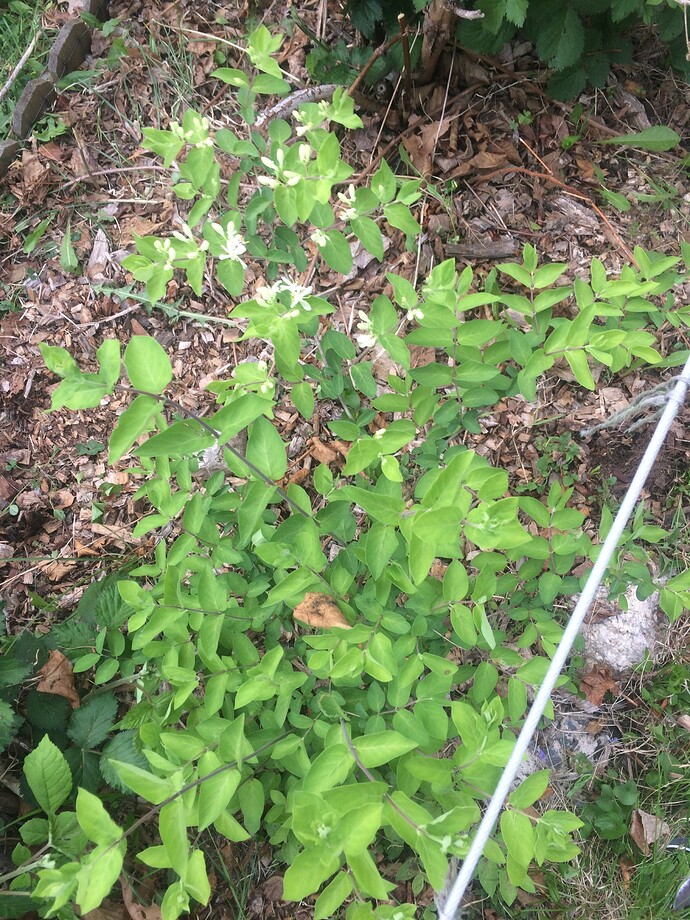 Those don’t look like the blossoms on my honeyberries. The honeyberry blossoms are more bell-shaped. Also, my honeyberries are done blossoming, but the wild ones are just opening. The wild ones are bushes around here. They can be a nuisance, but the birds enjoy them. As a kid, I was always told that honeysuckle berries were poisonous and not to eat them, but I am guessing that was not true.

Not sure what variety others have , but they sure look like the Honeyberries I have. (Cinderella, and Borealis) from Stark Bros

Birds spread a lot of different species of honeysuckle bushes. That may be the Amur honeysuckle.

Not sure what variety others have , but they sure look like the Honeyberries I have. (Cinderella, and Borealis)

I’ve got quite a variety (see below), so I figured it could be some sort of hybrid.

One of these years I need to protect enough from the birds that I can give them a decent sample and report.

That may be the Amur honeysuckle.

I think you may be right- One article mentioned that they flower later than other honeysuckle, which would be just about right. I can confirm it by waiting to see if the berries are red, sphere-shaped, and ripen in September.

There are honeysuckle that grow into large shrubs.

All the descriptions of Amur honeysuckle have them growing 15+ feet (taller than my trees), which would certainly qualify as “large” in my book. It would be bigger than my fruit trees. I’ll probably just keep a couple out of curiosity to confirm the species.

As a kid, I was always told that honeysuckle berries were poisonous and not to eat them, but I am guessing that was not true.

I did a quick search and it looks like many honeysuckle actually are poisonous. This article says “In extreme cases, respiratory suppression, coma and death have been reported. As a result, human ingestion of honeysuckle berries is not advised.”

My honeyberry’s flowers all face down

Could it be an Autumn Olive bush? Those flowers look very familiar, and ours are blooming right now. Check to see if the undersides of the leaves are silver. I’m not familiar with the other kinds of honeysuckle, and I haven’t been able to get my honeyberries yet, but autumn olives are invasive and very common here. They make small red berries that are tasty on a large bush in a good year.

It does not look like the Autumn Olive I have ( the one has red berry). Autumn Olive’s leaf is a little silver hue, leaf is narrower, flowers not this big.

In case anyone is interested, I checked back on one of the plants I left and can say with certainty that it is not a honeyberry based on the fruit. It is round and has stripes. Could be Amur or some other wild honeysuckle. With a clear conscience, I ripped it out and put down woodchips in the blackberry row it was occupying. 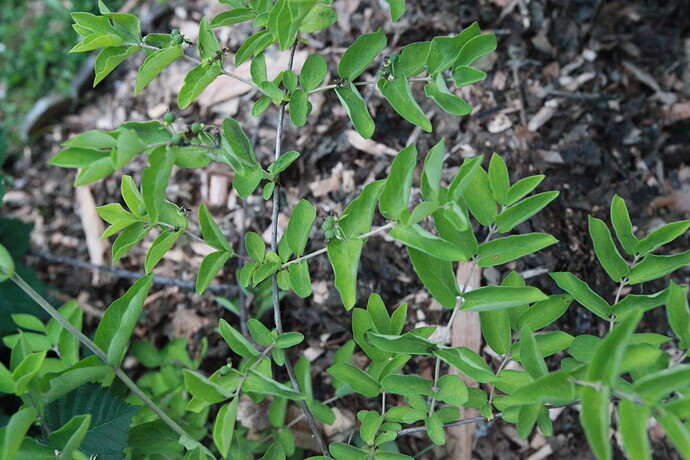