Honeyberry Is in full bloom. 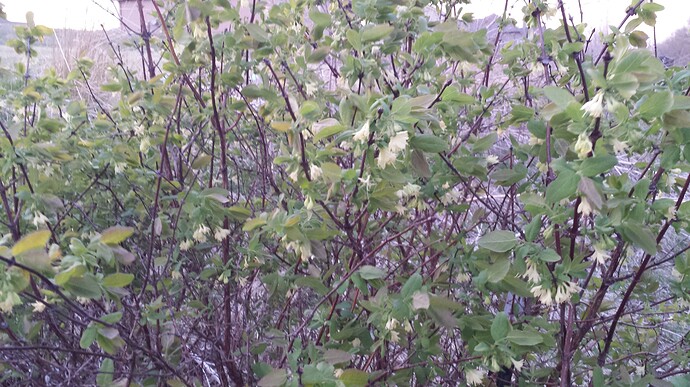 Even though I’m 1.5 zones warmer, mine aren’t even close to that far along. The buds have just started to open- no flowers yet.

The Zone things is crazy this year. Some of mine new Asian pear grafts starting to show green tips.

I with ya Hoosier, I’m envious of Tony as well!!!

I’ll be getting 3 varieties from HBUSA in a week or so; Aurora, Borealis, and Indigo Gem.

Bernis said Aurora is a larger berry and nicely flavored, and that Borealis has a great flavor too, but “…Indigo Gem is slightly more flavorful to 8 out of 10 people we test it with”.

So I’m looking forward to my own taste test in a couple years, though I may have to net. I guess birds love them too…

Jerry, keep us all posted as to how they do for you, and how they taste. It’s just not chilly enough here to grow them I fear. I’d love to give it a try, though.

Yeah Patty I get fruit envy my own self when I think of the things I could grow if I had Cali, Tex, or Fl weather instead of this stuff in fly-over country… But it does keep it interesting.

Some of my haskaps are already forming fruits, others still in bloom. I have selections from Maxine Thompson chosen from seedlings from Japanese stock.

These guys are easy to propagate. All you need is to buy two different varieties for cross pollination. I usually add about 6 inches of scott top soil on the base of the bush in the Spring and the following Spring I then use a garden hose to blast off the 6 inches of soil and cut all the canes that have roots and you can have a patch in a couple of years.

The two Honeyberries I have are also the Haskap(Japanese type)from Dr.Thompson.She said these are better suited for the Pacific Northwest.At first I didn’t like them,but as time goes on,I can kind of see why they get their name.
I almost think they are like Blueberries,producing fruit without another plant needed,but fruiting better with another.One of my plants is about five feet and produces a fair amount of flowers and fruit.The other is close to three feet and had some setback problems and is not as fruitful.Plus,they flower very early and not many bees are out then.
Like Tony wrote,they are easy to propagate.So,if anyone wants to try some,I usually grow them from Summer and Winter cuttings. Brady 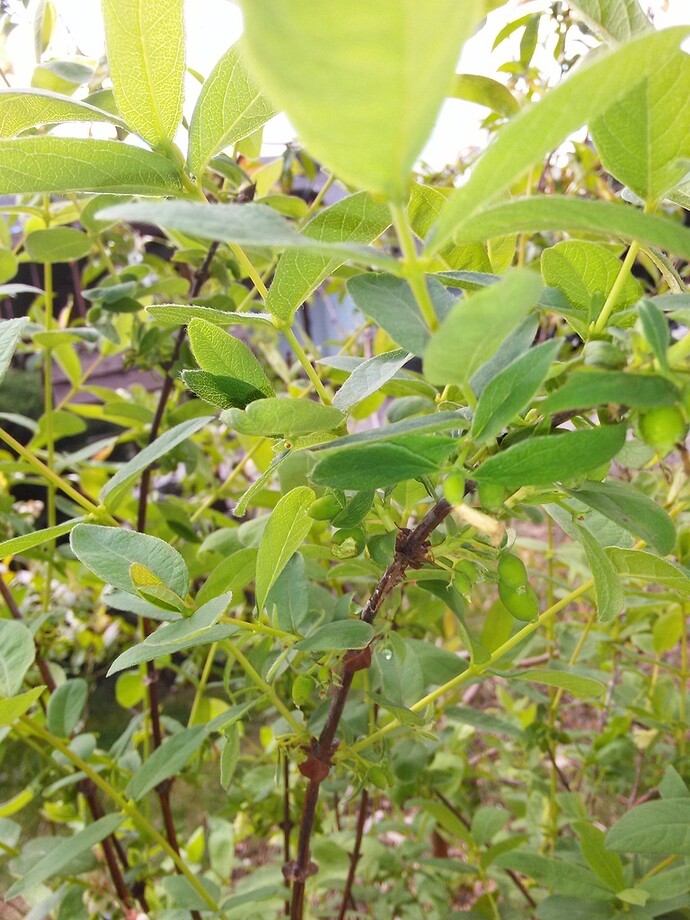 I live here in the PNW like Brady and Murky and they are very easy to grow and eat every May and June, mostly in shade.
John S
PDX OR

I have been growing honeyberries since 2008. I have Berry Blue, Blue Belle, Borealis, and Tundra. So far all I have had is a handful or so max of berries per year, but this year all the bushes had blossoms. The weather was sunny and low 70s. I saw some insects buzzing around them. Then the weather turned cold and rainy, but I am hoping they got pollinated sufficiently to finally have a crop. I also have two Auroras and an Indigo Gem due to arrive from Honeyberry USA shortly. Mine are on a sandy hillside, possibly just fill from a railroad cut, but I plan to start a new patch in a low, damp pasture area where they might do better. I have tried laying a long branch on the ground and putting a stone and a little dirt on it to try propagate more, with only partial success. I will have to try piling some topsoil on a bush like Tony suggests. One question: Can one just divide a large bush, take half and leave the rest? Will any piece with some root on it suffice? Is it too late after it has leafed out and I should wait 'til next spring to do so? As far as flavor, I found the Blue Belle and Berry Blue rather bitter, but the Canadian ones were tastier, sort of a grapefruit flavor.

As I recall, I have just divided them, and it worked fine. I haven’t noticed much of a difference in flavor. They’re all pretty good if you like tart berries. None are amazing, like for me, paw paw, pie cherry, heirloom apple, selected variety American persimmon, peach, concord style grape. I would propagate it when you still have a lot of moist season left. For us, we don’t have enough left.
JohnS
PDX OR

John, they get a lot sweeter 2 or 3 weeks after they turn blue.

They look a bit pale bradybb.

Low nitrogen? But it looks like it affects newer growth so trick of the light?

I got to sample a honeyberry yesterday . Only one to stay on the new plants . Birds sampled it first . I think these are a winner . Very tasty .

Any possibility anyone knows if honeyberry can be grafted to honeysuckle? Honeysuckle bushes sure would make a nice rootstock.

I was thinking of trying it . Sure would push a lot of growth in a hurry .

That’s what I was thinking Jerry. It would make a little scion wood go a long way.

I am thinking of trying green on green as the wood firms up .