I have a large cattle pen I use as the frame for a hoophouse. Up until now I’ve used it to overwinter potted figs, olives, and other plants that are higher zones but go dormant in pots.

it’s a pain to get in and out of it, I don’t have a real doorway or anything in winter. we get very high winds so it’s firmly closed and weighed down from November until April usually.

I usually cover it with greenhouse plastic sheets in October and start bringing things in, right before frost. in November I put a layer of bubble wrap inside and a second translucent tarp to insulate it from freezing. I use a few heat mats and in coldest times a tiny space heater to keep it at around 40F.
in summer I uncover it and clean it out and don’t even use it.

it’s all built of salvaged material, I have so far gotten it all for free but I am willing and able to buy some things this year if I can get up the nerve/get good ideas.

this year, maybe in the fall, I want to put the figs in ground inside it. I plan to use the whole thing for my figs and mmmmaybe the olives (if I feel I can trust them down to 40°). I have a few other plants that would do well in pots in there.

my worries:
-is it enough protection for the figs in winter
-what do I do with the thing in summer?
-what kind of alternative or more permanent covering could I use? I was thinking of building off it with some 2x4s and maybe using that plastic glass stuff I’ve seen on greenhouses- will the wind bust it up if I do that? it would let me put hinges on to open it up easier in summer if so
-how on earth do I build a door into it so I’m more willing, less lazy about checking in and watering as necessary? I have to carry water in buckets from the house to do that and digging through snow and unweighing the tarps and climbing in makes me lazy 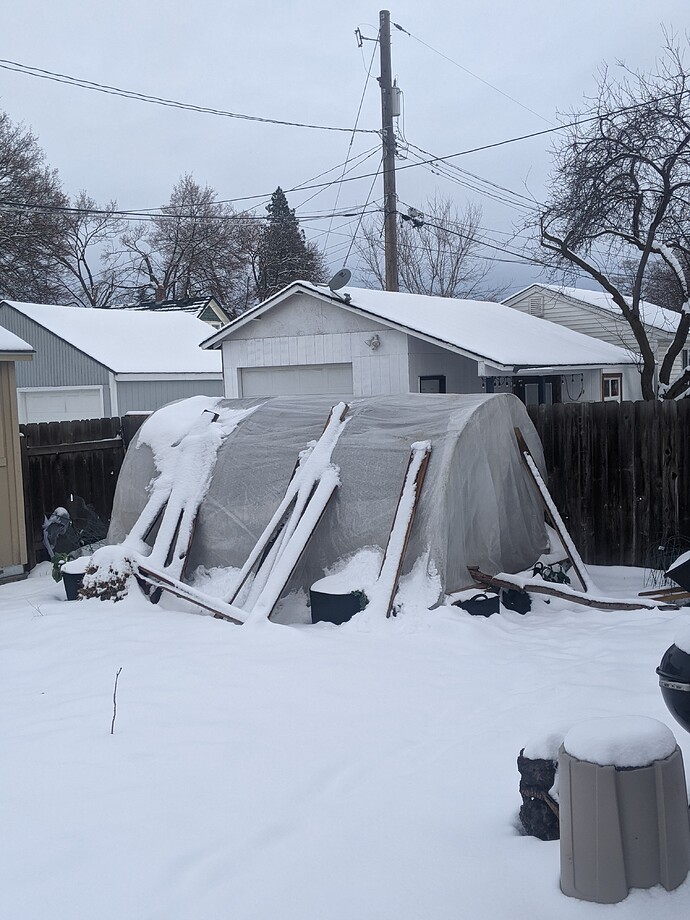 has anyone done this? I’m in zone 6b. I’d love to see other people’s hoophouse or stuff that’s salvaged material used for this!

You can buy pipe benders to make larger hoophouses, Johnny’s sells them.

You could frame a wood end wall for it and put a door in that. Olives are good well into the 20s F here. D

On Youtube there are absolutely over the top cattle panel green houses and there are also el cheapo very basic ones.

Here is probably one of my favorite… 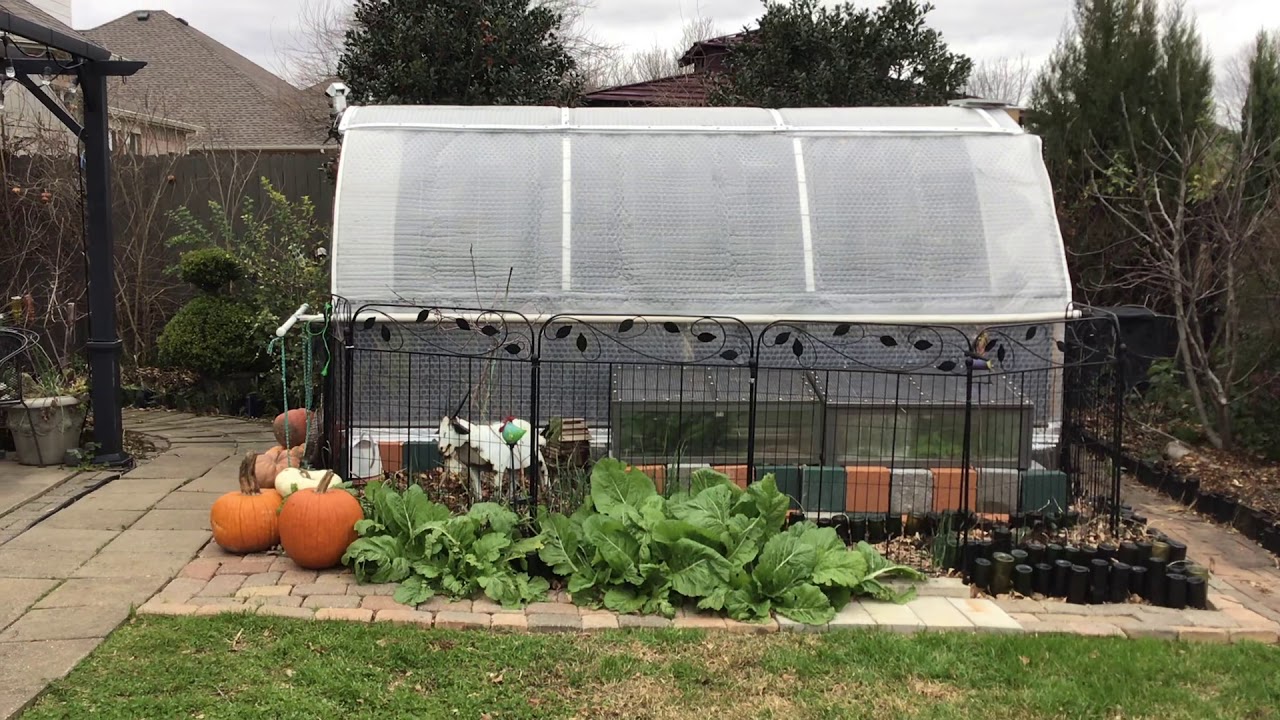 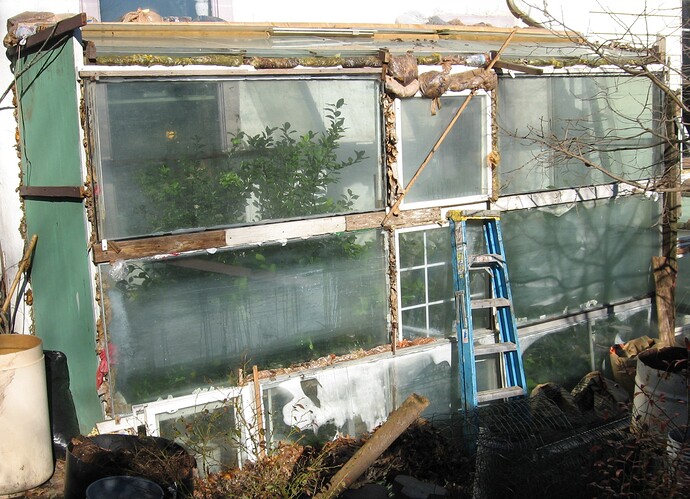 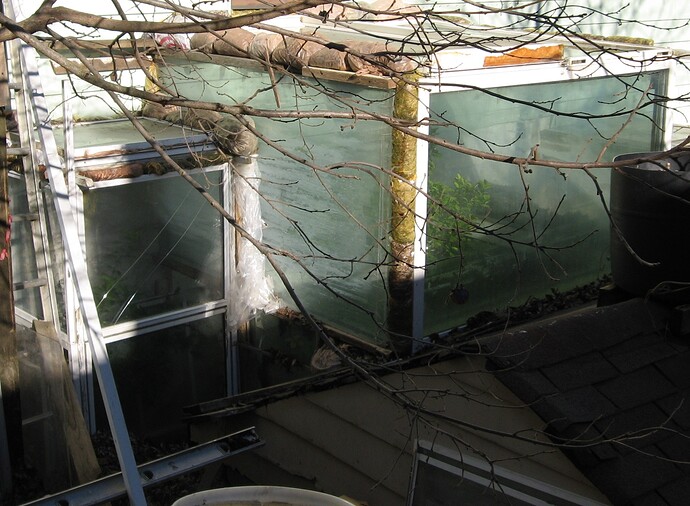 As many variations as members!

Flexible Solexx with C clamps to attach to lengths of pipe. Stays put in high winds. Bottom of frame bolted to boards. 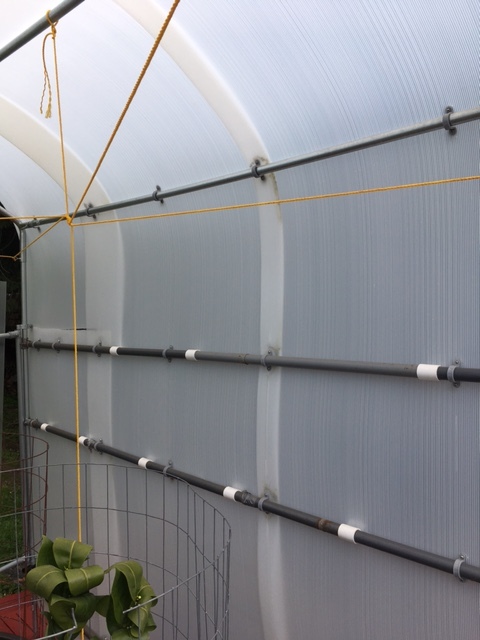 that solex- is it pretty shatter resistant? I love the way glass like other posts looks but I know branches in wind will get thrown into it part of the year

I don’t think I have the ability to do a wooden wall- maybe I’ll try to do a door frame? it’s going to be difficult as is just trying to frame it out and cover it better

rolling them up in summer or being able to open all the sides would be good I think, I could keep the figs from burning that way.

I’ve been keeping the olives and figs in there in the high 30s each winter in pots but I want them in ground. I only intend to use it for those, unless I get rich enough to build a greenhouse that can be warm enough for tropicals.

it’s about 8’ tall and 14’ long which is a decent size for me. I think I’ll be keeping the plants pruned down to fit

I, too, much prefer the look of glass but don’t have the woodworking skill!
Recycled pipe, a pipe cutter, and metal fittings have become my workaround for framing. Solexx is corrugated plastic. It’s flexible and can be cut with shears. When it’s attached to pipe with C clamps, the structure becomes quite rigid. The corner connectors for 3/4" and 1" pipe can be bought online. If you happen upon 1 3/8" recycled pipe, you can use the larger T connectors sold at the big box stores intended for chain link fences.
To attach the door, I use chain link fence ‘hinge’ hardware from box store. Instead of Solexx, I use rigid corrugated ghouse sheets sold at my local ghouse store. These are also attached to pipe with C clamps.
After years of PVC structures that were always ready to fly off, this pipe method stays put!

I might do a wooden frame, with hinges so I can lift and prop out the sides of the structure in warm weather- the solex-or corrugated plastic, I could probably screw on and use as the window in the frames I bet. it doesn’t even need to be flexible for that!