I’ll recommend growing a row of Bulgarian Carrot hot peppers for them.
http://www.tomatogrowers.com/BULGARIAN-CARROT/productinfo/9022/

I read through the whole thread and saw Richard answer a question about Peruvian Ahi a while back. I used to live next to an old Peruvian lady who would smuggle Rocoto Peppers back from Peru when she’d fly down to visit family. She made food for us all the time and there was always a bottle of her homemade Ahi (the sauce, not the pepper) on the counter made from these Rocoto peppers. It had a good amount of heat to it, the pepper is 50k-250K scoville, but the taste is unbelievable. Vaguely reminds me of kind of a Chipotle smoke but it’s very unique at the same time. I’ve thought about that Ahi for years and finally just got the seeds for a Peruvian Red Rocoto this year. If it all works as planned, I’ll have to share some pictures and I’ll post the recipe if I can talk my friend into letting me.

where did you get the seeds from?

Derek, that would be great, would like that recipe, got a bunch of pepper seeds from the pod piper and they are going to be in pots soon. I had to share with a friend that works at Lowe,s who got me started with ahi peppers,who used to live in Peru for mission work.

Steve, my wife actually found them, some guy with the username texastree956 was selling them on Etsy. Fingers crossed that seeds from Etsy aren’t a scam haha.

That’s awesome Bob, I don’t know if I have ever tried the actual Ahi Pepper. She made a sauce that she called Ahi and said that people usually make it with the Ahi pepper which makes the sauce green. She substitutes that Rocoto pepper in making the sauce a deep red color. Even though it’s been ten years since I’ve had it, my mouth is starting to water just typing this. The taste was perfect and I haven’t been able to find something similar since. Apparently there are orange and yellow Rocoto which are even more hot than the red but I’m going to start with what I know.

@DerekS , send me a pm with your address and ill give you some pubescens seeds.

When the Podpiper send you some, you better hang on, yes he send me some like the beginnings of a few hundred plants. Thanks again,
Podpiper!!

Heres my pepper starts this year. I have them growing under LEDs. Taken away from the LEDs the leaves are more of a true green. Six Thai plants, Six Tabasco plants, one Korean pepper plant, two or three plants each of two types of Jalapeno, two types of Cayenne, and Im probably missing something. Most but not all of the seeds were from Baker Creek.

Last year I grew my peppers in a raised bed and something tunnelled under all of them and ate the roots and they did very poorly. I was disappointed. I guess this year they will all be in containers even though that’s a lot of watering. 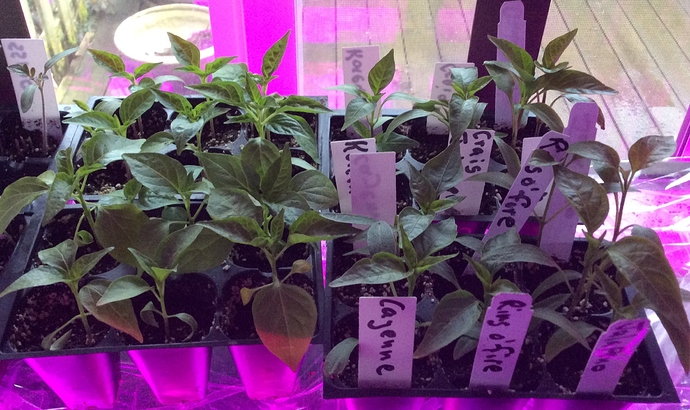 i have purple jalepeno, numex sunrise, numex suave orange, and cayenne ring of fire started yesterday in my grow room. going to dry and powder some and make sauce with some. how big do your pepper plants get in a 30day period under you lights? do you use heat mats? my 1st time growing hots.

@Moose71 These are roughly 30 days old. I have them timed at 10 hours of light because Im also starting long day onions under the same lights. I germinated the seeds on heating mats - helped a lot -but the plants are no longer on heating mats. My ring of fire germinated poorly and I had to try a second time.

shout out to @thepodpiper! with your seeds, i am on the path to podness.
in the background: bulgarian carrot (the largest of the bunch) and bishop’s crown.
in the foreground: two jaloro seedlings. 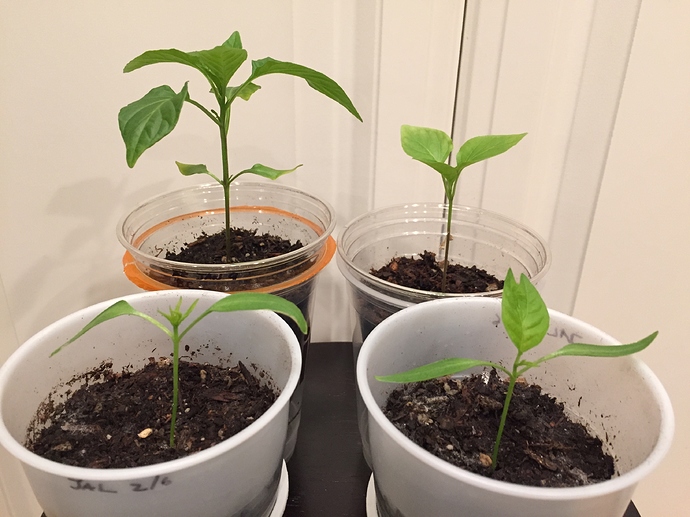 This is the truth @thepodpiper does not play around. So well organized, and so many varieties. He is the man. Thanks again podpiper!

17 out of the 20 peppers i planted took. already been looking into new pepper recipes. my wife hates peppers esp. the hot ones but luckily i have a few friends that like them like i do. what m not using ill easily sell at the farmers market.

I’m always down for trading seeds. I’ll slap together a list of the little I have and post it here.

I am not sure what variety this one was. I went to L.A and saw a pepper plant with immature purple fruits and some red ripened ones. The leaves were velvety as smooth as silk. The lady said it got good heat so I asked to buy some ripened ones but she gave me a few and it was one cool looking pepper in my collection. 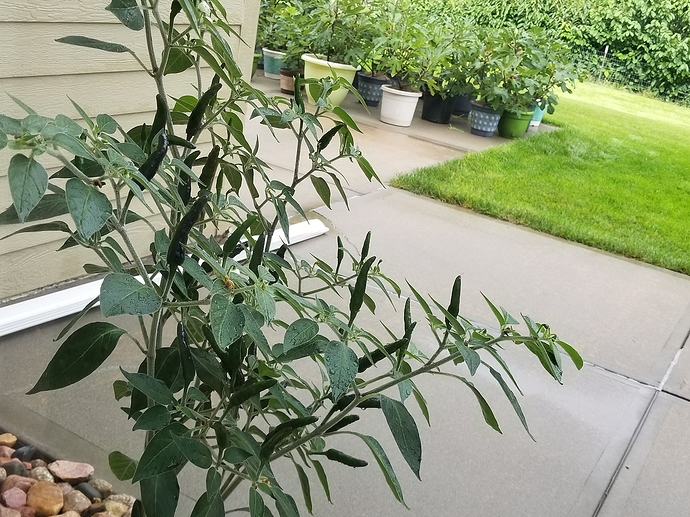 I’ve grown all kinds of crazy hot peppers, but the last few years I’ve found that all I need for myself is one habanero and one or two serranos, and a fish pepper. Most of mine end up going to waste- and I have enough smoked, dried pepper flakes to last me several years in my freezer already.