How am I killing my kishu mandarin?

I might be the only person in Southern California that struggles with Citrus. I’ve been reading online and thoroughly confused myself, the pictures of overwatering and deficicies look really similar. We have clay soil but so does everyone else in our neighborhood and their trees look great. The leaves turn yellow, I think from the veins first, then fall off. Branches then turn yellow, then brown and crispy :(. I scratched some soil away and the roots don’t look obviously bad (to me). Any thoughts? 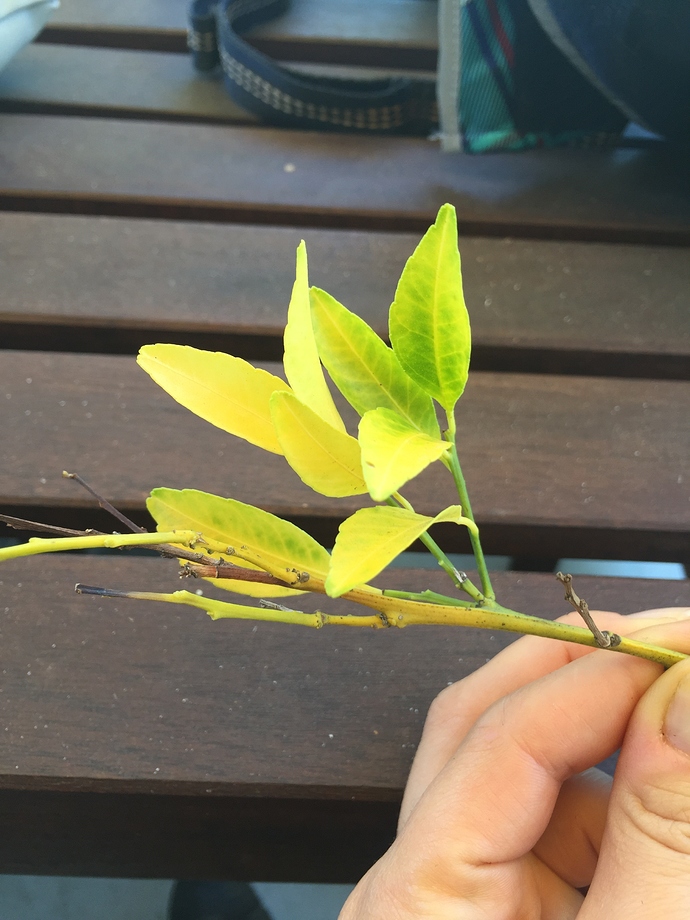 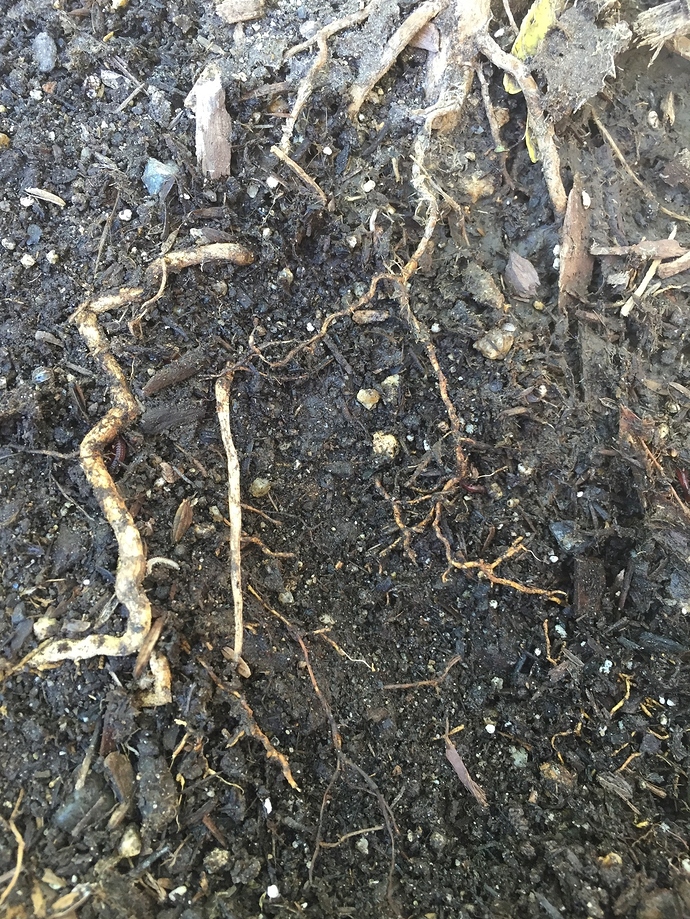 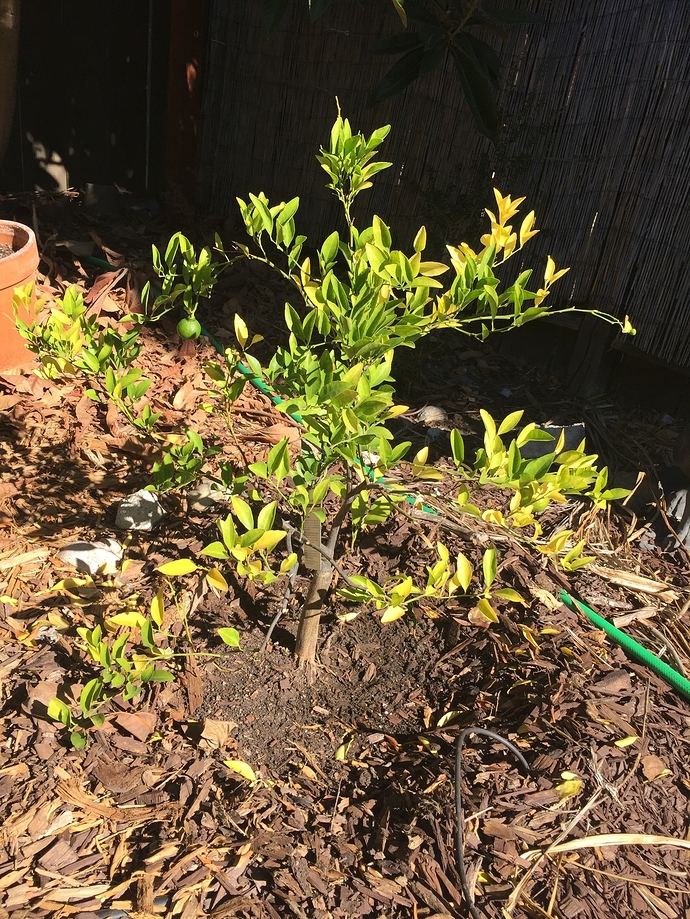 That could just be a nutrient deficiency. What are you applying in the way of fertilizer?

There are some good citrus fertilizers but I’ve never had need for them. Just adding nitrogen has worked on my soil.

It looks to me to be lacking in nitrogen. With all the organic matter around the tree you may have all the nitrogen tied up from the bacteria trying to decompose the organic matter. I would apply a high nitrogen fertilizer and see if that helps, but only if you are going to have a mild winter.

Thank you for the suggestions. I fertilized with citrus fertilizer in spring and summer and intermittently have used water with fish waste so I would think the nitrogen would be okay but can certainly try to increase it. A Meyer lemon tree showed similar signs last year and completely recovered when I took it out of the ground and potted it so I was thinking it might be my trouble figuring out ideal watering. Maybe a combination of both?

So the fact that it did better inside is a clue, but it probably doesn’t tell us as much as we think it does.

One thing I thought of: these sorts of yellowing leaves on other crops can be caused by other nutrient deficiencies, like iron, zinc, etc.

This is just a quick website I found, and I’m sure there are better ones, but they do talk about and describe the deficiencies for things other than nitrogen. http://i.stuff.co.nz/life-style/home-property/66443866/5-common-citrus-tree-problems

Perhaps that will help.

I wish you the best of luck with your mandarin.

I hate to sound like a county agent, but the best way of knowing your problem would be getting a soil test from the area the trees were planted. It would cost about $10 to $15 for the test plus shipping. It could be nitrogen or some micro nutrient causing the problem. Or just put on extra nitrogen and see if that helps. Citrus tend to require more nitrogen than other trees.

I will look into having the soil tested, that’s a great idea. Just to clarify, when I potted the lemon it stayed outdoors, essentially in the same place in the yard. Thank you all for the suggestions!

Your local county extension service should have bags and information on getting the soil tested by a state university. A standard soil test should be all you would need. No need to get a private soil test since they will be more expensive and may not give you what you need.

I would definitely say lacking nitrogen. You should be applying a good quality citrus fertilizer (which should be higher in N than P & K) 4 times a year. I would try giving it a really good fertilizing. It’s sort of late to see any real improvement, so hang in there until February/March, and you should see some improvement in the way of new flush. Fertilize again in February and hopefully your little Kishu will perk up for you. If not, and if you continue to see an overall decline, I would also consider treating for phytophthora. Phytophthora infection can mimic the appearance of severe N deficiency, with the tree just turning an overall yellow, and declining. Apply Agrifos, 2 tablespoons in 5 gals of water. Apply to the roots. Repeat in 6 weeks, and then every 3 to 6 months. We here in San Diego county have some serious issues with this organism, with our citrus (and avocados), and it is more challenging in certain pocket areas. If you over-water, or if this area really has poor drainage, this could be your culprit. I would recommend that you plant your citrus on mounds, if you are dealing with clay soil, to promote drainage. I have pockets of this in my yard. I can have one citrus tree that looks awful next to another one, maybe 20’ away, that is lush and green. Our commercial avocado growers here apply Agrifos continually, as a preventative.

A fairly quick (and reversible) way to check the N deficiency theory is to use some foliar fertilizer. Could be as simple as some Miracle-Gro diluted in water and sprayed on the foliage (fish emulsion can be diluted for a spray too). That would be far easier than trying to mix up your own hi N stuff which had the right pH etc to be absorbed, but you could do that too. A couple of weeks of foliar N application should show some results, if it is a lack of N that is causing your problem. If it does improve things then you can continue the foliar as well as moving on adding something to the soil. If it does not improve with foliars, then you have not messed up the soil any and can look for other causes.

You did great by picking the Kishu as a valuable citrus to grow. Just eyeballing the photos for info, it seems that there may be some woody stuff mixed in with the soil mix, which is a big no-no. The above comment is spot on, and I would get on my hands/knees one day and try to fish out any underground wood chunks from the root area soil by using a metal kitchen fork to loosen the soil and pull them out w/o busting the fine roots at all. I (for me , anyway) would use a bag of the Black Kow cow manure sold at Lowe’s to build up the root area soil to where it was a couple inches above the top roots. After it was watered in well, then I would put woody mulch on top. Because there may still be some wood chunks below that will continue to rob otherwise available nitrogen, you could put the tree on a consistent/regular fertilizer schedule and keep the soil always moist. Decaying wood on top is good, and decaying wood inside the soil is bad. When you get new leaves growing, they should be pretty green.

I grow fig plants in a mix that is 80-90% bark fines. Bark is basically a type of wood. If you put on enough nitrogen for both tree and bacteria it doesn’t matter. The figs grow like weeds. In pots it takes Miracle Grow once a week.

The surface roots only tell part of the story. If drainage is poor below and roots near the surface regularly dry out too much it could cause similar symptoms as nutrient deficiency (actually, oxygen is a nutrient). When you planted the tree did you just slip the pot in a small hole with compacted soil all around it? You may already be considering all this but you didn’t mention any further investigation beyond scraping enough soil to study surface roots.

Poor drainage is a much more common factor than nutrient deficiency. In the west, excessive salt in soil is also often a problem which mimics other forms of nutrient deficiency- sodic soils don’t just mimic but also create deficiencies. Drought and greater reliance on CA municipal water could exacerbate the issue.

Alan, it’s not just the salt in our soils, but our pH, which can be just high enough to block out absorption of certain micronutrients, especially in poorly draining soils. Most folks with heavy clay soils here in areas of our county will plant citrus on mounds, as I mentioned, to improve drainage. And, the other double whammy we deal with is Phytophthora, which proliferates in constantly wet soils, especially as our temps drop to that ideal range 60-72 or so. It can be a real problem for some of us. It may be worthwhile for Lids to dig the tree out, create a nice mound, with amended soil (about the only time you’ll hear me say amend the mound/hole), and replant. It wouldn’t hurt to also treat that area with Agrifos as well, just in case.

Fruitnut- Growing citrus in pots with 100% shredded/powderized/teenie weenie bark/peatmoss/rice hulls/etc. works with continuous moisture and nutrients being provided. Obviously. Digging a hole in clay and planting citrus in it with chunky wood mixed in is the different animal being examined in the above photos. Unchunking the in-ground soil is what I would do to “reboot” the root system’s surroundings to give it a better chance to eat good food consistently and thus grow up to be a big boy sooner. Rather than getting underfed for a couple years and hoping to survive w/o doing any growing, while waiting for the fungi and bacteria to slowly decompose the chunky stuff.

When I planted the tree (sometime around 2/2014), I dug out a hole about twice as large as the root ball. I may have added some aged compost/planting soil in (at the time I didn’t know not to amend). There aren’t any large pieces of mulch in the soil, just a few that haven’t stayed raked out. I made a small mound (obviously not high enough as it has sunk to ground level).
I sprayed the foliage with diluted fish fertilizer today (about 20 crazed bees or yellow jackets, I didn’t get close enough to look, descended within about three minutes. Yikes!).
Do you think it would be better to dig it up now and remound before “winter” or treat for phytopthora first?

I’ve had only bad experiences with digging and replanting struggling citrus trees. The one time it worked for me was when the tree was doing great. Good luck!

it’s not just the salt in our soils, but our pH, which can be just high enough to block out absorption of certain micronutrients, especially in poorly draining soils.

I was thinking that but somehow forgot to write it. Of course I’m aware of sodic soils being high pH soils and the manner this affects plant nutrition.

I should also have said that a soil test is probably a good idea here, instead of jumping to conclusions, but if this is the only plant suffering it has to be specific to the hole (or possibly, to the species).

I agree with planting on raised mounds, and it is a solution I’ve used for I don’t know how many decades now, but at least 30 years, when ever drainage is an issue. Usually I include the native soil with the new mix with greater concentration of it towards the base- but in sodic soil I might just have a mound of distinct soil. Never had to deal with it, even when I lived in CA. All the soil I worked there that I remember was well drained sandstone and the sand it returns to (often by way of a pik).