How are your in ground figs handle this past Winter?

I went out and pulled all the wood chips away from the base of my two fig bushes and all the branches still looked green. I pruned them to 12 inches before covered them with wood chips. Hopefully, I will have good fig crops this year. The low temperature was -5F this past Winter.

I don’t think mine really count for your survey, but they are doing well. We only went down to the low 20’s on two nights this winter. Even the skinny younger ones were fine with nothing more than some pine straw piled around their bases for the winter.

Maybe it will be a good fig year for everyone.

Any growth that wasn’t hardened off is dead, but main trunks seem good. But we’ll see better in a month or two. Low of 7f.

Are you recoverng or calling it good for the winter?

My figs are all in the open. I see a lot of dead tips, and lots of dried up wood. The upper parts of most smaller canes are not good. The lower parts and the fatter canes still look OK though, so hopefully I will do better than the last two years which died to the ground. If they die to the ground again I am going to wilf-pruf them in future years.

Most of my in-ground figs look rough. But I do have one Battaglia Green that looks pretty good-- fairly green wood and what appears to be a new swelling bud. It’s in my z7a fenced backyard in the city. Low here was around 8 F.

If they die to the ground again I am going to wilf-pruf them in future years.

Yes, I wish you would because my results are inconclusive. I can’t say 100% it was this product (although i used wilt stop, either is good, same product really).
My blackberries look good so far, but it’s hard to tell till they start growing. many times they show symptoms very late.
This year I’m putting a Marionberry in the ground. if I can keep this one alive I will be replacing most of my blackberries for this, and wyeberry,boysenberry, and tayberry. these are the ones I really like. Also I may keep newberry. i will get a taste this year.

I’m glad you created this thread, because I’ve been wondering if everyone was a lucky as me…obviously not.
We hardly had a winter this year in middle TN/south central KY. I think we got to 10 degrees once and even that was just one night. Other than than we barely got below 20 all winter. Just so everyone knows, this is NOT typical for this area. We almost always get below 0 once or twice a year, get in the single digits 3-6 times, And usually have at least one stretch where it stays in the low teens for a few days straight. I am aware that this doesn’t exactly match with the USDA zone definitions for my 7a/6b area, but its how it is. I have lost my figs to the ground 3 of the last 5 winters, even with heroic protection efforts, AND I have mostly hardy varieties (Brown Turkey, Chicago Hardy, Celeste, etc).

All that being said, I’ve been on cloud 9 this year because for the first time in years. My figs all look exactly like they did when they went to sleep last fall. Even the newest, thinnest little tips are Green inside. So hopefully I’ll get a nice breba crop and a great regular harvest. I don’t know if I’m the only one, but I firmly believe that my bushes produce better tasting figs on years that they do not have to grow back from ground up. Obviously they produce MORE figs, but I am convinced that mine also produce BETTER figs. Anyone concur or is that just nonsense? It’s hard to realistically compare tastes when 2 years separate the samples- but I still contend the fruit coming off plants that survived winter taste better than fruit off of plants that were killed to the ground and had to regrow and then fruit.

Makes sense that they taste better. Plants are less stressed and fruit is more likely to ripen earlier, when it’s hot.

I started unburying my figs from the mulch beds. Long term forecast looks pretty safe, fingers crossed. 3 down, 9 to go, so far they look pretty good. Small and green branches that were more exposed aren’t alive, but most everything is good.

That is very good news. No more potted figs for me because in-ground with Winter protection is less work.

Once I post some pictures of delicious breba figs maybe you’ll change your mind!

Should I prune to one foot and bury in mulch?

OR- cover with a trash can?

I’m willing to do some extra work to insure survival.

Hambone,
Somewhere I read that @hoosierbanana mentioned about why not heading cut fig trees would do better. ( can’t remember what thread). So we decided to wrap up all 5 ft of our Chicago Hardy with tarp and stuffed the cylinder with leaves).

Since the tree is talk so we put stakes inside at four corners to anchor the cylinder. We’ll see how it will do next spring.

Last year I headed cut it down to 2 ft. It took longer to bear fruit, almost did not ripen in time had the weather not been so unusually warm into Oct and Nov. 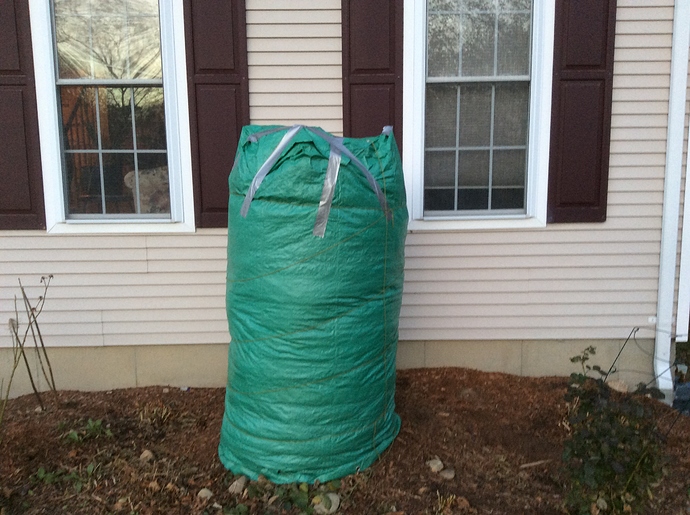 I have so much to do in the fall, protecting figs is not worth it for me. I had fairly good luck wrapping them, but it’s one more thing I have to do. I’m still not done with the fall chores. So I removed my in ground figs.I was going to put one in next spring, just for looks, then I ended up selling it to someone who wanted a gift for a family.member.
So for now in containers only. I’m happy with production, and I get plenty of breba.

I’d not prune but bend to the ground and bury with mulch. First year trees usually die to the ground for me because they are especially vulnerable and get zapped hard by the first frost, but still grow back to 2x the size they were.

@mamuang Pruning delays fruit set and ripening by quite a bit. With some varieties like RdB it reduces the amount of fruit set also. It also makes trees more sensitive to cold damage. People ask me “your fig trees are getting pretty big, are you going to prune them back?” and I explain that chopping them down only makes them grow more vigorously, that they were chopped every year for 5 years and they just keep getting bigger. With one pair it is totally obvious, the one chopped to 3 ft. this spring is now 12 ft, the other was left alone (6 ft) and ended up a foot shorter because it developed lateral branches instead of trunks.

My inground trees took that cold snap badly…anything not covered has damage already. Everyone wants to know what are the ultimate lows that figs can handle, but it is usually early and late freezes in between warm weather that get mine.

Brent,
You’ve inspired us to cover the whole tree. We’ll see how it will work next spring.

Do you cover your figs for winter? I’m zone 7a, mid-south TN, SW of Nashville.
First year with figs in the ground.