How do I shape this chestnut tree

Hi folks! So, as small as the tree in the photo appears, this is actually a 5 year old chestnut tree. Its just a seedling that I bought at TSC so who knows how long it will take and what quality the nuts will be. Surprisingly, i did get 2 chestnut hulls last year that had 3 nuts in each one but they were quite small. Hope it will improve over time!

Anyway, you can probably guess from the photos what I’m going to ask you all: Should I cut one of the two main limbs/trunks out. I know your first impulse will be to say yes, but lets please give it some serious thought! Obviously my fear is that one day in the distant future, the tree might split at the dividing point. Or perhaps one of the main “trunks” will eventually split and fall away.

But I have serious reservations about cutting one of these 2. For one thing, I’ll be removing basically 1/2 of the entire tree. Its taken 5 years just to get this much of a tree and I hate like heck to remove 1/2 of it. For another thing, in person it really looks like one of these two upward growing limbs is already starting to dominate and become the main trunk of the tree, while the other section really looks like its on its way to just being a big limb/scaffold. Third, if you look close, you may be able to tell that at one time there were actually THREE “trunks” growing up and I did cut one of them off about 2 years ago.

SO I’d love to keep this tree as it is for several reasons. But if you guys feel confident that its going to split on me someday, I’ll cut one of these off. Thanks in advance for any advice/guidance. 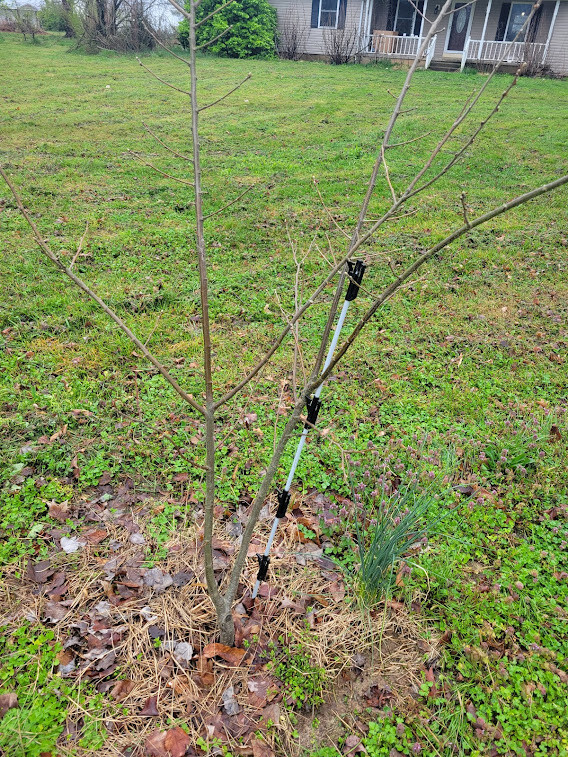 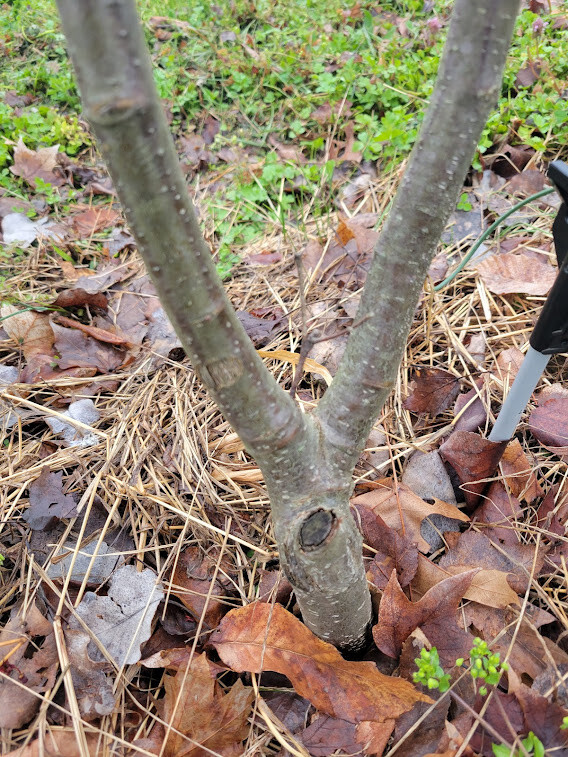 Kevin,
It looks like you have ample space to grow more chestnut trees. If you are concerned about the trunk splitting due to the weak “V” joint, I would also be concerned that it’s a strong possibility. An Ice storm or just an overload of fruit could precipitate that occurrence. If you review the video on utube for “successful chestnut air- layer” it’s a way of giving you a good excuse for severing the fork that you air- layer after this fall if you want to salvage the grow and start a new tree from the air layer. I have not air layered chestnut, but have done several other types.
Dennis
Kent, wa

I would cut the one on the right off if it was mine.

WOW!!! That is such a perfect solution to my concerns!!! As you seemed to pick up on from my rambling post about it, It was really killing me to cut away so much of my hard earned growth. If it was most other fruit trees I wouldn’t give it a thought- they would make up that growth in a single year. But HOLY COW has this chestnut grown slow!!! Its my first ever chestnut, so I don’t know if there is some environmental issue (shade, bad soil, micro climate, etc) or if all chestnuts grow this slow, but its taken 5 years to get that tree to the size a peach would have reached in 1-2 years. But yes, air layering would let me keep that hard earned growth, and also resolve my concerns about a future split. Would also give me a chance to try air layering. I actually posted here somewhere a few years ago saying how I rarely see anyone here showing air-layering projects but that I’d love to see some. Same thing is true today. I’ve seen less than a handful of air laying posts here EVER. But I have watched a lot of YT videos and it looks so neat. I’ll watch your video and very likely will give it a try. And I do have room for more and would love to have another. I actually have 2 other seedlings I bought last year but I could use a 4th.

I got into chestnuts because I wanted some large shade trees for my front yard, and you know I couldn’t just plant a regular non-bearing shade tree! haha. Chestnuts and Pecans seemed like a good way to get some nice sized trees that actually produce something I’d enjoy. But both grow fairly slowly in my limited experience.

Thanks also to Neil @BluegrassEats . Your confirmation of my thoughts help convince me that even if it hurts, this tree needs to be a single trunk. Thanks!

Chestnuts also like acidic soil so maybe check that as well maybe that explains slow growth.

When I have a competing trunk that I neither want to keep nor completely remove I simply shorten it so that the preferred trunk becomes dominant while the competitor becomes reduced to branch status.

Now that is a fascinating suggestion that I honestly had considered but had no idea if anyone had done that and/or if it would work.

This is why I love GF. org : I always get so many great answer. My problem now is deciding which one to use! ha. Thanks again, EVERYONE, for taking the time to try and help me out!

And if it does have small boring nuts, you can always graft something better on it.

I’ve found the actual size of a chestnut is far less important than ease of peeling .

Easy peeling is pretty easy to find. Flavor is a little harder.