How to extend Blackberry season?

Blackberry season starts here around July 1st and peaks the week of July 20th. The berries continue to produce until the second week of August. A friend mentioned his blackberries are already red a full month before mine start and produce a small crop all summer and fall. If timed correctly blackberries could be available all summer. What are your thoughts on blackberries like these
http://noursefarms.com/blackberry-plants/natchez_nm/
http://www.noursefarms.com/blackberry-plants/prime-ark-freedom/ ? What’s your experience on spreading out the harvest?

Depends on your climate.

Our season normally runs from the first week in June until the first week of August in Greensboro with 3 staggered variety. Start with Natchez then Ouachita then Navaho. The heat hurts the primocane blackberry here. Also hard on Tripple Crown.

My blueberry overlap with the blackberry so folks can pick both if they choose.

This is my plan. Whether it will work remains to be seen.

Apache for the latter 3 weeks of July.

Clark, there are two discussion about experiences with Prime Ark Freedom (PAF) that Auburn started. Most of those involved in those discussions are Southerners, but you might get an idea about its performance from those 2 discussions. It’s a recently released variety, which makes the info in those threads more valuable.

My own PAF floricanes have finished for the season. They started ripening right before the wild blackberries, and were very eager to get going for the year. They didn’t bear extremely heavily for me, but were just tiny tissue culture plants when I set them out last year.

The only named berries I have to compare ripening times to are Apache, which started ripening here 2 weeks ago. The end of the PAF floricane harvest slightly overlapped with the beginning of the Apache season.

This is my plan. Whether it will work remains to be seen.

Apache for the latter 3 weeks of July.

This is a good plan. Chester is later than Triple Crown. Boysenberry is earlier than Natchez, So id Tayberry. I have all of the above except Apache, I do have Navaho. Wyeberry is with boysenberry. Marion is a late one.

I like your plan and it is similar to what I started out with but my summer heat made it almost impossible to get a decent crop of Triple Crown. I’m going a different route and trying to get my berries ripe no later than my Natchez. I’m still not sure how the PAF will do but it did ripen 2-3 weeks before Natchez. What your doing is ideally what I would like to do. Good luck. Bill

@BobVance’s Triple Crown blackberry seems to like its new home in my mountain orchard! 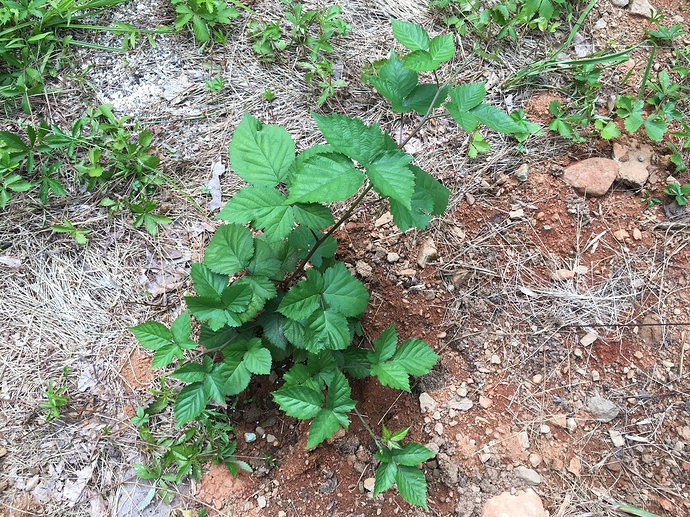 I don’t have experience with all those variety. Does Triple Crown have any problems with the Wilmington heat?

In my area Natchez hits about June 1 with Ouachita about 2 weeks later with Navaho a few weeks after that until early August. Where would you guess Triple Crown would ripen?

Also have you tried Von or Osage?

Ouachita ripens around June 1-7th here. I imagine triple crown is somewhere in the Navaho window. I’ve got plants on order - haven’t tried them but assume they will do fine here.

Osage hasn’t got great reviews from the people I’ve talked to. Von has high yields, mid/late season, big plants. Not sure about taste.

For me Newberry is ahead of Natchez.

This was by far my most disappointing blackberry, it never produced in my area.

Natchez was terrible for me. Not enough leaves to produce enough sugar. Tasted tart and terrible

Has anyone tried Josephine raspberries?

Hopefully I can extend berry season like this , but not sure of harvest dates in my area yet.

Looking for a u-pick local market opportunity. Want to focus first on taste.

If Josephine work well in your zone 8, we may try raspberries again!

We had about 1/3 acre of PYO Cherokee raspberries about 20 years ago when we were working with Dr. Ballington. They sold like crazy but crashed from the heat/virus problems after about 5 years and we never replanted.

During this same period, we watched a retired fruit specialist from NCSU sell several acres of Dormanred raspberries. They tasted terrible, nothing like a real raspberry, but they grew great and sold like CRAZY. Local raspberries were so rare that the taste did not seem to matter.

Raspberries are difficult for me but I also haven’t tried very hard either. I had Heritage but they failed after a few years. Caroline I read is supposed to do better in the South. A local nursery had Bababerry a few years ago, may swing by there and try to pick one up and give it a go.

I have only had Newberry for three years but it has done great so far and is easily the best tasting berry I grow. If a true raspberry doesn’t work a hybrid may be worth a look. It is thorny and trailing but well worth the extra work.

I’ve trialed every public raspberry available except Josephine. I know bush n vine in s Carolina has been growing this variety for years with success. I’ve never seen it available until recently at nourse. Nova will produce but doesn’t taste good. Nantahala doesn’t do well here either.