How to propagate gold/yellow Anne raspberries

So I got a couple of these last year and they grew fast and fruited in the fall. (some of the best raspberries we’ve had)

One died, though, and it appears that they don’t spread in any way. My other raspberries, it’s work to keep them in the same spot, but these just grow back up in the same place and that’s it.

Anyone done any propagation by cuttings or seeds and can give thoughts about the quickest/best method?

Tip-root them into some pots. They will be ready to go in the ground by next spring.

Give them time, they will start spreading soon enough.

Anne are aggressive spreaders in my yard.

can give thoughts about the quickest/best method?

I have around 25 Anne plants in two tubs right now. I have been giving them away like crazy. I had around 50 of them.

Dig up the entire plant when its dormant in early spring like you were going to transplant it. Trim the roots and plant each of those roots in a pot or where you want a new plant. I usually go with around 4-6 inch long roots… not sure how small you can go with success.

If you only want a couple or few plants then excavate the root area of your Rasp and locate how ever many plants you want and snip off a few roots and just plant those root cuttings or pot them up.

Last but not least. If you dont want to do any of that… take a shovel and spade around the plant about 6 to 8 inches or so away from the crown and wait for new root clones to form. And dig them up when you wish.

Remove the mulch around that area to a minimum for maximum results.

@krismoriah — just read your comments above and it reminded me about those Illini blackberry root cuttings we tried… I finally gave up on mine last week (no show)… nothing ever happened.

I went thru the compost mix I had the roots in and found those roots, rotted, no sign of any sprouting.

So now I guess we know… it is not so easy to propagate illini blackberries by root cuttings, may be impossible. Both mine failed and I think you messaged me that yours did nothing either.

That jives with the fact that in over 20 years I have never seen a root shoot from them.

PS… my Fall Gold Raspberries do send up just a few root shoots… but the large majority come up near the original crown. They are quite tame compared to my Reds which root shoot like crazy.

Are they getting enough fertilizer? Organics are best for cane fruits IMO. The Anne raspberry I planted late last Spring was a pathetic little thing and put on little growth. This year it has come in very thick, with many little suckers. Our soil is mostly silt and sand, with fir bark and compost worked in. If your soil is too heavy, it may be preventing them from spreading as quickly.
The black and gold raspberries are supposed to root from the tip, like blackberries. I believe layering is also a possibility. I have found that tip rooting is easy enough. You pin the tip to the soil with a piece of wire. Mulch and water, but not so much that it rots. Make sure you are trying to root a primocane, and not a floricane.

it is not so easy to propagate illini blackberries by root cuttings, may be impossible

Im still not totally convinced. But yes we both failed… the only variable we didnt try is chill hours. Perhaps your roots were so far down that they did not get enough chill? Perhaps your mulch is so deep from the 20 yrs that they never pop up?

This thread has me still wondering. To this guy they are invasive.

8 years ago when I moved to this property I was researching best tasting cultivars of various fruits, and despite my better instincts, I went for the Illini Hardy Blackberry …planted 25 of them in a double row of 12 /13 because the advertisement stated they tasted better than the thornless varieties. They failed to produce well, but I left them , year after year to give them another chance. I now know that the flavour differences between varieties is insignificant and each variety different but…

IF there is a next time… i think u or I should try getting some root cuttings in the fall and putting them in the fridge.

I know with your double rosette that tip rooting will result in the same disease… the only propagation technique that nobody tries is leaf bud cuttings… im not sure if the disease will pass via that route.

I just did a leaf bud cutting on a purple rasp and its taking so far. But i did it way too late…so its iffy. If i can get the timing right this would be the way to go for mass propagating… you have to do it on the primocane. I think. 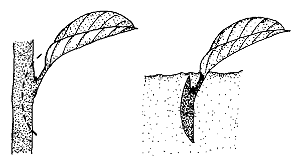 @krismoriah … I am wondering if Andrew actually had illini blackberries… or perhaps got some different variety as a nursery mixup.

I got my illini in 2003 from Starks.
Not sure where or when Andrew got his. He mentioned 8 years ago… so think he got his much later than I did.

That made the double blossom worse this year than ever before. Probably cut my berry production in half. Still getting some very nice berries… but less of them.

Think I will eventually replace them with something else… especially if I can’t find a way to propigate them and shed the doubleblossom/rosette.