How to Prune this Blueberry Bush?

I think this is the Northland blueberry bush. Due to deer damage, I had to cut the main branches to about 1’ long. Then deer caused more damages to the new growth. The bush has been moved to a fenced area.

Tentatively, I may want to cut off two of the five main trunks to force new canes from the crown. Retain the three best trunks for temporary support of foliage growth. Eventually I’d like to cut them off too to renew all canes. Just not sure if I should retain the remaining main canes and continue to grow on top of them. 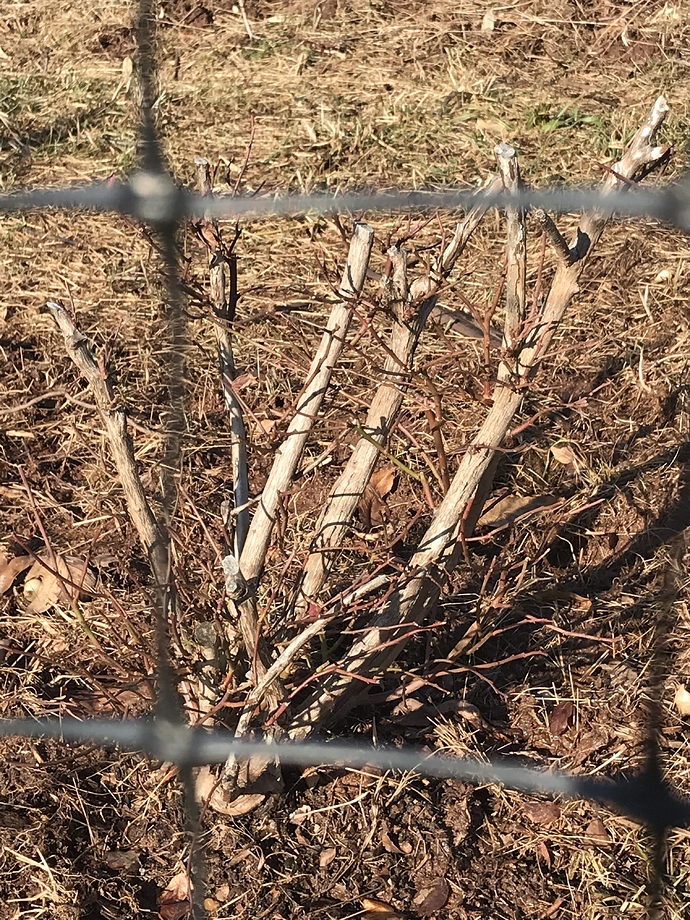 Removing one or two of the oldest canes shouldn’t hurt.

I would not remove any more wood. The deer already pruned it.

The bush has somehow been coppiced. I can’t keep all those weak thin branches. The question is if I should keep a couple new branches from the existing main canes, or renew the main canes in two years.

It appears that you have five canes that are several years old and some one year canes. Ideally you would have canes of all ages with the oldest removed each year and replaced with new ones.

No matter which way you go I think it will be at least a couple of years until you get some fruit. My thought is that leaving the older canes will require the plant to use energy to renew the growth on those canes. Since you don’t want them anyway it might be better to remove them and let the plant direct growth to the new canes.

I’d probably hedge my bet by leaving a couple of the older canes for now and remove them in a year or two. By then the younger canes should start producing for you.

I think your on the right track i would remove a couple to crown and also thin out twiggy growth/any flower buds to get it going vegetatively agaun. Theres a proffessor from oregon state thas does videos apparently most growers dont prune enough off so…

The question is if I should keep a couple new branches from the existing main canes, or renew the main canes in two years.

Both are acceptable. If new growth looks good, I prune to new growth. Since it was pruned by the deer, I would give it a very light prune. Blueberries do not respond well to over pruning.