How to reduce greenhouse temperatures?

I got a large greenhouse, its got slatted vents in the bottom, and automatic vents in roof.
Its also got shading. Door is left open night and day.
Also a freestanding fan working 24hrs

How can I reduce the temperature on a cost effective basis.

Heat rises, so many greenhouse designs have screened ventilation openings at the top of both ends - with a fan mounted at one of the openings to blow air out. For example, if the ends are an “A” frame, then the openings are just inside the top of the “A”.

I would probably like to close the door and vents to stop mice, squirrels etc getting in.

What about a fan on glass adjacent to door low down sucking coldish air in, and fan on opposite end top of the A frame sucking hot air out. mesh on fans to stop mice getting in.

you need moore ventilation.
and paint the white, outside of greenhouse.
with limewash

One air exchange per minute by ventillation will hold inside to about 15F higher than outside. Twice per minute will give half that rise inside.

What I have is large exhaust fans on one end moving about one air exhange per minute outside and a wet wall on the other end. That will hold inside about the same as outside to as much as 10F cooler if dew points are really low. A good evaporative cooling system like mine is the most cost effective way to really cool a greenhouse unless your dew points are really high.

Evap cooling is extremely effective with dew points below 50F and not much help at dew points above 70F. Mine works well in mid summer with 60-65F dew points.

You don’t need a fan both top and bottom. Go with a really powerful exhaust fan as high as possible. Then put large screened opening at the bottom to let cool air inside

Running a third fan only lowers temp by about 2F.

The greenhouse doesn’t need shade cloth to remain near outside temperature all summer.

That’s very effective cooling for the cost of running two 1/4 hp exhaust fan motors and one 1/6 hp on the wet wall pump.

The only problem is I have toughened glass, and I am not sure on how to get a big hole in it. Or maybe forget about a large bit of it being glass, and use some sort of boarding.

Imagine the air flow as water moving through a river. You need to work with the flow, not try to fight against it. Else you can spend a lot of energy and accomplish very little.

Hot air goes up, you need to pull it there. Heck a fan twice as powerful blowing into the hot building would churn the air but have negligible effect on getting the hot air out, which is your ultimate goal. Once it gets sucked out of the structure fresh air from the outside gets sucked in to replace it.

thanks I understand that, good thinking.

I am looking at exhaust fans, dammed expensive for a big un.

Is it my thinking, maybe stupidly, that you cannot temperature in a GH lower than the outside temp, with just fans??

Is it my thinking, maybe stupidly, that you cannot temperature in a GH lower than the outside temp, with just fans??

That’s correct. Any kind of ventilation alone whether it be with fans, rool up sides, large roof openings, etc can’t lower inside cooler than outside. And since inside can warm up 15F in one minute that’s the reason for rapid air exchange to hold down temperature rise.

Well yes you can with something called a swamp cooler. It uses water evaporation to remove heat from the air. Energy (heat) is spent in the evaporating process. If you thought a big exhaust fan was extensive wait until you look one of those up.

But there is hope: a correctly placed exhaust fan can be much smaller than one in the wrong place, several smaller ones could be cheaper than a large one, and this is definitely the sort of thing I would wait until I find a used one.

Heck check out this puppy: 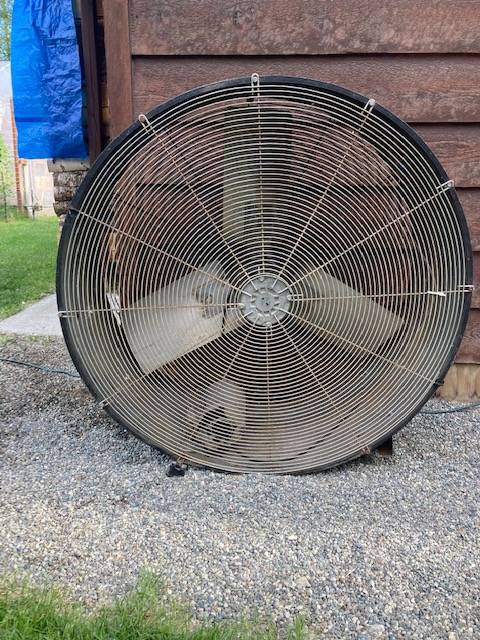 42" fan, belt driven to a 1/2hp motor, currently $50 On anchorage Craigslist. This could make a monster swamp cooler, which is basically a setup with water dripping into fabric strips in front of the air path. The air with the water removed is significantly cooler than the initial air. A much smaller exhaust fan would then be in charge of pulling hot air out at the top.