How to sun dry hot peppers

As the fall is closer to the end, I got a lot of hot peppers that are ready to be picked and dried. I prefer sun dry them then grind them into hot pepper flakes
I am looking for best way to dry them under the sun. Should I take the green stem off first? Should I remove the seeds inside? Should I cut them up first? Should I blanch them first?
Usually how many days it take to have hot pepper dried?

I have already spoiled first batch of attempted sun dry hot peppers. They didn’t dry for many days and started to mold. I thought it is best to ask before start second batches.

If it’s thin walled, you might be able to get away with sun drying. Otherwise you probably have to process them, butterfly them or cut them open remove seeds, stem, and then splay to help them dry out.

You’re five minutes away from me and with the weather cooling, and less intense sun out now, it may be harder to do unless the weather warms up even though we have low humidity now.

I have successfully dried peppers but my way was to ensure good air movement in the process. In my case I used a fan. The peppers were tied in a ristra with string and suspended with a good flow of air. No mold. Sun or no sun, I think it’s important to keep that air moving. I leave the stems and seeds on but stick them in a few places. Now I use a dehydrator.

I can’t tell they are thin wall or not. Mostly habanero types. We still have plenty of warm and sunny days left here, should be enough to dry peppers. In winter time, I dry salted meat under the sun without spoilage .

I can’t tell they are thin wall or not. Mostly habanero types. We still have plenty of warm and sunny days left here, should be enough to dry peppers. In winter time, I dry salted meat under the sun without spoilage .

We have really nice dry winters though. If it’s thin walled and not much wind, the inside will just bake and ferment inside out.

Do you have a picture of the peppers?

I would remove the stem, cut them in half, scrape out the seeds and membranes with the edge of a knife and then leave them cut side up. If they aren’t very open, I usually smash them flat under the blade of a wide knife or spatula. You can spread out the seeds and membranes separately to dry if you want to process them as well to add more heat (particularly the membranes), but I’ve found those are the parts most likely to start growing mold/fungus so I prefer to have them away from the main parts of the pepper so the won’t affect the rest.

I generally don’t include the membranes and seeds myself, since for most of the peppers I can’t stand the really hot heat so I’d rather get the less intense parts in my powder or flakes so I can actually taste the peppers. But even though I grow a bunch of very hot peppers because they’re fun and interesting, I’m more of a Jalapeno heat level person.

I’ve had good results drying whole cayennes in the refrigerator. I just put them on a plate and after several weeks they are dry with no mold.

This is the easiest method so far

Sounds a correct way to dry them. You know what hot peppers I got. LOL

I’ve had good luck just hanging them on a price of thread by the window to dry. Once in awhile one will rot but with proper air flow and light they usually dry just fine.

If you want to build some infrastructure something like this would do it in record time. 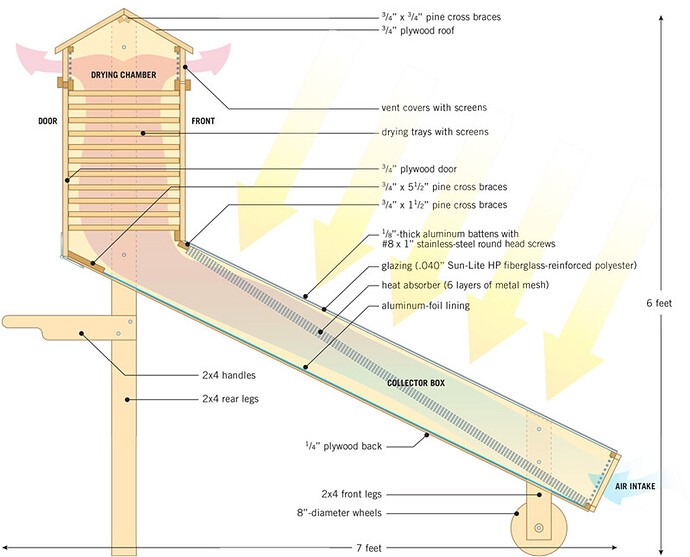 The metal mesh and aluminum foil lining heats up, which in turns heats up the air that raises, pulling more air into the process. By the time the air hits the trays it is warm and ready to accept more moisture than when it was colder.

Autumn sun at Chicago latitude unlikely to dry habanero-type pepper slices enough to grind into flakes. Try putting them under glass or other clear sheet in an enclosed space with a small fan, all in the sun. Seeds may be easier to remove after drying.

You want to make my home made hot sauce into a factory production.LOL

Thank you all for wonderful, creative, unusual, unconventional suggestions. all are appreciated. The peppers are on thick side , cut them up is a good idea. Here they are my hands are burning. Ihad gloves on while cutting them.

You want to make my home made hot sauce into a factory production.LOL

I’m thinking about doing something like this because of mushrooms. Harvesting them by the five gallon bucket full? Easy. Processing several of those loads through my round food dehydrator? Not as much fun.

Plus tomatoes, salmon, fruits, beef jerky; it opens the doors to a very effective way to preserve all sorts of harvests.

Don, great idea. It looks like the construction can dry fruits as well which is much preferred way for me. Roughly looking through the design, it looks like the dryer just needs a fan or nofan atall to suck in air then let hot air raise natural and exit on top very economic design and can have a large capacity. Please post steps so we can learn how to do it and what are involved if you construct one.

Actually you don’t need a fan. The heat chamber is lined in aluminum foil and there are several layers of extruded metal. As the air heats up it naturally raises so there is no need for a fan. It also has the advantage of keeping what you are drying away from direct sunlight, which has a detrimental effect on vitamin retention. 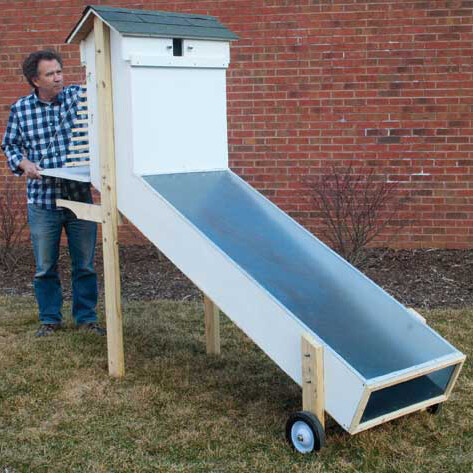 I’m hoping to build something a bit more compact than this.

If days stay warm and dry I suspect you can successfully dry even thick walled peppers if you cut them open to let the moisture escape. However, if it clouds up you can also bring them inside and use a fan and a room dehumidifier and small room heater to dry them even more quickly. Best to use a window screen as a wrack.

When drying them outside you may need to bring them in at night to avoid the dew.

I simply dry mine in an oven, being very careful it is done at lowest possible heat with door slightly open. I learned my other methods decades ago by drying herb in a trailer, if you catch my meaning.

I remember reading that article years ago when I had subscription to Mother Earth News. Seems like a great dryer and it was the first thought I had when I read the title to this post. Being on grid and not needing that around, I just go with the round American Harvest with a few added trays. I love it, the fan, the temperature control. It turns out really nice finished product , and most importantly to me it does it fairly quickly so my food dries without further nutrient break down.
As a side note to other posts, I also slice my peppers in half and scrape them out. I get plenty of heat for my needs without the guts and if I need more heat I just add some powder from one of the hotter varieties.

, I just go with the round American Harvest with a few added trays.

That’s what I have and have certainly gotten my money’s worth. My problem is that since I got into mushrooms I can come back home every day with a 5 gallon bucket full. It takes away from my enjoyment of life having to process so many mushrooms through the bottleneck of the round dehydrator.

What I really want is to incorporate the dehydrator into the south-facing attached greenhouse I’m building next year. Basically the greenhouse would have a port where I can connect the box on the inside and the heating chute on the outside.