How & when do I propagate wild blackberries?

Good Morning All! My name is Pat, and I’m new here, so greetings to everyone, an a Happy New Year. My question goes like this: I’d like to have some of the wonderfully delicious blackberries that grow wild in our area (Intermountain NorCal, Zone 7a), but I need to know when and how to propagate them. I’m aware of at least some of the risks of planting wild Blacks in my yard, but these things are so very successful up here, and so incredibly delicious that it seems a little silly to to buy plants and hope…anyway, any and all advice is welcomed, including the “bewares”. I know some, but not everything, and there just may be some tidbit of info that might make me think twice about this project. Many Thanks, Pat from NorCal

I’m no expert on your climate though can tell you blackberries should be transplanted when dormant. There are a few things I would do to reduce risks such as cut back the top to a few inches above the ground, leave the dirt at the location and move them barefoot. Give the roots a good rinse in water. Give the top a good spraying or dipping with an antifungal such as captan. An expert in your area may have other or better advice more relevant to your area. You can edit your title to get there attention to say something like " How and When do I propagate blackberries in North California". The advice I gave you works great in Kansas but California has different rules , regulations, pests, growing conditions etc.

You could just dig up some of the plants from the old location and transplant them to your location when the plants are dormant if you just need a few plants. If you need a lot of plants at the new location, root cuttings work well. I’m not sure about any rules or regulations that may govern that type of activity in your area, so you may want to check it out first. I borrowed the info below on root cuttings from the University of Florida:

Root Cuttings. All blackberries can be propagated by root cuttings. This is the fastest method to produce new plants. Cut roots ¼–½ inch in diameter into 6-inch pieces. They can be directly planted in the new location, grown as a potted plant, or placed in a plastic bag in a refrigerator. When planted directly in the field, uneven stands often result during the first year. Potted plants can be grown in the nursery for up to one year. When planted in soil, they should be covered with 2–4 inches of soil. Planting is best accomplished during the winter. Substantial quantities of suitable roots can be had by plowing a furrow and severing the roots adjacent to the mother plant.

I did exactly what you are describing 3 years ago. I knew less then than I know now, and basically I just took a shovel and dug up several wild blackberries with balls of dirt and roots all together. I took the plant and a rootball that was about as large as I could fit into a 5 gallon bucket. Most of the wild blackberry plants did survive and came out in the spring. (I dug up the plants in the winter). What surprised me is that it took 2 full years for the new plants to really thrive. The first year- at least from what I could see above ground- they basically just held their own and each plant only had one or 2 stems. Even the second year, they didn’t send up much in the way of new growths. They did have a few more sprouts that turned into long stems, but all within inches of the original plant. But then came the third year…and the difference was dramatic. I had wild black berry plants coming up as far as 4 feet from the ones I started. And LOTS of them. I kept the new plants to a limited area by mowing down those that came up too far away, but if I had wanted to just create a large, wild blackberry patch I am certain it would have spread as far as I would let it.
Now, all that being said, just because I can do something doesn’t mean I should. In my case, even in the 3rd year when new plants were shooting up everywhere and the older plants (“mother plants”) were very large, they never have produced berries anywhere near as large or as tasty as the patch I took them from. And- even the largest ones- produced very, very few berries. And I did fertilize and take care of them. During the exact same time period I planted several varieties of cultivated blackberries I bought. By the 3rd year they were producing 10 times as many berries, had much bigger and better vines, and the berries were almost as good as the wild ones (maybe as good in some cases). In short, for me it was a fun experiment, but a fools folly. I’d have been much better off to have just gone with commercially developed plants.
Please keep in mind that nothing in my story-including the way I transplanted- is being offered as the “right way” to do it. I didn’t know about root cuttings or other, better ways to do it. I also like in Tennessee, which is obviously very different from Northern CA. So none of this may apply or be helpful. But I thought you should know that even a beginner like me was able to transplant wild blackberries, but in the end it wasn’t even close to being worth it (for me, in my environment, with my wild plants, etc). But its fun trying things like this, so I wish you luck if you try it.

Wild Blackberries are loaded with all kinds of disease in my part of the country. They are a weed that I work hard to destroy. I try to kill everyone that I see on my farm, but the birds constantly drop seeds which produce more wild blackberry. The cycle goes on and on.

They often carry Orange Rust which is a devastating disease that can destroy a planting of cultivated blackberries. Even blackberry plants from certified nursery often contain one or more diseases.

The disease situation may be similar in Northern California, but I’m not sure.

If you were here, I’d say to just follow me around and take what your wanted whenever you wanted. I spend an awful lot of time ripping them out. They produce well and one daughter in particular really enjoys them. Nothing seems to bother them. The problem is that the wild blackberries seem to have a goal of taking over everything. I can rip them out all day, dig out roots, whatever. They just keep coming back as strong as ever. They are very persistent once established and need to be hauled off or burned because they’ll just take over the compost if thrown in there, or reroot along the vine if left on the ground.

I’m not sure they ever do go dormant here. The ones I was ripping out this week were covered in buds just about ready to open. That’s about 2 months earlier than usual here. The fruit is useful, but the plants choke out anything that I actually want to be growing. Also, I don’t enjoy the way they slash up my arms and legs and leave me to dig thorns from my skin. Didn’t mind it so much when I was a kid. I think the forbidden adventure of collecting them was a large part of the pleasure. Now I far prefer the thornless cultivars that stay in the area where they intended to be.

I thank everyone who responded to my question about transplanting wild blackberries. You’all have helped me enormously, and I’m grateful. Actually, I have lots of education in apple genetics (oh boy!..)…and other pome and stone fruits, but berries aren’t my forte. For anyone interested, though, Fall Gold raspberries did GREAT for me in (of all places, Los Angeles!), as did a Misty Blue and Sharp Blue blueberries (they grew to 4 1/2 feet in 3 years). A medlar, whose name now escapes me, did amazingly well also. OK, enough rambling. Thanks, thanks, thanks!!!

Blackberries are something I grow a long ways away from everything else. Let us know how they do! This is my grandfathers strain of blackberries. The best gift he could have given me. They have been in our family a long time. They can grow to twenty feet tall. 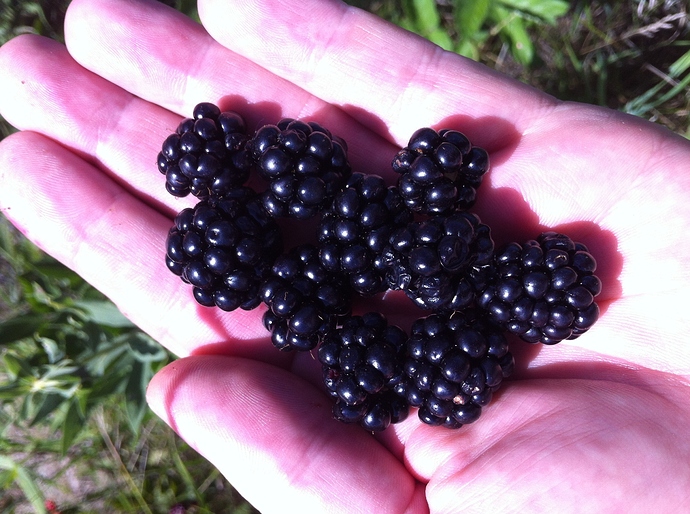 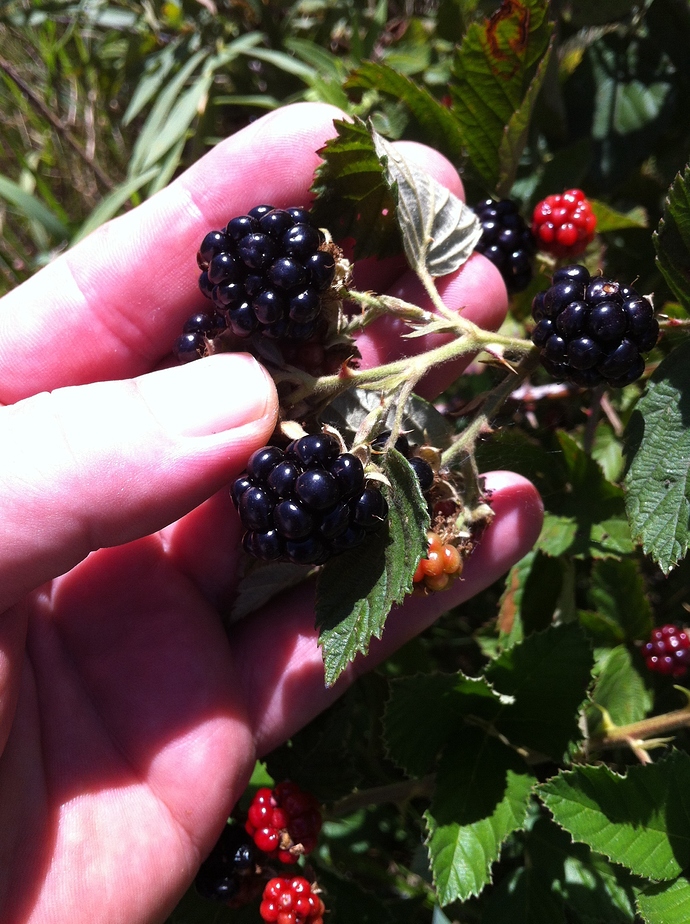 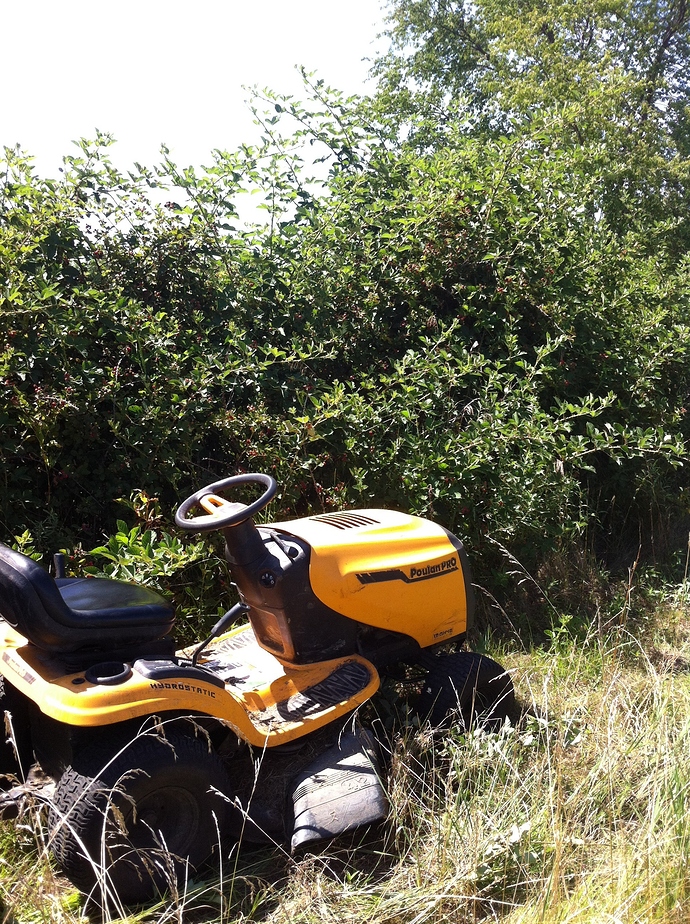 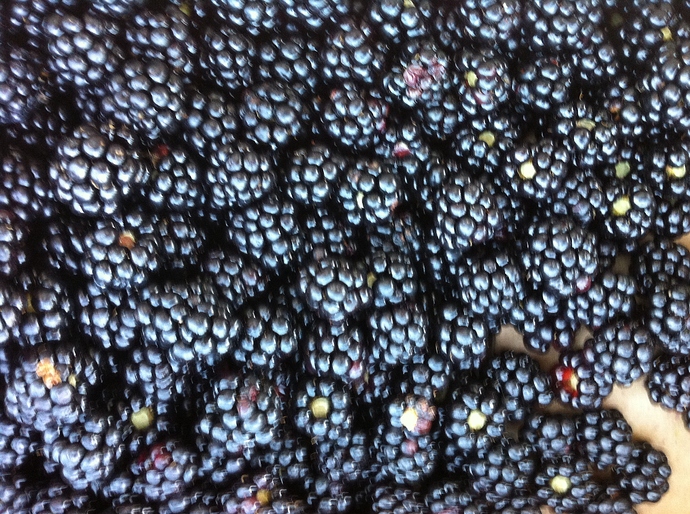 Actually, the wild apples around here (the closest blackberries…Himalaya, I think they’re called, are about 12 miles), tend to be a HUGE Cedar Rust and coddling moth problem…it’s hardly worth trying to control it in your own yard, due to neighbors who don’t care about their 8 trees, wild trees on empty lots…ugh!!! I spend a lot of $$ out of pocket, I also ask donations from neighbors,teach neighbors to prune trees for free, buy LOTS of coddling moth traps! lol!

Blackberries(and other berries)can be propagated by using cuttings from actively growing plants in late Spring or Summer,using a misting bed.I take off about 4 inches and make a diagonal cut at the bottom end,dip that in growth hormone and stick in media made up of mostly Perlite and Peat moss.
I use a Mist-a-matic and also have a pond fogger setup that works well. Brady
Here is the video that introduced me to the fog propagation. 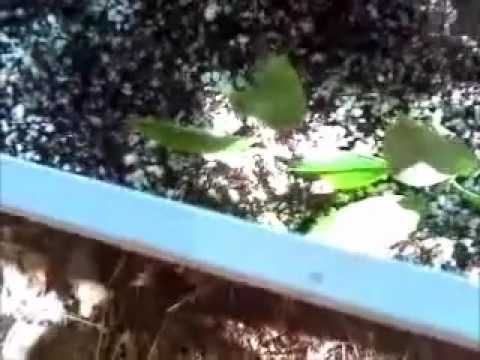 Sounds like you are pretty serious about rooting cuttings with the Mist-a-matic! Do you root a lot of stuff?

I tried rooting blueberry and blackberry for the first time last year using the materials I had around the house - (Lowes sprinkler timer and bark mulch in 3 Gal containers) It worked better than expected so I bought a better timer and some mist nozzles for this year. Can you suggest a good rooting hormone that I could use as a liquid solution rather than a powder?

Hi Rick,
Yeah,too many Blueberries and Blackberries.I bought the Mist-a-matic used,locally for about $50.Quite an ingenious invention.
I’ve also done some Honeyberry,Autumn Olive,Chilean and Pineapple Guava and Cornelian Cherry.
Right now,I’m using some Dip n Grow that an acquaintance gave me.Seems to work fine,but I don’t put it on the Blueberry cuttings.Oregon State University,I think,did some studies and found no benefit there. Brady