Article gives you some reason to hope for the survival of bees over colony collapse.

Several years ago I thought about getting into beekeeping, but I had limited time, wanted to establish an orchard, and the chance of failure seemed hi. Now that my orchard is pretty much established I’ve got a bit more time. This article has sparked my beekeeping interest again.

honeybees aren’t native to America. many are saying we should be looking to our native bees instead of honeybees to do our pollinating . of course these big bee keeping companies that truck these bees all over the country and sell the honey dont want to hear that. all my pollinating here is native bumble, mason and leafcutter bees with some flies and moths/ butterflies contributing. its too cold up here to realistically raise honeybees because the long cold winters do them in. and you have to leave much of the honey to get them through a winter. ive never seen a honeybee in the wild here. also the native bees will pollinate much earlier and later in the season when honeybees cant fly. I’ve also read native bees pollinate as much as 5xs more than a honeybee can. maybe we should be looking to raising these bees instead of the honeybee? every other year i order mason/ leafcutter bee cocoons to hatch out in my yard. some years i get them to nest back in my bee boxes. others not so much but at least im adding some to my general area as well as some genetic diversity as i get mine from northern idaho. if everyone did this every year, we could replenish our native pollinators instead of dumping millions into trying to save a non-native bee that obviously needs to be babied more than the natives do. my 2 cents.

If you find a swarm, there is no way to tell if it is a “wild Darwin mite killing survivor swarm” or your neighbor’s Florida bees from down the street.

Dr Seeley’s research is great, I’ve read a couple of his books.

@marknmt , @ampersand
C. Darwin is best remembered for the concept of evolution and early humans, while it is R. Fisher who clarified processes of natural selection. 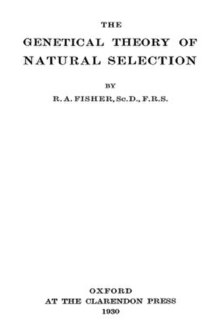 The Genetical Theory of Natural Selection

The Genetical Theory of Natural Selection is a book by Ronald Fisher which combines Mendelian genetics with Charles Darwin's theory of natural selection, with Fisher being the first to argue that "Mendelism therefore validates Darwinism" and stating with regard to mutations that "The vast majority of large mutations are deleterious; small mutations are both far more frequent and more likely to be useful", thus refuting orthogenesis. First published in 1930 by The Clarendon Press, it is o In the p...

If you find a swarm, there is no way to tell if it is a “wild Darwin mite killing survivor swarm” or your neighbor’s Florida bees from down the street.

Just wait and watch. If it’s commercial bees they’ll die off after a while without mite treatments. If it’s hygienic bees they will self regulate and will likely persist.

I would like to add that if you have the good fortune to acquire hygienic bees (a term for the ones that remove mites one their own), please do not discourage them from swarming. It’s tempting to feel bad for “losing” a swarm, but in reality every empty hive or tree hollow they move into will be a hive or tree hollow that now won’t get filled with commercial bees. The last thing you want your neighbors with empty hives to do is fill them with purchased commercial bees that will then breed with your well adapted bees and set them back the next generation.

@JohannsGarden
Are the activities of hygienic bees an acquired colony behavior or a neurological genetic trait?

It seems to be genetic rather than learned based on what I’ve read over the years as well as based on my (small scale) personal observations.

I, too, have spent money on mason bees, but to little avail. It’s not clear to me that what I have done is at all good for the native population (if there is any).

I, too, have ordered cocoons from west of the Rocky Mountains. The cocoons hatch, but they tend to emerge too early for the Midwest and abscond or otherwise fail to thrive because their life cycle is not synchronized with the seasons here. They may not be able to take full advantage of pollen sources when they are available, for instance. Also, they may not provide enough pollen for their brood to make it through longer, colder winters here.

Bringing in foreign populations may indeed diversify the local gene pool, but it is not clear to me that it makes the local population stronger. In fact, it may weaken it with individuals that are less well able to survive here.

Unless one can secure local sources of bees acclimated to local conditions, I think it best to stick to exotic species such as horn-faced bees that do not interbreed with native species.

where i ordered them from is very similar to my weather here. i researched before buying. they are a little dryer there but besides that the seasons match. i wouldnt buy some from like northern Cali. or N.M. they hatched out the same time as my local masons did.

Dr Seeley’s research is great, I’ve read a couple of his books.

I’ve heard him give his talk on wild bees in a room filled beyond its capacity. I had to stand in the back. With a gentle delivery, he is a very persuasive speaker.

Many who live in densely populated areas can’t fully practice Darwinian beekeeping in mimicking the natural environment, and Seeley knows that is unrealistic for urban and suburban beekeepers to space out hives a kilometer (3/5 of a mile) apart. Seeley recommends instead for backyard beekeepers to keep no more than two hives and space them at least 100 feet apart.

We are in a rural area, so we can do that. However, after almost ten years of beekeeping, we failed to keep colonies alive three years in a row. Two years ago we tried to follow Darwinian beekeeping more closely and bought locally raised bees and placed two hives on opposite sides of the orchard, one much farther away, so they were perhaps half a kilometer apart. The downside of getting local bees was that they arrived after petal fall. Then neither of the two survived the winter.

In frustration, we haven’t bought bees in two seasons. Maybe a swarm will volunteer to get us started again. We originally got started in beekeeping with a swarm, and I’ve captured another one a few years later, so it could happen.

Native pollinators did a fine job two springs ago, even if this spring we had a terrible off-year, so I’m not ready to buy bees again.