How many of you are hybridizing stone fruits as a hobby/couriosity/plant improvement? 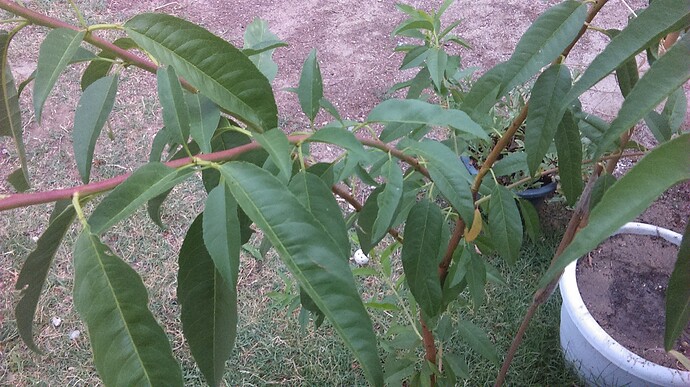 Well i want to grow some seed, and they will be hybrids, but I have no intention of marketing any crosses. Just for home use. Rootstocks, as a curiosity etc.
Now with brambles I do want to develop a marketable cultivar. I found some niches that are empty. I found a need for hardy complex flavor blackberries, and for various colors of raspberry. Easily marketed in they have other good qualities like disease resistance, a good growth habit , great taste etc. I need about 20 years though to work though various crosses. If it ever happens, it won’t be any time soon. With trees I would think at least 20 years. Not like your first cross has much chance of being that great. If it was we would have thousands of breeders, we only have a handful at this time.

For me it’s a attractive hobby, mainly arise because I was looking for some variation in different sorts of growing fruits.
Since for me it is impossible to buy this ‘special fruit trees’, purely because they are unknown over here
My preferences are stone fruits and particularly varieties which are hardly known here in Europe, ie Japanese plums and their derived such as Pluots- Apriums.

Yellow and white Flesh Sub-Acid modern varieties nectarines and peaches come in advance, a couple of these seedling plants supplying me so far surprisingly fun results with a very good eating quality.

I also have a very nice result achieved with a seedling sweet cherry ‘Starkrimson’, the descendant has some better features than the original variety.

We are keeping going on this passion

Alcedo, what’s the fruit that you have on your picture profile?

Are any of them good?

The peacharine, myrobalan x Japanese hybrid, and the plumcot produced fruit this year, but a March frost wiped them all.

The showing fruit on my profile is my best result seedling white flesh Sub-Acid nectarine .
my experiment began 2006 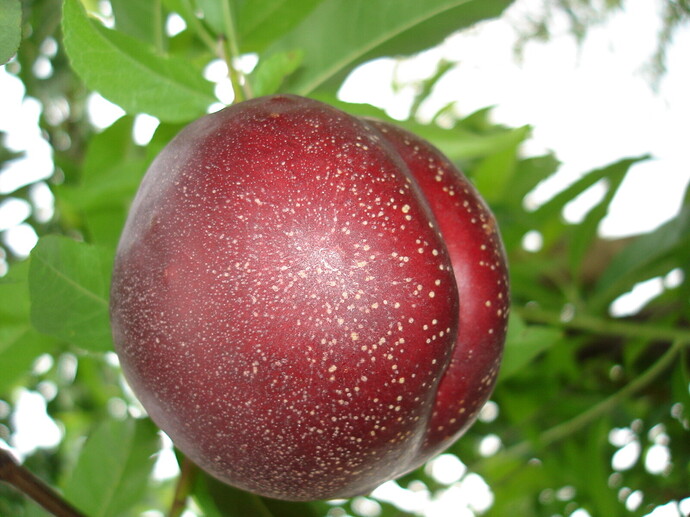 Wow! That sub-acid nectarine looks exceptionally good! I think I like it except the “sub-acid” title. I’m not quite fond of sour taste fruit. Maybe more crossings with more times turn its offspring into the sweet-winning category?

Subacid - Originally meaning "mildly sour, but now referring to flavors that are “slightly sweet” low in acid.
The key description of white-fleshed stone fruit is that they are “sub-acid.” Now, sub-acid sounds like some underground band and not like something you
should put in your mouth. But it’s simply the old acid/alkaline principle. The less (sub) acid, the sweeter the fruit. This can be a boon to people seeking less
acid in their diet. White peaches and nectarines come in an array of complex flavors and aromas.

Try crossing it with a peach.

I got an idea! Since we all are fruit enthusiasts, we should start a breeding program, and after our hybrid trees start producing fruit, we should trade scions.

Or idea number two: we should start a breeding program and after our hybrids begin producing fruit, we should post pictures of our hybrids. In other words, like a fruit show; and no trading scions involved.

Idea number three: Fruit breeding program. Just post pictures of your hybrids no matter whether your a fruits are award wining or the ugly duckling.

All good ideas. The real limitation is having room to grow out the seedlings. Zaigers have something like 200,000 seedling trees in their test blocks. I’ve got room for maybe 50 seedlings and water for none but only expect fruit about 1 yr in 3. That slows things down even more.

I agree about the room. Still i will grow some seeds for fun. I don’t expect to compete with Zaiger or CRFG Hybridizer Group. I like Arctic Glo and Indian Free and would like a cross that ripens between them. Glo ripens here in August, IF in October. I’m hoping a cross will ripen in between and give me something I would like. Other than that I would rather breed brambles for fun, it takes a lot less time too! Maybe blueberries too!
Alcedo’s work with sub acid fruit is interesting too. I like sub acid too, I just find the acid fruits more interesting. And what’s strange is everybody who ate my Arctic Glo’s and Indian Free didn’t describe them as acid. I noticed when they sat a few days at room temp even though the brix didn’t really change, the acid seem to mellow and they tasted less acidic to me. I can’t wait to have enough to make preserves. Even though I had about 20 of each, they were gone in no time. I need about 50 to steal enough for jam or preserves.
Now I need some good acid yellows! Hoping to graft some on. My first attempt at grafting didn’t go well. I managed to kill most of the scion before I could even graft them, oh well, I’ll try again this year!

I have an idea!

Since no one has invented a cherry x peach hybrid, as far as I know, let’s try to create one. Then, let’s post pictures of the seedling(s).

let’s try to create one. Then, let’s post pictures of the seedling(s).

OK, I’m going to use Carmine Jewel with Indian Free. It could become a bush peach tree. The fruit may be quite tart (hey just how I like it!). You know this might be really valuable. Maybe this would result in a zone 3 peach tree, that would sell like gangbusters! Indian Jewel peach bush will buy me retirement. Hardy to zone 2a. Right now I’m hoping for Indian Glo, or Maybe Arctic Free peach.

My son just bought 40 acres up north, zone 4b, a good place to plant seedlings to start anyway!
My Carmine Jewel is big enough to flower, so I can actually do this cross in the spring. One of the major problems is room, but not a problem on 40 acres, very cool! I could cross most of the flowers on Indian Free with Carmine Jewel pollen. I happen to know they flower at the same time, or at least did this year. I had about 5 flowers on Carmine Jewel.

If the hybrids turn out to be sterile, they could be used as rootstocks for peaches and cherries.
That’s what Zaiger did with Citation rootstock, a plum x peach hybrid; which turned out to be a very successful rootstock.

I will also cross my peachmond with a cherry.

This is one of the things I enjoy about this hobby: there are still wildernesses left to conquer. The average man has a good shot at becoming a top expert in some niche here, advancing the state of knowledge and maybe even developing something new. Good luck in your experiments!

I plan my planting seasons to align with my rainy seasons. This fall there was precious little rain = precious little planting. I have a good cache of water I’m sitting on but during a drought it counts for very little.

Hey it’s for fun, no big deal. I like growing plants from seed. I’m taking the last of my tomatoes this year to make one last batch of sauce today. I have enough sauce for a couple months. All grown from seed. Next year I’m growing more peppers. No sauce tomatoes next year. I have a lot of projects going on, non-gardening. I’ll make up for it the following year.

How do you choose which one is better for accepting the pollen of the other? Or doesn’t it really matter?

Most of my stuff blooms roughly together…so cross pollination should be pretty easy.

I grow a lot of seeds out and have lots of various types of seedlings.