This year my Redlove ODYSSO gave me ONE fruit that survived to this past weekend.

It was on the small side (see photos below) but the tree is young and skinny.

I was ready to say… “ok, it still young, give it some time”. I took a bite and the skin was kind of thickish, I was ready to spit but then after a couple of chews getting past the skin…WOW!!!

Juicy, sweet and great acid with great “apple” taste. But, then a definite strong Berry backflavor once the aromatics came back up through the nose.

If it keeps up, it just pushed Ashmeads Kernel and Karmijn De Sonnenville down a notch on the top 10 list

LOOK AT THAT COLOR
Mike 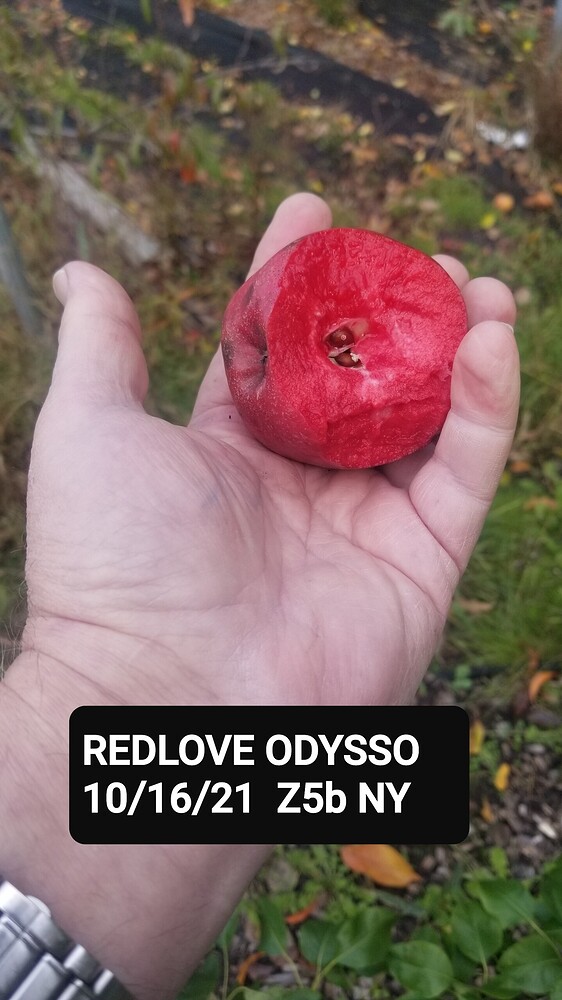 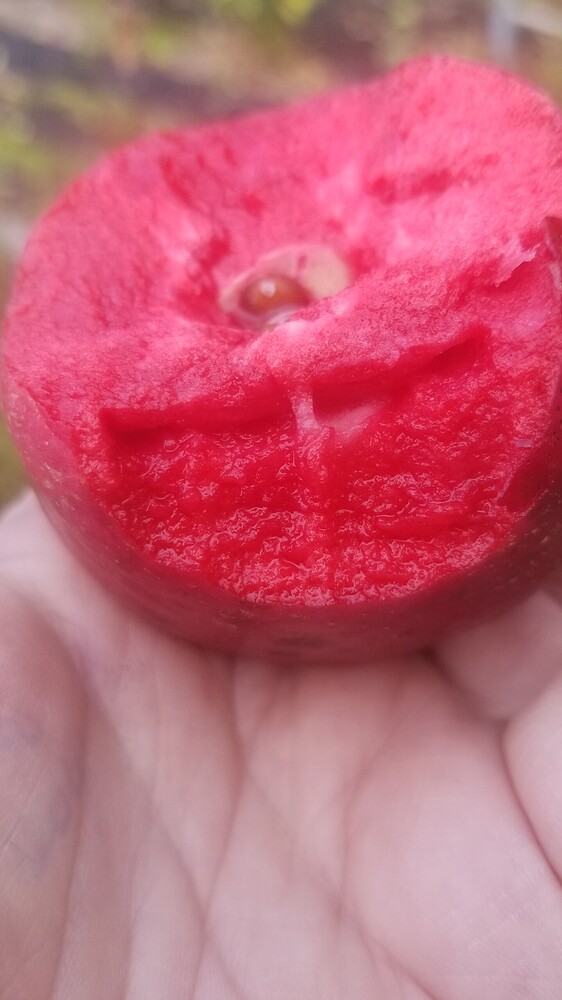 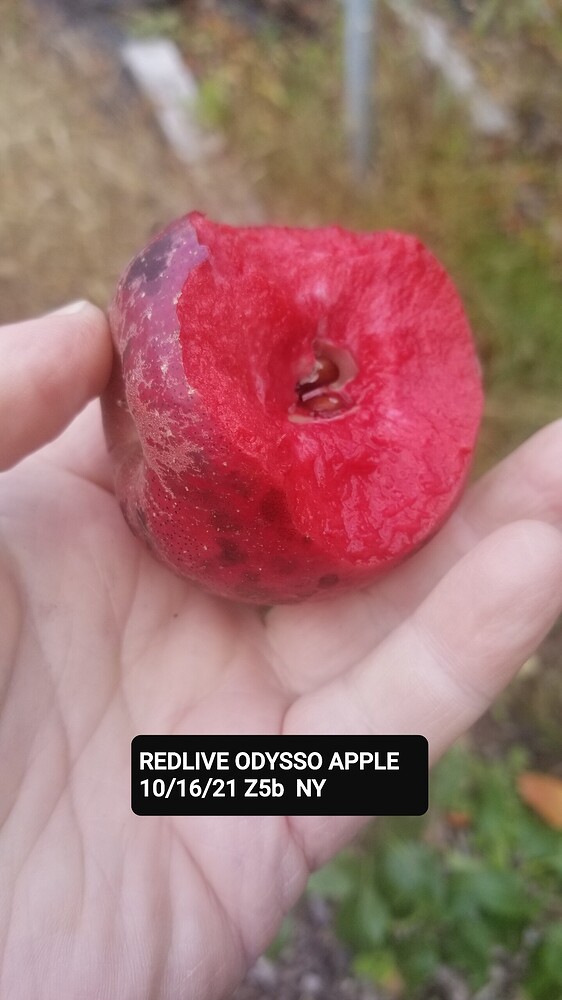 Nice apple.
Mine is my only Redlove not bearing yet. I have that, Calypso, and Era trained as espaliers.
Maybe next year.
I wonder if all of the Redloves are smallish apples.
Was your apple on tip or spur? Maybe I jinxed myself cutting off tips to shape the espalier.

I got to try a little bit of Calypso this last weekend and was similarly wowed. I didn’t have plans for anything like the Redlove series in my limited space, but I’m reconsidering that position. I’m assuming they’re all under patent?

I can’t find any evidence of patent, just trademarks.

Great pix! My one fruit was not nearly that red inside. And it had black infertile seeds.

I also didn’t rate it that highly. (Maybe next year).

Very pretty. If someone could produce a decent apple with that kind of red flesh it would be pretty cool and would likely sell well as well.

Show me a red flesh Fuji and I’ll gladly buy it.

I like several types of apples, but the common denominator is that the apples I like are sweet. Fuji is close to my preference though a good Honeycrisp is a bit better. Red Delicious is sweet but not tart enough. All of these can be ruined by improper harvesting or storage. So yes, I like sweet, tart, crunchy apples.

Wow! What a beautiful apple! I have redlove calypso and I absolutely cannot wait to try one day!

I have tried some red fleshed apples. My favorite is Pink Parfait. From what you described, it looks like it could fit your description.

Aerlie’s Redflesh AKA Hidden Rose AKA Mountain Rose is the 1st red-fleshed apple that I’m confident I’d pick as a winner in a blind taste test.

There are a couple of club apples that fit the bill for me too now.

I’m growing 3 of the Redloves, but haven’t tasted any of them yet.

Generally my impression of red fleshed apples have been way too much acid, too little sugar, and too soft and/or mealy.

@Murky, that is my experience so far too with both Calypso™ and Era™. I don’t care for them so far as much for fresh eating. although caching them at the right moment, they are like cranapple. However, they have a place for me in a blend, for pie filling or sauce. They add brilliant color and some fruity flavor. About 1/4 Era™ and 3/4 Jonathan or other pie apple makes for a beautiful and tasty filling.

I jumped at the chance to grow some Redlove™ cultivars when they came onto the US market. I thought that would be my only chance to taste them. That is probably true. Lubera describes Odysso™ as the sweetest of the three available here. I hope mine bears next year.

Lubera has one called "jedermann’s which they say is their most conventional redflesh apple, for “Everyman”. That sounds a bit like saying they actually know their others aren’t for everyone. I think I have enough varieties but if it came onto the US Market…? I don’t know. I might be at the same place as I am with Zaiger introductions, which is to say I’ve already tried enough to satisfy my curiosity.

I agree with you about Airlie Redflesh. It is tasty. One thing about those, in my garden they get more scan than any other.

I expected my Calypso to be tart or very tart from I read your and others people’s comments. I was pleasantly surprised that it was that tart at all, only a bit tart and fairly juicy with good “berry” flavor. We had tons of rain this growing season. Not sure how much that much water could affect the apple’s quality.

I shared the other half of my only Calypso apple with @jcguarneri who stopped by. He gave it a positive review as well. He has more complex taste buds than mine.

I had my first Redlove Era fruit this year. Excellent! Sweet and tangy with a good apple flavor and texture.

Please post a photo of your Aerlie Redflesh apple. We are in Annapolis, Md. and have the ‘traditional’ apple trees (Red Delicious, Yellow D., Honeycrisp, Gala and Winesap). If I can find a red-fleshed apple … with high sugar… I would plant it. Of course, this is assuming I can find it at one of the local garden centers in 7-10 gallon pot. (I have had terrible success with the bare root trees you get through the mail)

I’ve collected nearly 30 red fleshed apples…but if you want a high sugar one, you’ll have to start a breeding program (like I recently did).
Odysso didn’t reach that definition.
I’ve not gotten to sample Pink Parfait or Pink Pearl…but I’m not expecting high sugar if they bear next year for me.

I don’t have it producing yet. I’ve tasted it at Home Orchard Society tastings, and have bought some from local boutique and farm stand markets.