I got Strawberries from USDA today

I have an order in too. Still waiting.

Did they ask you to set up a Paypal account to help with shipping costs?

In my experience you send them a FedEx account # with your order.

Oops. @Richard is correct. I should have said FedEx account… not Paypal.

No, just an Email from UPS that I had a shipment coming.
They are small but healthy. I have them in a humidity dome as they have no to very few rootlets.

I had put in a request a while ago for

Anxious to see which ones they will send…

Today, I spent quite a bit of time situating the strawberry stolons to encourage maximum rooting. 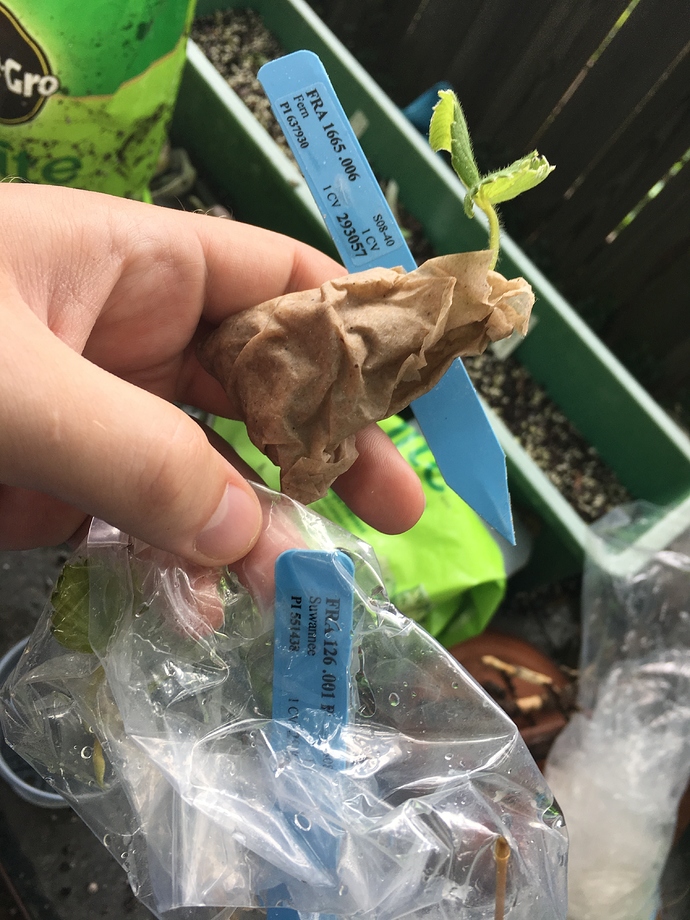 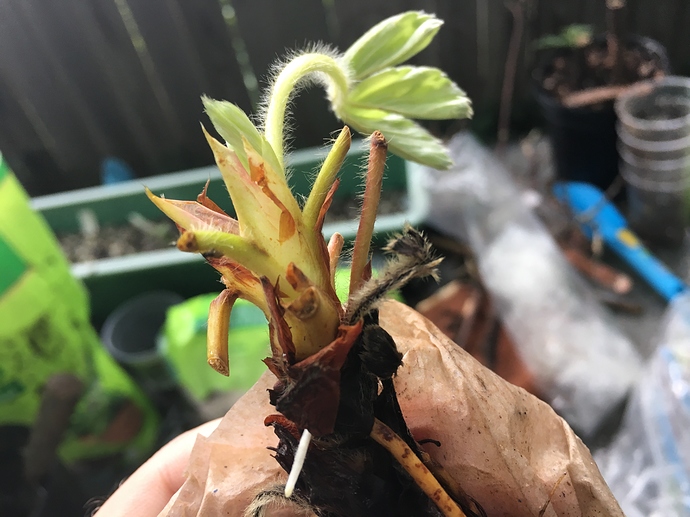 The government sent at least one runner of each of the ten (10) varieties I requested! 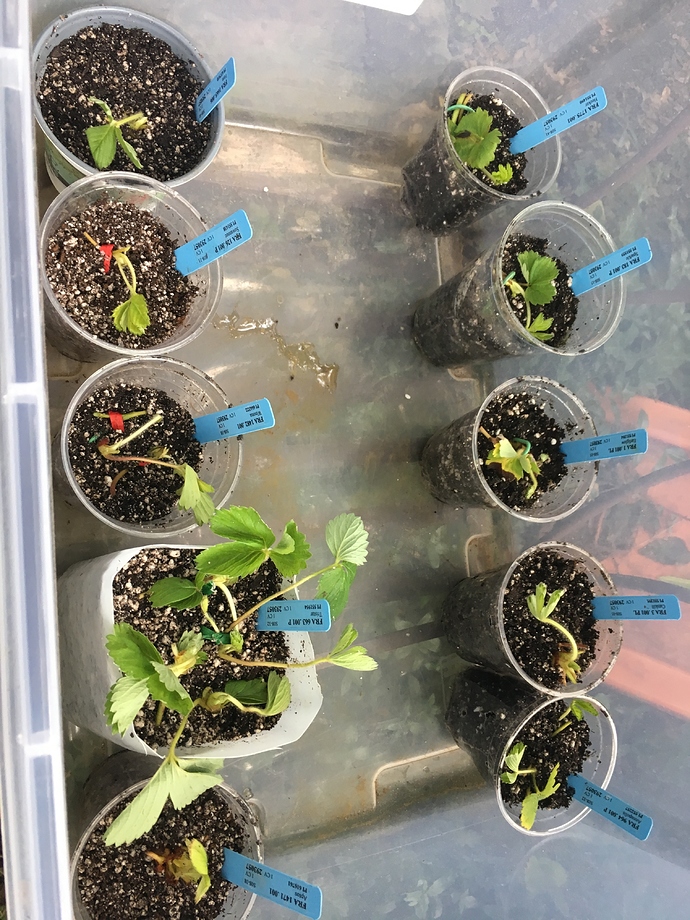 Putting the lid on the humidity bin: 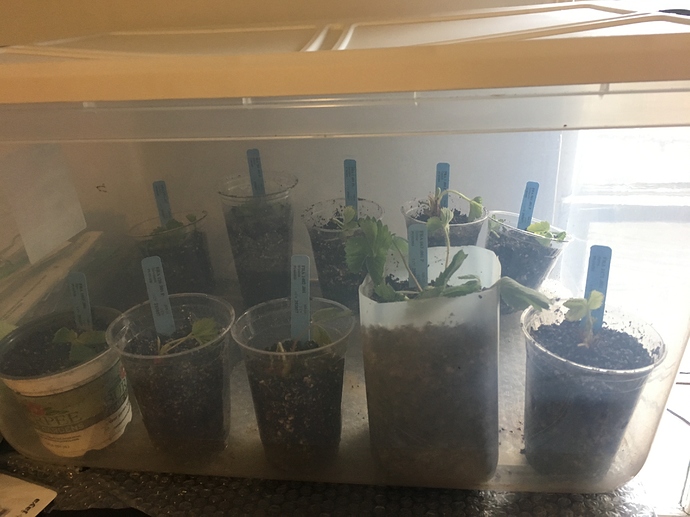 I’m most confident about rooting from TriStar, Aptos, and Catskill, especially the latter two, because USDA sent me full-blown already-rooted crowns of those. Rather than just one or two… they sent four or five stolons of TriStar.

So in the US people can ask USDA for free plant specimens or do they have a site you order and pay for them? I don’t think Canada has a government agency that distributes plants.

On the other hand, a few Metro Vancouver municipalities have spring sales on discounted fruit trees (ie. $10/) but you have to bring proof of residency. Burnaby does NOT but I’m going to try to go with my dad next year to get a couple from Vancouver.

Americans can submit requests to USDA-GRIN. The material must be used for research purposes, which is widely interperable. The research I proposed is to observe the performance of the cultivars on land I own, and in potted culture, in my Zone 6b/7a climate. Material is made available at the discretion of the various USDA station offices. Quantities are limited, as is their ability to collect, process, and mail the material.

It is a wonderful service-- one I wish would be expanded.

Thanks for this info. Very interesting. I wish Canada had a similar program.

Today, I clipped off any dead or moldy growth and put them outside on a table in part-shade, risking critters digging at them. I hope they benefit from the breezy ambient summer humidty.

Obviously, the crowns are doing the best. The stolons are struggling. 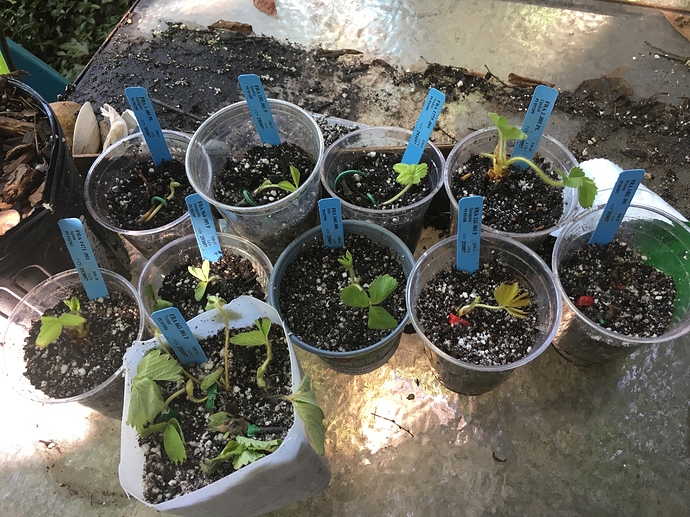 Belated message to say I received the strawberry pieces, thanks. The crowns are doing the best, but some of the stolons might make it too. After a little time in the humidity bin, they are outside in part-shade in the breezy ambient summer humidity. Loose mix of perlite and peat with holes punched in the small plastic pots. Special thanks to your team for sharing this important germplasm for the benefit of American researchers.

How did these end up doing for you?
I’ve been working with the White Co Historical Society looking for apples from the Louis Hubach nursery that was near Judsonia AR. After they’ve had several stories about the nursery in their monthly newsletter they’ve had people contact them about some of the older strawberry varieties, Mr Hubach was more famous for his strawberry crosses.
GRIN has Klondike, which was very popular at the time and, though not one of his varieties, sold by Mr Hubach. I’m hoping I can get this variety for the WCHS as a way to say thanks for the help they’ve given me.
Obviously I need to find out how best to root them before August of this year should I be fortunate enough to receive any.

The strawberries are currently flowering, and starting to send out runners. All are nice healthy plants except for Califour, and 1 Ettersberg 121 those are growing but struggling.

USDA sent very nice plants as I would expect. Most were unrooted stolons (3 were crowns) I planted them in seedling mix under a humidity dome for a couple of weeks (I really didn’t expect them to live). Then in October transplanted to a fenced area in the garden to spend the winter.

Good luck! I think I would use a little rooting hormone next time? The are designed to root so that may not be necessary.

Tennessee Beauty was as close as I could find to Missionary, the later being a parent.
Now the wait till August.

USDA sent me strawbs last year. After a valiant effort at rooting them, the stolons died anyway. Only some crown pieces survived the initial transplant and subsequent seasons/ up-potting. Through this process, I have obtained Catskill and Aptos. They overwintered in pots covered with pine needles and leaf litter tucked into a sheltered spot behind the house.

I recently translocated them into an old tipped-over bookcase. Left to right: Catskill, Aptos, and two squares of Mara de Bois from @zendog. 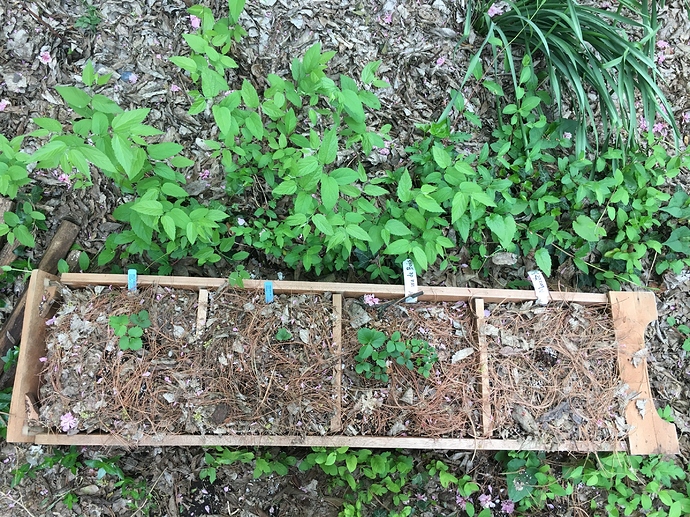 The recent sunshine has really perked up Catskill. It looks good.

Aptos is barely hanging on… but I think it will pull through.

My son ordered Klondike for me and while I’ve not received mine, his came in.
Humidity in this part of the country is kickin so I potted the crown in a potting mix plus peat and left the stolon connected to it, but buried it slightly.
I’m watering at least twice daily and have it under my peach tree so it gets only very filtered light. 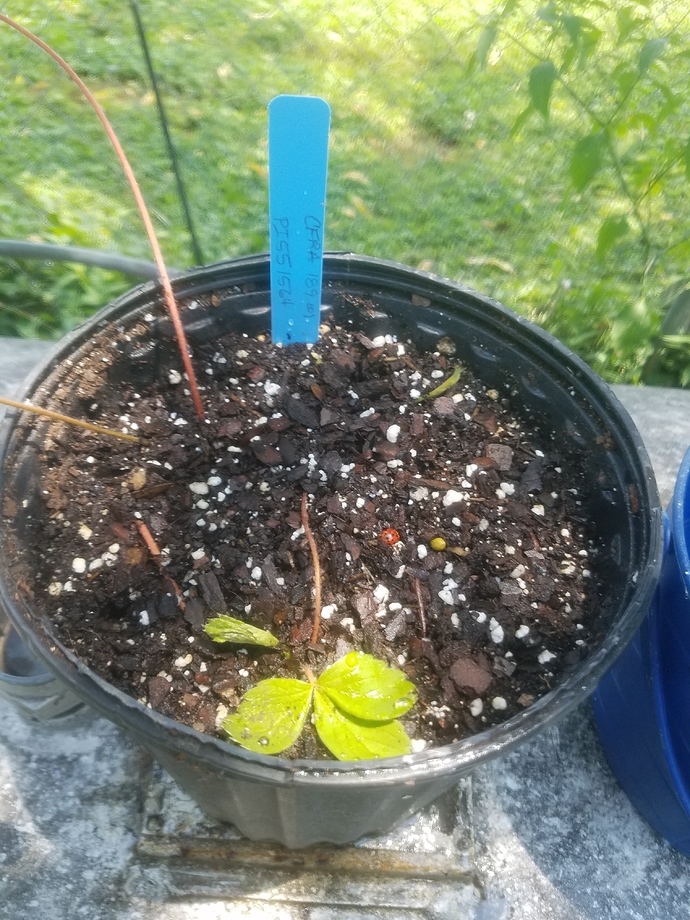 Scott, How nice to hear the USDA has Dunlap! I hope it does well for you (and the others, too, of course). I’ve grown it for some 25 yrs and it is the sweetest strawberry I’ve ever had; I really like it. It’s a challenge some years to keep it going (I have a lot of leaf spot) but it’s been worth it. Our climates are very different and it’ll be interesting to see how yours do. Sue 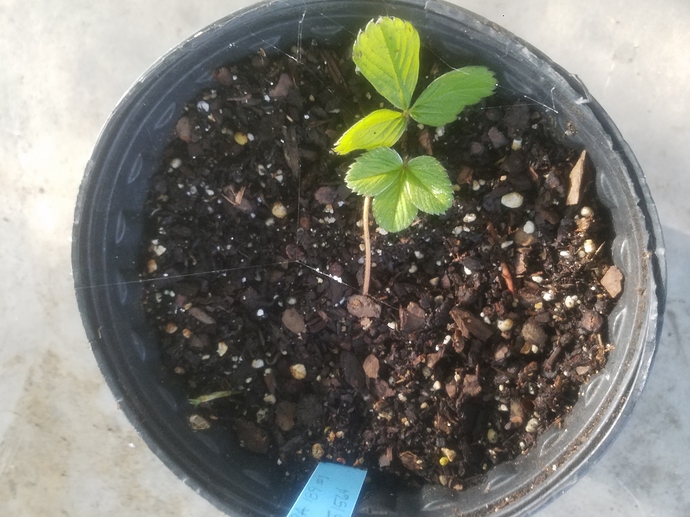 So far so good, already growing.