This year I went for 3 to 4 stems, and it got unmanageable. The problem is trying to figure how to stake the secondary stems that appear that you want to keep. It just goes against my organized nature, and wanting everything planned out from the get-go.

I am convinced that the best way to go is high density planting of 1 stem tomato plants. You designate 1 stake per tomato, prune off all suckers, and don’t have to deal with how you’re going to support new limbs later.

Most of my experience comes from Brandywine this year. They seemed to really hate the heat, then got hit with some kind of disease, then the disease stopped in September when the weather got cool, and the plant finally put a bunch of suckers and tomatoes which I had to pull in late November. They are now reddening in a bag with bananas. They’re mostly small.

Any objections to 1 stem tomato plants?

I did 6+ stems this year and it made an awesome bush but it was crazy and unmanageable. I was also planning on a tight row of 1 stems next year, same reasoning. I saw some videos of greenhouse production in this style and liked it

I guess the best way to do it is try it. Every year is an experiment. I heard a youtuber saying that his Brandywines are still pumping out tomatoes single stemmed and that it has been a success. I’m trying to take his lead.

I Tried 1 stem with aggressive trimming of side branchs last season. Was happy, for a while. Earlier rippening, cleaner and less maintenance! Then real Summer started with temp up to 100’ F. Fruits got sun damaged, then stem damage, then diseases and stunt growth. By August which normally I have 2+ lbs fruits on BW and other beefateak, they were practically stunt with 8oz fruits and low sugar.

If you are in hot sunny area, absent shading cloth, you need enough leaves and some branches for best results. This eason I will go back to 2 stems with some lower branches.

Trees that were not aggressively trimmed still going to date! Early girl is early and stay late (to next season) 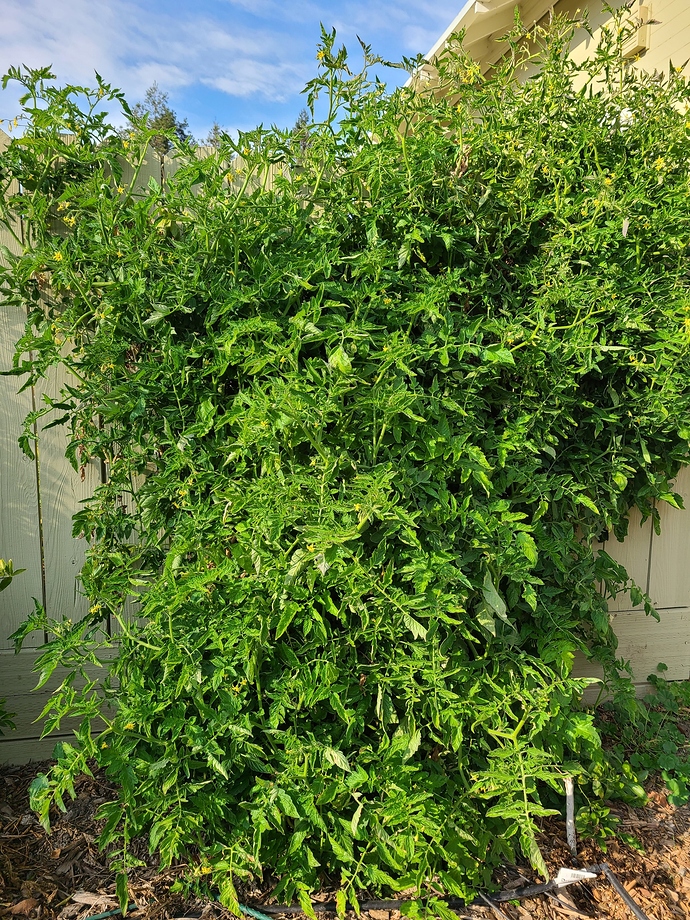 Yea what you have there in that picture isn’t going to work in GA. I would have snakes, frogs, lizards, slugs, squashbugs, cucumber beetles, etc. partying inside of that jumble. Possibly a tiger as well.

My question to you is how dense did you plant the 1 stemmed tomatoes? I’m thinking if I plant 1 per feet, it will solve the sun scald issue.

LoL … I hear you.
If I recall, it was 4 to 5 plants staggared in 4’x6’ planters (zigzag) over 6ft high wire mesh support. As long as you balance shade protection, air flow and mlush below to protect from rain splash I guess you will be ok.

I have done 2+ stems every 2 feet for the last few years. When I keep up with it, it is nice and clean, and tomatoes ripen early. I did run into the sun scald issue because I was removing most of the lower leaves. Next year will leave more leaves on and/or use shade cloth when it gets too hot. Also considering 1 stem every 18”.

I tried not pruning suckers this year and I think it got kind of unmanageable. Next year I’ll go back to one stem every 18" more or less. Didn’t much care for Early Girl and I think I’ll see if I can’t get Early Cascade going. Haven’t had any problem with sun scald yet.

How does asking all the wrong questions and getting a medley of answers none of which really address the problem actually answer this? Here are the right questions.

You state indeterminate tomatoes which means they need between 16 and 20 square feet of soil space per plant. This can be modified a bit by increasing soil fertility, but even with highly enriched soil, at least 12 square feet per plant is needed. If using a stake system with single stem, they can be closer with as little as 9 square feet per plant.

When is letting the plants grow as many stems as they like desirable? In a very hot climate or in a high altitude setting (Denver CO or similar) most fruit will be sunburned in a single leader growing system. For these climates, I recommend training to at least 3 stems and maintaining heavy foliage cover over the fruits. What about the hot humid southeast? We do better with wider spacing because disease pressure is very high. Huge masses of foliage with closely spaced plants provides ideal breeding ground for Septoria, Early Blight, Late Blight, Gray Leaf Mold, Bacterial spot/speck, and other diseases.

When is single stem desirable? If you live in a mid U.S. climate like Kentucky a single stem won’t have as much problems with sunscald and can permit high numbers of plants in a small growing area. The only other time I recommend single stem is for greenhouse growing conditions where each plant is grown on a single stem and shade cloth is used to keep solar intensity under control.

This is the type question that could go on and on with other answers and other requirements. For example, what varieties would do best in your growing conditions? Brandywine is notorious for low production in a hot climate. Start Brandywine plants early enough and they will produce an abundance of fruit before the heat causes problems.

One last thought, this has been asked before and answered by university researchers. The most productive growing system for indeterminate tomato plants is with wide spacing letting the plants sprawl and letting them produce as many stems and as much fruit as they can. Start with a highly productive variety like Big Beef… Then again, remember that when plants sprawl, fruit touches soil and that leads to a lot of disease and pest pressure.

I write the following to document my own thought process for justifying my approach:

Main strength of this method:

Weaknesses of this method:

That is a workable plan, suggest adding the possibility of putting a piece of cloth over fruit that are directly exposed to the sun… If you want big tomatoes, get seed of tomatoes that can grow really big and still taste good. Omar’s Lebanese and Crnkovic Yugoslavian come to mind.

Great. I’ll document my results in this thread next year.

By big tomatoes, I just meant a handful sized tomato - not necessarily gigantic. With the sprawling method, I noticed a lot of tomatoes not living up to their genetic size potential.

Omar’s Lebanese looks a lot like Brandywine based on internet images, but bigger. Thanks for the suggestions.

@chingchungly If you are still around, how did the single stem method work out for you? I’ve noticed this seems like a hotly debated topic in the gardening world. I’m giving it a try this year mostly because I am still trying to figure out my favorite varieties and this method will let me try more in the allotted space. I’m in Northern Illinois and don’t think sunscald is quite as much an issue here but guess I will find out!