I am in Northern Wisconsin, zone 3/4, and I’m trying to identify an apple tree that I picked on August 11 because they were ripe. I imagine I am in a colder zone than the majority of you, so to give a better idea of the time of year, I also have a Zestar tree and those apples are not ripe yet (I tried the same day and it was pretty sour and the seeds still white), so this mystery apple ripens at least a week or two before Zestar I would think.

The apple went soft pretty quickly as would be expected from an early apple. The flavor was decent but nothing too unique or special. I am making them into applesauce which it seems to be good for.

The tree is one that my Grandpa planted and I have no record of what it is. I’m guessing it is 30+ years old. He often bought trees from Stark Bros so it may have come from there.

Here are some pictures I took of two different apples from the tree. It is an attractive apple. You can see that some stay fairly green and some turn mostly red. The top and bottom of the apple is also quite bumpy. Some of the apples have a little bit of russetting around the stem.

Does anyone have an idea what variety this is? Thanks! 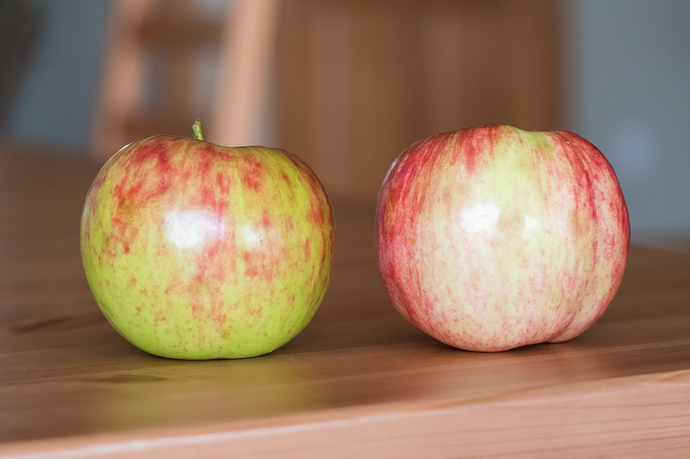 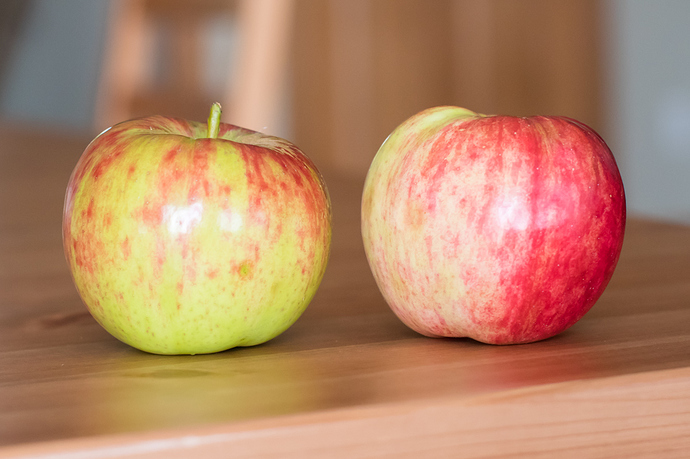 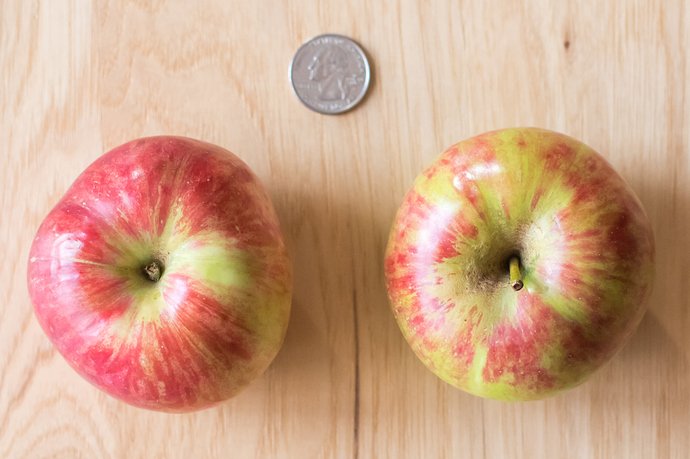 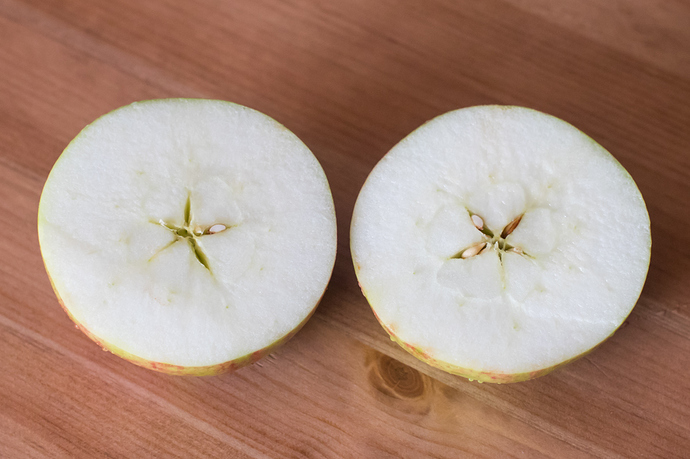 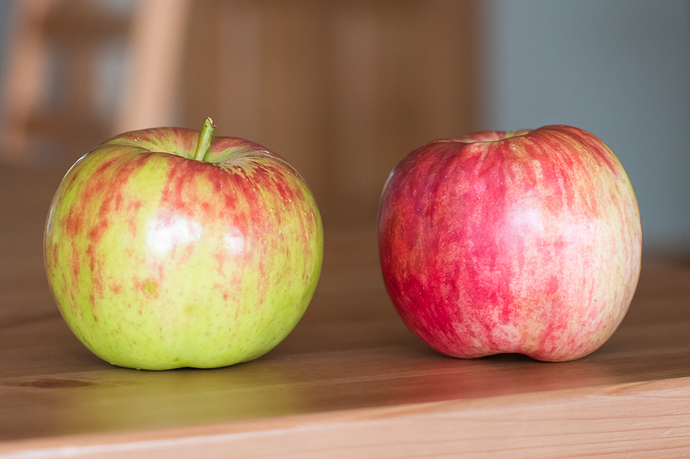 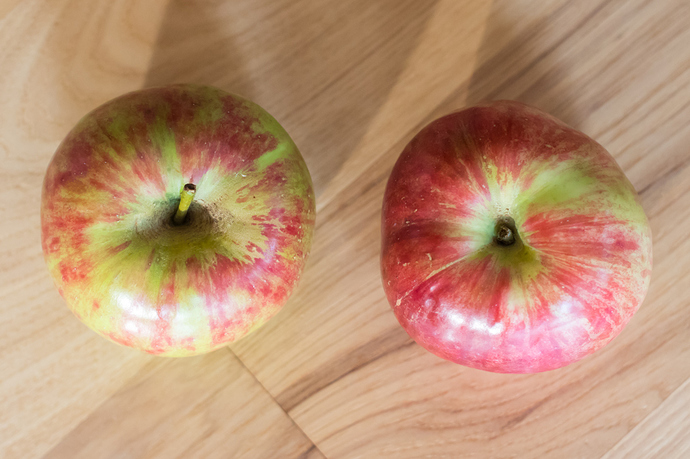 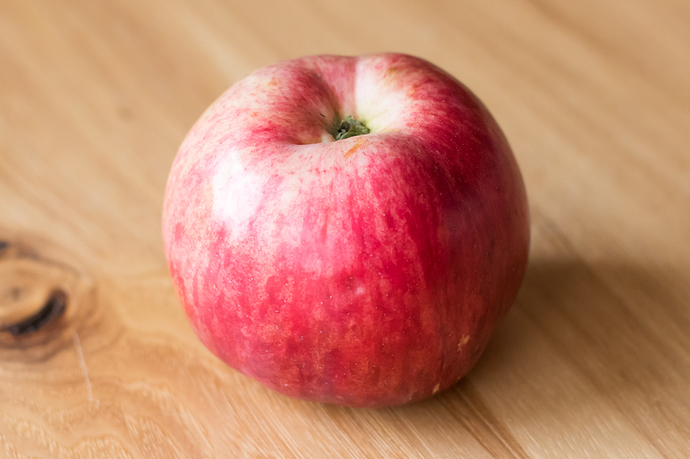 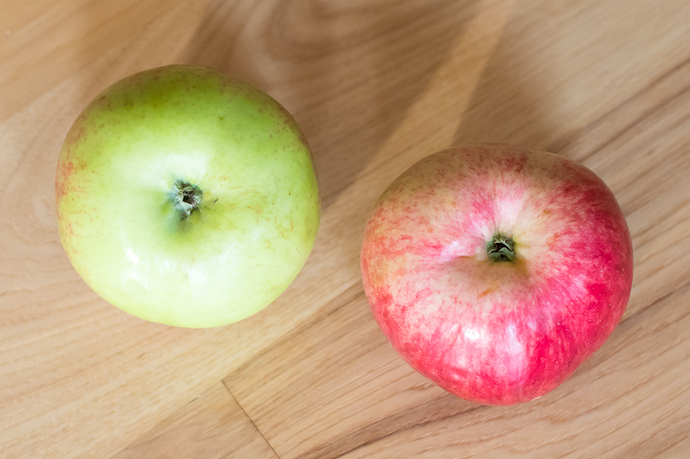 Here is photo of Summer Rambo: 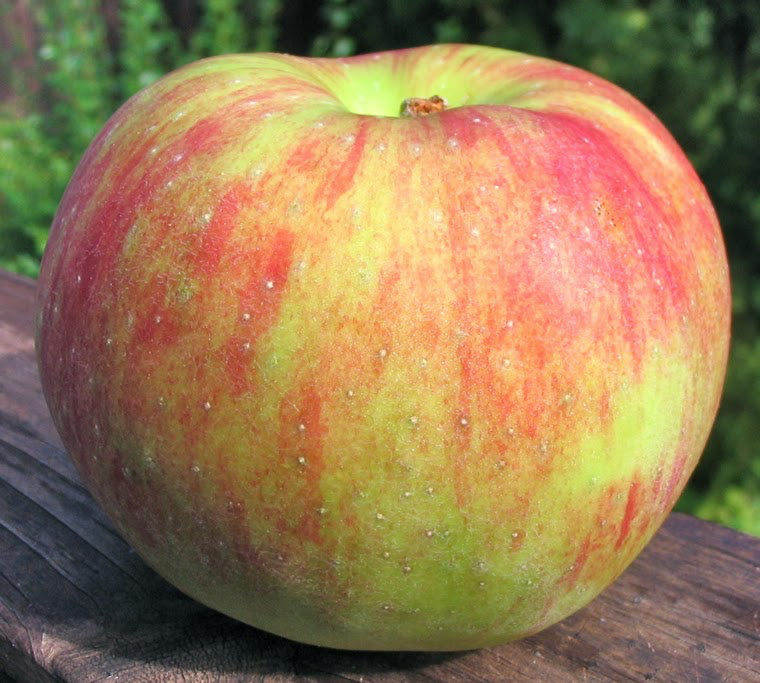 I’m no expert but I’ll guess Cortland. Very White flesh.
I’m also not sure the seeds look like it’s ripe yet.

This may be a clue: lots of people like the taste of Summer Rambo- am told it’s sweet/tart so if your apple only tastes so-so, it probably isn’t SR.

Could be “smsmith”………My Anoka never has apples that big (compared to the quarter) but the so-so taste and the striping and the first to ripen all sound familiar. My Anoka were all 15,000 golf ball sized (I exaggerate as I never counted them). I rather like them…better than most apples in June in Kentukcky.

We had an Anoka when I was a kid in south central WI. I didn’t much care for them but they did make ok pies and sauce. Those apples weren’t huge, but I’d guess they averaged 2.5" or so.

Years ago I tasted Stark Earliblaze. Very early ripening but quite tart for me.
Just a guess since I no longer see Earliblaze sold anymore.

It is a little early for Beacon but wondering if that is a possibility too since Beacon was quite popular in Minnesota, western WI and Northern WI 30 years ago.

It does look like Duchess, but I think it’s too early. Anoka has Duchess as a parent

Thanks for all the responses!

I should clarify a little bit about the flavor – when I first tried them I was trying the ones that were clearly ripe (the tree was dropping apples) and they weren’t bad or anything, they just just a little sweet and more mushy than I would prefer. They were clearly ripe.

But then when I picked the apples some of the apples weren’t fully ripe yet and so had the sweet/tart thing going on that was pretty pleasant, and the flesh was crisp. So I enjoyed the apple a lot more that way, and I’m guessing that most people would also pick the apple a little early to get that. It seems like the window between tart and mushy is probably pretty small.

It definitely looks like that above picture of Summer Rambo but based on the apple ripening chart I found, which is several zones south of us, Summer Rambo ripens several weeks later than Zestar, and our Zestars definitely aren’t ripe yet so that leads me to think it is probably not Summer Rambo if that chart is accurate.

I know it is not Cortland as we have several of those and those are still small and don’t ripen here until October.

I can’t really find much info on Anoka – does anyone know when it ripens? It doesn’t seem to be very common. Do you think Anoka ripens earlier than Duchess?

I think Duchess of Oldenburg seems like a good possibility. According to that apple ripening chart it is one of the earliest ripening varieties, at least a week before Zestar. The picture on this page looks a lot like mine.

He had several trees that died, though, so I can’t really know for sure if this tree is a Duchess because one of the ones that died could have been Duchess.

Good detective work! My father’s favorite apple was Dutchess too so I planted it on a farm I used to have. He grew up on a 160 acre homestead near Manchester, Iowa. Dutchess, along with lots of others, got bad blight so I grafted it to something else.

Yes, Anoka ripens ahead of Duchess. At least that was how it worked in southcentral WI. Our Anoka started to ripen in early August and peak would be about now.

Hmm, that sounds like a real possibility then too. I wonder how I could figure out the difference between Anoka and Duchess.

If this is useful for anyone stumbling upon this thread later, I thought I would post an update that I’m pretty sure I’ve figured out what apple this is. I find a rough map my Grandpa had drawn of his orchard and I’m 99% sure the mystery tree is labeled “Vista Bella”. After looking that one up online it fits pretty well the apple I picked in looks and this sounds like just about the earliest apple there is. I think I picked it too late as it sounds like they are best picked when a little tart but they soften extremely quickly. Next year I’ll have to start checking every day around the end of July.