I just ran across a statement about Li that had been in the back of my head for some time but I couldn’t remember the source. Today I ran across it again in Richard Ashton’s Jujube book - “Every province in China that grows jujubes has a variety named Li.” Shanxi Li is simply the Li from Shanxi province which is west/southwest of Beijing. It’s a fairly large province with cold hardiness zones extending from of 5 - 7. It looks like we have at least 4 distinct Li type fruits in the US - Li, Shanxi Li, Li2 and Redlands #4. The potential certainly exists for all of these to be misidentified or confused. I have two Shanxi Li plants from different sources and they are not identical. Neither of them has the wonderful fruit that others have praised.

One of the other interesting points Ashton makes concerns the Yu variety. Roger Meyer could never get Yu to fruit nor can I. It has numerous flowers every year which are significantly smaller than typical jujube flowers so it seems to be from a different genetic background than the other jujubes I grow (I do have one seedling jujube with flowers almost as small as Yu but that tree does set fruit). But Ashton reports that Yu fruited in Chico California, and says it is the same as Silverhill and Tigertooth. I have Silverhill and Yu is definitely different. Roger had both Silverhill and Tigertooth and they both fruited for him so they were clearly different than the Yu he had. Has anyone been able to get fruit from Yu?

never had the chance to get one (or any of his other imports)from Roger, we called Shirley a couple of times but she didn’t have a clue, and didn’t want to sound like i was some self-serving vulture ‘hovering over the spoils’ since that was at the time Mr Meyer was in the hospital and when he just passed away

seems like Yu is one more variety that got lost in the shuffle. Nurseries probably got confused about which-is-what with all those chinese names, and inadvertent switch-a-roos. Mr. Ashton either for the discrepancies, since he may have been a victim himself of anecdotal reports.

speaking for our juju experience here-- we have already given up on being sticklers about names and aliases, and just hoard as many varieties as we can

especially those damned norris dam jujus-- many of those are tough to tell apart! Still hoping though that some will improve in taste over the years.

that is, if they are even different from one another…yikes!

at this point it all boils down to taste preference, quality of fruits in our locale, and the productivity here.
used to hold a grudge about people saying sugar cane is pretty good, but i guess it was just our climate here

I totally agree. I’m just collecting everything I can find and seeing what works best for me. But many people who have a jujube that performs well are assuming that every tree with that name is the same, and it won’t be, either because the fruit is going to develop differently in different climate, or because it’s really a different cultivar. But I’d still like to know why Yu won’t set fruit.

could wager you may well be the only one who has yu, and good for you!

your post actually portends plenty of pm’s from folks with juju hoard-itis.

really curious, how many cultivars have you collected, more or less?

At least 40, maybe as many as 50. I do have Mu also. I have Porterfield and I get the impression not many have that one either. I don’t have all of Roger’s varieties though because he and I had a talk a long time ago and he listed the ones that he didn’t think were worthwhile. In retrospect I should have tried everything anyway. And I forgot that Ashton lists one other LI type fruit - Round Silverhill.

we have about the same, over the years, but your collection seems to be more eclectic. Have been visiting plenty of juju threads, not just this, but you’re the first one to mention yu.

we had mu and maybe still have it, but it wasn’t outstanding. Btw, did you mean porterville?

porterville looks ugly, but taste is pretty good, unfortunately seems unproductive in vegas. Is/was your porterville a heavy-bearer there?

Porterville is very unproductive. And the fruit ripening is spaced out over a long period of time, so I might have one ripe fruit on Monday, one more on Thursday and then another one on Sunday, if that many. I really do like the fruit though because it has that nice sweet sour balance and the fruit is large while the seed is tiny.

kind of like chico in sweet-sour balance.
and really disappointing to hear it is also unproductive in california. I mean, if a juju is unproductive there then most certainly it does not bode well for folks in east coast. Chico, at least, is quite productive in the southwest(but reportedly stubborn in more humid/colder east)

I have two Shanxi Li plants from different sources and they are not identical. Neither of them has the wonderful fruit that others have praised.

I have two different Shanxi Li as well and neither was great. But, it was the first year for both of them, so they definitely deserve more time. One from Trees of Antiquity (a couple first year trees, one of which had 1 fruit) and a 2nd year graft from Bob Hawkins. They seemed a bit different, as the fruits on the graft were narrower, than the one from ToA. Neither had an especially crunchy texture or were super large, though the ToA one was bigger than most and could make bigger fruit when it settles down. 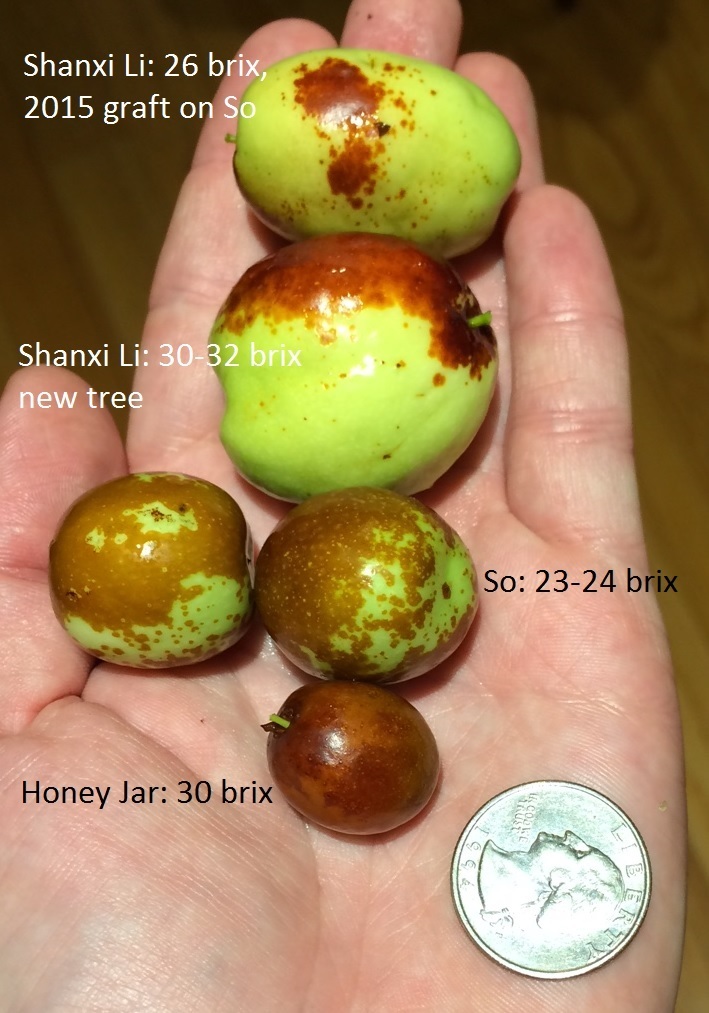 Earlier tonight, I picked the last Honey Jar, and the last Shanxi Li from both trees. I think I waited a bit too long on the Honey Jar, as it wasn’t as crisp as I’d like. It was still much better in texture than both Shanxi Li, even though they...

If anyone has a better Shanxi Li source, I’d be open to adding another.

used to hold a grudge about people saying sugar cane is pretty good, but i guess it was just our climate here

I might be one of those people- for me, it’s been almost as good as Honey Jar, though not as instantly productive.

it’s been almost as good as Honey Jar,

that is good to know, since SC is a heavy bearer and early, which would be the most ideal for your locale. Years ago when first received my half dozen SC’s from burntridge, i felt like calling them about the accuracy of their juju labels, their online descriptions, and/or their actual specimens

Bob, I’m glad the wood took. My Shanxi Li was from Roger Meyer. Fruit is a little larger than my standard Li’s, taste is good but not as good as Li. I just planted another Shanxi Li from L E Cook this past spring, hopefully I’ll have another datapoint in 7-8 months.

I have Li’s from 3 sources; Roger Meyer, L E Cook, & Edible Landscaping; fruit is the same from all 3.

There seems to be 2 different descriptions re Lang’s re size; I have langs from Roger Meyer & Edible Landscaping, both are the same & are the smaller type of lang; some literature describes them as quite large.

No experience with Yu, sounds like one I’ll let others play with!

same & are the smaller type of lang; some literature describes them as quite large.

there are severa types of lang as well, namely polenski, thornless, hegard, junzao, etc. At least one of the RT’s also look like small langs. Tastes like it too.
the bigger langs may get as big as li, btw.

Yes, I think I got a couple of Shanxi grafts to take. Only one had fruit this year, but hopefully both will have some next year. Thanks for the wood!

Fruit is a little larger than my standard Li’s, taste is good but not as good as Li.

My understanding was that Li are pretty big, at least compared to So, Honey Jar, Sugar Cane, etc. These Shanxi were only slightly bigger than So, but not by as much as I would expect (there are is a pic in the above link). Maybe they will be bigger next year.

I suppose it is also possible that I messed up with the grafts. That year, I was grafted ~20 varieties, spread over 80-100 grafts. Regrettably a lot were lost when none of the 50 rootstocks lived- a few leafed out, but none very strongly. At least, AFAIK none lived- I did give some out and it is possible that someone took better care of them than me.

No experience with Yu, sounds like one I’ll let others play with!

Same for me- from the description, it makes GA866 seem like a heavy producer!

Years ago when first received my half dozen SC’s from burntridge, i felt like calling them about the accuracy of their juju labels, their online descriptions, and/or their actual specimens

Is it a texture issue when you grow SC? Maybe it needs more in-ground moisture to stay crisp…

Li’s roughly twice the size of C So, I bet next year your Shanxi’s are much larger

Is it a texture issue when you grow SC? Maybe it needs more in-ground moisture to stay crisp…

i wish it was just watering issue, but the texture and juiciness were fine with watering(or even with little watering), but the taste is really off, with a slight bitter taste. Have the same problem with contorted’s.Honey jar is immune to our summers

Last year Sugar Cane was exceptional from start to finish. It was one of my top 3 jujubes last year. This year it was not very good early, but by the end of the season it was pretty good. I’m pretty sure it’s not a watering issue. I suspect it’s a heat units issue.

i agree, as it seems to be the only factor that other posters here don’t have.

This thread gave me the nudge to pick up a few more jujubes from another vendor- just to make sure I get all the varieties…And while I’m there, I may as well pick up another Honey Jar…

I thought I was about done ordering after last year’s 15 trees, but I’ve ordered 13 already this year and may add another 1-2 when JFaE updates their inventory in the spring.