If a tree falls in the woods

Yes it makes a noise, a tremendous noise! Especially if it’s an American Beech which is quite tall and about 3.5’ diameter (~11’ circumference). And if it’s about 300’ from your bedroom window and decides to snap just as you’re falling asleep. 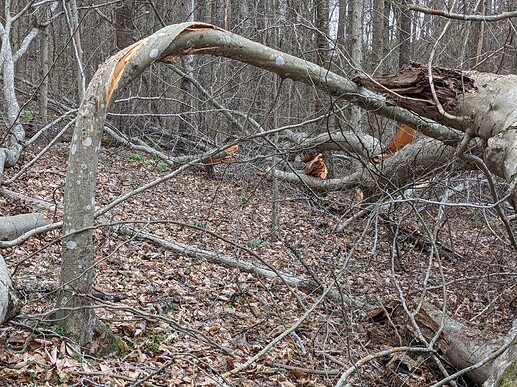 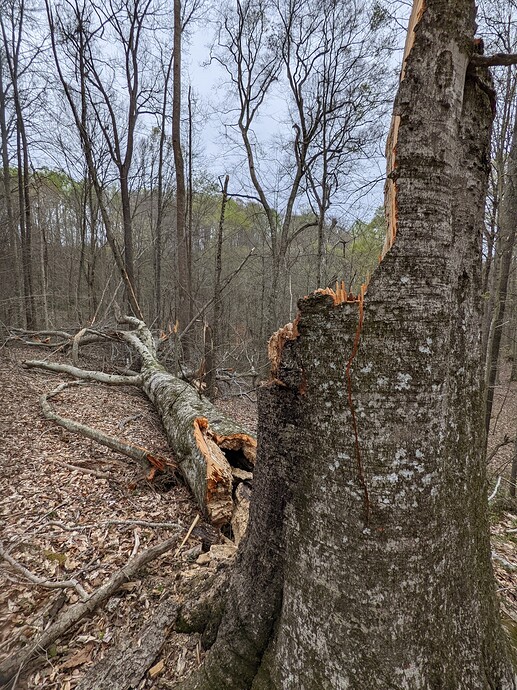 Oh and I’d not been in this particular section of woods for months and just happened to walk through here earlier the same day… Walked up to this tree and thought to myself the rotten spot in the side of it was larger than I remembered. It fell on top of the spot I was standing perhaps 6 hours prior. Yikes!

I don’t see the blistered bark of Beech Bark disease, is it in your area yet? Here in upstate NY our American Beech are all infected. The trees only make it to about 6-8" diameter if they’re lucky, before the fungus kills them. Since they can spread by root, once the tree is stressed they sprout multiple root suckers and they just keep repeating the cycle, grow to 8", die, sprout, grow, die… They actually are a nuisance now since they’re unable to grow into useful lumber and the root suckers choke out other native trees. Really sad considering the monstrous size they used to grow to.

I was over at my in-laws a couple weeks ago chatting, we were outside and I was about to leave, then heard a big boom. My bro in law said wow that tree just fell over the driveway. We went down to investigate and it had fallen over the driveway and took our part of their split rail fence. He cut it up with his chainsaw and we tossed it into the creek. Just glad I wasn’t driving down the driveway when it happened.

We have frequent tree falls over the roads here. Some folks just haul their chainsaw in their vehicles just in case they have to clear the road.

Bigger than that one…some 30 years cut a beech to get the honey and bees living inside it.

Lots of tree species are suffering in this part of the country but I’m unaware of that particular one being here. Probably only a matter of time until it is though…