Incandescent (non-LED) Christmas lights not as hot as I remember

Since temps predicted to drop to low 20’s this week I pulled out Christmas lights to wrap outdoor protected citrus. Checking this am I ONLY gained about 3 F over ambient air temp. Hmmm, didn’t seem like that much of an improvement! The lights are a hodgepodge of varieties, some globe, some teardrop, all with filaments-i.e.no LEDs.
The oldest lights 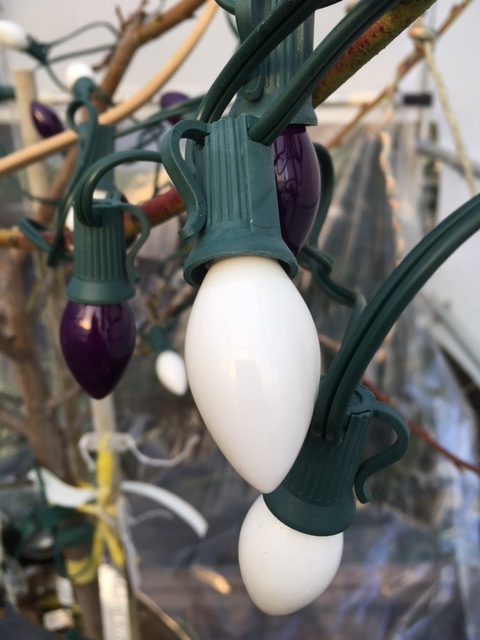 got the hottest, like the ones of my youth.
The newer ones with filaments 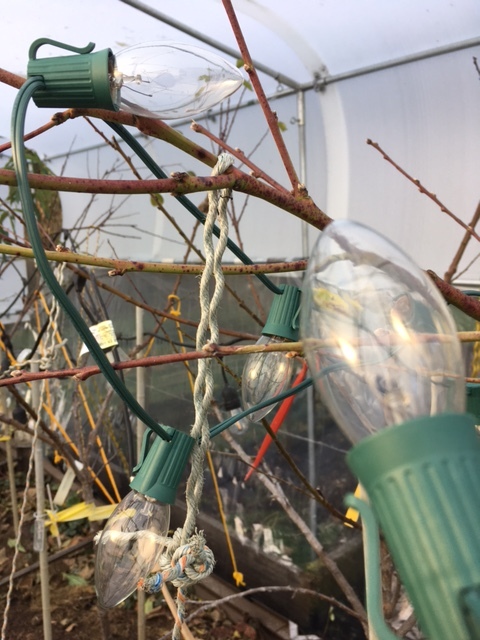 are only warmish. (Note these pix are not of citrus but other plants I am protecting.)

I understand, and totally agree with, the reasoning for making a switch to non-heat emitting lights. None of my house lights are incandescent… but I have saved a few oldsters from the past.

It doesn’t take much to heat a sensitive plant a few degrees.

Do you have the original boxes or info for each light string that stated the wattage of the string?

The newer lights (clear ones with filament) are 2.4 watts (0.02 amps) and they only feel slightly warm when on. The older lights (white/purple) have lost their tag and are definitely too hot to hold for more than a few sec. It occurred to me that maybe these new filament lights are made to resemble traditional incandescent bulbs just for looks. Turns out that’s it!!
from Wikipedia:
“An LED filament light bulb is an LED lamp which is designed to resemble a traditional incandescent light bulb with visible filaments for aesthetic and light distribution purposes, but with the high efficiency of light-emitting diodes (LEDs). It produces its light using LED filaments , which are series-connected strings of diodes that resemble in appearance the filaments of incandescent light bulbs. They are direct replacements for conventional clear (or frosted) incandescent bulbs, as they are made with the same envelope shapes, the same bases that fit the same sockets, and work at the same supply voltage. They may be used for their appearance, similar when lit to a clear incandescent bulb, or for their wide angle of light distribution, typically 300°.”

Thanks. I have a 25 watt reptile heat cable which should be good.

The 2.4 watts is likely the electrical power used for the entire LED string.
Old true-filament bulbs were several watts per bulb; over 100 watts per string.

Wow-quite a difference! . No wonder Christmas trees of yore would shed their needles covered with 2 vintage strings!