The more dwarfing rootstocks are also the most precocious (generally speaking). Unfortunately they also tend not to anchor down trees particularly well.

If one wanted a tree that would grow quickly to its full size, start fruiting in only a few years, be well-anchored, and only get to about 7-8 feet tall (some size restriction via pruning and / or container growing would b possible), would an interstem rootstock configuration be a good way to go?

Would anyone care to share their insight into this issue?

I’m curious if anyone has experience planting the interstem both above and below ground surface. What are the observed differences?

I sounds like a good idea but I haven’t heard of actual results that verify the promise. Hasn’t caught on commercially but that could be the understandably higher cost of trees. Nice to play with but don’t assume you get the best of everything with this technique. Some of the new rootstocks are hard to beat. And I’ve had no complaints with M9 and M26 over the past 40 yrs. Scott pointed out once that my experience doesn’t span more than 11 yrs with any one tree. I’ve got a couple trees on those roots now for that long and I love the results.

The ones you are considering look good to me. I have a variety of combinations but the M111/bud9 is the one that I’m going forward with. The interstem length appears to help determine the growth rate. Good luck, Bill

I think interstems offer some definitely possible benefits if you are trying to overcome a particular issue that a dwarf rootstock present. In my particular case (clay and sometimes wet springs and dry hot summers) it seems like a EMLA111 understock is a great starting place just for the sake of keeping the tree alive. But since I’m on a very small lot (at least compared to folks on this forum), I want small trees so I can fit in the variety of edible crabapples I want to try. So I decided to graft them myself and use dwarf roots as interstems with the EMLA111 base. I’m actually hoping just to use the interstem trees, but since I needed the dwarf stock anyway and was left with a usable root once I chopped off the piece for the interstem I’ve grafted both. So for Chestnut Crab for instance, I bench grafted a EMLA27, a Bud9, a EMLA27/EMLA111 and a Bud9/EMLA111. With the less vigorous Centennial and Callaway crabs, I’m grafting 2x each of Bud 9 and Bud9/EMLA111. If these take, I won’t hold onto all of them for long, but over at least the first year before they go in their final homes it will be interesting to see exactly how vigor varies for the different combinations. The “regular” trees are just a bonus for me and a source of bud wood if the scions on top of my interstems don’t take.

Here is a tub of my grafts finishing up callousing for a few weeks in my unheated crawlspace. They’ll be planted in a nursery area this weekend. 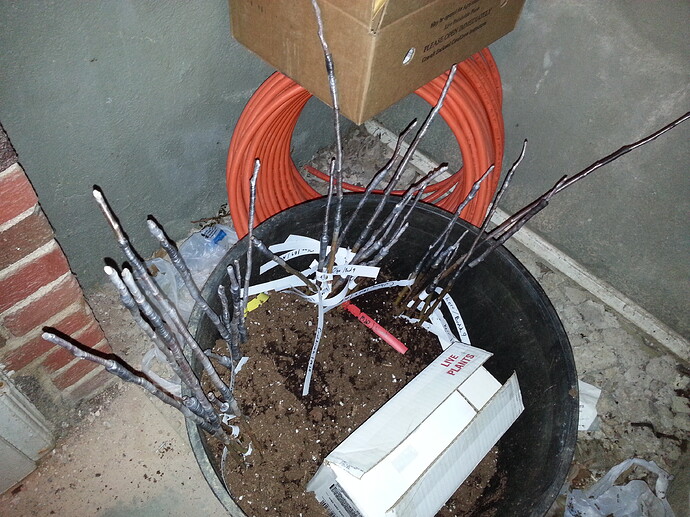 But I definitely do view this as pretty much an experiment. It really doesn’t seem like there is enough research or experience out there to even clearly define what size trees to expect. And then there is the variable of planting the root/interstem graft above or below the soil line…

Bill, you said “the interstem length appears to help determine the growth rate.”

Could you elaborate on this?

Fruitnut said “it sounds like a good idea but I haven’t heard of actual results that verify the promise.”

Does anyone here have direct experience with interstems that they can share with us?

“Hasn’t caught on commercially but that could be the understandably higher cost of trees.”

The additional cost could be an important barrier for commercial growers. When you’re selling at wholesale there’s a difference in the economics versus a backyard grower who is replacing what they would otherwise buy at retail prices (of course one’s homegrown fruit may also taste better and be more nutritious than what comes from the grocery store, so that also factors in).

“Nice to play with but don’t assume you get the best of everything with this technique. Some of the new rootstocks are hard to beat.”

“And I’ve had no complaints with M9 and M26 over the past 40 yrs. Scott pointed out once that my experience doesn’t span more than 11 yrs with any one tree. I’ve got a couple trees on those roots now for that long and I love the results.”

One concern with the M9 and M26 was staking requirements, although growing in a 20 gallon container in a reasonably sheltered location may change things vis-a-vis staking and it might also cause a tree on MM111 to need staking simply because of the possibility of the pot falling over if the tree acts like a sail in the wind. Any comments / insight here?

Wind is a huge issue in pots not leaning. Don’t plant MM111 in a pot. To me that’s pointless. Get one of the dwarfing, fire blight, and woolly aphid resistant Geneva roots. Much better than 111.

Bill, you said “the interstem length appears to help determine the growth rate.”

Could you elaborate on this?

As you probably already know there is not much detailed information on interstems on the web. Although I have been tinkering with interstems a few years now most of what I’m saying is opinions rather than facts. From the little information that I have the maximum dwarfing comes from insterstems 14-16”. Other factors most likely play into the scenario such as rootstock and scion vigor. Good luck, Bill

The reason I’m asking is that something might be available on MM111 (but not on another rootstock) and of a size such that it already has a good headstart on getting to fruiting size but will likely still fit in a 25 or 30 gallon pot (e.g., close to the maximum size for which the tree would still be comfortable in the pot). In that case, it could be obtained and grown in the pot and another tree started from scionwood on a Geneva rootstock.

Presumably the tree on MM111 would quite growing when it hit the maximum size for the pot but would still eventually produce fruit (and would likely be more precocious than if it were planted in the ground) - IOW, forced dwarfing due to size limitation by container.

For some cultivars, lack of rootstock choice is a problem. Henry Fields / Gurney’s apparently has a deal with PRI (the Co-op apple people) for near-exclusive (I say near-exclusive because Cummins Nursery has been allowed to sell a small number to the public, for example) on Pixie Crunch and Sundance. HF / G has them as L’il Big trees (M27) and standards (MM111), but nothing else that I know of.

Which brings up another question: Does anyone know if PRI will allow individuals to grow more of these and other patented varieties for personal use, provided one sends them the royalty for each tree? (From the Cummins Nursery site, I think the royalties on patented varieties are in the range of a dollar or two per tree.)

I’d be concerned that trees on 111 even in pots might take a long time to bear. I know a pot will dwarf 111 but don’t know it it will bear at a young age. On a dwarf stock early bearing is assured.

I doubt PRI will allow propagation even if you send them $20 per tree. They are not likely geared to small growers and small orders. If you want a license for 10,000 trees you could probably get something done but not 5 or even 50. I’ve tried to do that with DWN. Ask for 10 trees each of 30 varieties. The CEO didn’t even return my email and I had someone at DWN on my side and saying it would work. Just too much trouble.

I purchased a few G-11/M-111 interstem trees from Cummins that are now in their 2nd leaf. These trees are noticeably larger than the trees on G-11 I got at the same time, even though I buried half of the interstem. I would like to hear others input, but It seems like these interstem types will need at least 6-7 feet of in row spacing to avoid lots of pruning, at least here in the south where the trees grow pretty fast. I am not sure if you could classify them as dwarf trees.

The guy (Sam Benowitz) from Raintree Nursery in Morton WA is a big advocate of interstems. They sell to Seattle a lot. It’s a big city and there are a lot of rich people with restrictions, like my brother in law. He used to work like 75 hours a week and the trees couldn’t be more than 8? feet tall. He couldn’t get out to the yard much to water it in the summer. I figure the interstem of a dwarf tree on a regular or semidwarf rootstock makes sense for him.
John S
PDX OR

I was curious how these g11/m111 interstem trees are doing now? How do they produce? Any issues? Suckering? Are they self supporting? Would you recommend them?

One data point: I have a G11/MM111 Rubinette from Cummins that’s starting its seventh season here. I buried about half of the interstem, and a sizeable knot formed at ground level. I get a bit of suckering from the rootstock, but nothing problematic. The tree is about five feet tall and has been holding at that height with very little pruning for several years. It began bearing pretty quickly and has provided heavy crops most years. It’s in a windy area with wet winter/spring and dry summer/fall, in clay-heavy soil, and it’s done just fine. I supported it for a couple of years after planting, but it’s well-rooted enough that it hasn’t required any support since.

My only issue with it, really, is that it may be too small. Rubinette is such a good apple that I’d like to have bigger crops. Last season, I frame-grafted a Cornish Gilliflower on MM111 over to Rubinette to address that issue.

Do you remember- how long was the interstem? I am impressed by small size of the tree. I am curious how these work, I plan on trying some on various small roots eventually. I would love a small tree that holds up to wind.

I don’t have the vast experience that you do, but I prefer B9 and B118 to M9 and M111.
More drought and more freeze tolerant. And the B118 definitely more precocious than M111
(In a warm climate Budagovsky might not be best.)

Do you remember- how long was the interstem?

Hard to be sure now, but I think that it must have been three or four inches.

I grafted a number of interstem (Apple) trees last year. From research it seemed like the dwarfing effect was diminished with shorter lengths. I desired the full effect (BUD9 and G41 as interstem piece, hoping for 8 to 10’ max trees) so used a 12" interstem length. When planting them out this fall I buried the bottom graft union and 3 to 4" of the interstem section hoping it would root as well. I used M111 as the “root” part.

I believe I’ve read that around 8" (or more) achieves the full dwarfing effect and I just hedged my bets and went with a bit longer to be certain.