Here’s some more details about the irrigation/fertigation system I’m installing. Actually, re-installing as I did this once before at my previous home

My water pressure from the street is low by some standards, a scant 55 Lbs. So I can’t effectively water a dozen trees at a time with a single valve. Consequently I have a large number of valves.

Inside my home are 3 Rainbird SST900i controllers with a 4th on the way. The control wires from these controllers will feed out to the yard through a conduit I installed prior to pouring a new back patio. Most of the control wires go to various irrigation substations throughout the yard, but the master control wires go to a fertigation station where I’ll stock 3 different fertilizer solutions to meet the need of 3 generalized plant groups in the yard. At the moment there is only one fertigation tank installed and it feeds a hose that I use for hand watering. 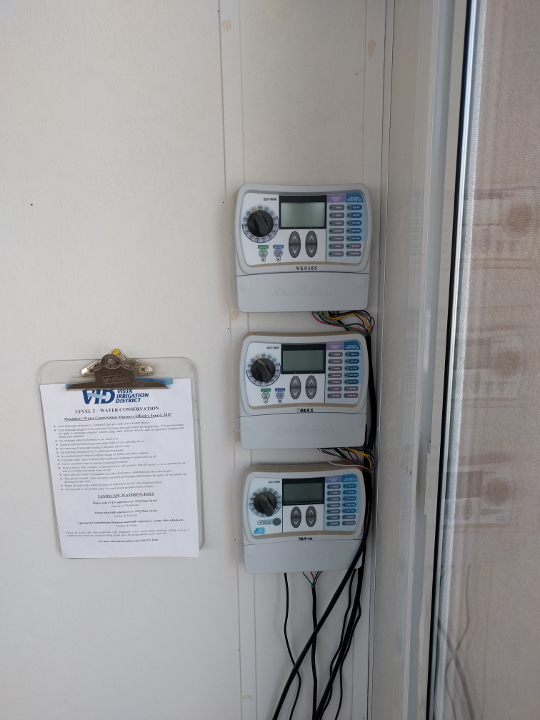 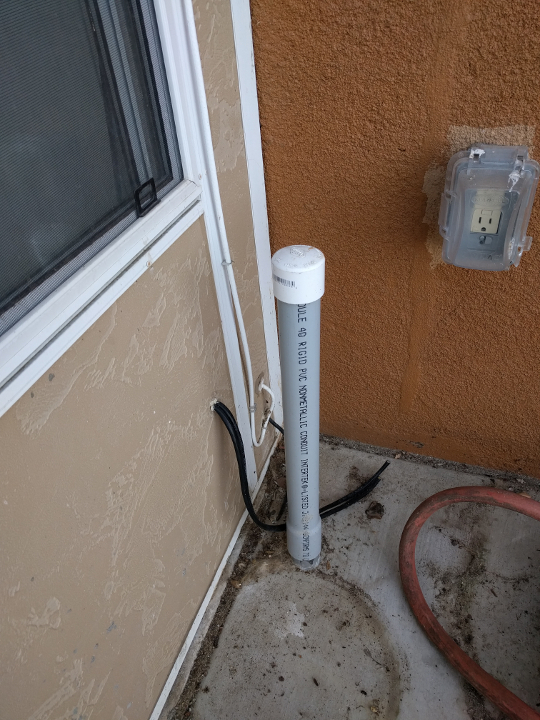 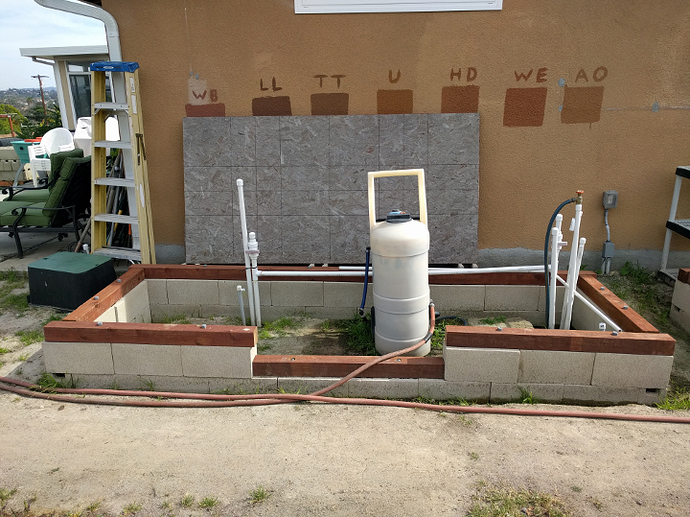 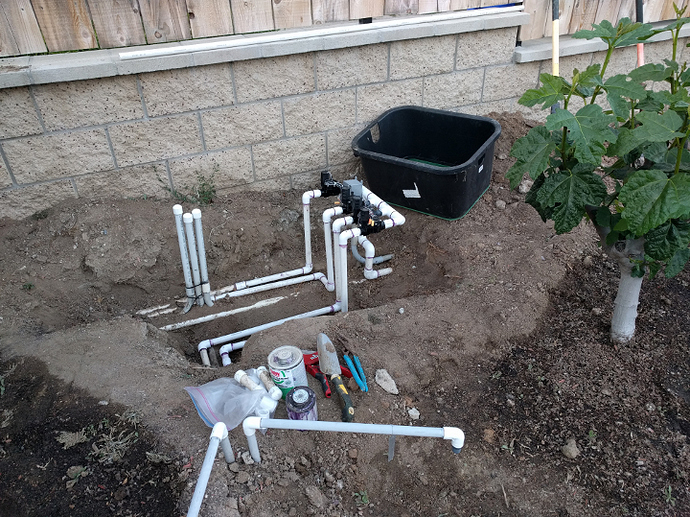 Richard, that’s some fairly good looking pipe work, plastic or not, and even though ultimately buried you (or someone) did a pretty decent job. Why is the building (beginnings of one) not have a concrete or at least leveled floor. Is that a project for a later date?
What does all the brown squares WB, LL, TT…etc mean? Why are they all slightly different shades of brown? Why are the concrete block not mortared? Sorry…when I see things I have to ask.
I went to your website and you know a lot about things that would be very interesting to a lot of different growers. One type of grower immediately comes to my mind and I wonder if you have made any effort to market in that direction? I bet there are scores of shows etc in Colorado.
Does the downward pointed nozzle simply spray out water / nutrients to the water ring formed around the trees / plants?
Sorry for so damn many questions.

Nice work! Makes me glad I live where it rains enough, though!

Why is the building (beginnings of one) not have a concrete or at least leveled floor.

The irrigation shed will have a gravel floor after I mortar the blocks together.

What does all the brown squares WB, LL, TT…etc mean?

I was choosing exterior colors for my home - settled on AO (Almost Ochre).

I wonder if you have made any effort to market in that direction?

I’m currently selling off my remaining inventory and plan to fully retire in June.

Does the downward pointed nozzle simply spray out water / nutrients to the water ring formed around the trees / plants?

The “nozzle” is just a short piece of 1/2" pipe with plastic insert (like those found in nozzles) to keep insects from crawling up the pipes. I chose this approach to maximize flow.

Good choice…I’d have went AO also, however WE looks nice too.
Cool set-up!

I’ve painted AO on the front and rear of my house. Photos of it can be seen in this thread.

This morning I buried the pipes and put the cover over the valves. Most people would partially bury those covers, but I find them a convenient way to keep bait stations away from my dog.

The three vertical pipes to the left of the cover are part of my future outdoor lighting system.

In the second photo is a close up of my irrigation spigot parts. 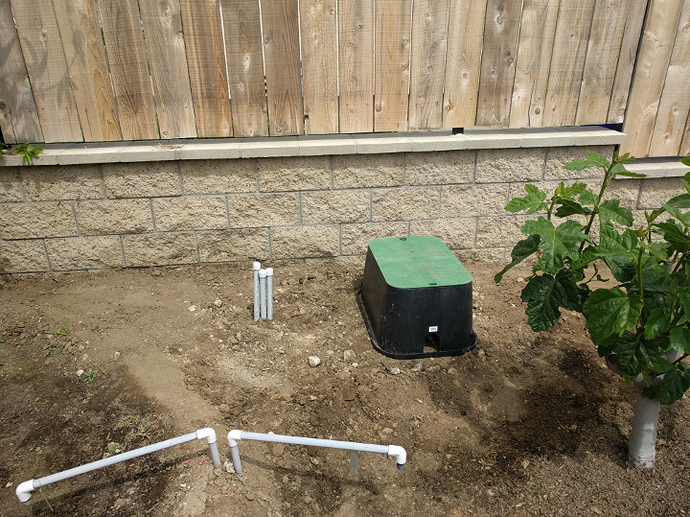 In terms of irrigation routing, I have the main station 1/2 completed and 3 of the substations it serves completed (except for pulling control wire).

This afternoon I began working on a fourth, uncovering the requisite pipes that had been buried during rainfall the last few months. 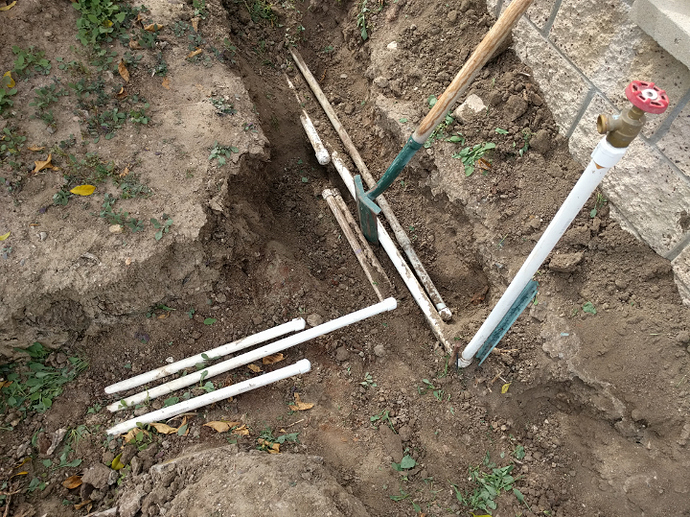 Thanks for sharing Richard. Looks like quite a project! I did not realize one could fertilize through your irrigation system…I always wish I had better irrigation if we are traveling somewhere. I feel inspired by your photos to work on that this summer.

Very nice, Richard, I am very envious. I want to re-do all my irrigation, but most especially to my fruit trees. I want to put in new controllers that I can run with the Rachio app, and I want to put in a fertigation system so I can apply both fertilizer as well as phosphorus acid, due to my issues with phytophthora here. Ugh. Well done, I commend you for doing it right, right out of the box. I inherited my crummy irrigation system, put in by the previous homeowners. So, I’ve got to rehab it all. Not looking forward to that immense project.

Is that a threaded ninety and then a mesh filter screen like the inside of an irrigation head and then a double male fitting to secure the filter? Awsome set up. Really an acomplishment.

Is that a threaded ninety and then a mesh filter screen like the inside of an irrigation head and then a double male fitting to secure the filter?

as well as phosphorus acid, due to my issues with phytophthora here

Initially I used about a 1/2 cup of copper hydroxide (Kocide 3000) per year through the irrigation water and now just a 1/4 cup per year. It really got the anaerobic phytophthora under control.

Thanks for that tip, Richard. It is such a weird, hit and miss issue on my property, but a known issue in our area. In fact, our area was originally an avocado orchard that was not being managed. Many affected trees. So, we’re dealing I think with the aftermath, still. This sounds like a good option as well. I may be asking you later about your fertigation system. I really do want to do this for my fruit trees. Makes taking care of them SO much easier.

a known issue in our area

Yes, the bacteria is a feature of our soils and chaparral flora. In fact the latter also harbors an aerobic bacteria that infects Cereus and Hylocereus, with initial symptoms of red pimples on the pods. A winter and summer foliar dose of copper will also control that. Further, insuring that electrolytic micronutrients are always in your fertilizer regime will also help most plants deal with these issues. I got my lesson in this from Alan Miner about 1/4 century ago at what was then Western Farm Service. I asked him how to deal with the constant blight-like blemishes on my grape leaves. His two word answer: “Check Zinc.”

Great info, Richard. I had one of our larger avocado growers up in Fallbrook give me that low down on our soils when I first moved back to our area in 2009. I was really surprised that this is an “endemic issue”. He told me all the avocado growers and what was left of the citrus growers ran either Kocide or AgriFos through their fertigation systems regularly. They just treat it prophylactically as it is a “known issue”. I was kind of surprised. I don’t remember having this issue in Orange County, but then, I wasn’t probably paying attention as closely as I am, now. Very good to know. 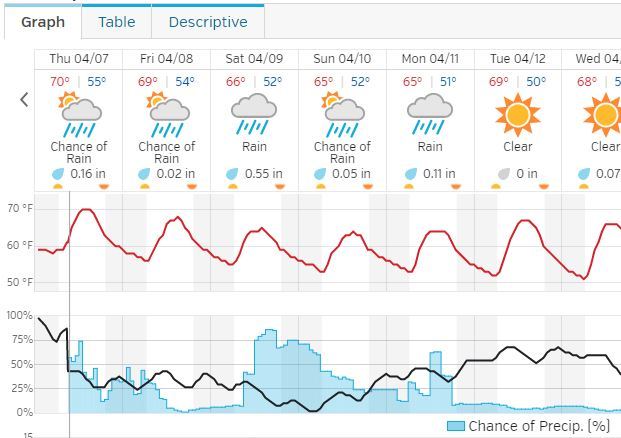 Yes, yes, yes!!! YES. We have rain in our forecast and for a while. Happy for small miracles.

Now I’m back on this task. Today I configured control wire conduit for two irrigation valve substations that I’m installing to the left of my Kei Apple. 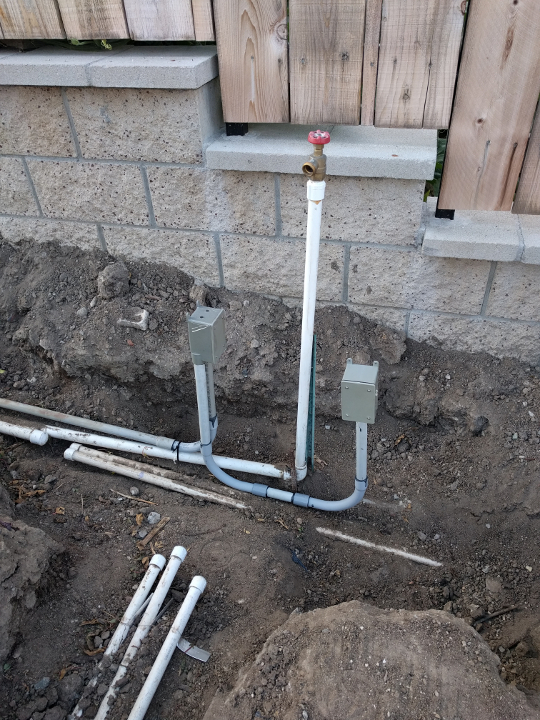 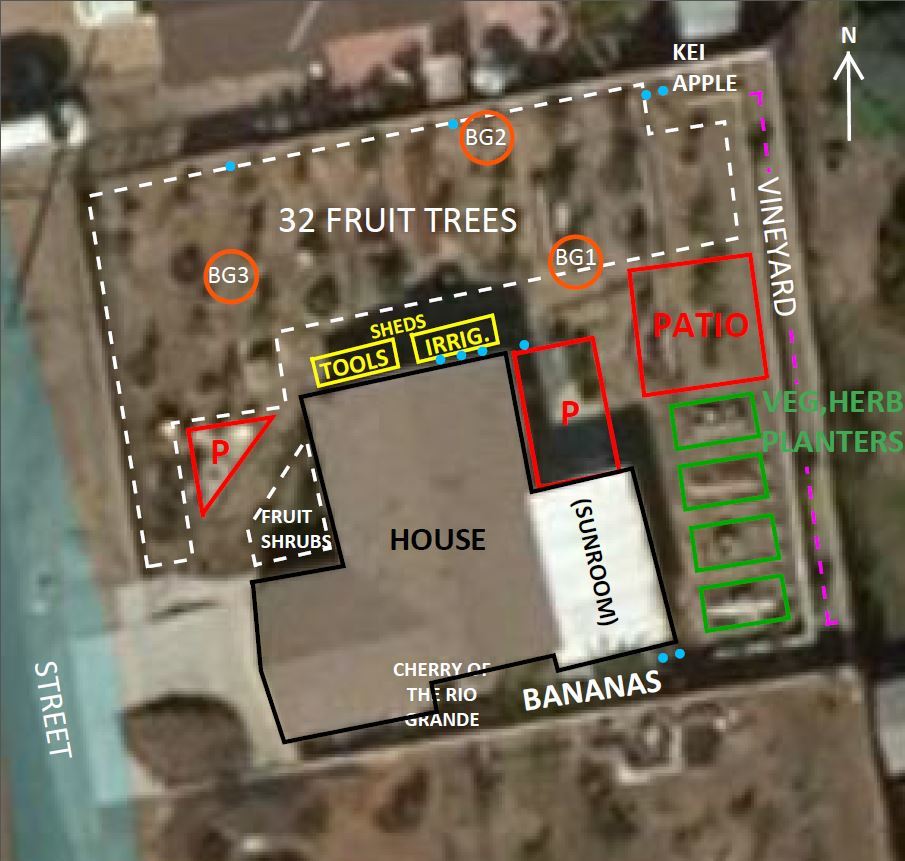 After lots of parts, teflon tape, pipe cutting, purple primer, and glue I managed to finish the lefthand portion of the valve substation 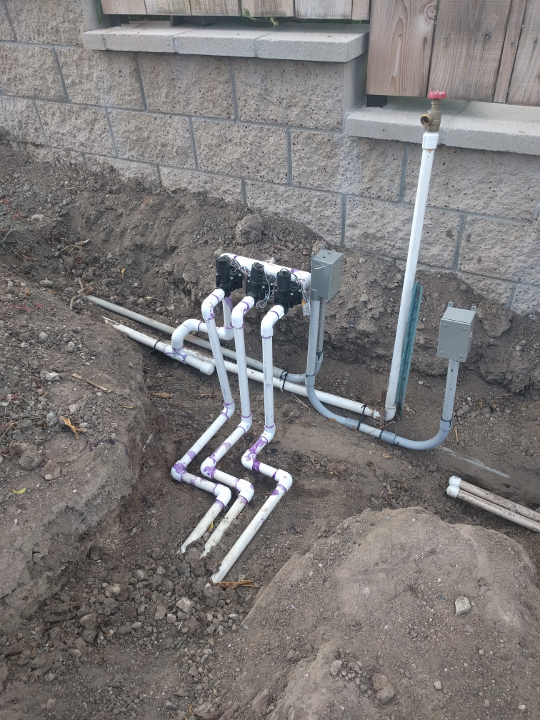