Is it worth it to multi-graft pawpaw trees?

My friend recently really got into pawpaws and asked me about this but i wasnt sure how to answer since I haven’t seen anyone really multi-graft pawpaws.
So I was curious if anyone grafts multiple varieties of pawpaw on one tree.
I’ve never seen more than 1 pawpaw graft on a pawpaw seedling (low on the bottom of the rootstock so it becomes the main ‘leader’ and doesn’t break/snap off) so thought I’d ask the community here.

I thought usually you graft a good variety right on top of crappy wild seedling.
So you have one ‘central leader’ good-variety, like Overleese, going up vertically and its long fruiting horizontal branches reaching outwards (well reaching outwards in a sunny location vs the tall thin ones i see in the wild). I thought maybe cause the horizontal branches get so heavy and may break that people dont bother grafting onto the side branches with other varieties.

Thanks for any thoughts on multi-grafting pawpaws.
-Ari

I’ve done it. Grafted branches IIRC tending to grow out and die if they didn’t get big enough.

I’ve been planning on mullti-grafting my pawpaw trees. I have three seedlings which I would like to graft onto. As of now, the plan is to graft on to three separate branches – the central leader and the two scaffolds on the sides. Does anyone have a method they think would work best? I’ve never grafted before, but have been looking at doing a whip-and-tongue, assuming the scions are similar size to my branches.

I have heard that a tree at Cricket Hill Gardens has 16 different varieties on it! Here’s what I’m guessing are some of the cultivars: https://www.treepeony.com/collections/landscape-edibles/pawpaw

Have done it. My pawpaws don’t have a ‘central leader’ habit… so I just stick a scion on here and there. I don’t watch them closely… suspect some have done better than others, some have died out completely… but it works OK.

About half of my pawpaws are multi-grafts. One thing I found easy to do was the top-bottom division: lop the central leader off about 5’ high and put a new variety on. The lower limbs of the old variety will keep going. Some others I completely topworked and added several varieties to.

I’ve dealt with the guys at Red Fern Farm and they are very nice people. They sell scion wood of several types of fruits and nuts, including paw paw. Check them out if you are looking for paw paw scions.

This last point pollination may be important for pawpaw , as they recommend 30’ or closer for cross pollination.
Scott is right about grafting on the central leader.

My main reason for not multi grafting is that for the same effort each graft on a seedling is a whole tree , so one tree per graft.
Where as on a multi grafted tree you still just have one tree no mater how many you put on it ,you just have one.

If you are limited for space and want a lot of varietys ,then it would be appropriate

I have seen many trees with multiple grafts. KSU suggests that multiple grafts are difficult to maintain because one usually overtakes the others in vigor. This would require careful pruning to ensure a balance between all grafted cultivars.

Hi Scott
I have a number of pawpaws to graft this spring. I read your Top-bottom technique and am wondering did you use a chip bud or a whip and tongue graft on the top graft? Last year my grafts were done in April when rootstock leaves were about 1” in length, but my success ratio was pretty low, so I am wondering if you recall more details on your graft types and timing?
Dennis

The trunks I was grafting to were 3-4" in diameter so I usually used a bark graft, or perhaps a cleft graft.

@DennisD I feel pawpaws do better when grafting in mid May in zone 7a, so you may have jumped the gun.
Though of course there are myriad variables that impact graft success, not just ambient temp.

I am out of room for more trees so multi grafts are my only option for adding variety.
However, my success so far has been limited (though over a small sample). Many failed outright and the ones that took have not been very vigorous.
I’ve also heard that pawpaws tend to shed grafted branches in favor of other dominant leader/branches.
I’ve also heard lower branches fare worse than others.
Don’t have enough long term experience to know yet.
I know @JustPeachy has at least one productive multi pawpaw.

I’ll vouch for Scott’s method of top/bottom. I’ve had very mixed success topworking lateral or scaffold branches on pawpaws. Cutting off a big chunk of the leader and bark grafting on the leader works like a charm. Captures apical dominance.

Thanks fellows @TrilobaTracker& @hambone for your input! I agree that Scotts method makes sense particularly now that I have your comments. So this year I will limit my grafts to the Top bottom approach and just plan on placing multiple variety trees near enough to each other to promote cross pollination. I’m thinking that about 8’ spacing should be a good spacing but would like to know if you think that’s too close?
Dennis

My franken pawpaws look like Christmas trees with all the little tags attached. It keeps it’s form, as I do not lop off the top and bark graft. It is indistinguishable as a central leader once it’s fully leafed out.

My lower branches are probably 50% grafted. Upper 30% probably. I just harvest scion from them as they grow out and regraft, converting more and more of it over to whatever cultivar is on it. It probably has a few hundred worth of purchased scionwood.

I have a pawpaw with 6 different varieties on it with no issues so far. I’d do it again.

I’m thinking that about 8’ spacing should be a good spacing but would like to know if you think that’s too close?

My pawpaws are 6’ apart and are doing fine.

I grafted about 15 or so varieties to a large(ish) seedling last year. I mostly used leftover scion wood that a friend had. In some cases only a single bud. So I utilized cleft, whip, and chip bud grafts. I grafted high and low on the tree. Maybe 3 varieties failed. I think these are due mostly to normal failure reasons (quality/freshness of scion, graft skill, etc).
I’ve seen decent growth, nothing to write home about. But I also fairly roughly transplanted this tree shortly before grafting.
There are lots of flower buds forming.
Picture is from last year after grafting. 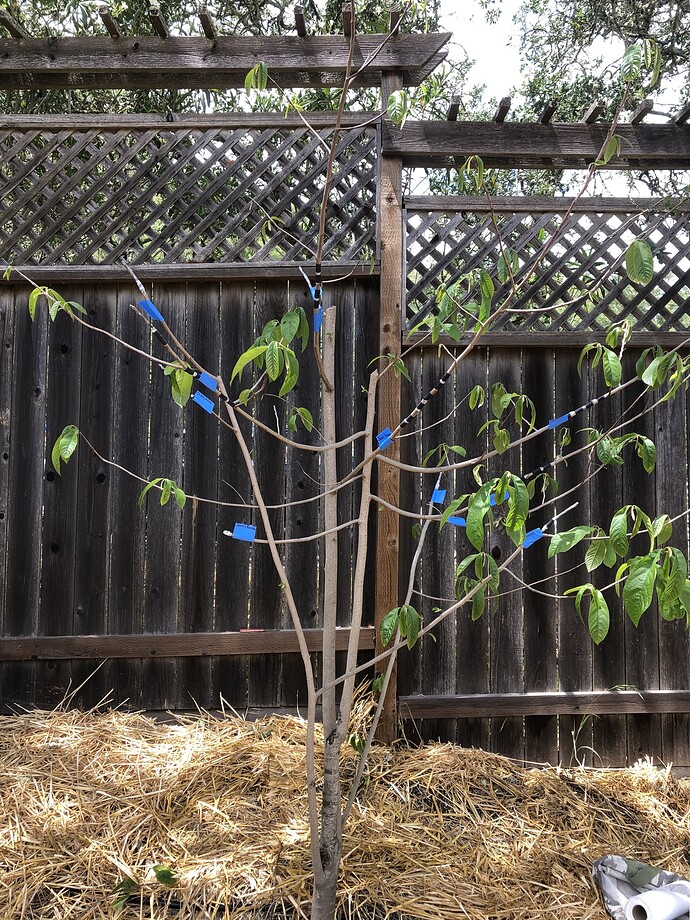 I’m thinking that about 8’ spacing should be a good spacing but would like to know if you think that’s too close?

My pawpaws are 6’ apart and are doing fine.

If I did it over, I’d go with 8 at least, regardless.
More room and better airflow for fungal mitigation.

There is someone close by that did 5-6 feet. They are pruning both trees where the branches face inward toward each other. The idea was to enable pollination, sans human intervention. They purposely want them to grow into each other to some extend.