Is this deer damage?

I’ve noticed that several trees have had their leaves eaten. In most cases, the leaves are in the lower parts of a branch (not at the tips), though some cases, the part eaten was still reasonably high (~5’). Only 10%, if that of the trees have been snacked on. I am trying to figure out if it was a bug that I need to spray for, something like the gooseberry sawfly which was really wacking my gooseberries, until I kept them in check last year with Spinosad. Or if it is a roving deer which wandered through, sampling the occasional tree. There isn’t one spot which was mostly hit- it is all spread out. Also, the impacted trees are Asian and Euro plums, and Asian and Euro pears- quite a variety for one bug to eat… 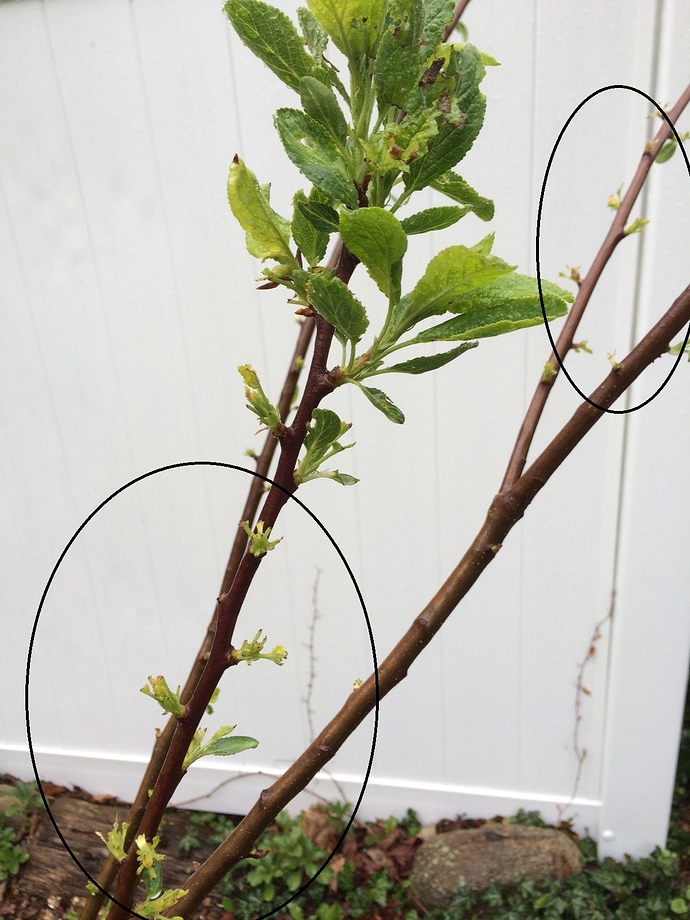 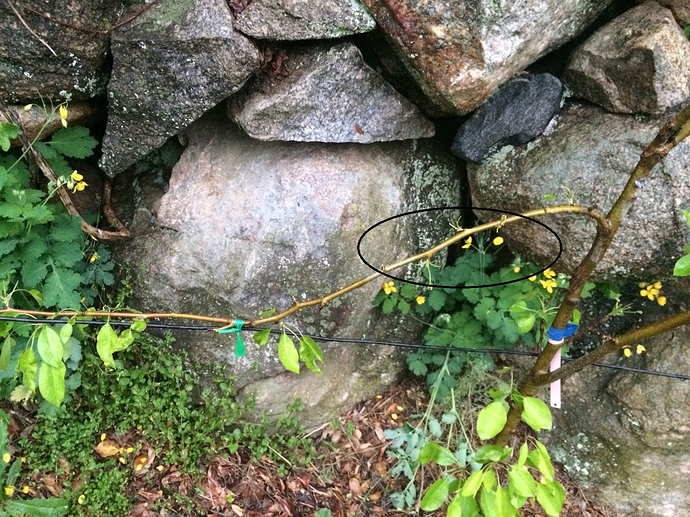 Bob,
The deer we have leave the branches looking like they have been cut with pruners on the tips at a slight angle. Never saw any just snack on leaves. I have had rodents such as small rabbits eat leaves only but not 5’ up.

lol My pears and cherries looked like that after deer ate mine last weekend.

On 9/6/14 I’m out weeding the two new Crimson Passion cherry bush plants I’d put in the ground on 4/16/14. It’s getting late and my wife yells out the door that she has supper ready. I drop everything and head in to clean up. We eat and then I sat down in front of the boob tube, and next thing I know I nod off. I clean forgot all about the fact that I’d left the little cages off the CP’s.

Next morning I’m drinking coffee and I glance out toward the cherry bushes and there are 3 does standing around one of my CP’s and it dawns on me that they are unprotected! I yell at the deer and they take off, and I trot over to see what damage was done.

On the one hand I was happy they just defoliated the branches and they hadn’t bit any off - on the other hand I was really worried that at this late date that the plant would have enough energy going into winter to survive the following spring. But it was fine. (Most of my experiences however are like Clark noted, and often they just bite a branches off and drop them)

The stripped CP is at the end of the CJ’s - the CP’s still haven’t flowered for me yet, so probably next year, but it’s grown a ton since '14 in spite of me… 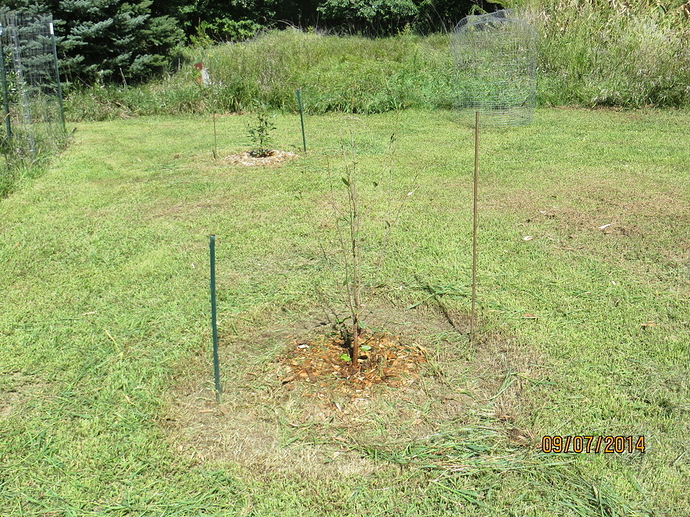 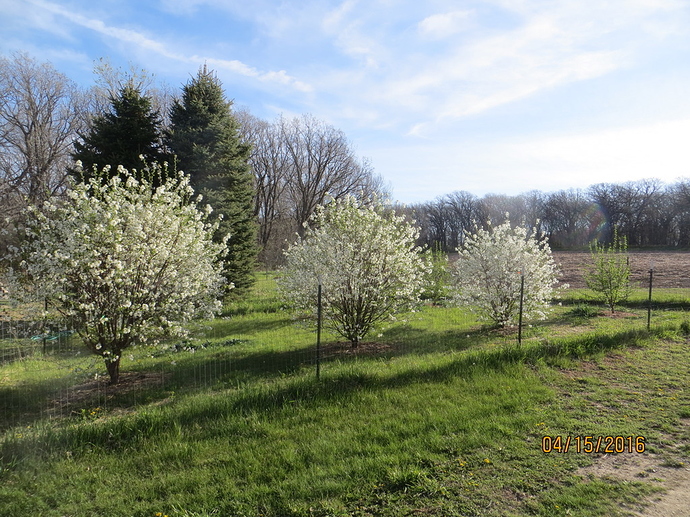 I’ve been examining them for bugs, but haven’t seen anything yet.

I have had rodents such as small rabbits eat leaves only but not 5’ up.

I wonder if I have some sort of climbing rodent doing this? None of the branch tips have been eaten (even relatively low ones, far under the 5.5’ top height I see the damage at), which would make sense if the animal was too heavy for the tips of the branches.

lol My pears and cherries looked like that after deer ate mine last weekend.

Did the deer avoid the branch tips for you?

On the one hand I was happy they just defoliated the branches and they hadn’t bit any off - on the other hand I was really worried that at this late date that the plant would have enough energy going into winter to survive the following spring. But it was fine.

Must have just put them into early dormancy. I had a potted apple (on M27) which I thought I lost last year when I didn’t water it enough in late August and it lost it’s leaves. It never re-grew anything in the next 2-3 months of growing season, but it surprised the heck out of me by coming back fine this spring with flowers and leaves. I just hadn’t gotten around to re-purposing the potting soil yet.

Did the deer avoid the branch tips for you?

In my case the deer only ate leaves. No wood what-so-ever. On the cherries they seems to eat everything in reach and on the pears they seemed to eat the leaves but not the stem.

I had same damage from groundhog on my young plum and cherries. Groundhogs are great climbers, so if there is something to climb on (even a fence that stable and not wiggling) they will climb on. I ended up to set a lose net fence around my bush cherries, otherwise beast didn’t leave them alone - it has something to their leaves in particular.

I had same damage from groundhog on my young plum and cherries. Groundhogs are great climbers

I’ve had problems with groundhogs eating fruit. This would be the first time they ate the leaves as well, but I suppose it is better than having deer find my yard (I haven’t yet seen any in my yard). I better get my traps out…

The groundhogs are eating my vegetables, melons, but only fruit really producing I have is peach, and they never bothered it. May be it is just too close to a busy yard area, and they are day feeders. They have two meals a day in my yard) 6-7 AM, and then 2-2:30 PM, never later. In between I can see them on my neighbor’s lawn) The good thing, when you done catching them (2-6 of them usually) they do not come back till next year. I started to plant “sacrificial” crop of beans around the area they come out(from other property) to see the damage to it before they got to the real garden. As soon as I see they fed on my sacrificial beans I start catching.

Bob. I bought a $50 game cam off Amazon and it’s worked well. That’s how I caught the deer munching my leaves. Takes pics and videos and you can set it to turn on and off at certain times to avoid it taking pictures of you mowing your lawn.

As far as i have seen they both nibble the leaves and chomp the twigs. In a few cases they have chomped chestnut seedlings down to the ground almost. i assume adult deer have the system to digest a twig whereas fawns may not. It may be a matter of how much other food there is, too.

I was thinking about groundhogs, too. My resident groundhog feed on leaves of my perennials mostly but has climbed my Mammoth sunflowers.

Deer in my neighborhood eat leaves and sometimes branches, left nothing soft like branch tips. They love tulip buds.

It’s deer! I have had the same thing here where it looks exactly as your pics and I do not have groundhogs around here. If it is groundhogs and not deer, should there not be claw marks/scratches on the trunk where they are climbing up? Sent you a PM.

I had a young Stella pruned to open vase then to a one sided open vase with the trunk ripped. I have had other trees just eaten like your picture too on the same day. The Stella will be easy to pick from the ground. The tree has recovered. Thanks to the no limit on doe tags our deer population has gone way down. The neighbor took twelve a couple years ago plus some that got mortally wounded. Then who knows what everyone else took. I still get some deer but not twenty at a time. I see the ground hogs thirty foot up in the mulberry trees where the branches go horizontal. These trees are leaning from past ice storms and are about fifty foot tall in some areas. The wildlife eat the berries before they are even ripe! I think they might not even know what I am growing. I’m scared they are going to figure it out, as in squirrels, ground hogs, coons, and birds.

Wow, those are nice size bushes! They say to grow them four to five foot apart. I think I’ll space them more out. How far are yours? How old are the big ones? Looks like your going to get a lot of cherries, good for you!

Johnny; I have mine on 12’ centers. I think 4-5’ apart would give you the hedge effect, probably something more like Clark has.

I have three CJ’s that I planted in 2011, and two that I planted in 2012. Right now I think the three first planted (And maybe all of them actually) are all pretty much bigger than I thought they’d ever be, bigger than the literature indicates they get anyway. I attribute that to U of S being like zone 2 and I don’t imagine they can predict with any certainty how things will grow in warmer zones until they’re grown there. Anyway I guess it’s a better problem for me to have than the reverse… The one in front covers up a similar one right behind him, and then the one directly to the right of the biggest one was also planted in '11. (There are seven bushes in that area including the two CP’s)

I trimmed the very biggest one down some but it’s still too big, and after this season I think I’ll bring it down some more. It has to be 10’ still or maybe more, again the fence is 5’. I think they get close to as big around as tall too, maybe not quite but I had to move my fence out some to get past 'em.

Yes there are a ton of cherries on all of them, as well as the ER, but oddly my North Star had a ton of flowers yet looks to have only set maybe 3/4 or a bit less. There’s quite a few blossoms shriveled up and no cherry. Never did see many bees and things around the NS, but apparently there were some.

It looks to me like what deer do to my trees. One branch here will get heavily hit, and the branch 3 inches over won’t be touched. They often leave the petiole on the tree. Petioles aren’t as tasty as leaves, probably. I know I’d prefer not to eat a bunch of spinach petioles.

Caterpillars eating that many leaves would leave obvious dark specks, or frass, either on the plant or on surfaces below the plant.

Thanks all- sounds like I need to check for scrapes to see if there is any evidence of climbers. If not, it sounds like deer. I guess I’ll need bigger traps for them