Is This Fire Blight Canker?

Here is a branch of my Asian pear tree. I scrubbed the black surface and see the green cambium layer. Based on the location, I think this comes from two years’ ago.

I can easily cut off this branch to the clean part. Here are just some questions: 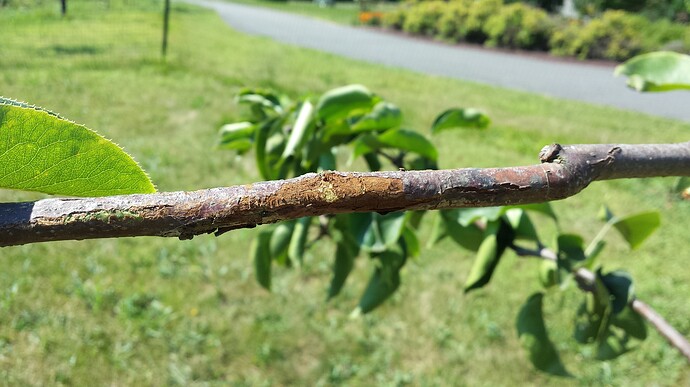 Looks like FB to me. The wound is a source of bacteria for infections in future years. I had a lot of blight on the trunks of two year old apple trees two years ago Some was so bad, I dug out the trees. In some cases, I cut the leader below the blight and pulled one of the laterals up to become the new leader. In some cases the tree died even after I cut the leader to remove the blight. Last year I sprayed copper at 1/4 green and strep ahead of each rain during bloom and almost no FB this year

Since this is an old wound, can it make it if this happens at the main trunk? Or the infection can spread the next year and eventually kill the tree? I can spray it with copper.

FB is very unpredictable. Some years its awful and some years I barely see it. My limited knowledge is based on a major outbreak I had several years ago on 800 apple trees. The outbreak just about wiped out the orchard before I got started. The year before the outbreak I only had a little and this year I had even less. I believe the copper helped this year and I know multiple applications of strep during bloom helped a lot. I

If it is not oozing it is probably a scar and not active. In that case it should be left alone.

There can be dormant bacteria in any fireblight wound. If you are having major problems it can help to remove (prune or scrape off) all wounds, or swab with alcohol etc. I had a pear this year which I did not completely remove all the branches from and it spread badly later in the summer. I need to go out and check it again to make sure I finally got it all.

Scott. I leave them be and haven’t noticed a correlation to future infection. Is this just a matter of opinion, or do you, as is often the case, have research that suggests surgery is the best course, no matter what? Our anecdotal samples are so small.

Here is some info from Penn State concerning canker blight:

Infection - Canker blight!
Canker blight is often a head scratcher and, consequently, grossly underestimated for its ability to cause damage in the orchard. Canker blight develops due to renewed activity by the bacteria at the margins of overwintering cankers from the previous season and occurs regularly every year where the disease is established. In other words, if cankers are left in your trees, you can count on canker blight. The first symptom can be detected by cutting into the bark at the canker margin where you will see a narrow zone of water-soaked green or diffuse brown tissue at the margin between the necrotic tissue of the canker and the surrounding healthy bark. The bacteria move systemically from the canker into nearby growing, succulent vegetative tissue. Often times, water sprouts close to active canker sites will develop a distinct yellow to orange color and begin to wilt. Canker blight symptoms are often overlooked because of their similarity to the more familiar shoot tip (shoot blight) infections that occur later. Another distinct feature is canker blight “shoot blight” will appear as if the infection is starting from the base of the shoot, as opposed to the shoot tip, which is characteristic of typical shoot blight. In years when blossom infection events do not occur or have been well controlled, active canker sites serve as the primary source of bacteria for a continuing epidemic of secondary shoot blight infections that can lead to major limb, fruit and tree losses. Such sources of bacteria can also be important for new orchards with no history of fire blight when they occur in older, surrounding orchards from which the bacteria can be moved into young orchards by wind, blowing rain and certain insect species.

Alan, I also am not particularly religious about pruning out blights. But when infection is bad it seems to help. Most of the University extension pages mention the importance of removing old cankers. Here is a book Google picked up which has some data: they mention only 10% of overwintering cankers have viable bacteria for a new infection, and that a canker doesn’t need to be oozing to have live bacteria in it.

My guess is if you don’t have bad weather conditions and susceptible cultivars it doesn’t matter as much whether the cankers are removed. But removal does help in some cases. On my pear the fact that all the FB I have had in my pears this year is in this one tree makes it pretty clear it is infecting itself in other spots from previous strike cankers.

When you say “removal”, I assume you cut off the FB infection, down to the wood.

This is fine if this is just a small scar. But if the infected part is 1/2 of the main trunk, then this may kill the tree. For the side branch, we can just cut it off and do not need to clean it.

On a big trunk you can cut off the bad bark and douse whats left with alcohol if you want to be safe. Its similar to black knot on plums: the disease attacks the surface bark that is growing, not the wood below. So, removing the bark will solve the problem. The alcohol is for insurance.

Note I hardly ever do anything on trunk FB anymore, the disease is not a big problem for me. Several years ago it was really bad and I was much more thorough about removal.

Fireblight is best combatted by growing highly resistant varieties of fruit. It’s a lesson I’ve learned the hard way through the years. Copper spray, vinegar, alcohol, burning, antibiotic, pruning etc is all reactive but the proactive approach is long term the best solution. I top worked many types of susceptible pears over to Douglas, kieffer, etc. so far so good this year.

Note I hardly ever do anything on trunk FB anymore, the disease is not a big problem for me. Several years ago it was really bad and I was much more thorough about removal.

@scottfsmith Can you pls say more about this? Do you leave blackened areas of trunk alone?

I don’t get those big baddies any more … just a few tip strikes. After I removed my quince, euro cider apples, and other blight-prone apples, the tables turned in the battle.

I in fact re-added a few that were bad but were not Euro cider or quince… I re-added Canada Reinette and Orleans Reinette, and no FB problems there either.

It sounds like you may have too much wild inoculum in the area with all the Bradford pears, so it may be hard for you to get to the state I am at.

Thanks Scott. Yeah this is a tough area. Tomorrow I take my saws up to another friend’s house where my 8 year old Myers Royal LT benchgraft on G 30 has a big blackened area down near the soil. Damn. That was her best apple- a fabulous taste when well ripened. I’m tempted to just carve out the black and see what happens. Buys time to break my friend into the idea the tree may be a goner. No blight up top! Just- bam one big trunk strike down low. That makes no sense to me.

@scottfsmith If you see a blight canker on a branch do you then assume that everything on the branch above the canker is also infected with blight and you need to cut off the branch below the canker (versus just shave the canker down to good wood and leave the branch?)

Many times I see no sign of blight on the branch above a canker.

Many times I see no sign of blight on the branch above a canker.

I’ve had plenty of cankers I didn’t remove dry up when I’ve lots of strikes in an orchard and my clients don’t have a bottomless money well.

Asking advice from others about FB comes with certain risks, the disease is unpredictable and behaves on variables impossible to accurately gauge, at least for me.

I wouldn’t remove a scaffold branch because of a lower canker, unless the branch already showed at least some sign of FB further up- maybe some shoot blight. But it all depends on how trees in the orchard are responding as a whole and how great the threat seems.

Here, FB just hasn’t been fatal for apple trees on the vigorous root stocks I use.

I think it establishes its beachhead in small wood or blossoms and then travels by the vascular system to other sites, without necessarily multiplying everywhere it goes (infecting everything along its way), sometimes it works right into big wood and other times settles around the bark and never penetrates the big wood at all.

But it’s a real good question and all I have is anecdotal evidence. Scott has already stated that he can’t tell when big wood infection will lead to tree death, and neither can I. My experience with that is only with pears, though. I’ve never lost a scaffold branch of an apple to FB.

For decades I have thought cankers to be self-contained, get rid of the canker (but leave the branch), job done. Am doing blight surgery in next few days and hope to clear this up before deciding how much to remove.